Amidst the buzz of Japan’s victory over Germany, it appears that there’s someone very unexpected stealing the spotlight.

Recently, an usher for the 2022 World Cup in Qatar went viral for his amusing yet effective way of directing fans to the nearby metro station after the matches.

His actions earned him much attention and even free merchandise from his employers.

In a TikTok video posted by @mozzartsport on Wednesday (23 Nov), a man sits on a high chair as he ushers football fans to the metro station.

Donning a large foam finger, he chants the word “metro” on his loudhailer earnestly.

His simple ushering method seems to attract many people’s attention, as a crowd gathers before him, cheering him on.

He cracks up behind the foam finger before resuming the “metro” chants for his newfound fans. 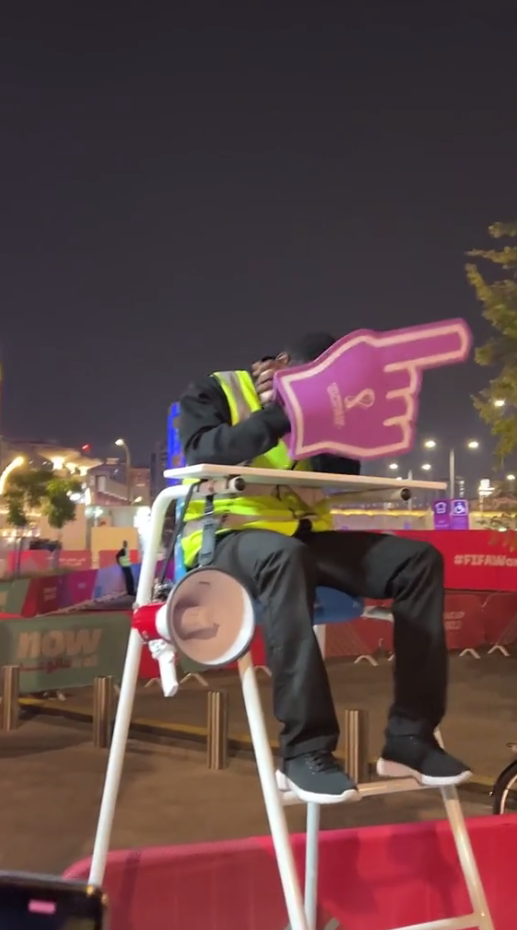 The video has since garnered over 9.4 million views and 1.2 million likes, with many calling him the “Metro Man”.

With the amount of support he received, he has even decided to open his own TikTok account which now has over 40,000 followers.

In a video, he thanks the fans for their support, telling them to “keep sharing, keep posting and keep commenting”.

As it turns out, the man’s efforts in making a boring job more entertaining did not go unnoticed by his employers.

In another TikTok video posted by user @pdretorbar, the man is seen receiving several World Cup merchandise in a mini ceremony.

He smiles widely as he receives the gifts, which include a football, a jersey and a backpack among other items.

A netizen even jokes that the “Metro Man” is now more famous than Argentinian footballer Lionel Messi.

Another quips that fans came to Qatar to watch him instead of the World Cup.

Many agree that he deserves the rewards, as he “make[s] a lot of people happy” with his antics.

Hope he continues with his enthusiasm

Seeing the man interact with fans and indulge in their amusement at his actions is certainly an inspiring and heartwarming sight.

The World Cup gifts he received were definitely well-deserved.

Hopefully, he’ll continue having a good time at his job, and perhaps we’ll see more him on duty for the upcoming matches.

Featured image adapted from @mozzartsport on TikTok and @pdretorbar on TikTok.

S’pore Woman Gets Electrocuted While Setting Up Fairy Lights, Reportedly Saved By Her Crocs