Tampines residents who were tuning into the People’s Action Party (PAP) rally last night (3 Jul) would have noticed Mr Masagos Zulkifli predicting an unexpected candidate as our Prime Minister.

Here’s the short 0.16 second clip in full, reuploaded on Facebook after the original video was taken down shortly after netizens discovered the blooper.

Here’s the transcript of the clip:

And last year during the National Day Rally, our Prime Minister, Mr Lee Hsien Yang pledged $100 billion to be spent over the next century. To build slowly, and to learn how to fortify Singapore, at the same time to beautify…

Mr Masagos has also since clarified the incident, sharing that LHY used to be his “boss at Singtel”. 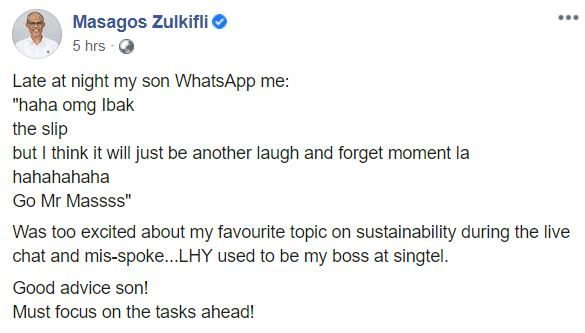 The Tampines GRC candidate now wishes to focus on the “tasks ahead”. We summarise the story below.

On Friday (3 Jul), PAP’s vice-chairman Mr Masagos Zulkifli had been participating in an online rally as part of Tampines GRC campaign efforts.

We also have a plan in Tampines

Long hours of rallying & campaigning aside, we know our GE2020 candidates are probably clocking late nights to prepare their speeches.

We hope they are able to get ample rest so that they can continue to deliver their points across.

Regardless of the reasons behind this faux-pas, there’s only one thing that remains clear — We also have a plan in Tampines.

What do you think of Mr Masagos’ accidental prediction on the identity of our ‘Prime Minister‘? Let us know in the comments below.