‘Memedef’ – a local army meme page – has taken a break from their “usual programming” to write a PSA for all National Servicemen Full-time (NSFs) “on the topic of mental health”.

What triggered their passionate response?

A polarising rant on Insta-stories by a female participant of the recent Women’s Army Boot Camp, who got a glimpse of army life in a 2D1N experience.

Here’s their post in full, we discuss the crucial arguments they’ve made below. 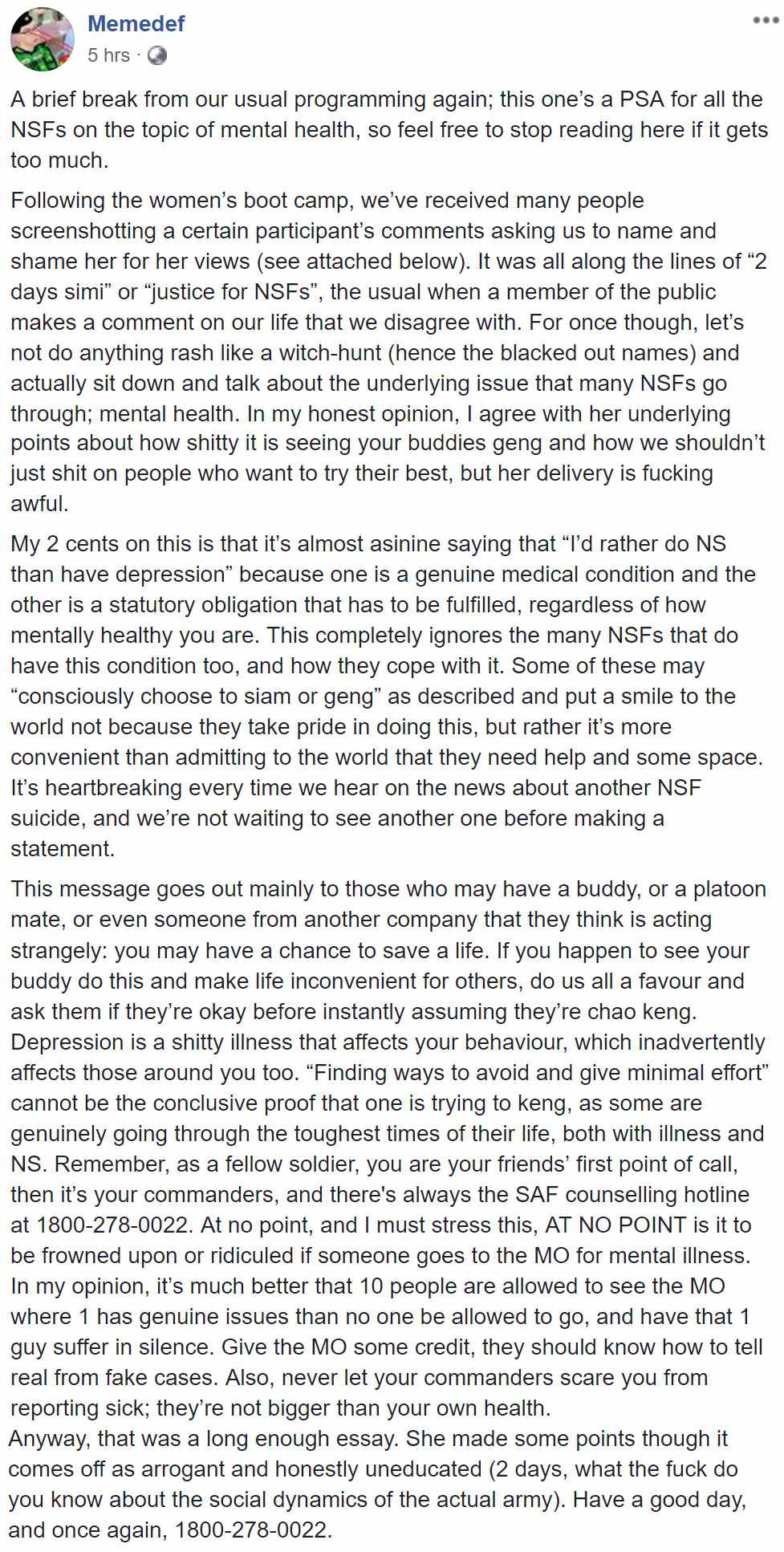 “Men who complain about NS are the worst”

Let’s first take a look at the insta-rant that launched a thousand netizen DMs to Memedef.

The participant of the female’s boot camp began with a strong opener,

Men who complain about NS are the worst. 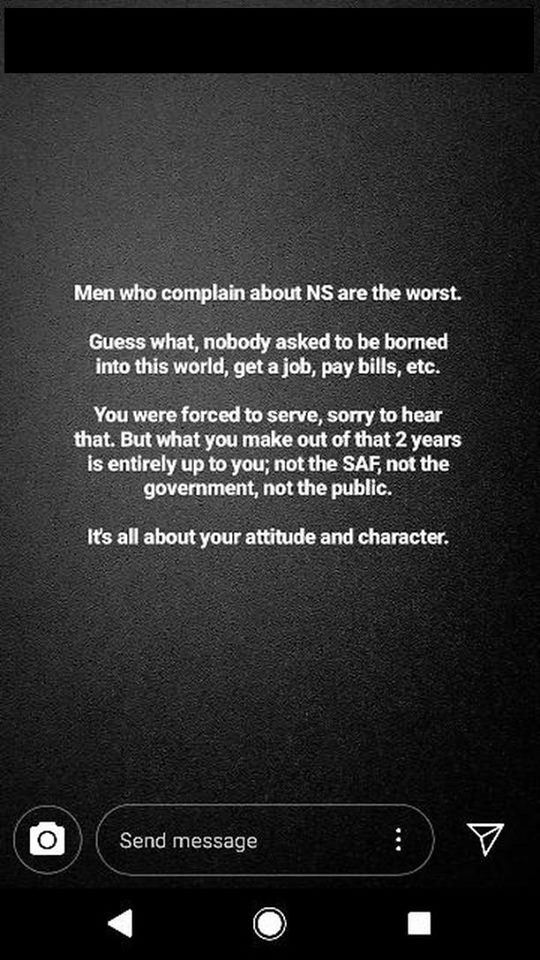 Although NS is compulsory, she thinks that what a serviceman makes out of his 2 years of service is “entirely up to” him.

She believed it was “okay to rant” about NS being “shitty, but she called “finding ways to avoid” NS or putting in “minimal effort”, disgusting behaviour.

And claimed she would “trade depression for NS anytime”, having lost 2 years of her youth to the condition.

To her, people who made “life difficult for others in NS”, “consciously chose to siam and geng whenever they can”, and those who “complain(ed) and shit on people who expressed interest in NS” were undeserving of respect.

This was her description of servicemen & women whom she fully respected,

Those who served the nation with THEIR best (physically, mentally, personal problems and all).

Netizens did not respond well to the rant and took to Facebook to ask Memedef to “name and shame” this participant for her views.

Memedef took the high road instead of engaging in a “witch hunt”, turning her rant into a timely discussion about our soldiers’ mental health.

The writer first agreed that it did feel “shitty to see your buddies geng”, and we shouldn’t disparage “people who want to try their best” in the army.

However, he quickly pointed out that placing NS and depression in an ‘either/or’ situation was like comparing apples to oranges.

One is a genuine medical condition and the other is a statutory obligation that has to be fulfilled, regardless of how mentally healthy you are.

NSF suicides is a real issue

Memedef touched on the fact that it’s also “heartbreaking every time we hear…about another NSF suicide” — and we shouldn’t wait for the next case to make a stand on the issue.

The writer called on NSFs to look out for “a buddy, platoon mate, or even someone from another company” who may be acting strangely.

We all may risk passing up “a chance to save a life”, by assuming that they’re “chao keng” immediately.

The toughest times of their lives

Readers were also advised to support NSFs wholeheartedly as they were going through the toughest times of their lives.

Memedef added that it wasn’t appropriate to “frown upon or ridicule” someone going to the Medical Officer (MO) for mental illness,

Better that 10 people are allowed to see the MO where 1 has genuine issues than no one be allowed to go, and have that 1 guy suffer in silence.

After all, MOs are trained to differentiate between real and fake cases.

Everyone can help a fellow soldier by being familiar with the resources available:

More than a “chao keng” mentality

The problem here is getting society, the army system and the NSFs themselves, to recognise it as a pressing issue to solve — rather than dismissing it as a “siam or geng” mentality.

We think Memedef summed it up nicely with this quote,

Never let your commanders scare you from reporting sick; they’re not bigger than your own health.

They’ll surely be accommodating if it’s a genuine health risk — at least, way more understanding than the netizen behind this rant.