Heavier punishments will be meted out for mosquito breeders.

Dengue cases in Singapore are increasing at an alarming rate, having reached 15,270 as of Wednesday (8 Jul).

While some dengue teams have made macabre discoveries like human remains, others just make disgusting finds – like a whole water feature filled with mosquito larvae on its surface. Check out the video here: 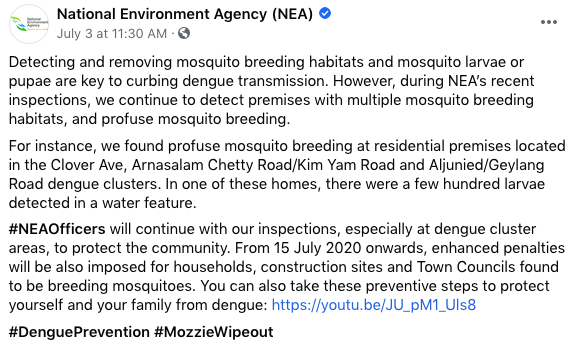 It was found at a home located in one of the dengue clusters around Clover Ave, Arnasalam Chetty Road/Kim Yam Road and Aljunied/Geylang Road.

At first glance, netizens can already spot the mosquito larvae squirming in the stagnant water. According to the post, this “water feature” alone was filled with a few hundred larvae, too much to even count.

The NEA’s intention through the post was ostensibly to shed light on the urgent need for citizens to be on their toes, and detect and remove such mosquito habitats, as dengue persists to plague the nation.

This water feature was not the only breeding habitat found during inspections. In fact, it has also uncovered pails and even a jacuzzi filled with growing mosquitos.

To keep dengue in check, the NEA is introducing heavier punishments for those found breeding mosquitos at home from 15 Jul onwards.

It will also continue its inspection and community outreach efforts.

Look out for mosquito larvae

Going by the worrying trend, Singapore’s dengue cases have the potential to reach an all-time high in 2020.

Citizens are hence encouraged to do their part by frequently clearing stagnant water in locations like flower pots and bamboo holders and alerting those around us to do the same.

Find out more about how to help here.