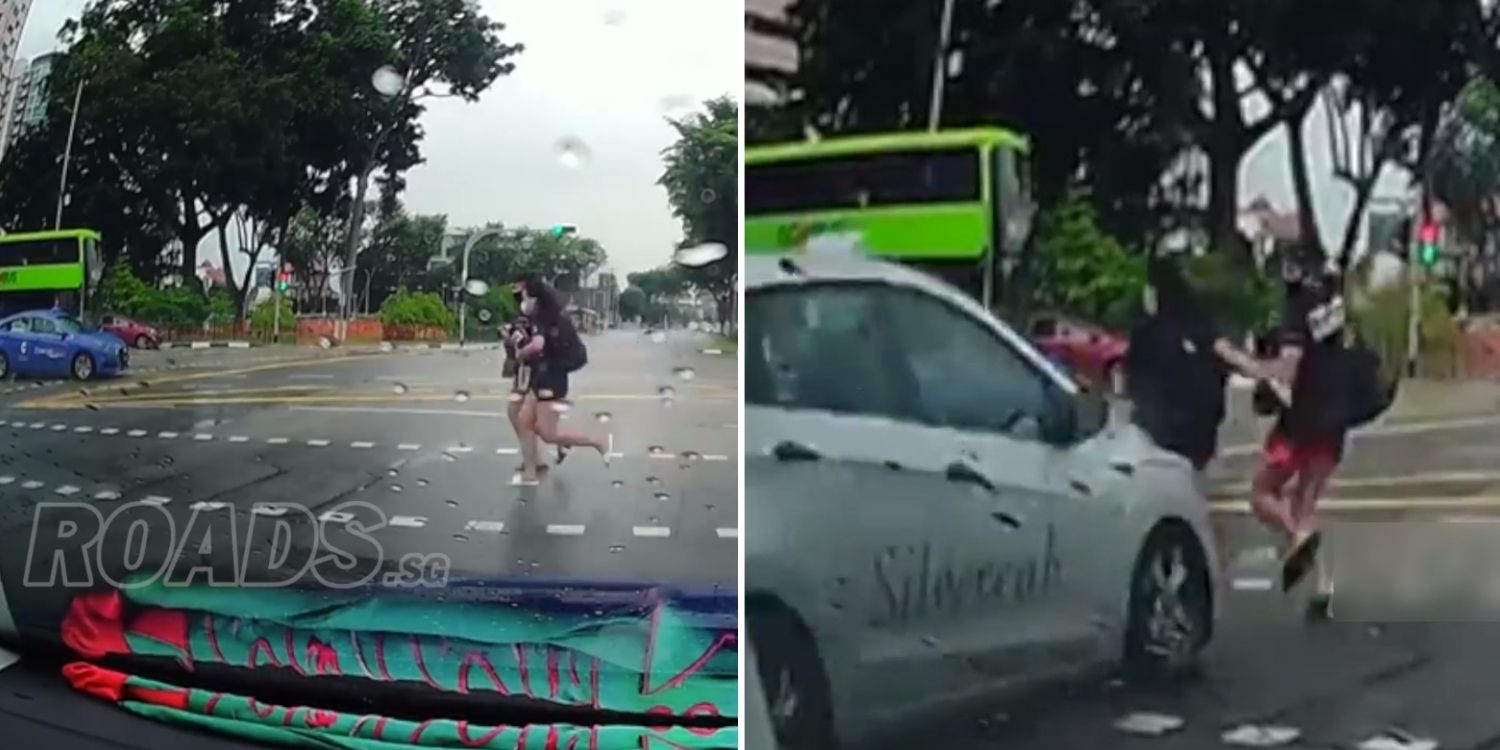 When crossing the road, we always remember to look left, right, and left again, but the foremost rule may slip some people’s minds.

2 pedestrians in Paya Lebar forgot to check for the green man before crossing the road today (1 Oct), resulting in an unfortunate accident.

Though the direct impact was on them, netizens who watched the footage expressed pity for the driver instead.

Facebook page ROADS.sg shared dashcam footage of the accident on Thursday evening (1 Oct). Since the clip may be disturbing for some, we advise watching at your own discretion.

The beginning of the clip clearly shows the traffic light indicating green for vehicles going straight, while the right-turning arrow was red.

The vehicle with the dashcam, hence, was stationary, while the lanes to its left were empty, possibly because no vehicles were passing yet. 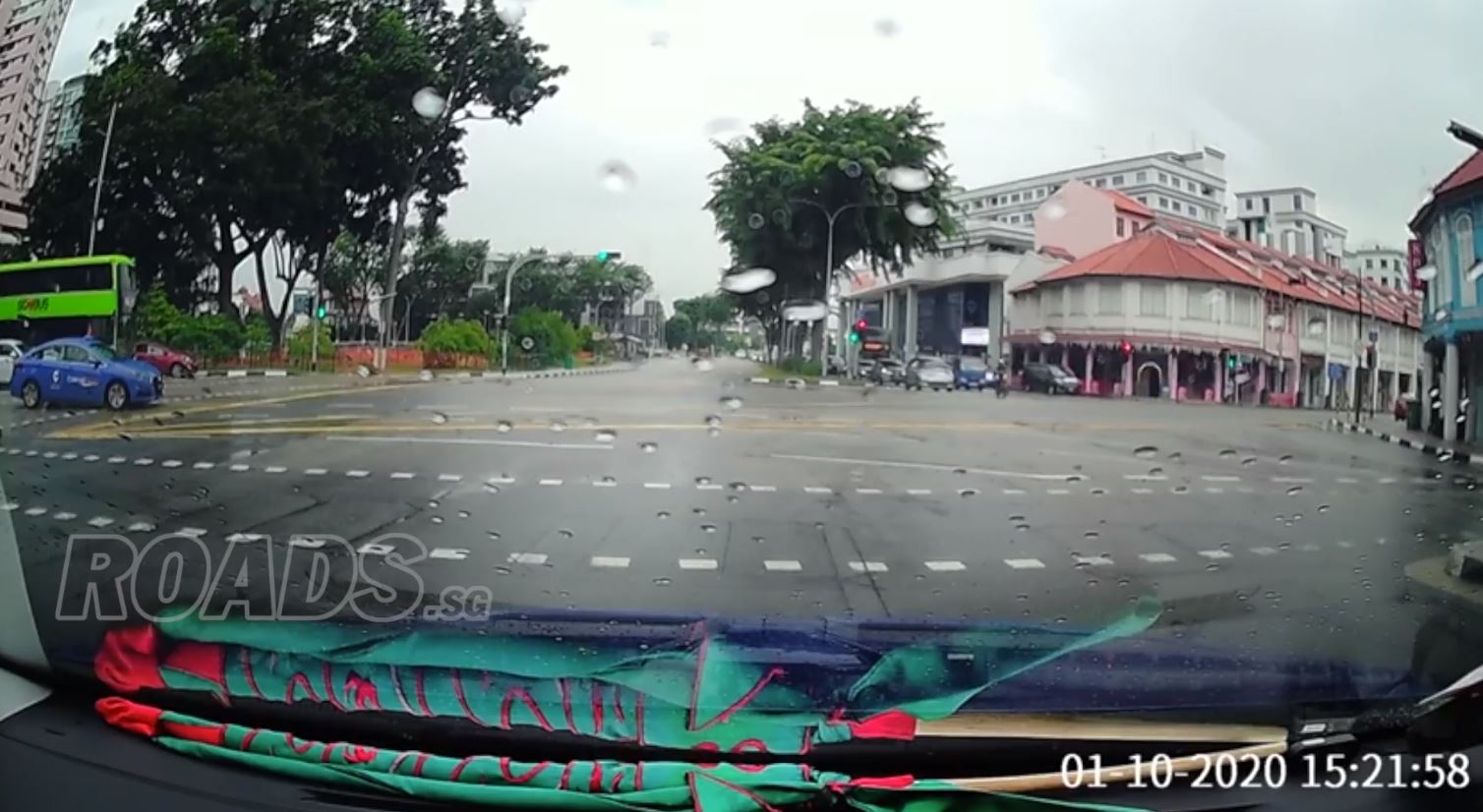 As vehicles on the carriageway diagonally opposite started moving, a man and woman emerged from the right side, walking along the pedestrian crossing. 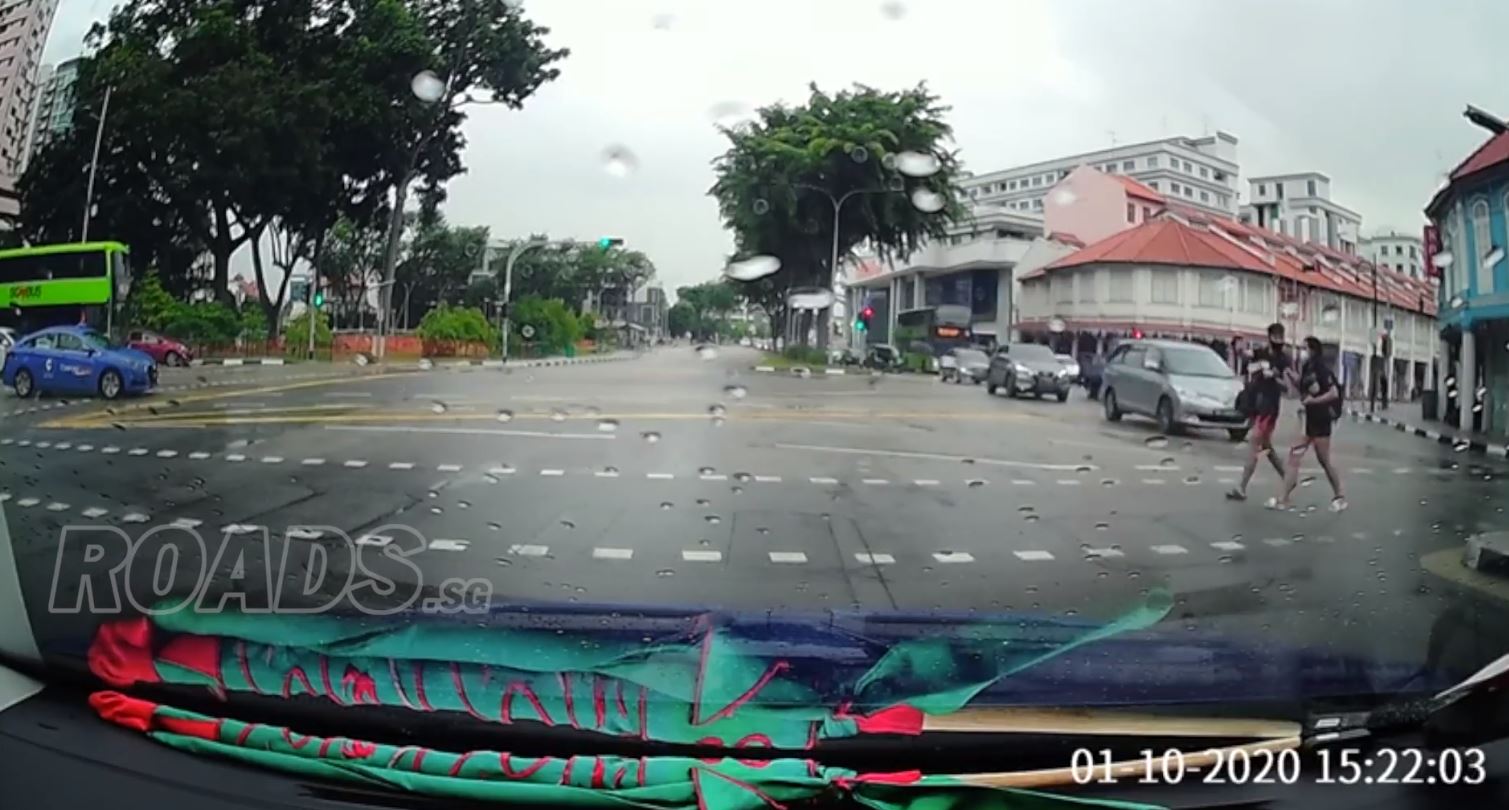 Perhaps only then realising that they had mistakenly crossed at the red light, they picked up their pace and started jogging across.

Making their way across the rightmost lane was not an issue, as the vehicles were already stationary while waiting to turn.

Once they reached the center lane, however, things took an abrupt and heart-stopping turn. 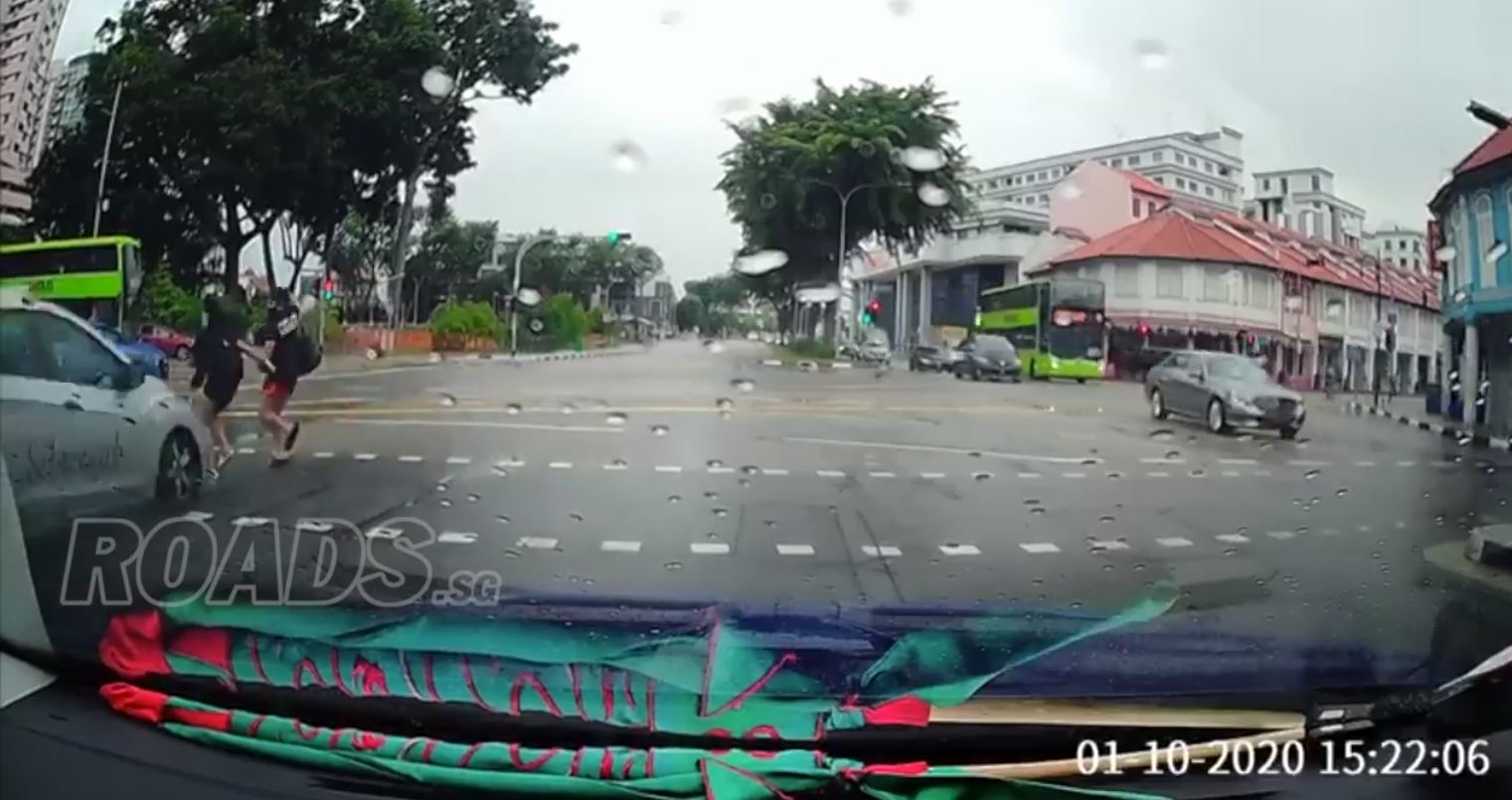 As an oncoming taxi driving straight ahead approached, the woman pulled the man while rushing forward, possibly thinking they could outrun it.

Unfortunately, the impact was too quick and strong that it sent both of them flying. 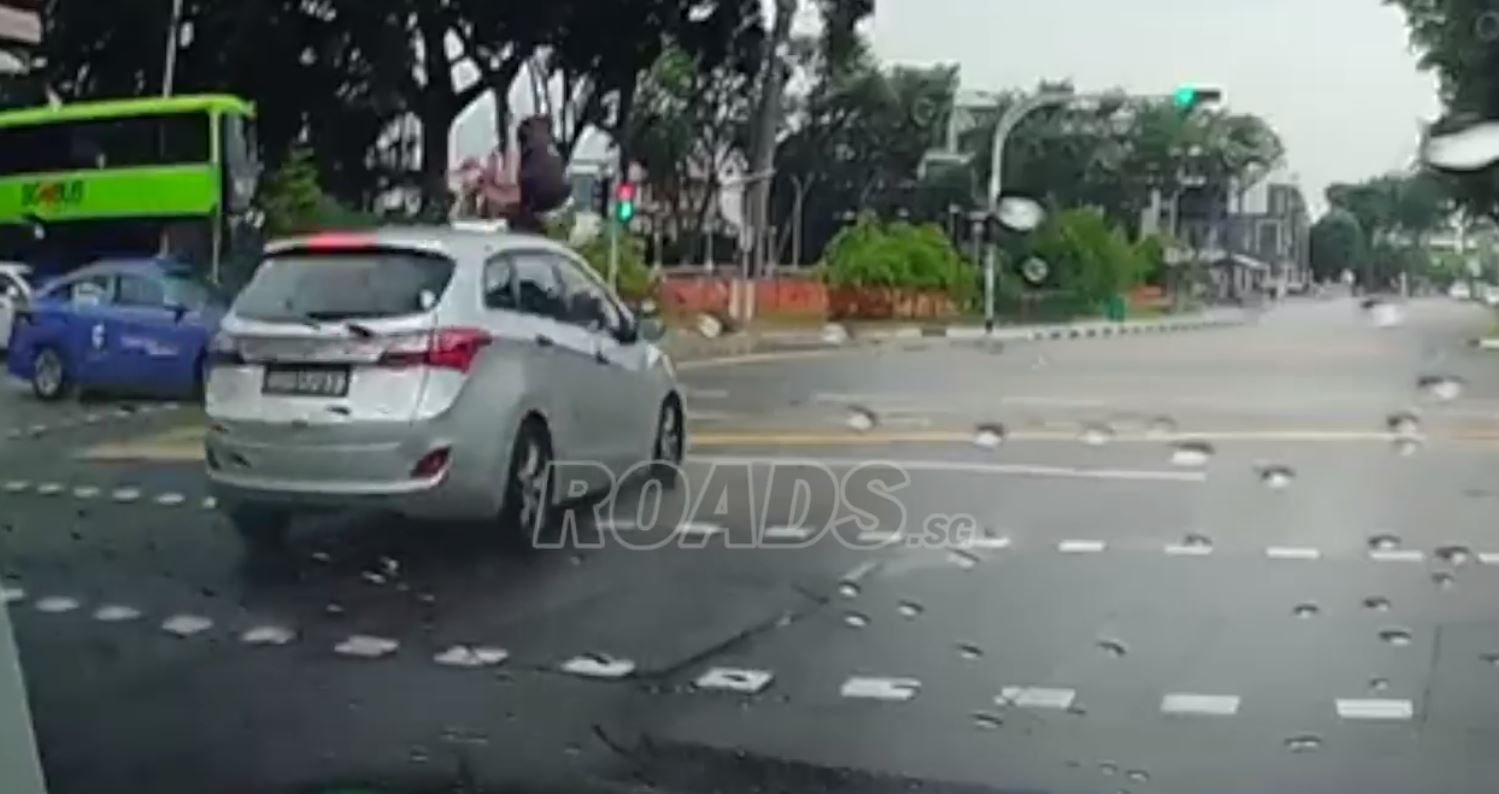 The taxi promptly stopped a little further ahead, and the driver got out of the car to check on the pair. A lady who exited from the passenger side also ran over to help.

Netizens noted that this wasn’t the right protocol, as drivers should leave their cars in the same spot to protect victims from other vehicles.

Nevertheless, the driver did the right thing by stopping to help.

Man got up after impact but woman didn’t

Before the taxi driver brought his vehicle to a stop on the road shoulder ahead, the clip shows the male pedestrian getting up, seemingly alright.

He later appeared to crouch over his companion, who was down the entire time.

He also conversed with some motorcyclists who stopped to help pick their items up from the ground, and the driver who approached. 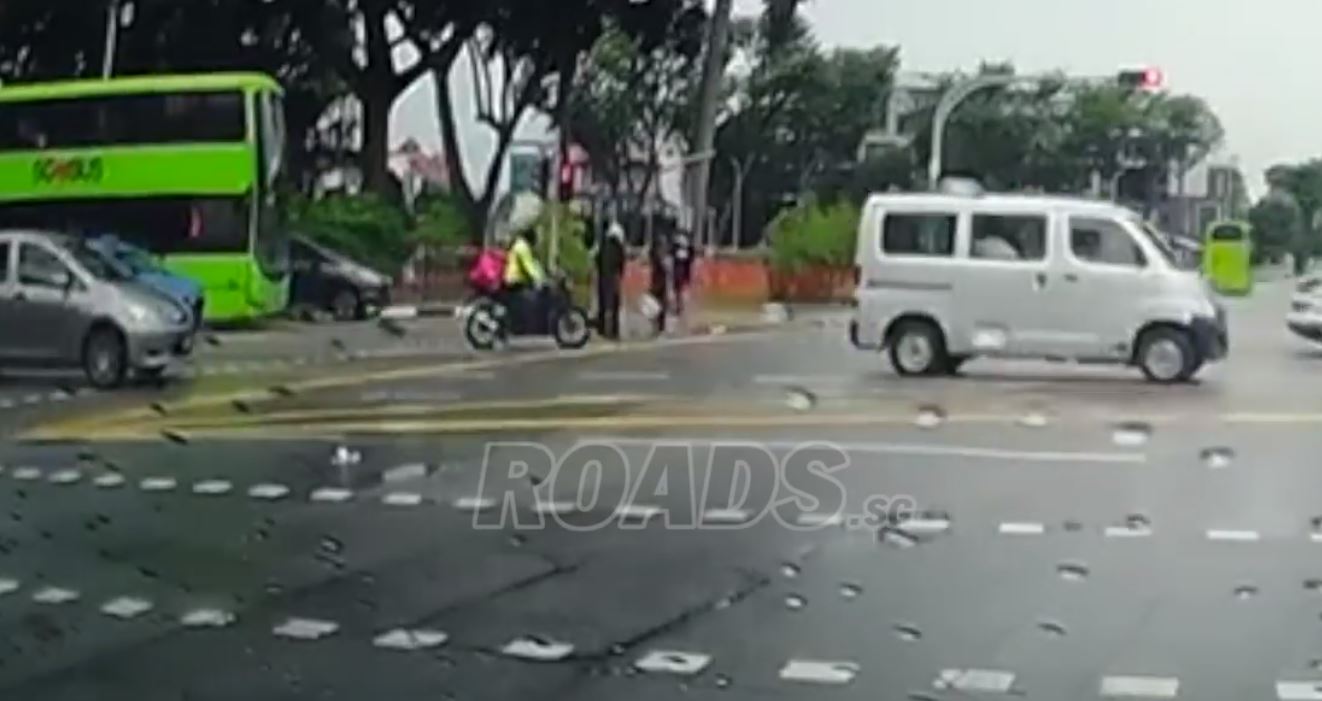 How that exchange evolved is unclear, as the video ends there.

Despite the shock of the incident and genuine concern for the pedestrians, netizens had the taxi driver’s feelings in mind too.

After all, the traffic lights clearly gave him the right of way, and he most likely would not have noticed the pedestrians due to the line of stationary vehicles in the right-turning lane.

While some expressed their sympathy for the pedestrians too, those came with a fair warning to be more alert while crossing the road.

MS News has reached out to the Singapore Civil Defence Force (SCDF) for further information on the accident.

The major junction intersecting Paya Lebar Road with Geylang Road is known to be busy, with vehicles going in multiple different directions.

Hence, pedestrians and motorists alike should always be on high alert when crossing such junctions.

In general though, this incident is a painful yet necessary reminder for everyone to take road safety seriously.

We hope that both pedestrians will be alright, and wish them a smooth recovery.