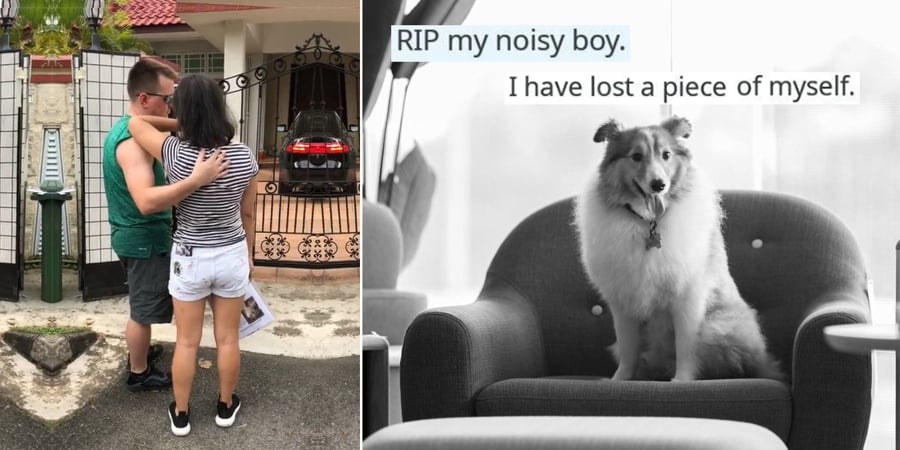 After searching tirelessly for a missing pooch named Prince, weeks of worry have finally ended in some semblance of closure for Matt and Elaine.

Here’s what Matt – Prince’s other hooman – had to say on Reddit this Wednesday (9 Jan) in the aftermath of the Platinium Dogs Club saga. Prepare your tissues, this is going to be a rough ride for animal-lovers.

Matt begins by acknowledging an impossible wish — that the late Prince could be right next to him.

He shares that Prince was his best friend in Singapore. The 7-year-old Shetland sheepdog was “always there” when he needed a hug, greeting him excitedly when he came home.

Matt then apologises for being unable to prevent the unfortunate passing of his beloved companion,

I miss you so much already and I’m sorry I wasn’t there to protect you.

Affirming that he still felt Prince’s presence even in daily routines, he quips,

You will always be in my heart. Every time I open a can of drink or sneeze, I will always pause, waiting for you to bark at me.

Prince was also a calming presence in the household, even acting as a mediator when Matt had disagreements with his partner.  In Matt’s opinion, the dog even single-handedly kept him “out of trouble” with Elaine.

Surprisingly, Matt doesn’t harbour any ill-feelings for anyone who may have caused Prince’s death. He now feels more “confusion, anger and sadness than hate”.

To Matt, hate is an emotion that “doesn’t help”. 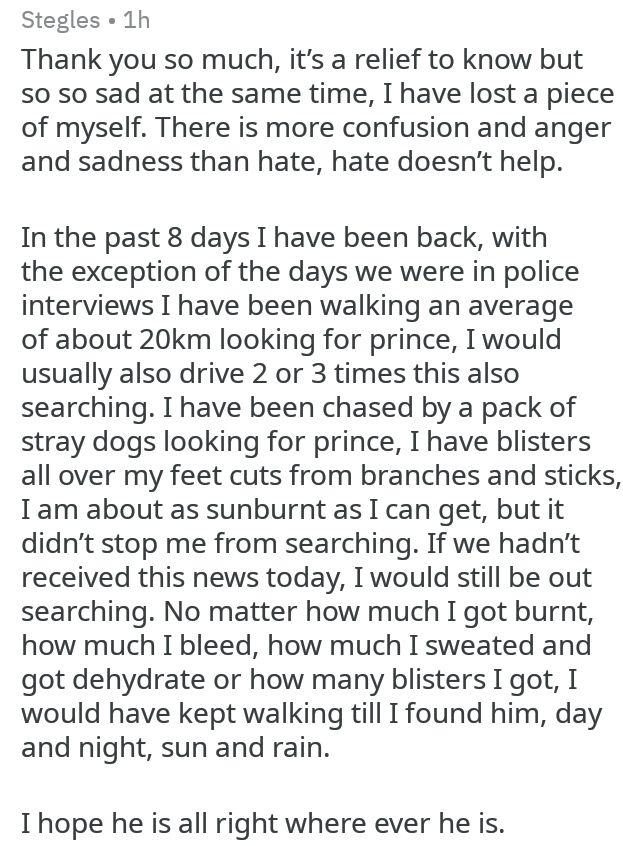 Since he’s been back, 8 days upon his return have been spent searching for Prince.

Excluding time spent at the police station, Matt described his relentless routine — walking an average of 20km every day, while driving 2 or 3 times this distance searching for his dog.

An encounter with a pack of stray dogs, blisters on his feet from broken twigs, and severe sunburn aside — nothing hindered his commitment to finding Prince.

If we hadn’t received this news today, I would still be out searching. I would have kept walking till I found him, day and night, sun and rain.

Hopes to get Prince’s tag & collar back

Matt is hopeful about a possible reunion with his dog someday,

I hope you have found your way to a big open green field where I will find you one day.

But as the loss of Prince remains fresh on his mind, Matt describes tearful returns to the Reddit thread to read his own post.

He elaborates that AVA has more or less confirmed that there’s “no doubt that Prince was cremated”.

Matt and Elaine simply hope to get Prince’s tag and collar back, but they fear it may be gone along with his leash, harness and bowls.

Thanking everyone for their “kind words of support and hope”, the couple says they are truly touched by the gestures.

Finally, he calls for patience as the authorities continue to investigate the case. Matt trusts that they’ll “take appropriate action”, and the couple will continue to assist the police & AVA by clarifying details of the case.

Little to no red flags

In response to whether the situation could have been prevented, Matt shed a little more light about their experience.

Elaine and Matt had both visited the boarding house twice, and spent a “fair bit of time talking” – presumably to the staff – but found no “real red flags”. All the dogs had also seemed friendly during their visit.

He admits that he has theories on why “what happened, happened”, but he would leave it to the authorities to report on the details, after investigations are complete.

As Prince lived out the final moments of his life, we’re sure he remembered only the good times. Most of all, we believe that Prince knew he was loved. And that his untimely passing will not be forgotten anytime soon.

That’s the only way we can turn this tragedy, into a powerful force for change, for good.

Our condolences, Matt and Elaine. Words cannot fully express how sorry we are for your loss.

You can leave your well-wishes for the family here, and sign this petition if you believe in stricter punishment for parties found guilty of animal abuse.