It's not because he's Chinese.

While netizens rallied behind driver Mr Kamaruzzaman, the unwitting star of the video was clearly the passenger, Ms Jovina Choi.

We understand how upsetting her actions could have been for viewers, but a clearly angered citizen decided to file an actual online police report, which he shared on Facebook.

Unfortunately, this didn’t go down so well with netizens, who simply urged him to move on.

Dangerous misuse of the word “kidnap”

The absence of a signature from the officer recording the report has caused some netizens to question its validity.

But others would know that this is what an online police report filed via SPF website looks like.

Formats aside, the content was what caused netizens’ anger, and we’ll summarise after the jump. 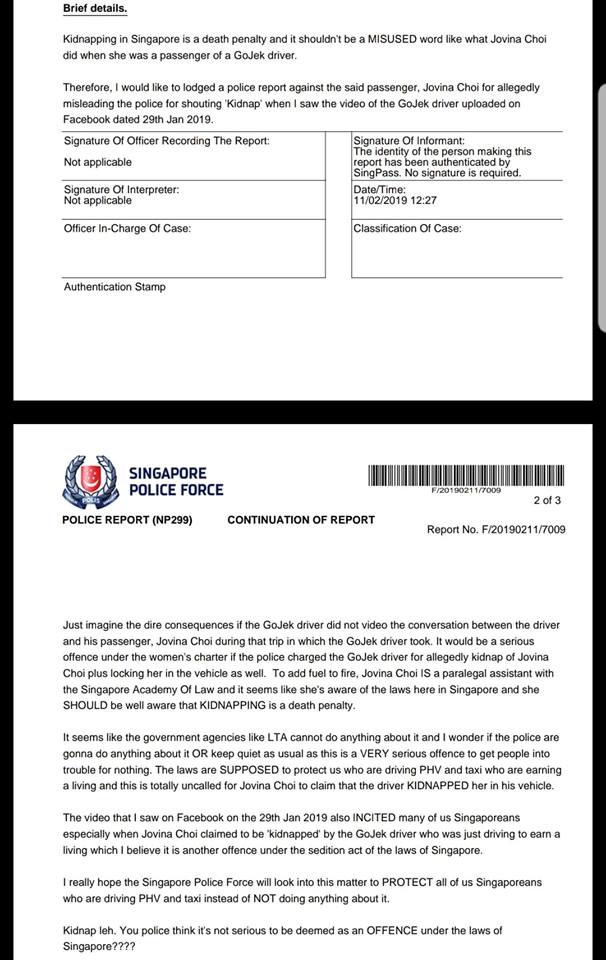 The report was mainly focused on attempting to criminalise Jovina Choi for misusing the word “kidnap”.

The man highlights how kidnapping is punishable by death, and therefore Jovina’s accusations had placed Mr Kamaruzzaman’s life in danger.

While netizens criticised the man for writing the report, some acknowledged the validity of the points he raised.

Most agreed that Jovina’s actions compromised the Mr Kamaruzzaman’s integrity and could have put him in a precarious situation.

Wrongly accusing him of ‘kidnap’ could lead to him being charged for a serious crime he wasn’t guilty of.

Ultimately, the man’s intention is to help Mr Kamaruzzaman, a sentiment earlier made by many who had signed the Change.Org petition seeking leniency for him.

Most good intentions to help people in need tend to garner a flurry of positive reinforcement.

But not everyone reacted positively to this man’s report.

Some chided him for not keeping the report confidential, accusing him of merely seeking attention.

The man stepped forward to clarify that he sincerely wanted to help, but netizens’ opinions about his method of doing so are mixed.

Perhaps in a bid to simmer down the tension, one netizen simply advised the man to quit pursuing the matter.

Whether the police report was really filed or not, there’s one simple lesson to learn from this saga.

Keep all legal matters private and stay out of other people’s business unless you are directly involved.

Let’s bear in mind the potential consequences of our actions, the next time we have the urge to react to something viral online.