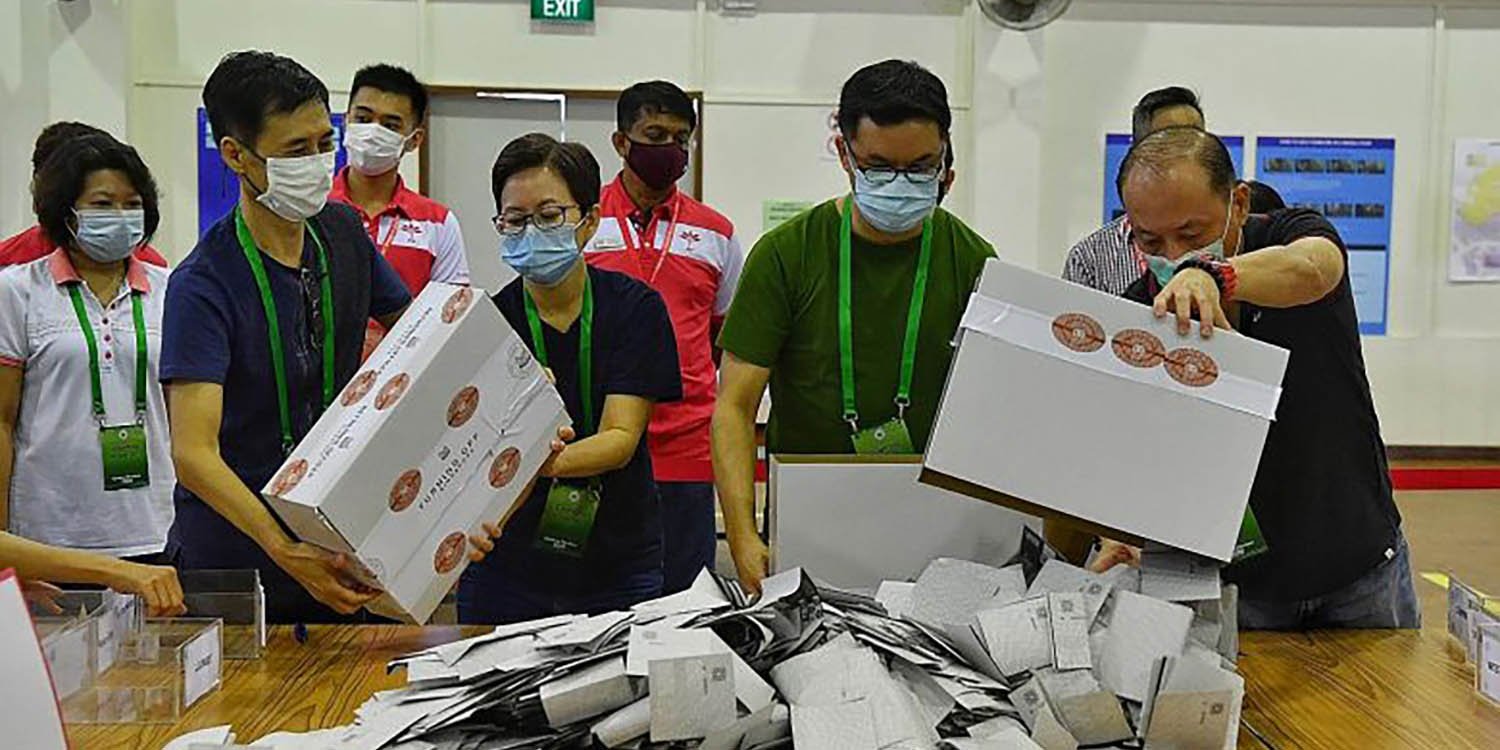 They also got along with their PAP counterparts.

It is important for any democratic system to have checks and balances in place. This not only ensures impartiality, but also prevents any form of manipulation.

For GE2020 that just concluded recently, one of these checks came in the form of polling agents. 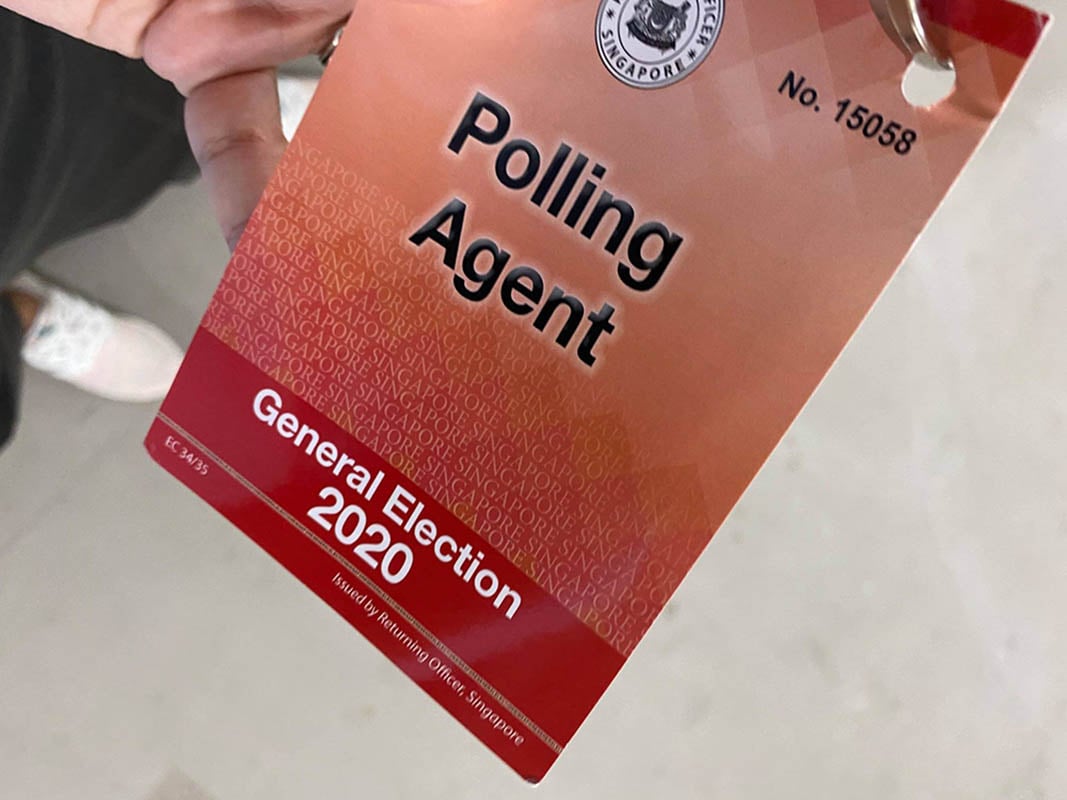 2 polling agents shared their experiences during GE2020, and concluded that the process was important for upholding democracy in Singapore.

Polling agents from parties are there to ensure that there is no tampering of the voting process, according to ELD.

They observe the work of the election officers and make sure that no funny business occurs.

PAP polling agents have the job of striking names off the electoral register, but it must be bought by the party from the Elections Department.

As Mr Loo’s group of volunteers didn’t know this, they didn’t manage to get one.

In his Facebook post, Mr Loo – a WP polling agent at East Coast GRC – pointed out the difference in reception between DPM Heng’s and WP candidates’ arrival.

Mr Loo noted that DPM Heng’s arrival was met with a number of reporters and photographers at the polling station. 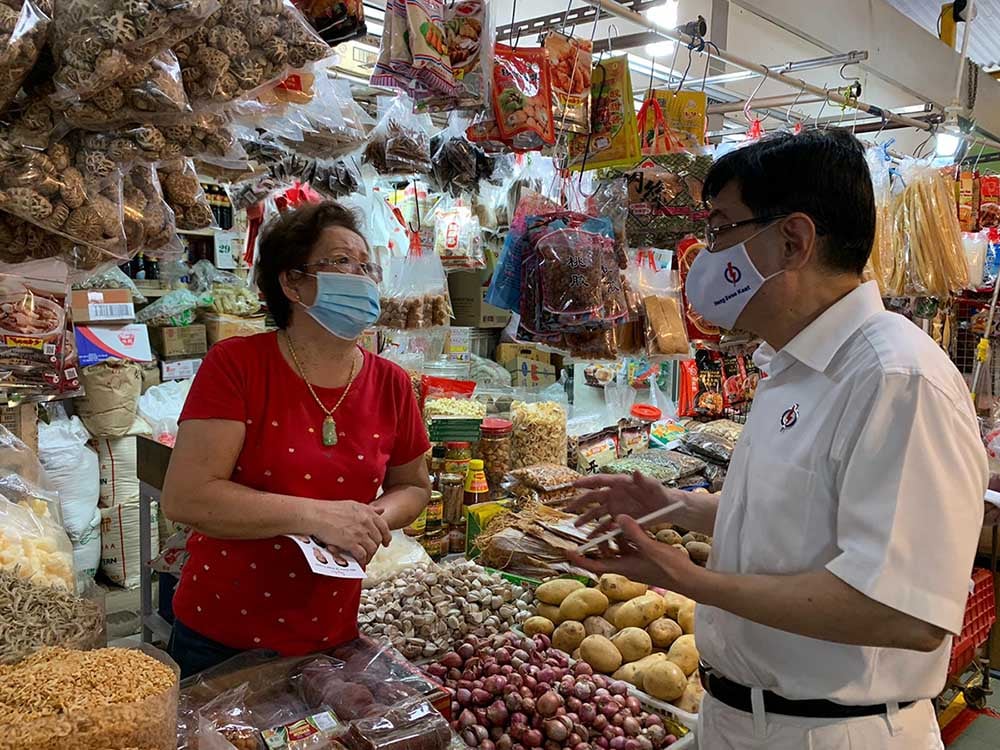 DPM Heng inspected the voting process for 15 minutes, where he instructed the Returning Officer (RO) to shift the wheelchair ramp, before leaving at 8.15am, Mr Loo said. 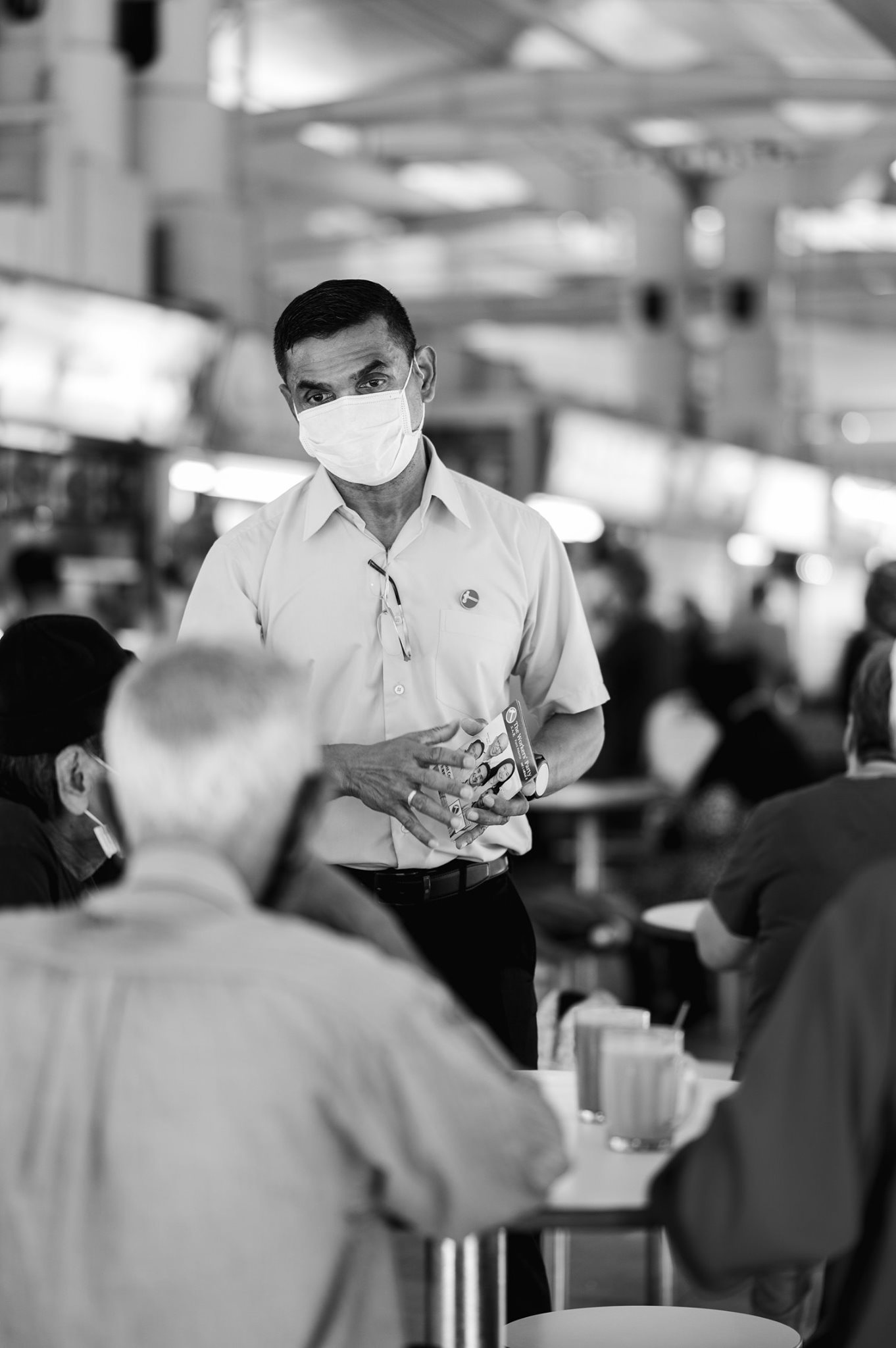 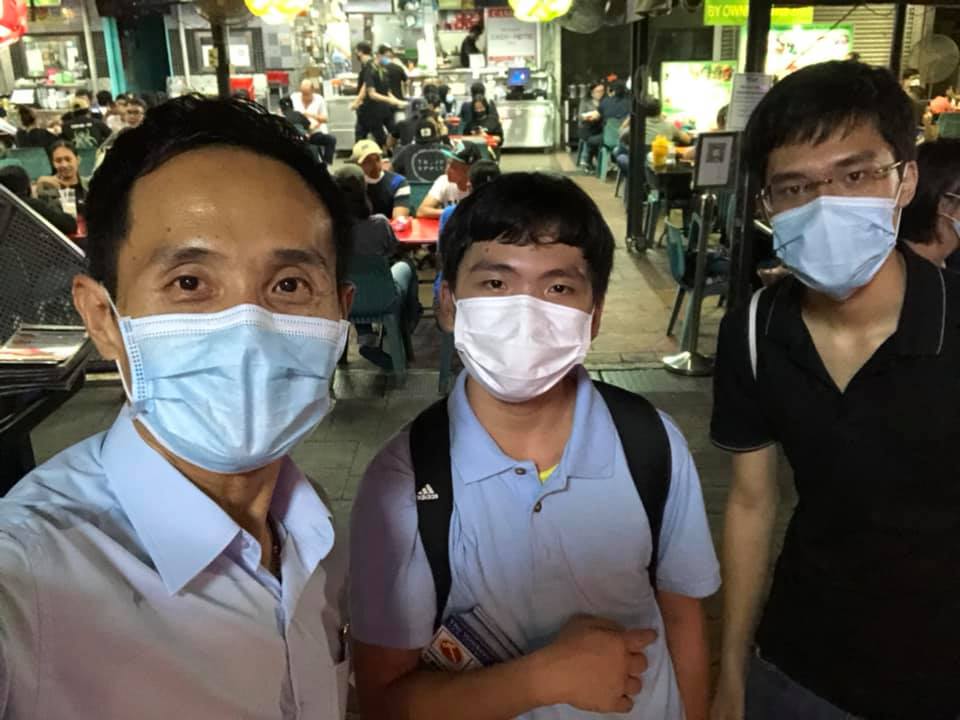 The polling agents also highlighted how people with different political views could still enjoy friendly interactions with each other. 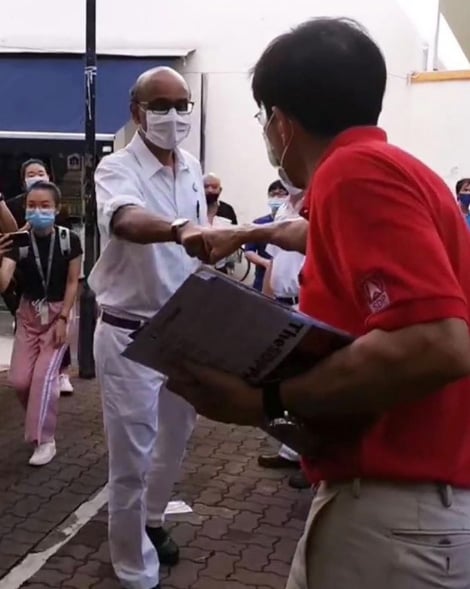 In her Facebook post, Ms Nabilah shared how both her and a PAP polling agent agreed that they were ultimately pro-Singapore despite their differing political opinions. 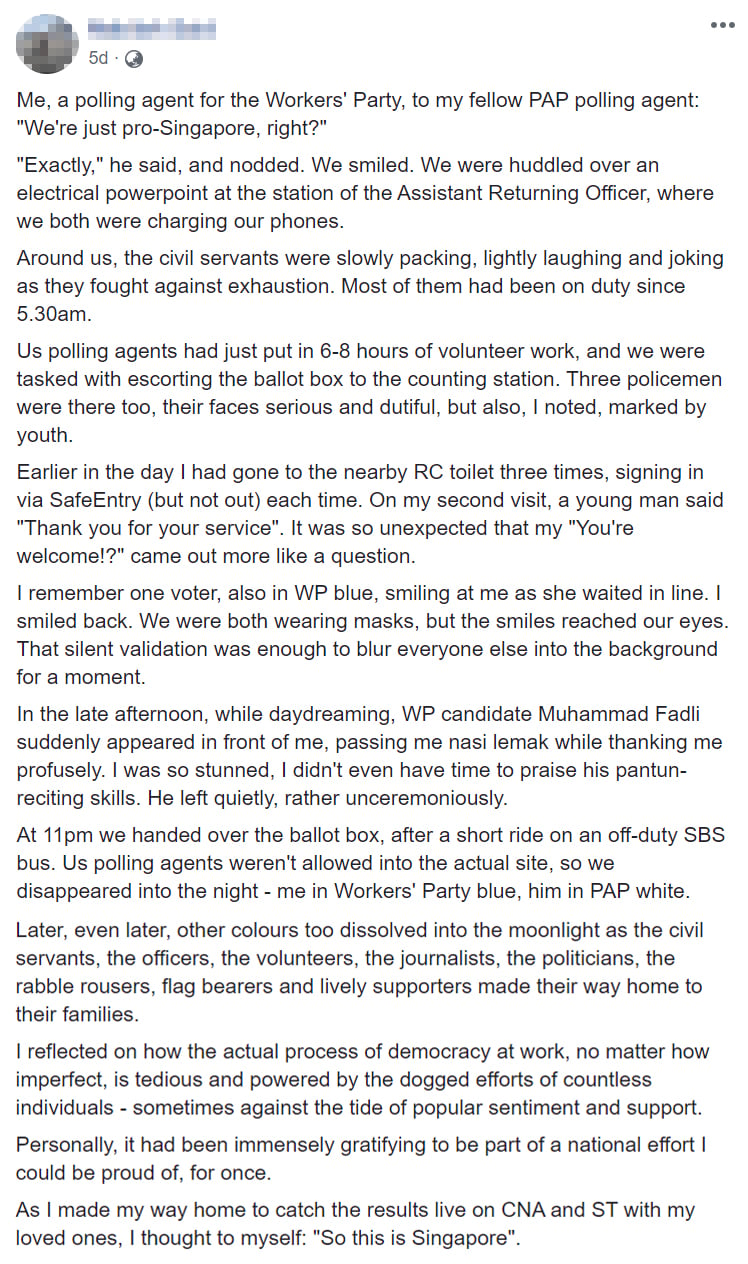 For Mr Loo – a WP volunteer – his conversation with his fellow PAP polling agent was born from curiosity about his motivations for volunteering.

While they didn’t end up taking a group shot together, scenes at other polling stations seem to indicate that polling agents from different parties did interact cordially.

Despite the arduous hours polling agents have to put in as volunteers, coupled with an extension to voting hours, Ms Nabilah in particular felt gratified by the work she did.

By observing the voting process, both agents saw themselves as ensuring a fair and unbiased election.

We hope their reflections will help more people empathise with the efforts in maintaining our democracy processes.