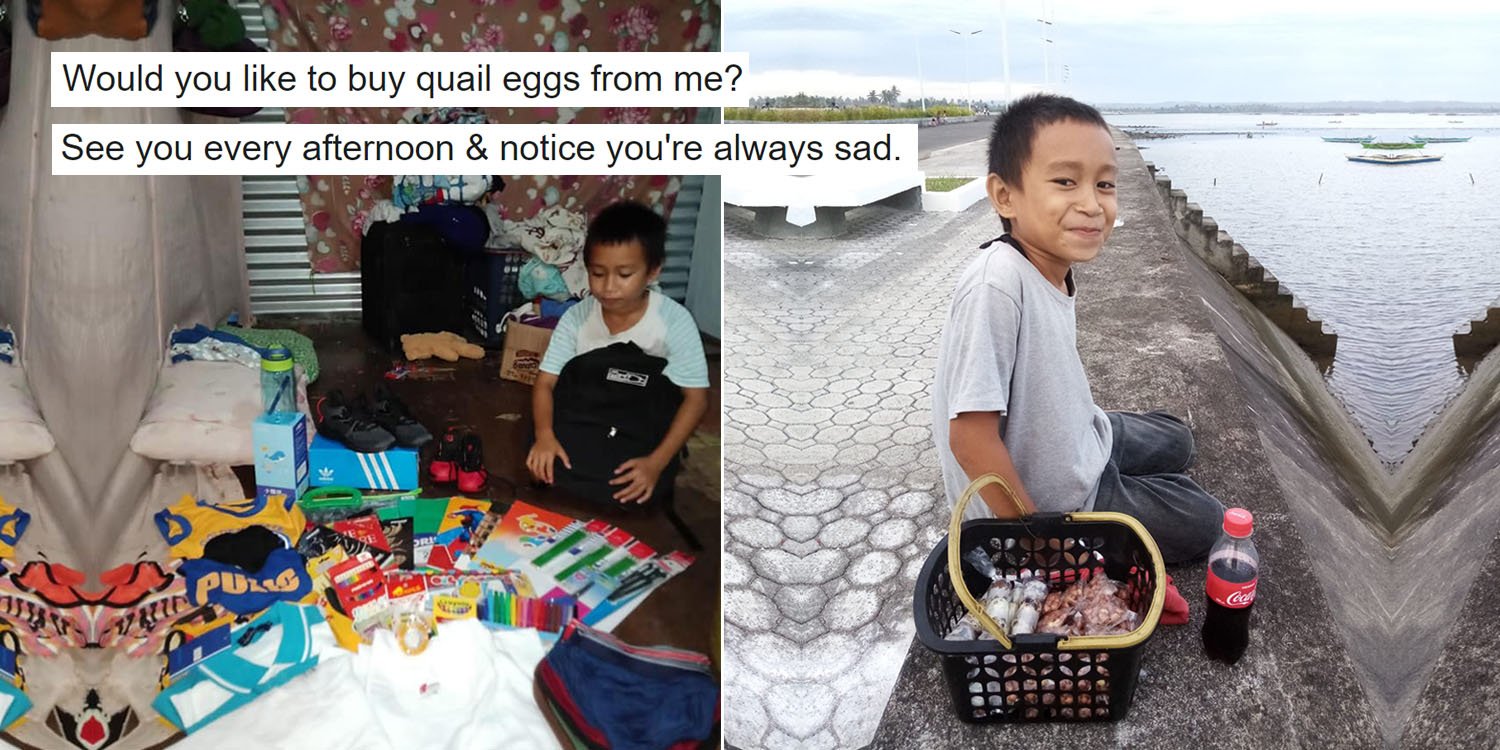 Sometimes life is filled with disappointments and setbacks, but this resilient Filipino child may inspire you to stay positive.

Last 4 Jul, a netizen named “Mariel” shared that she’s been walking in a seaside boulevard in the Philippines, to recover from her heartbreak. During one momentous visit, she was approached by a mere child who remained strong despite supporting his paralysed mom and family.

Her inspiring post has gone viral with 43,000 shares at the time of this article. 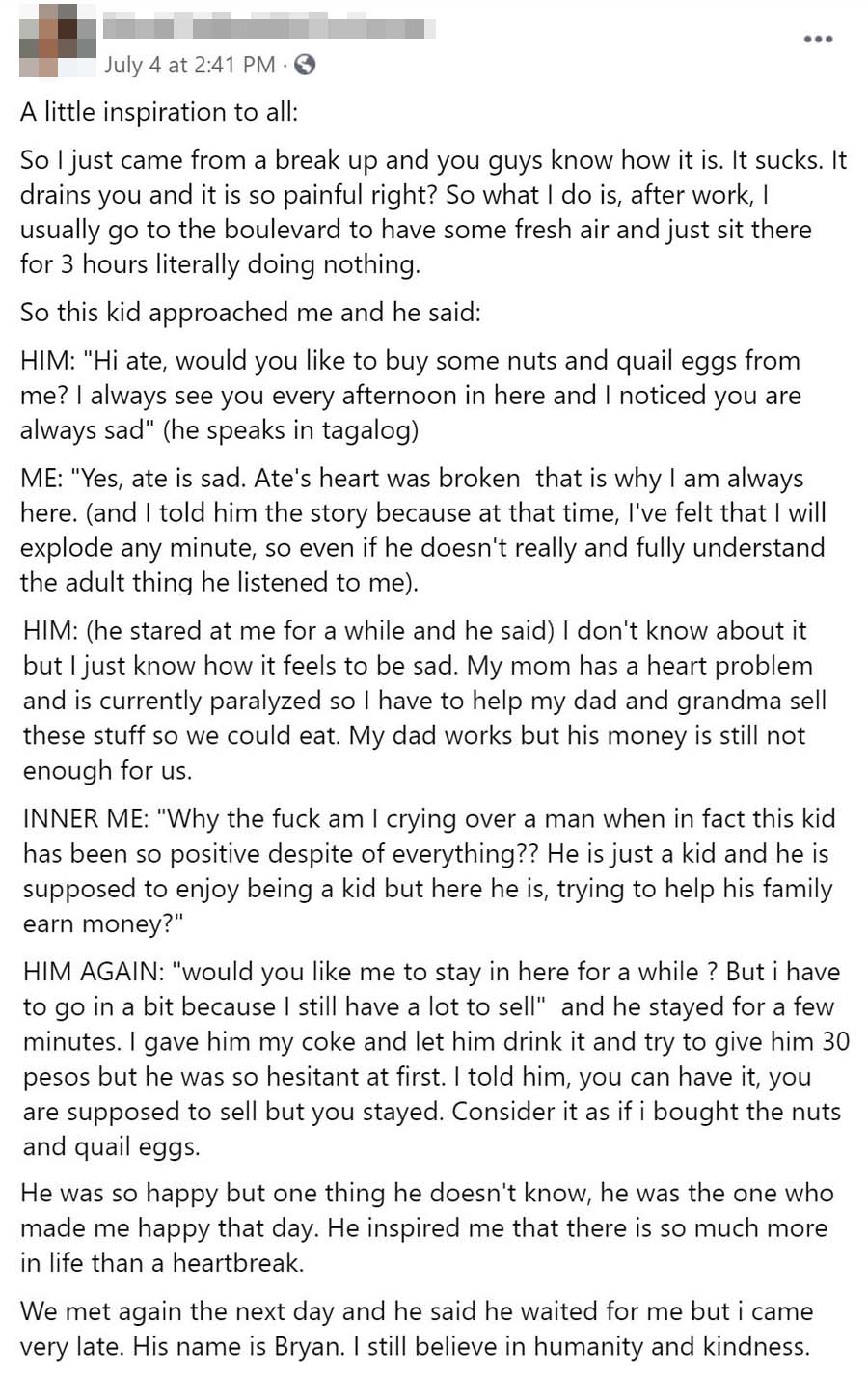 They say when life gets you down you have to keep swimming, so here’s a tale that will inspire you to do just that.

Anyone that has experienced a tough breakup can relate to the difficulty of recovering emotionally. For Mariel, the tragic end of her recent relationship “sucked” and seemed “painful”.

To recover, she frequented a seaside boulevard to get some fresh air. Her visits usually include sitting on a bench and doing nothing for three hours.

One fateful day, a kid approached her to ask if she would like to buy nuts and quail eggs.

I always see you every afternoon here and I noticed you are always sad.

Mariel shared her woes to the child named “Bryan”.

She ended up sharing her issues because she felt that her emotions were about to burst. While Bryan didn’t fully comprehend her situation, he listened with an open mind. 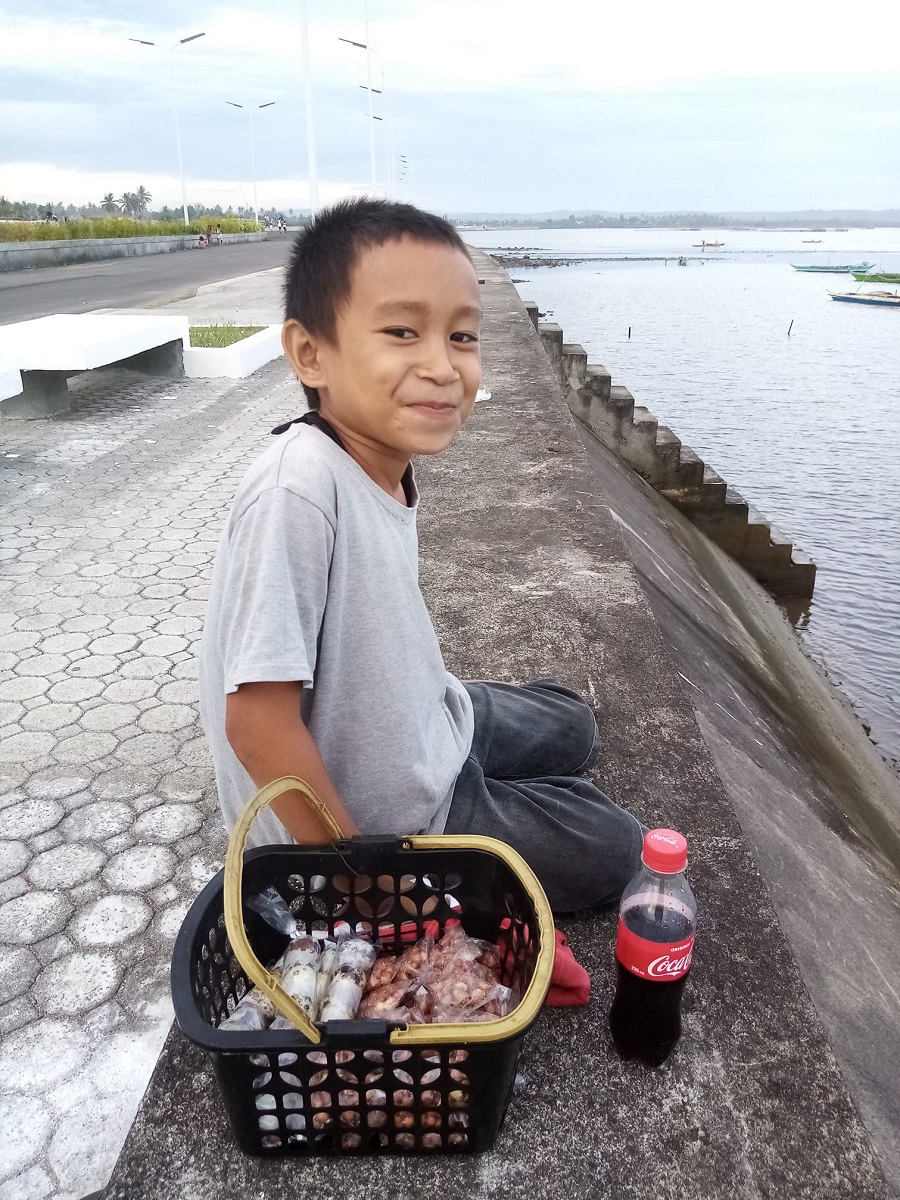 Likewise, Bryan shared the current obstacles he faced. As a child, he couldn’t relate to Mariel’s heartbreak but he was familiar with the feeling of sadness.

My mom has a heart problem and is currently paralysed so I have to help my dad and grandma sell these stuff so we could eat.

Bryan’s dad worked but his salary was not enough to feed the family and pay for his mom’s medical bills.

Upon hearing his story, Mariel was shocked. It seemed Bryan remained optimistic and undeterred by his tragic situation, while she was crying over a man. Despite his age, he couldn’t enjoy his youth because he had to help his family earn money.

Since Bryan was a busy child, he asked Mariel if she planned to stay in the boulevard for a while. He politely explained that he had to leave in a bit because he still had to sell his goods.

In response, Mariel gave him Coke and 30 pesos (S$0.84), but the child seemed hesitant to take any freebies. She insisted that he should take it because he was “supposed to sell, yet he stayed”.

To make him feel at ease, Mariel shared that he could consider the money as her purchasing of the nuts and quail eggs for the day.

Encounter that restored her faith in humanity

While Bryan was grateful to receive a token, he was unaware that he made Mariel glad during their short meeting. His resilience taught her that there is more to life than just heartbreak.

They met again the next day. It seemed her new friend Bryan had waited for her even though she arrived late.

Mariel shares this encounter let her believe in humanity and kindness once more.

Outpouring of support for resilient child

Since Bryan’s story went viral, many netizens have expressed willingness to donate and support him.

On Tuesday (21 Jul), Mariel posted an update regarding donations from kind netizens. 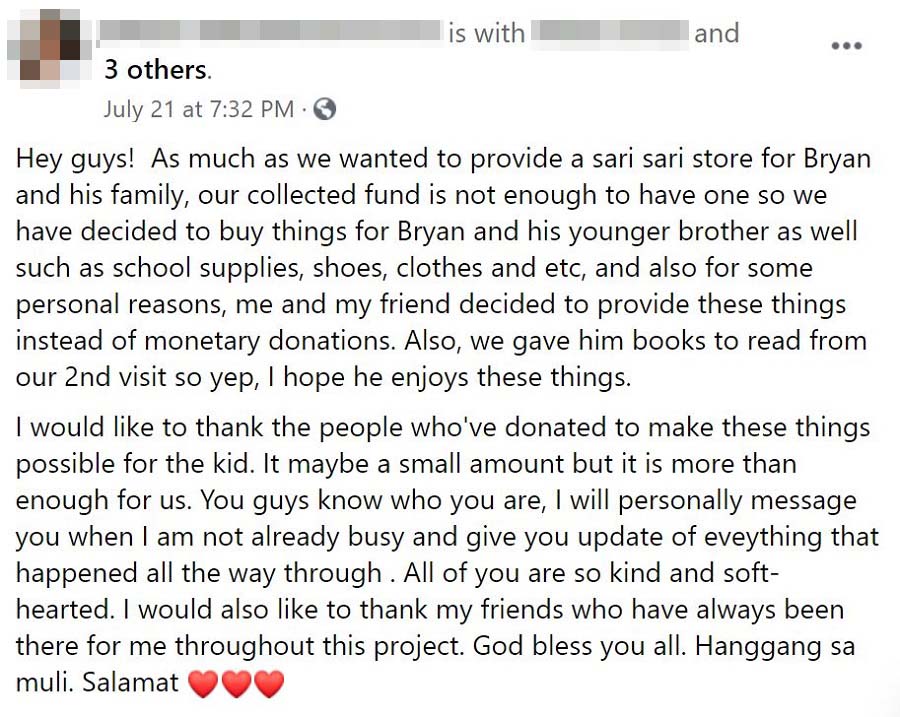 Rather than monetary donations, they used the money to buy shoes, clothes, books, and school supplies for Bryan & his younger brother. 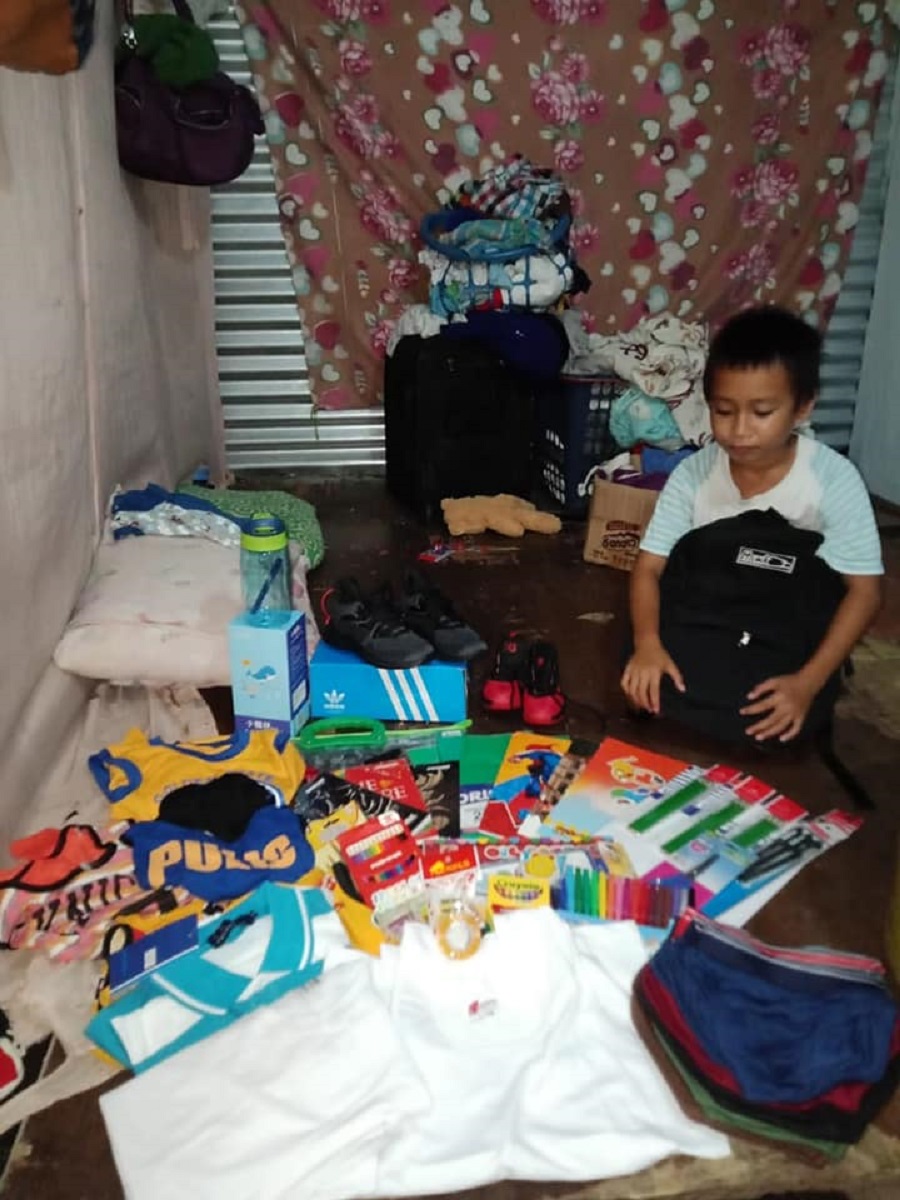 Finally, she thanked the generous folk who were able to help. Even if it was only a small amount, it was more than enough for them. 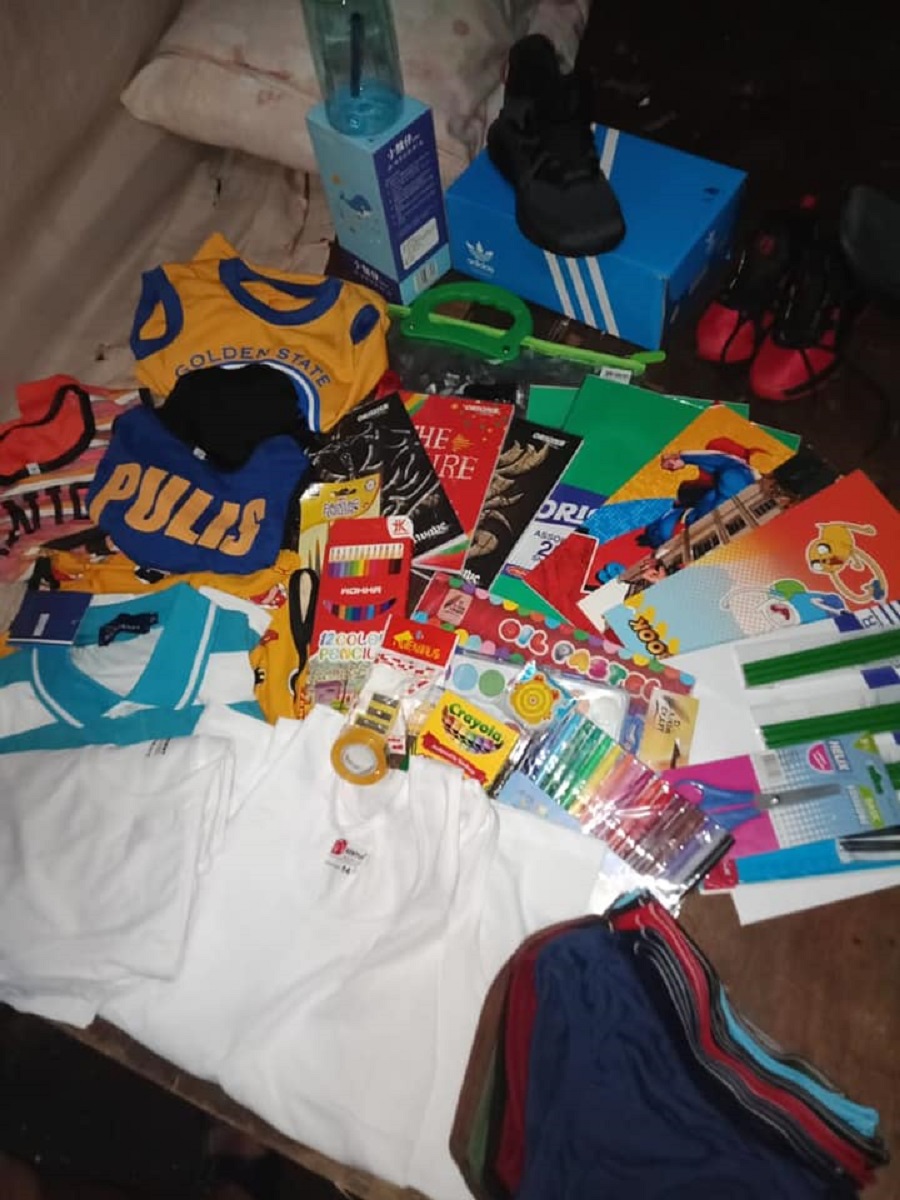 On Friday (24 Jul), a netizen named Melissa shared an update on the story through the Subtle Asian Traits, a Facebook community with over 1.8 million members.

She allegedly reached out to Mariel and learned that their town’s mayor and vice mayor also helped Bryan. At the moment, they’re currently raising funds to help foot hospital bills for his mother.

Due to the Covid-19 outbreak, some of us are experiencing obstacles and difficult decisions.

Just like young Bryan who’s mature beyond his years, we can still remain hopeful and muster the strength to keep going. Life has many blessings, sometimes we should take a moment to appreciate them.

How did you recover from a challenge in life? Let us know in the comments below.