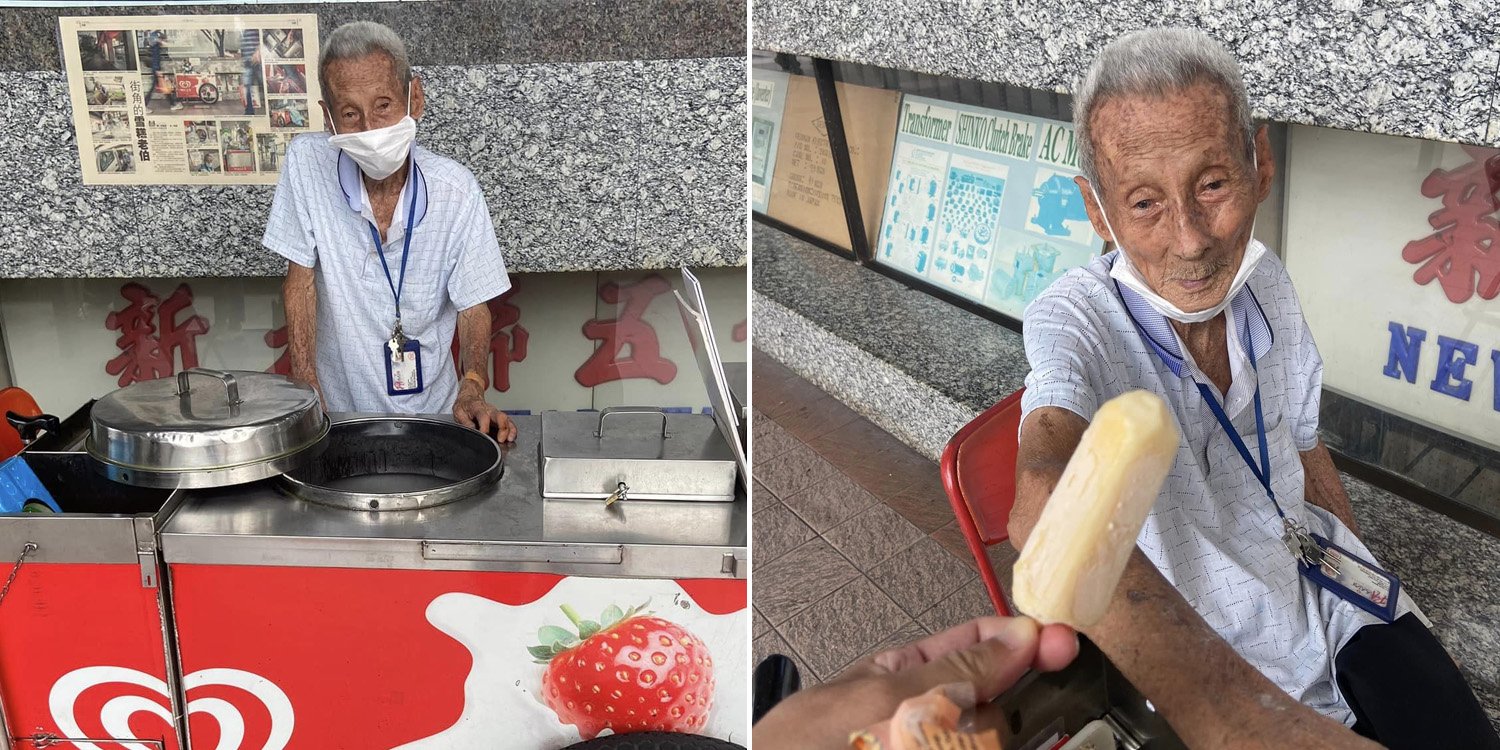 Times have been tough for the elderly uncle.

By now, those in Jalan Besar would be well familiar with Mr Ng Teak Boon, an ice cream seller who has become an almost permanent fixture outside Sim Lim Tower.

Continuing to sell ice cream despite his old age, he’s endeared himself plenty to folks who know him. However, one such individual recently raised concerns about his situation, calling for more assistance from the public. 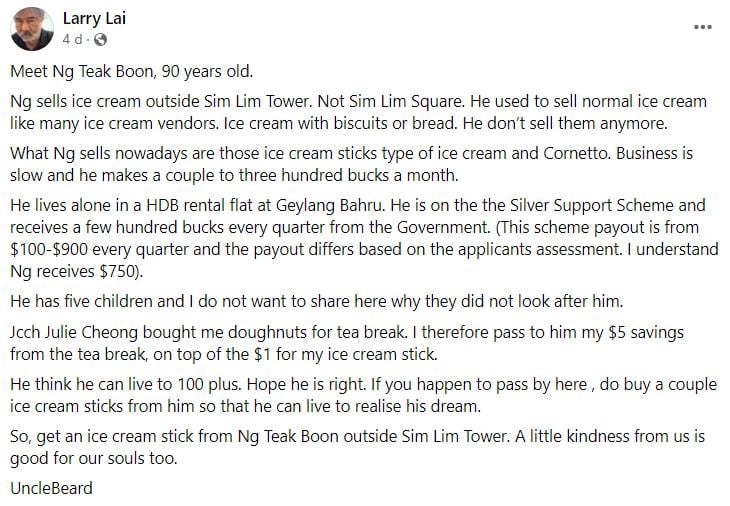 Claiming that Mr Ng only earns up to S$300 a month, he calls for members of the public to support the elderly seller.

Posting in the Can Eat! Hawker Food Facebook group on 23 Sep, admin Mr Lai shed some light on Mr Ng’s rather dire situation. According to him, sales have been slow for Mr Ng, who has only been making up to S$300 a month.

Instead of selling popular ice cream treats with biscuits or bread, Mr Lai said that tough times have forced Mr Ng to only sell ready-to-eat versions like Cornetto. 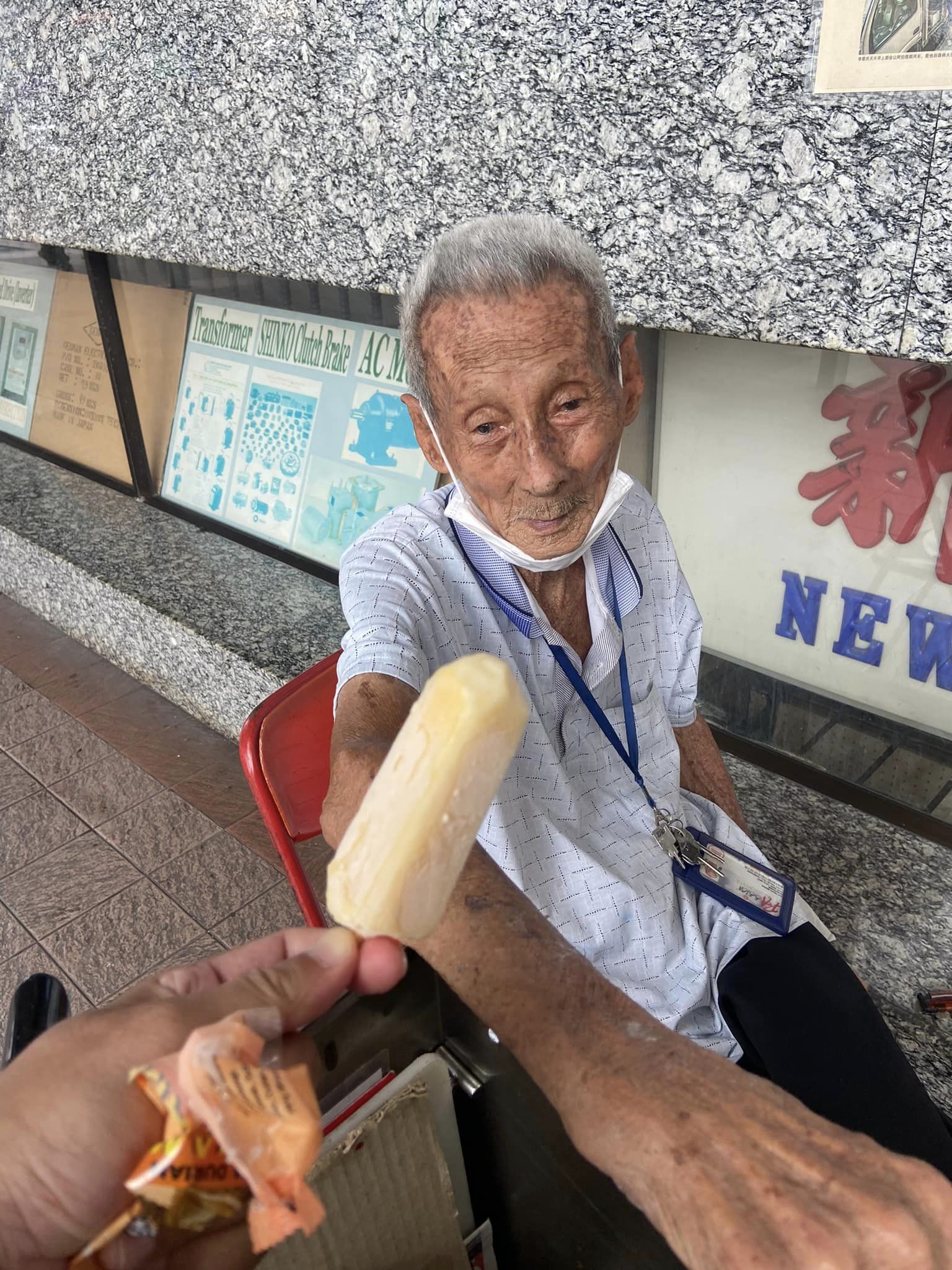 Mr Ng also lives alone in an HDB rental flat at Geylang Bahru. He is apparently on the Silver Support Scheme and receives a S$750 payout every three months.

While he has family, Mr Lai alleged that Mr Ng’s five children do not look after him.

As such, he helps the elderly man out in whichever way he can, such as passing him S$5 of his savings from his tea break in addition to S$1 for an ice cream stick.

He has also called for more members of the public to support Mr Ng’s business.

“He thinks he can live to 100 plus,” Mr Lai said. “If you happen to pass by here, do buy a couple of ice cream sticks from him so that he can live to realise his dream.”

Mr Ng is apparently no stranger to goodwill, having received donations from kind souls before.

Back during the ‘Circuit Breaker’ in 2020, non-profit organisation Happy People Helping People gifted him with a brand new Panasonic television. They also sponsored his meals and gave him a small allowance to help tide him through the period.

Mr Ng resumed work soon after at the end of May the same year, with netizens pledging to support his business then as well.

Granted, most of us receive our daily dessert fix from modern ice cream parlours. It’s undeniable, though, that ice cream vendors like Mr Ng give us a sense of nostalgia rarely felt elsewhere.

Despite the circumstances of his situation, the fact that Mr Ng has continued with his business is admirable indeed.

Here’s to hoping more people will come through and provide him with any support necessary.