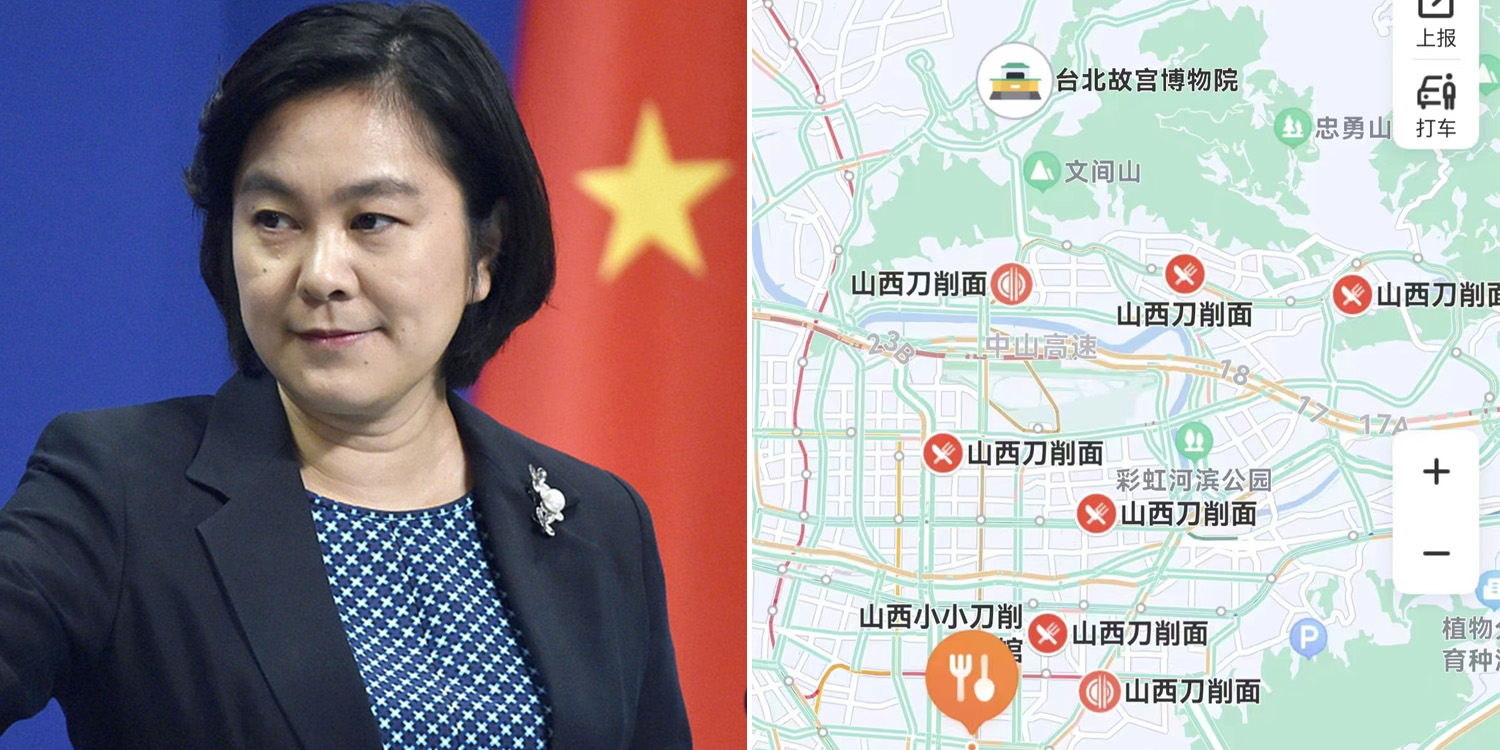 Hundreds of netizens made parody statements of the tweet.

For the past few weeks, tensions between China and Taiwan have been a hot topic of conversation. Nearly everyone has something to say about the two contesting territories, especially after Nancy Pelosi’s visit to Taiwan.

Even something as ordinary as eating pasta could be misconstrued as unintentional support.

Imaginations are evidently running wild when interpreting the significance of food in this global affair. A spokeswoman for China’s Ministry of Foreign Affairs recently used a unique way to emphasise Beijing’s claim over Taiwan.

She tweeted a list of restaurants in Taiwan’s capital to prove the territory is part of China. Unfortunately, her statement backfired, inviting ridicule from netizens instead.

Spokeswoman from China mentions eateries as proof of claim

On Sunday (7 Aug), spokeswoman Hua Chunying made the infamous statement in a tweet. 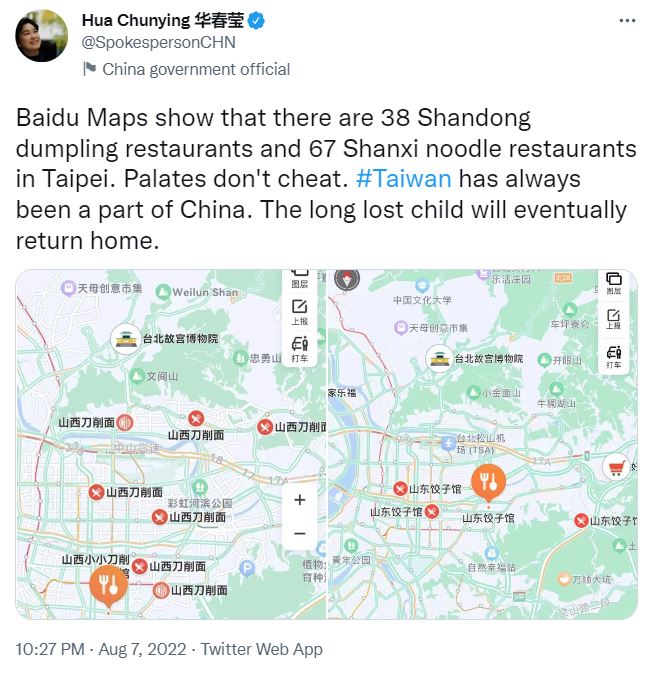 She said according to Baidu Maps, there are 38 Shandong dumpling restaurants and 67 Shanxi noodle restaurants in Taipei.

Palates don’t cheat. #Taiwan has always been a part of China. The long lost child will eventually return home.

Her tweet resulted from recent tensions between the United States, China and Taiwan after a visit by Nancy Pelosi to the self-governing province.

However, the statement did not have quite the results Ms Hua intended. Many users on Twitter dogpiled on it, poking fun at the tweet.

One user commented that by such logic, the presence of ramen restaurants in Taiwan makes it a part of Japan as well.

Another user pointed to the numerous KFC and Burger King restaurants in China as proof of the republic belonging to the US.

A former member of the US State Department had even reposted her tweet, jokingly making a parody. 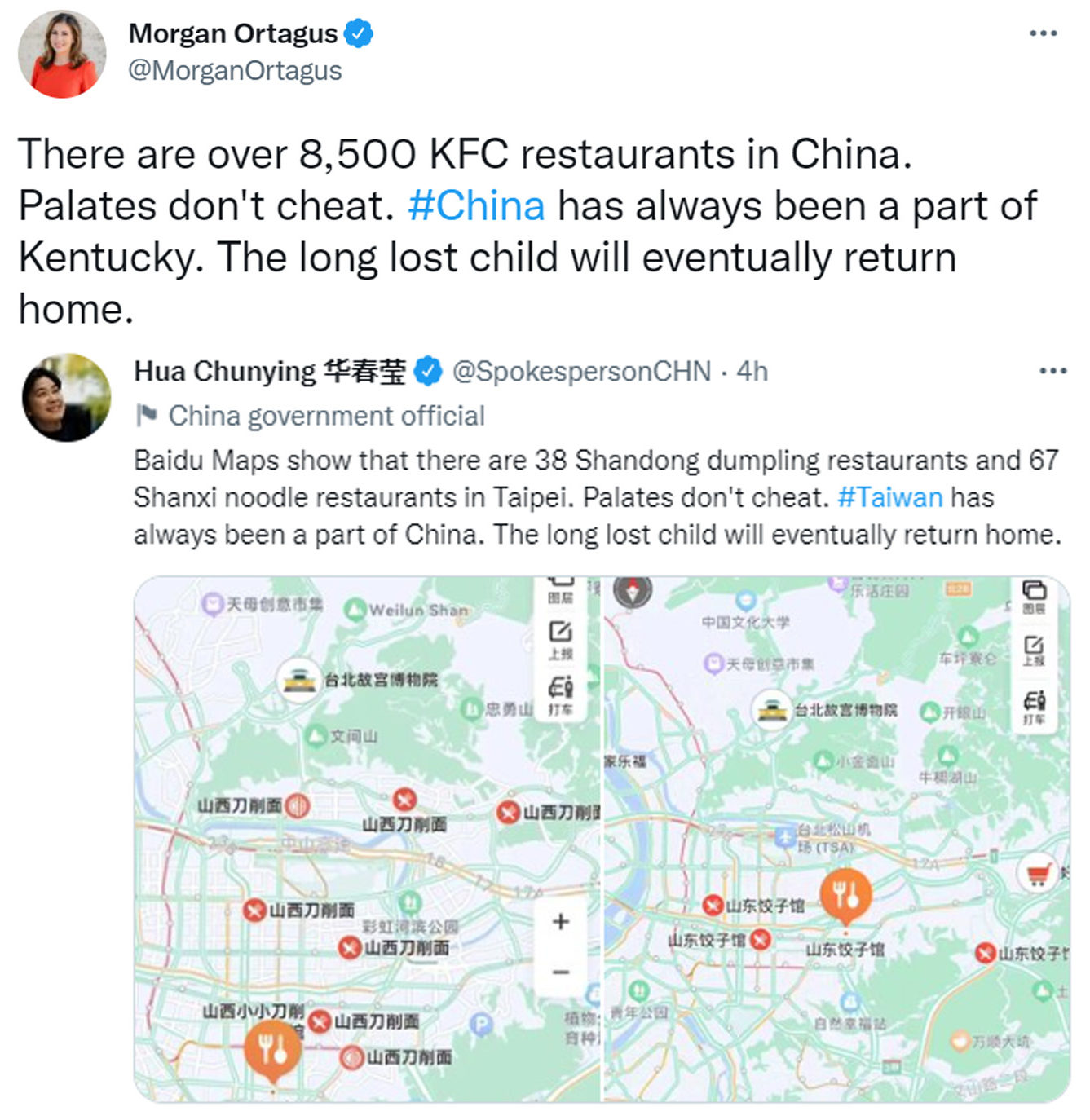 Singapore wasn’t left out of the trend, either.

To be fair to those eateries, though, we also have sushi joints, mookata restaurants, and iconic Indian restaurants, among others. Is this a sign of us being the long-lost children of a dozen other countries across the globe?

Perhaps only Ms Hua will know the answer to that one.

Tensions between US, China & Taiwan continue

All jokes aside, such immense backlash points to the extent of current existing tensions between Taiwan and China.

Perhaps the situation will ease down soon, and we will see a lower frequency of similar sensitive statements. Or maybe, imported goods will become the next point of reference for territory claims.

At this rate, who knows?