Super Smash Bros Fan With Cancer Gets Game Demo, Played For 3 Hours Before Passing Away 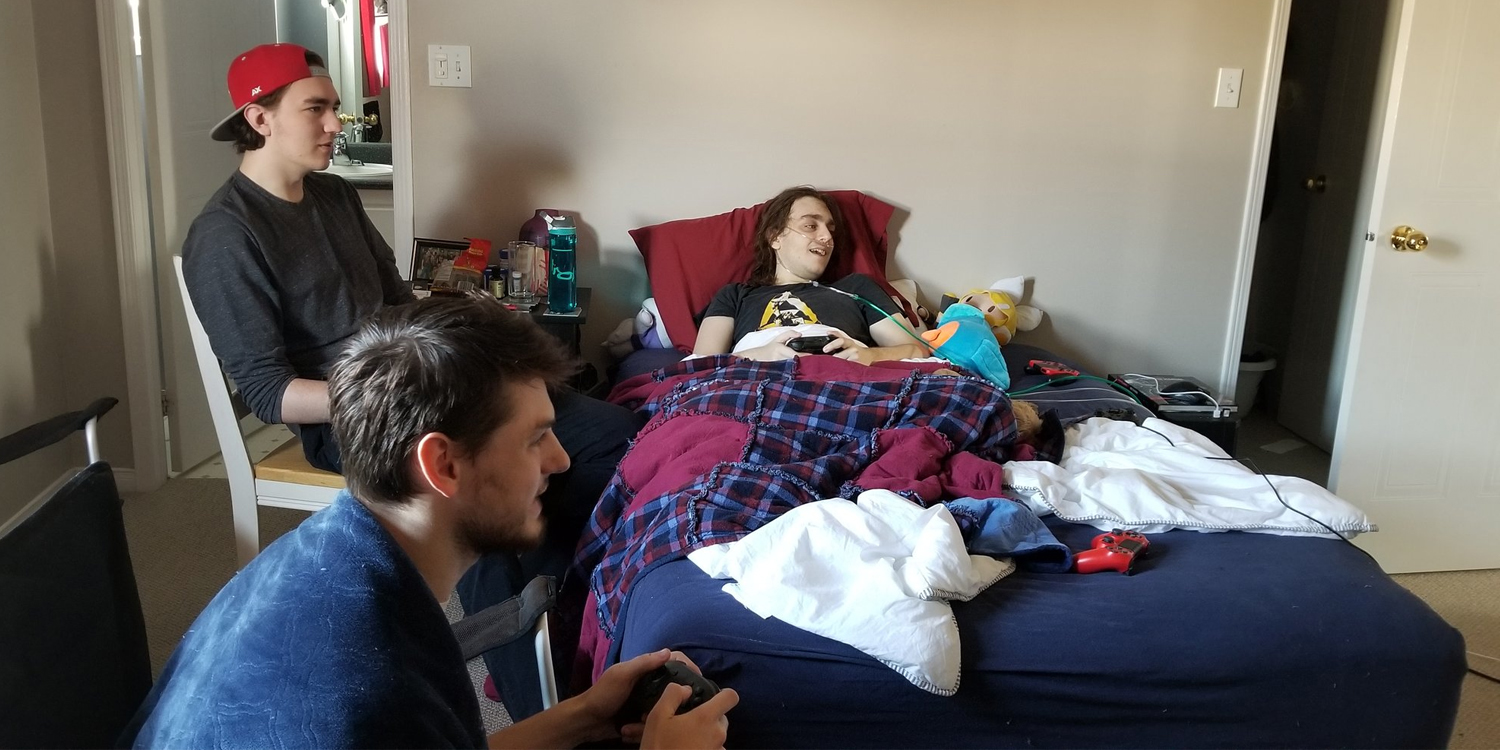 Cancer Patient Was Super Smash Bros Fan, Got To Play Last Game In 2018

For most of us gamers, missing out on the chance to cop our favourite games on the first day of release isn’t such a big deal — you can always get it on another day.

But time was of the essence for one Super Smash Bros fan who had terminal bone cancer and was bedridden prior to the release of the game’s latest instalment back in 2018.

Thankfully with the help of the Smash Bros community and his friend, the fan got to play a demo copy of the game before its release. He passed away just 4 days later.

While the story happened 2 years ago, it was recently reshared widely on social media.

Back on 14 Sep 2018, 21-year-old Chris Taylor tweeted about how he was feeling heartbroken about potentially missing out on Super Smash Bros. Ultimate. 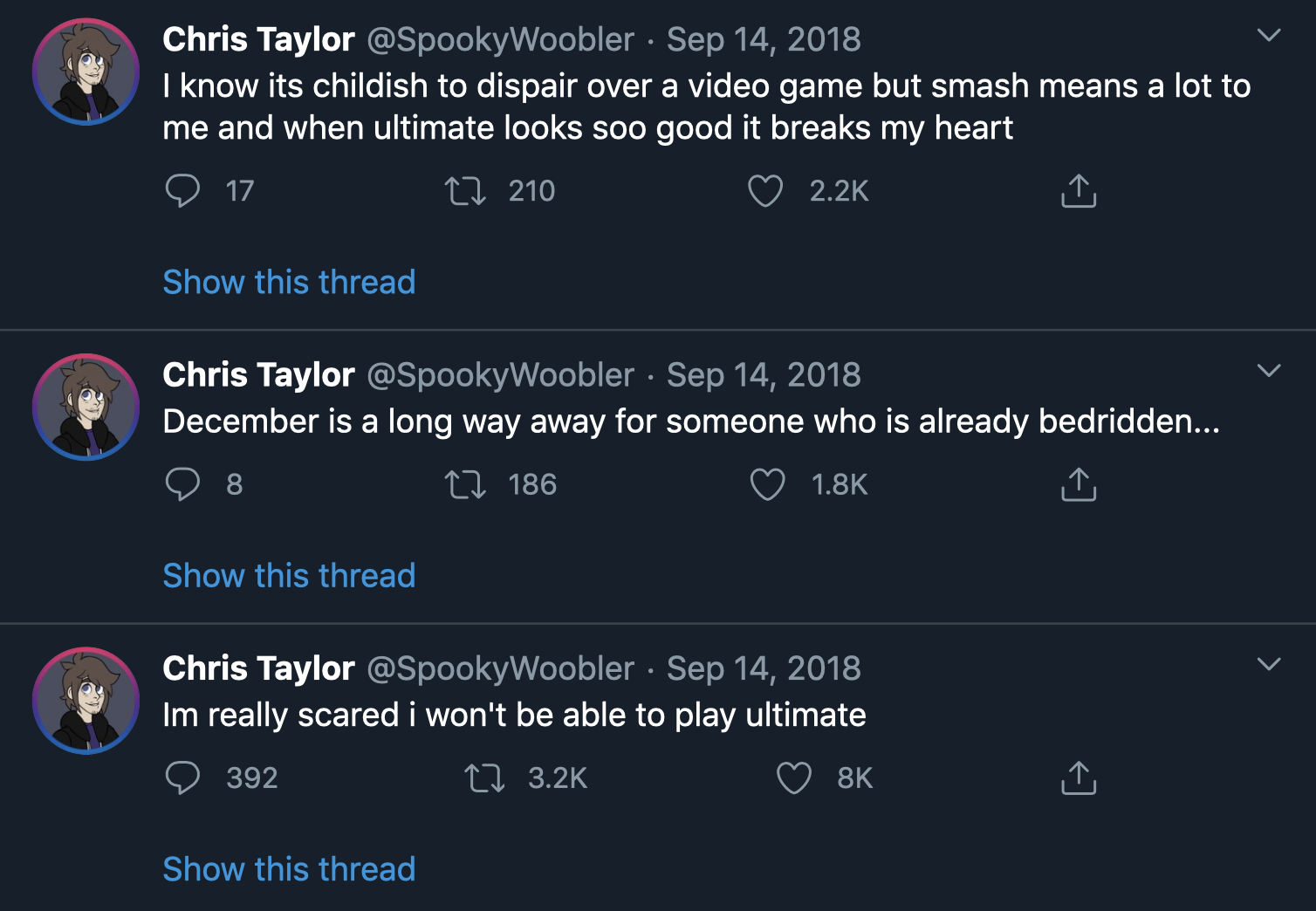 He was reportedly bedridden then, and the game was only set to launch 3 months later.

However, the gamer’s friends decided to come together to make his final days happy ones.

One of Chris’ friends apparently reached out to Nintendo via Twitter a day later, appealing for an exception to be made. 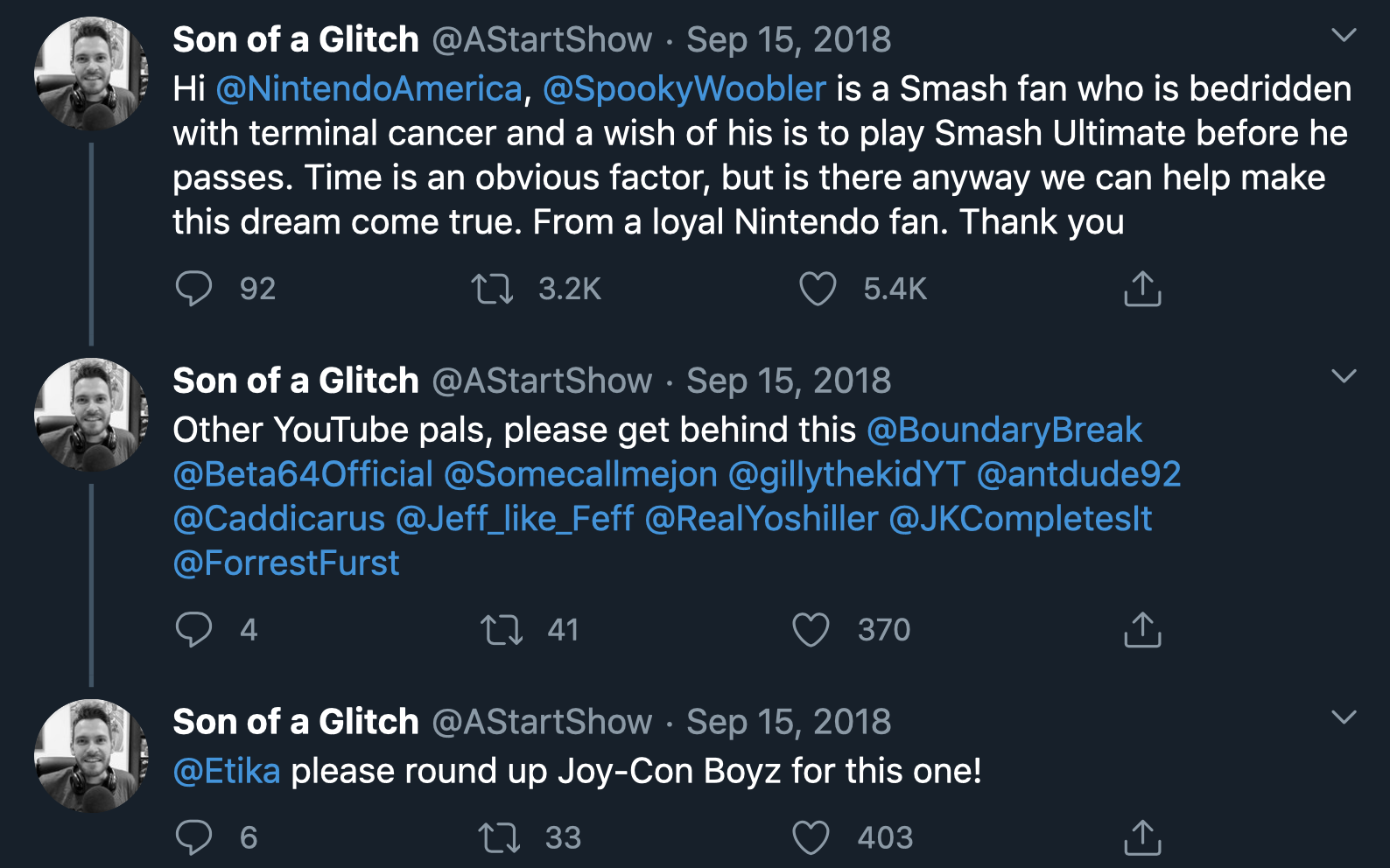 On 21 Sep 2018, around a week after the Twitter appeal, Nintendo sent 2 representatives down to help Chris fulfil one of his final wishes.

That day, Chris reportedly played the game’s demo for 3 hours with his mother, brother, and a friend. It’s truly a heartwarming scene as he managed to spend some of his final hours playing the game he loved. 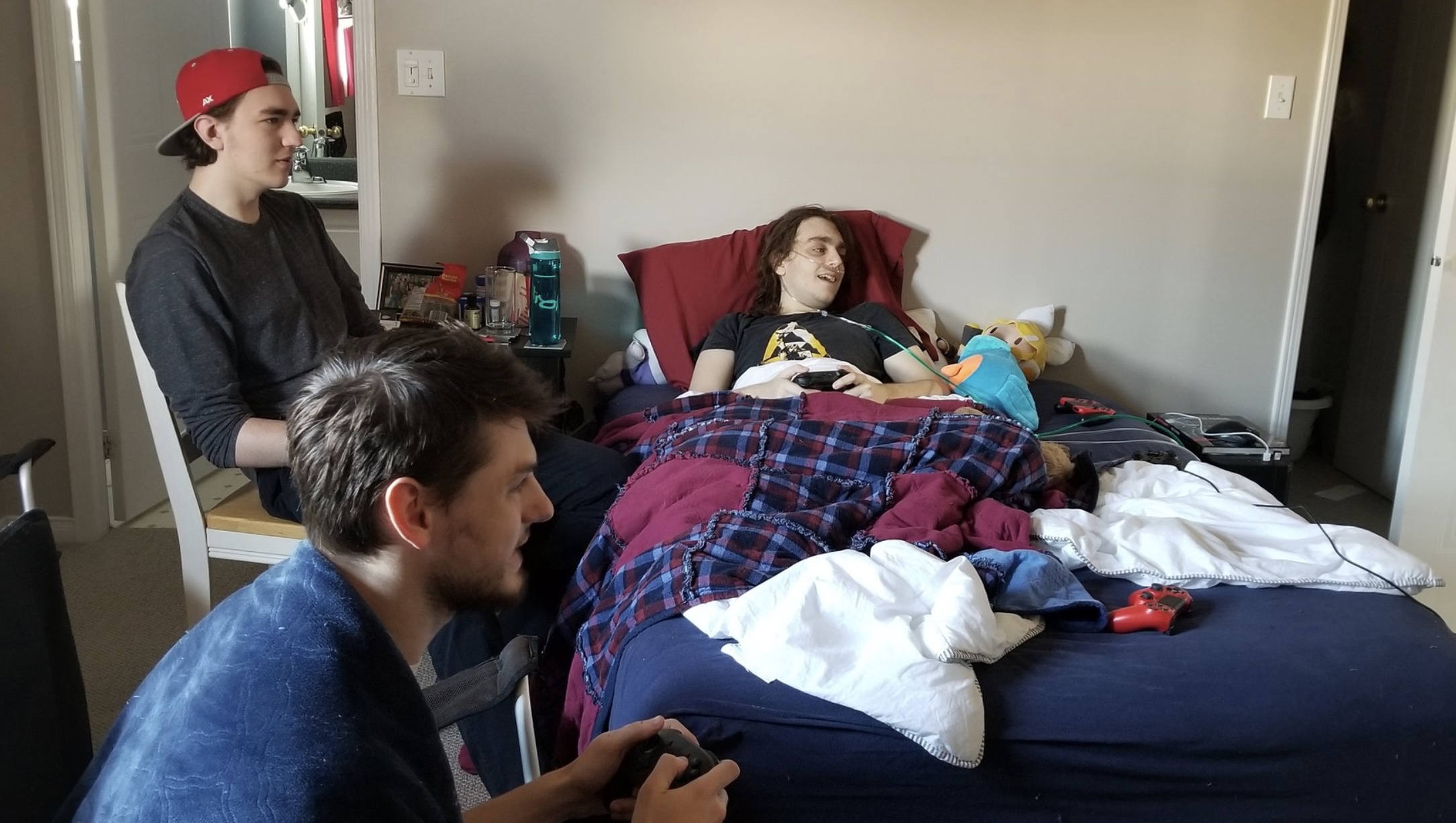 The pictures show Chris enjoying the game with a smile across his face. He shared his joy and thanked his supporters on Twitter. 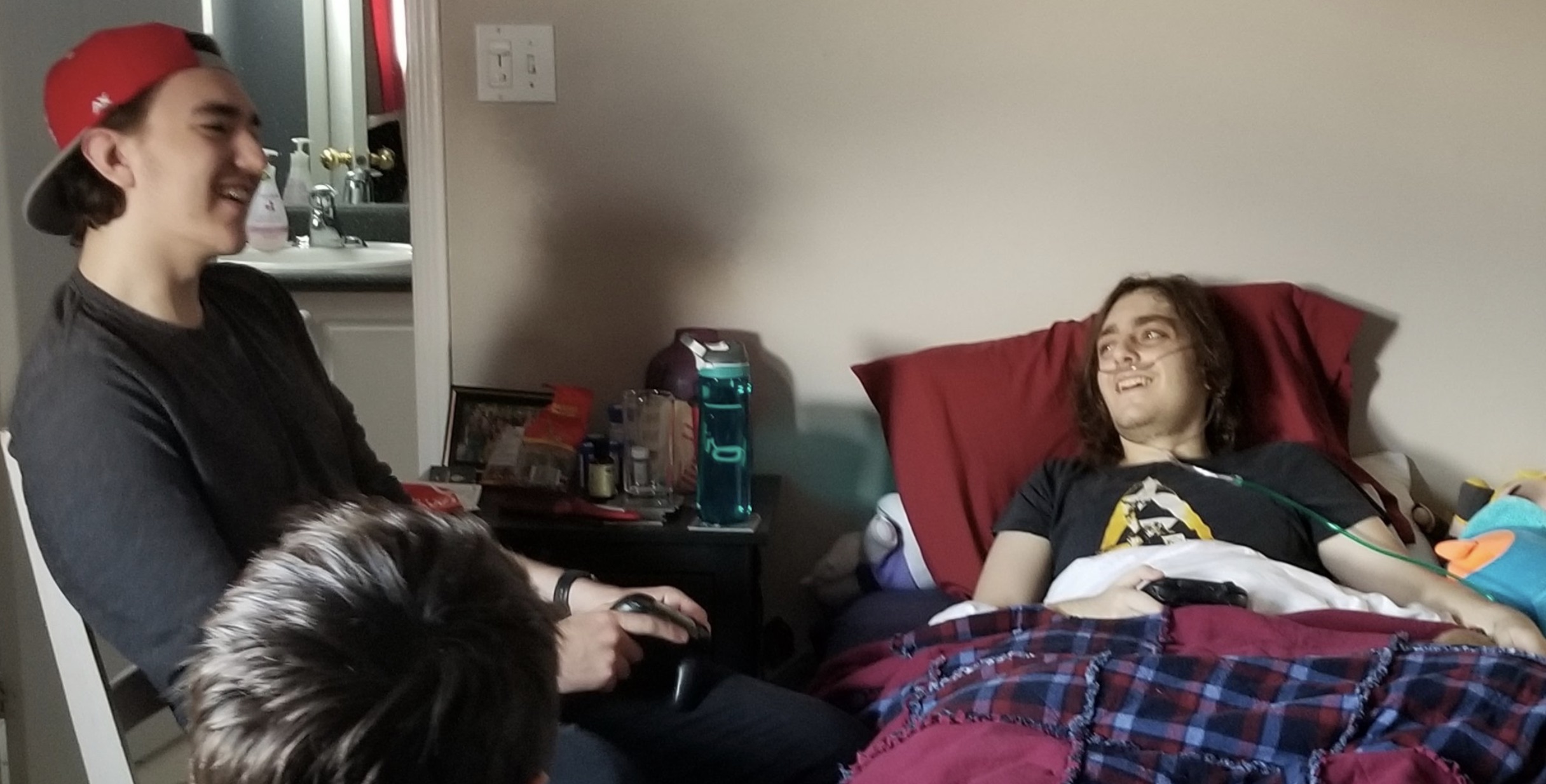 Sadly, he passed away 4 days later on 25 Sep after seeing his Ultimate dream once true

Though this bittersweet story happened almost 2 years ago, it still echoes the adage “It’s not the years in your life that count. It’s the life in your years.”

Passing away at the young age of 21, it’s sad to think about the many installations of Super Smash Bros Chris could have played.

However, he was happy with having one last round of the game surrounded by family and friends, and sometimes that’s all that really matters.