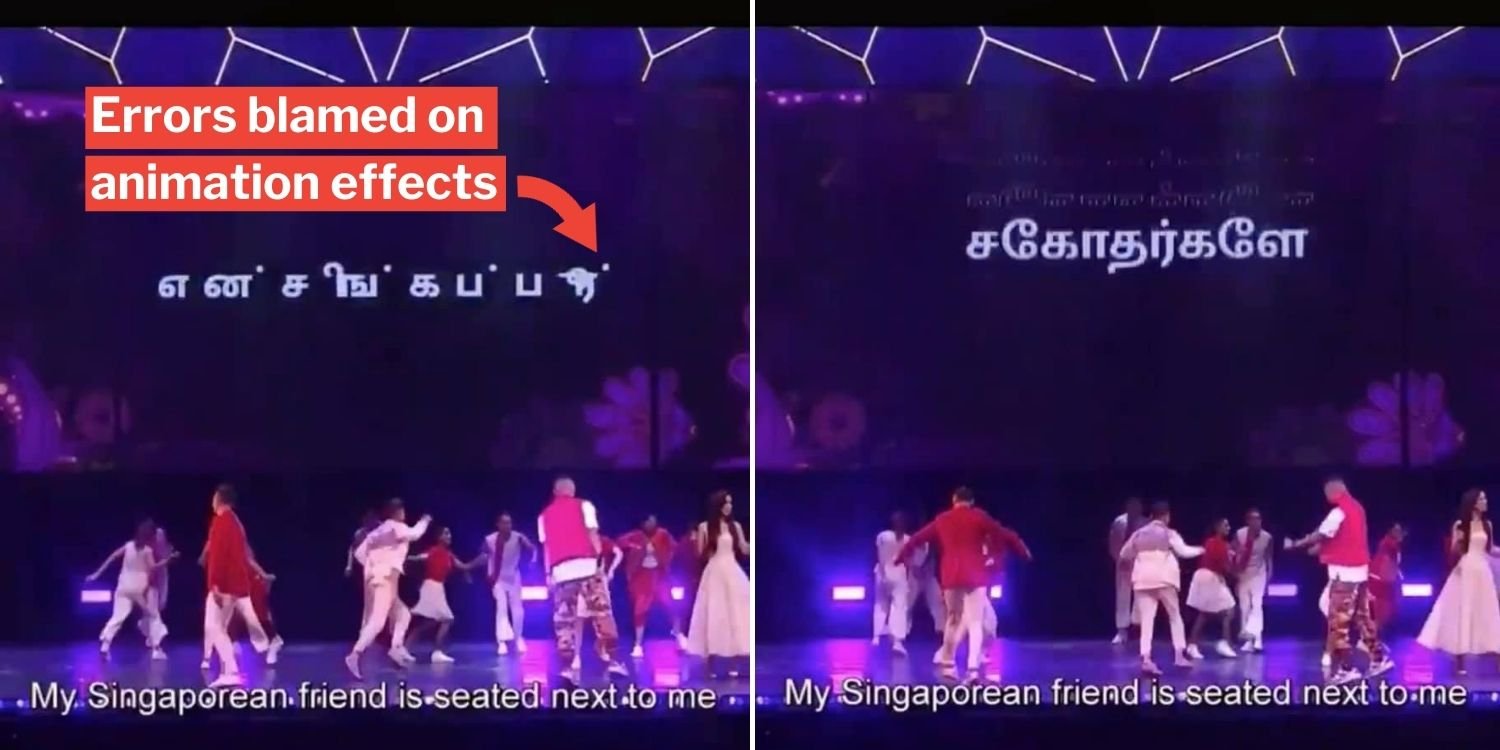 Singapore’s proud of its multicultural and multiracial makeup, and Tamil is one of our 4 official languages.

That’s why it’s mystifying when Tamil errors pop up in official communications time and again.

We’ve recently had yet another incident of Tamil characters written wrongly. This time, it was during the most high-profile event of the year — the National Day Parade (NDP). 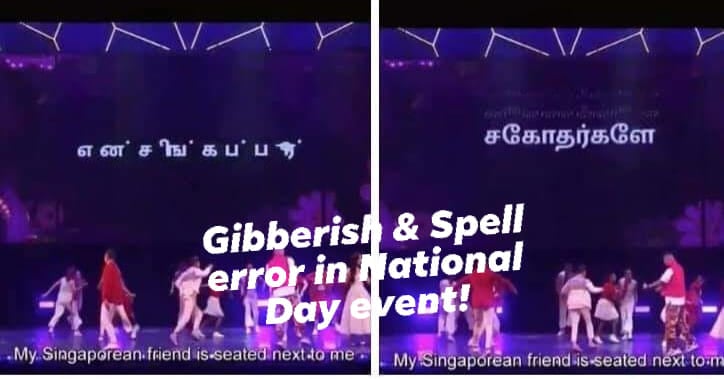 It prompted annoyed Tamil-speaking Singaporeans to lament the lack of proper checks done to ensure Tamil accuracy. Here’s a post from one of them. 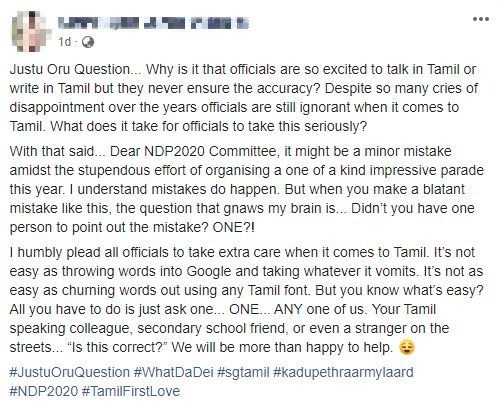 Due to Covid-19 concerns, this year’s NDP was split into a morning parade and an evening show that was streamed “live” for all citizens to enjoy at home.

Tamil speakers might have noticed something jarring during a segment of the evening show broadcast, though.

One of the performances included Tamil song lyrics displayed on LED screens, and according to one incensed netizen, it was “gibberish”. 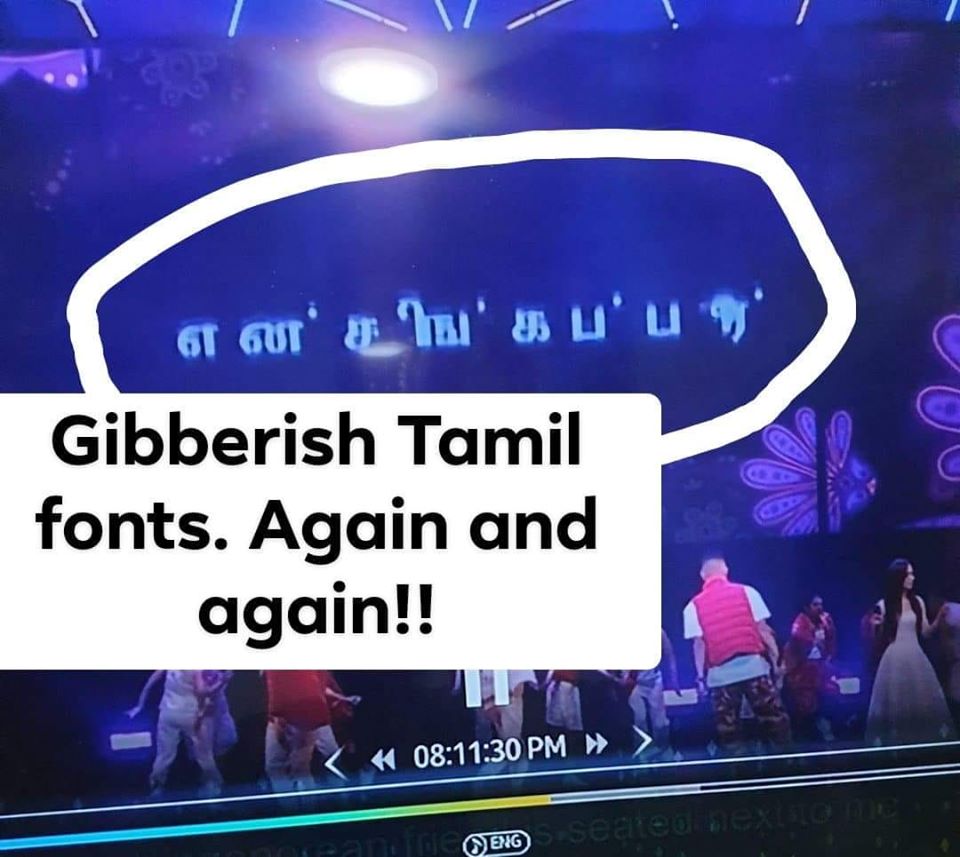 Apparently, one of the problems had to do with a line of lyrics in Tamil that means “My Singapore”.

The strokes and letters were wrongly positioned, thus it turned out to be gibberish. 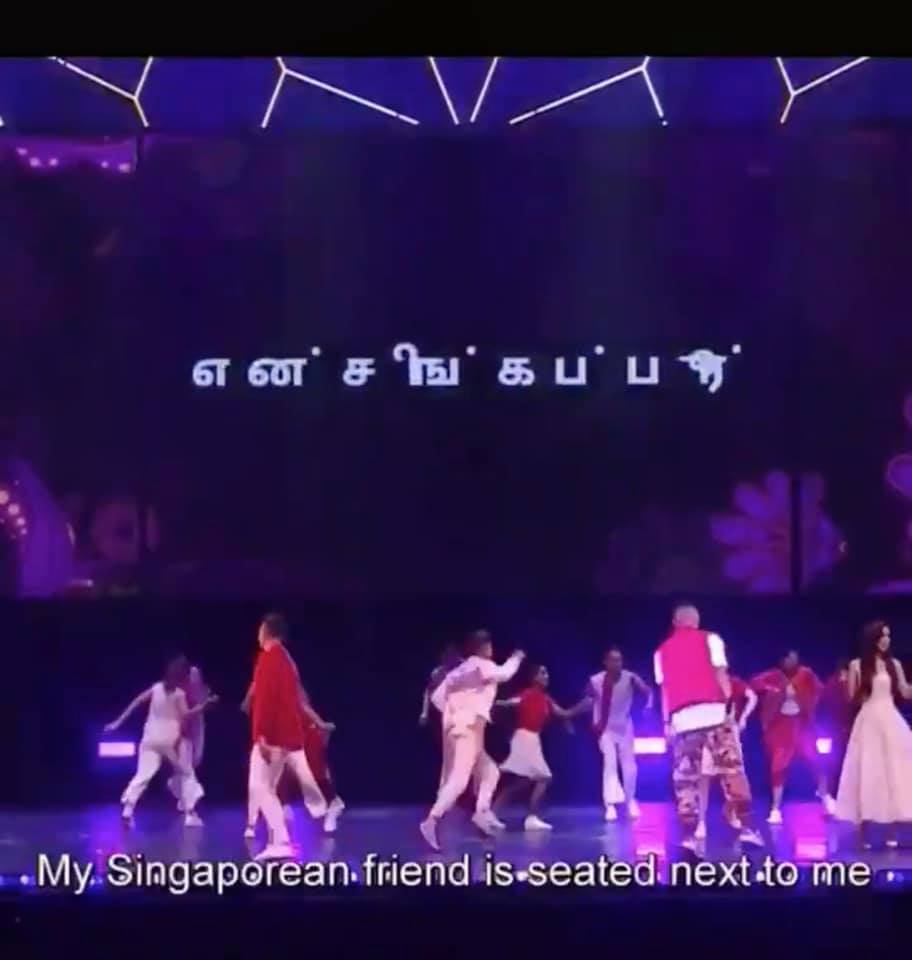 Also, some Tamil words were misspelt, like those for “friends” and “siblings”. 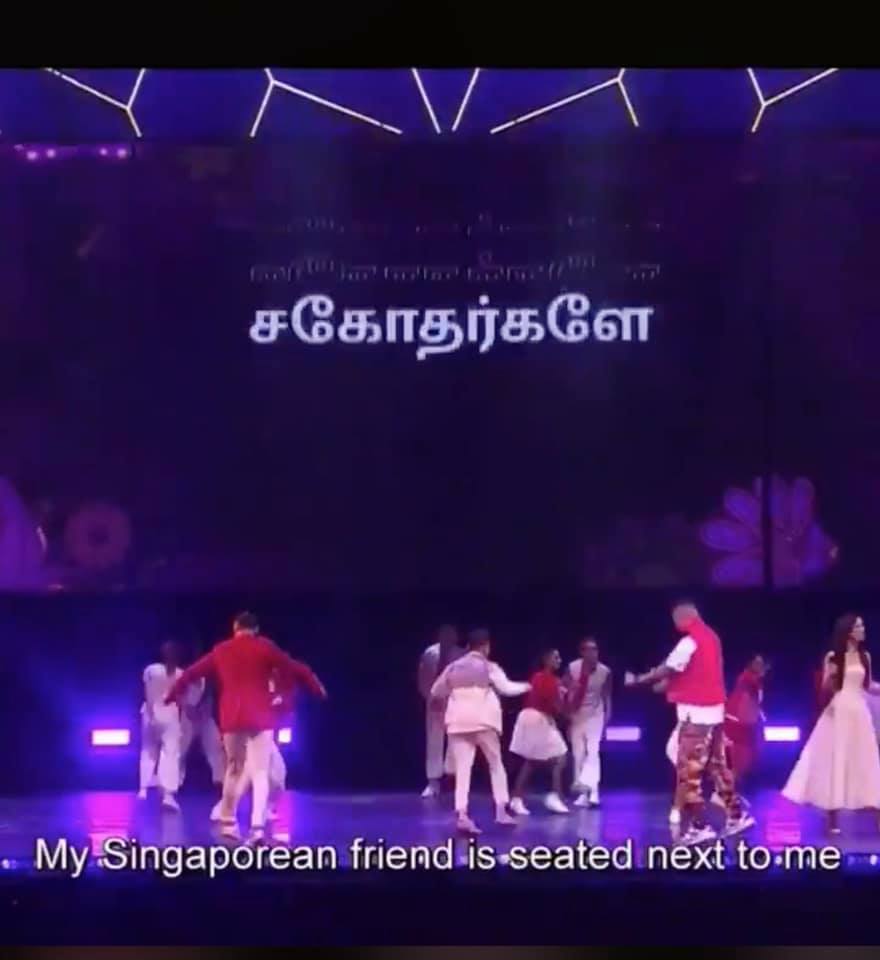 What struck him is that there have been “so many cries of disappointment over the years” over Tamil errors but it seems officials are not taking them seriously.

He also accused officials of being still ignorant of Tamil.

All it takes is to ask

Mr Somasundaram pointed out that all it took to avoid making a mistake on national TV is to ask,

All you have to do is just ask one… ONE… ANY one of us.

It doesn’t need to be a Tamil expert, but just any Tamil speaker — a colleague, secondary school friend, or even a stranger.

That’s why he was incredulous that there was nobody who could identify the mistake, saying,

Didn’t you have one person to point out the mistake? ONE?!

In her Facebook post, she tagged a few Indian local politicians as well as 2 opposition parties, asking whether they think it’s an honest mistake. 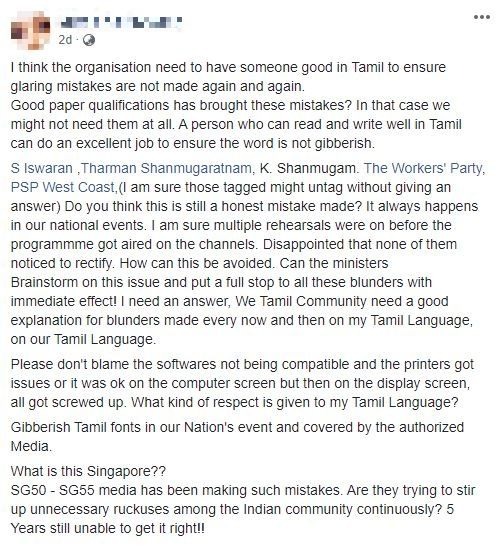 After all, she said, as with all NDP performances there must have been many rehearsals.

Why wasn’t the mistake noticed at any of them, she asked?

Like Mr Somasundaram, she also said we just need a person who can read and write in Tamil to do some proofreading.

Ms Kandasamy then said the Tamil community needed answers for the errors, alluding to a lack of respect given to her language.

Another netizen calls it humiliation & disrespect

In her Facebook post, she called the mistakes a “humiliation” and “blatant disrespect” to the language and the people who speak it. 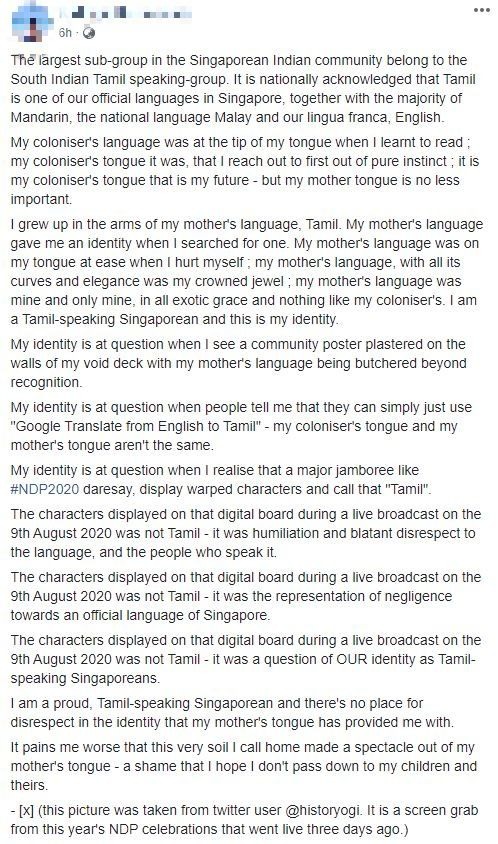 She also accused whoever was responsible for “negligence towards an official language of Singapore”.

Responding to the uproar, the organisers for NDP2020 have apologised, reported The Straits Times.

Brigadier-General Frederick Choo, who’s the chairman of the NDP2020 Executive Committee, said sorry on behalf of the committee for the “misaligned characters”.

He blamed the “animation effects” for the error, explaining,

All lyrics for projection were accurate prior to digital animation.

Gen Choo also revealed that committee had actually hired Tamil translators to ensure the Tamil lyrics and translations for the other performances were accurate.

He said that the organisers will “further strengthen the production process” and be “mindful for future NDPs”. 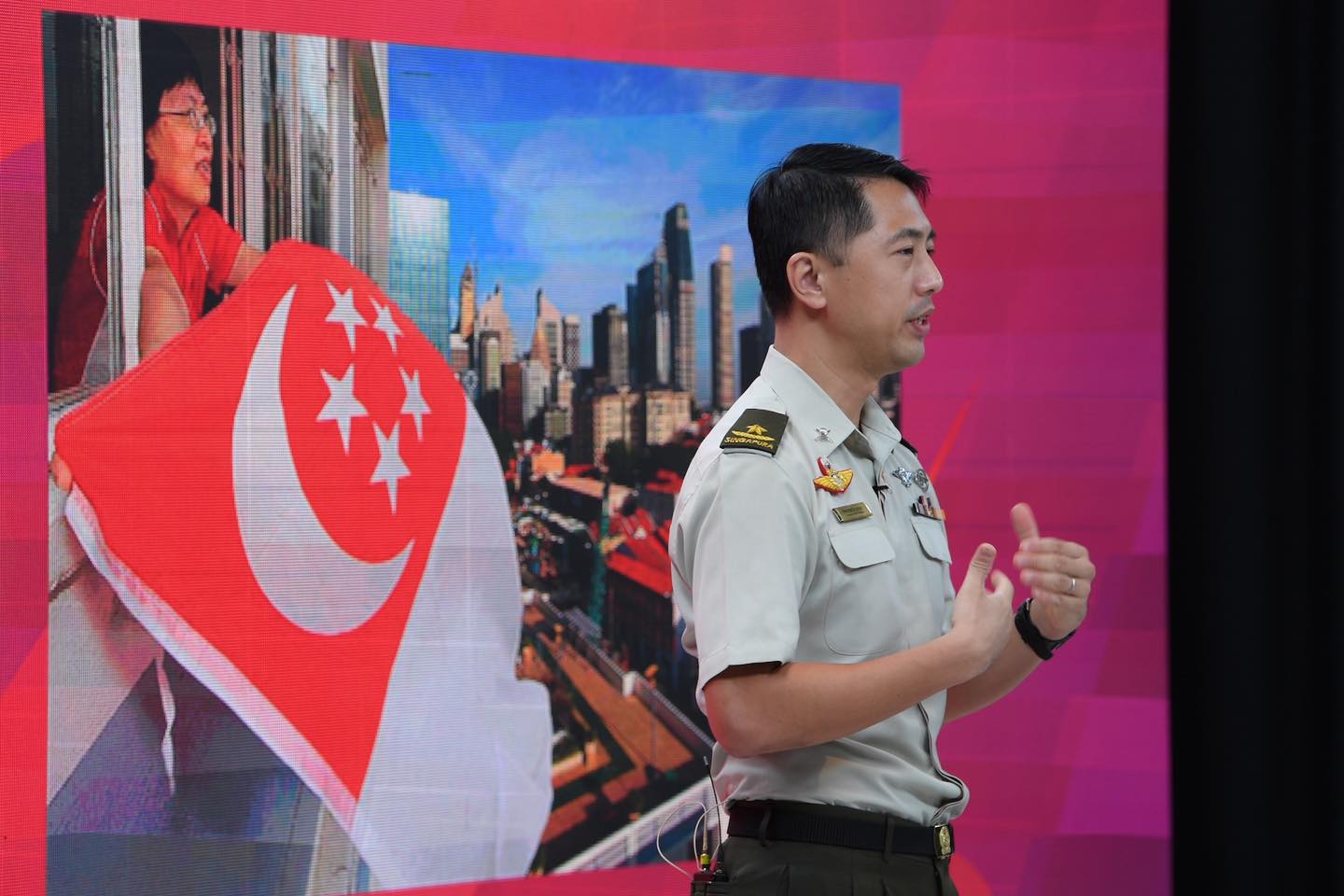 Netizen asks if extra care will be taken in future

Ms Kandasamy wasn’t appeased by the apology, asking whether extra care will be taken in future. 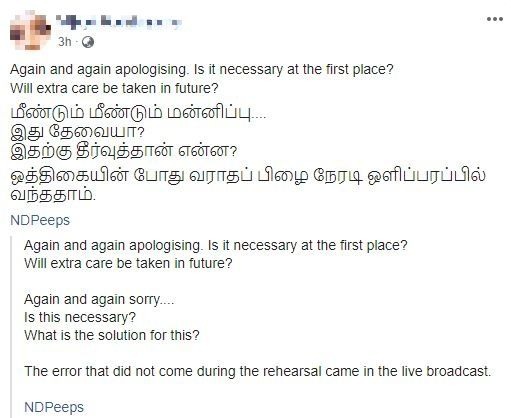 After all, she again pointed out that errors seemingly weren’t made or weren’t noticed during the rehearsal.

Thus, did the animation effects only screw up during the live performance, or were they not tested during the rehearsals?

The frustration of Mr Somasundaram and Ms Kandasamy also stems from the fact that this isn’t an isolated case.

It’s not even the first time a Tamil-language error has cropped up during the NDP. The organisers of NDP2017 also had to say sorry for mis-translating Tamil in its pamphlets, with missing characters and letters noticed.

Besides NDP, there’ve been quite a few cases of such errors in official communications.

For example, a notice by the Public Transport Council on lowered train fares, posted in 2017, was ridden with errors in the Tamil portion of the message. 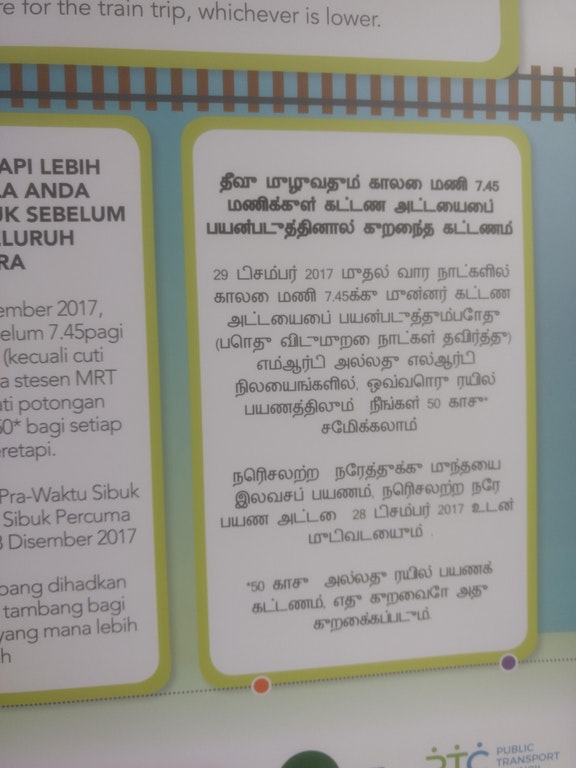 In 2015, it was found that the road sign pointing to hawker centre Lau Pa Sat had errors in its Tamil translation. 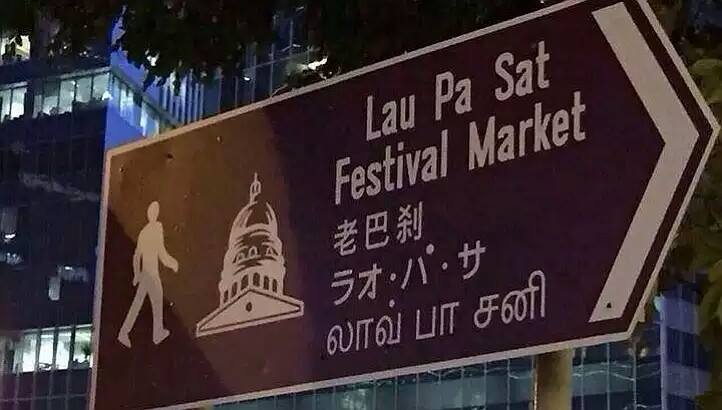 Way back in 2014, letters on the Pioneer Generation Package were garbled because the Tamil font was not available.

Many of the Tamil signs at Gardens By The Bay also had errors before they were amended.

There’s no excuse if we really value multiculturalism

While Tamil isn’t an easy language for people who don’t speak it, and reasons have been given for mistakes including printing and font issues (and now animation effects), these are all just excuses.

The bottom line is, Tamil is one of the official languages of Singapore, and it’s a language that a sizeable minority of Singaporeans speak.

Hence, if we truly value multiculturalism in Singapore, there’s no excuse for not having a Tamil speaker on every organising committee, proofreading team, logistics department and so on in Singapore.

Because we can’t truly make our Indian citizens feel like they belong until we realise the importance of respecting their language by getting it right, always.