When we think of the birth of a baby, our minds would usually go to a delivery room in a hospital. But for a couple in Singapore, the eventful arrival of their third child occurred in the back of a taxi en route to the National University Hospital (NUH).

While we’ve heard stories of taxi births before, we may not have quite as detailed an account as this couple has provided.

Instagram user @ahmadcupin took followers through the events via his IG stories, which we’ve summarised below.

In a series of IG stories on Tuesday (13 Apr 2021), Helmi narrated the events leading up to the birth of his daughter the morning before.

Past midnight on 12 Apr, his wife, Hafidzah, who had begun showing mild signs of labour told him that she was doing okay. The pair decided not to rush to the hospital, and so Helmi fell asleep at 3am after watching a football match.

At about 5.30am, Hafidzah woke him up to say that the contractions were intensifying. Regardless, she kept her cool, and even managed to take a shower.

Just 15 minutes later, however, she came rushing out of the bathroom, hastening her still half-asleep husband to do his morning prayers so they could leave quickly. 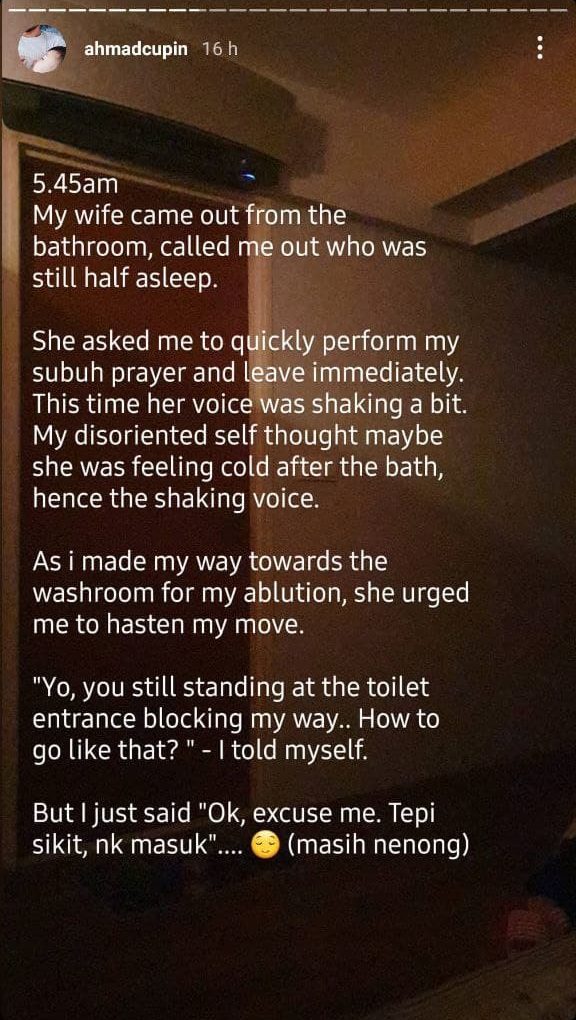 Having done that, Helmi returned to his room to see Hafidzah dressed up and ready to go. Thankfully, the couple had their ‘labour bag’ ready, and were able to book a taxi which arrived soon after.

Taxi driver stays focused on getting to the hospital quickly

The moment they entered the vehicle, Helmi described how the driver headed straight for their destination “without a word” after noticing his wife in pain. 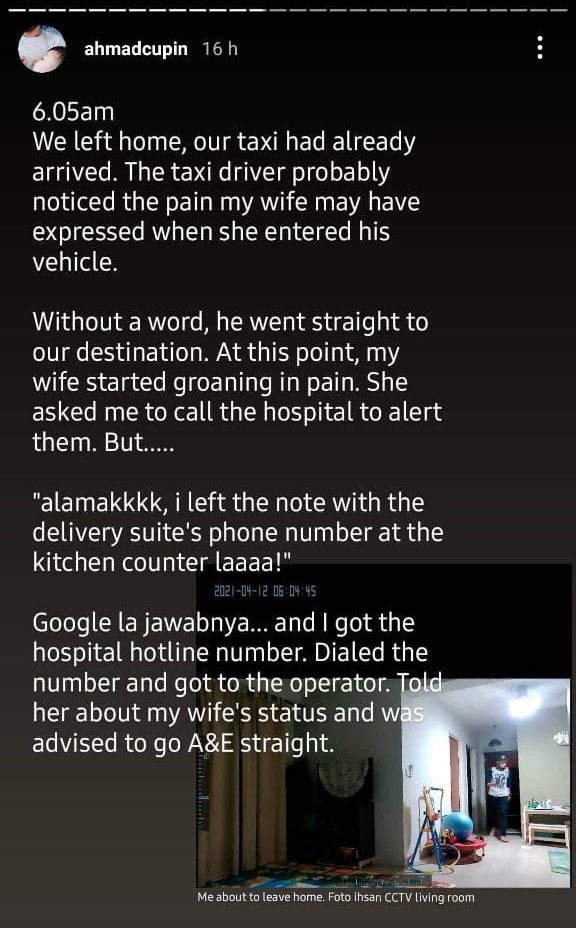 Several minutes later as the taxi entered the expressway, Hafidzah began breathing more heavily, trying to bear with the intensifying pain. Aware of the situation, the driver kept going “as fast as possible”.

Concerned for his wife, the quick-thinking Helmi checked the contraction timer app he had installed on his phone, and realised that she was already in her final stage of labour. He decided to hold her hand and recited some prayers to help soothe her. Helmi also tried other methods like massaging her.

No more than 2 minutes later, he got a shock when his wife “lifted her body up” and exclaimed that “it’s time”. 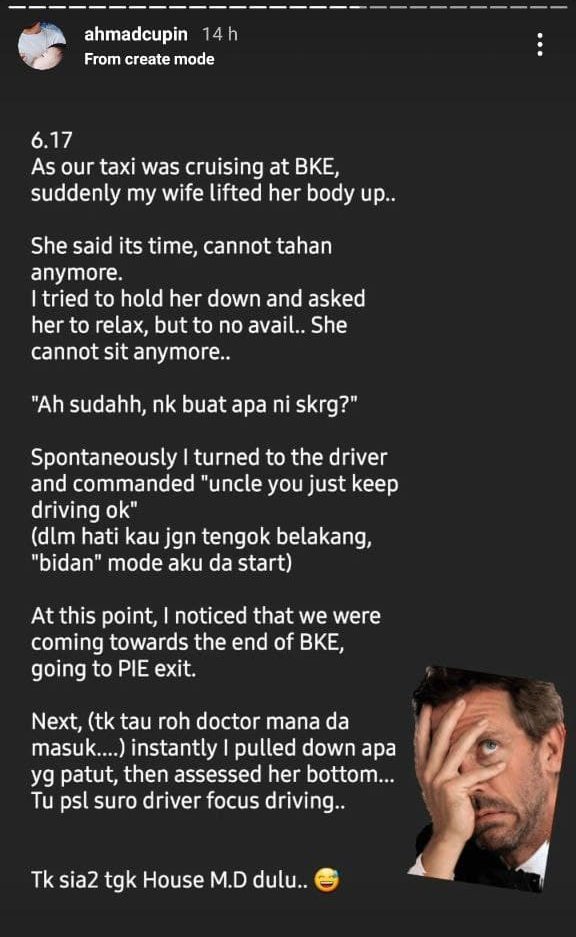 Without hesitation, he told the driver to keep driving and himself assumed “bidan mode” or ‘midwife mode’. Helmi even joked that he didn’t know which doctor’s spirit took over him, and that watching the House, M.D. TV series finally paid off.

Within moments of their baby crowning, Hafidzah was already pushing the infant out, and Helmi held their daughter in his hands in no time. 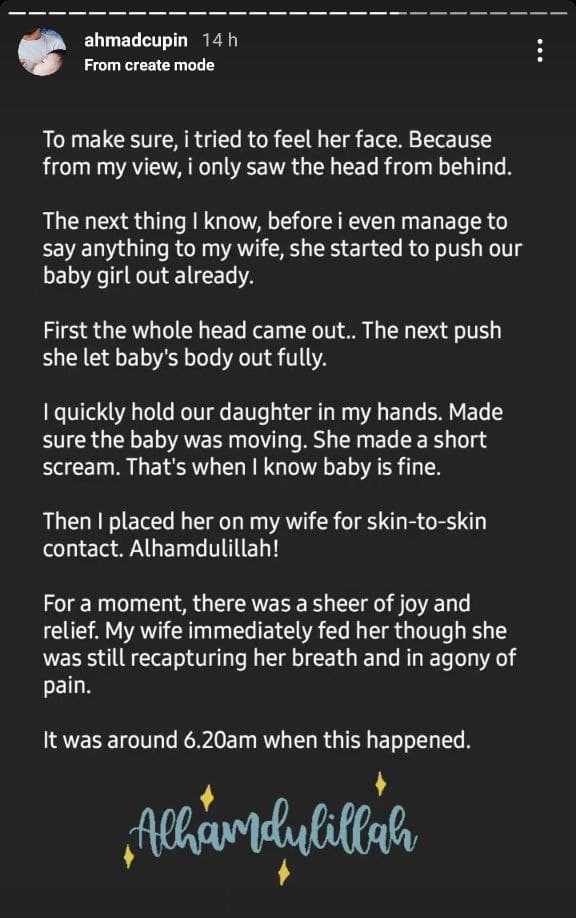 Making sure that the newborn was fine, he then held their daughter up to his wife for skin-to-skin contact.

Family makes it to NUH safely after taxi birth

After the ordeal, Helmi understandably needed time to recollect his thoughts.

Upon noticing that the umbilical cord was still attached and that the placenta had not fallen out yet, he called the hospital and sought professional help. 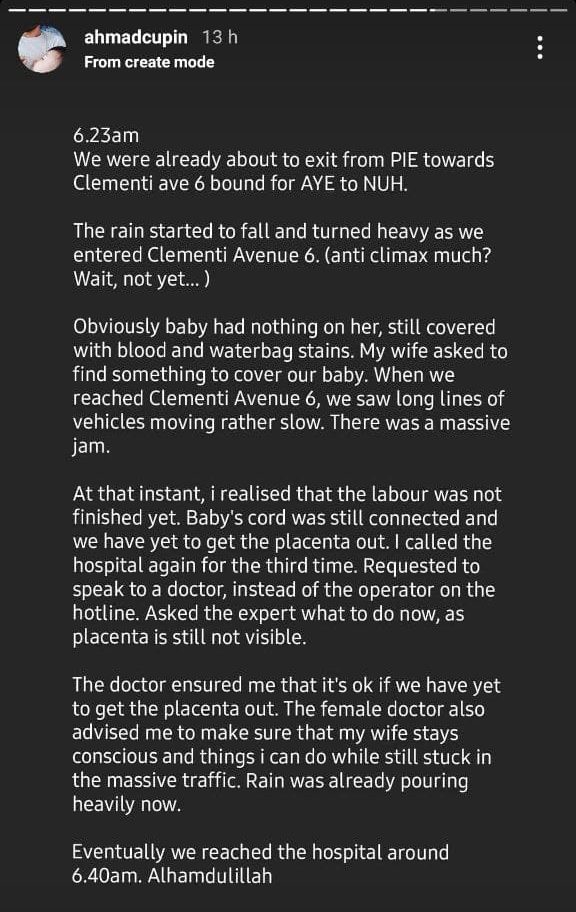 Luckily, he only had to make sure that his wife and baby remained conscious.

The family arrived safely at the hospital at around 6.40am, after driving through the morning downpour. Besides Helmi’s social media account, their baby’s birth certificate also immortalises the fateful day, as it mentions “motor vehicle” and “BKE” as the place of birth. 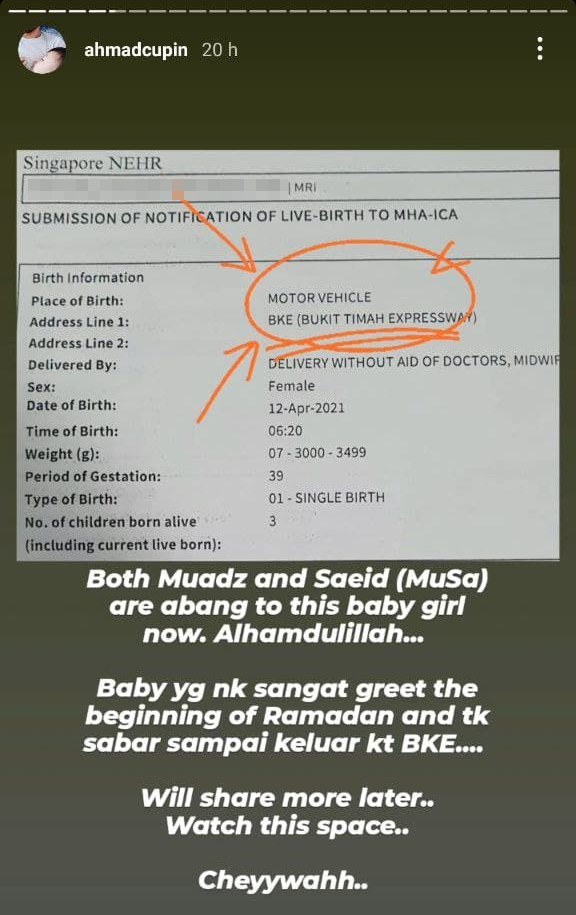 Speaking to MS News, Helmi had nothing but praise for his wife, who demonstrated great mental resilience. Her ability to understand her circumstances helped them to keep the situation under control. He said the same of the taxi driver, Mr Leo, whom he thought dealt with the stressful situation well.

Moreover, Helmi noted how Mr Leo showed no signs of annoyance, despite the situation unfolding in the back of his taxi.

He was calm, supportive, and kind. Which made me and my wife feel safe.

Upon dropping the family off, he even wished them “Selamat Hari Raya”, which Helmi took to mean “Happy fasting”, since they were approaching the fasting month.

Indeed, their baby’s arrival was a Ramadan blessing, especially with the smooth delivery. Per a religious practice, the couple is waiting till the newborn’s seventh day before naming her. They also have 2 older sons.

Name aside, Helmi hopes their daughter will grow up to have great resilience, like her mother showed when bringing her into this world.

Congratulations to the couple on their Ramadan joy

Welcoming a newborn into the world is a lifechanging affair, what more under such unique circumstances.

MS News extends our heartiest congratulations to the happy couple, and wish them much happiness and health.

May your bundle of Ramadan joy grow up to be as calm and collected as her parents, and become a wonderful daughter.