A glimpse of what the taxi uncle has been through.

Some jobs require us to face customers on a daily basis and while most of them are generally well-mannered, it only takes one bad experience to change our behaviour forever.

That might be what happened to a taxi driver whose disclaimer signs inside his cab recently went viral.

Plastered all around the backseat of his vehicle were disclaimer signs, each with its own mini-story.

Most of them sounded like they came from a despondent taxi driver, who has had one bad passenger too many.

Netizens naturally wondered what the taxi driver had been through to reach this point.

On Thursday (26 May), a picture apparently showing the inside of a peculiar taxi went viral on social media. Unlike most taxis, the cab in question has disclaimer signs plastered all over the inside of the vehicle, presumably for passengers to read.

The signs were written on sheets of paper, each detailing a different instruction.

A sign on the left side perhaps gives us an idea behind the reasoning for the signs.

The taxi driver also seems to have a sense of humour, as one of the signs plastered above everything else reads, “MY EYES SMALL BUT NOT SLEEPING!”.

Typed in much smaller font size than its counterparts, you’d have to squint to read the fine print. Intentional? Perhaps.

There is also a safety sign for what appears to be a broken fold-out table as well as a DIY advertisement for TADA, a lesser-known ride-sharing app.

The attention grabber though is this four-point manifesto written and plastered in the middle of the vehicle. 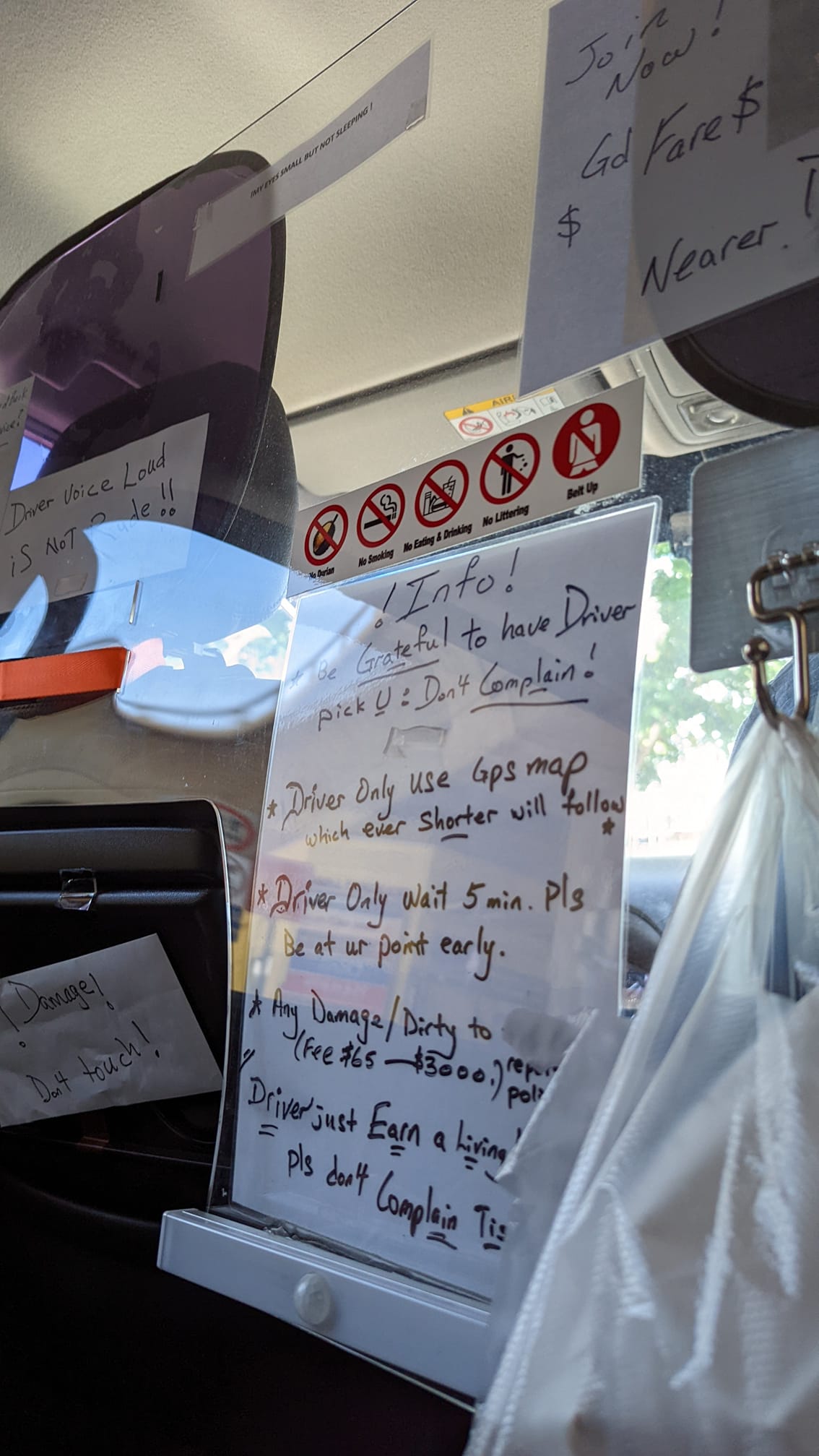 While the rest of the signs were relatively tame, this starts off by instructing the passenger to be grateful that a driver even picked them up. Doubling down the sentiment by asking passengers not to complain.

The next two points explain the taxi uncle’s rules which are — he will follow the shortest GPS route only and that he’ll wait for a maximum of five minutes.

Returning to the paggro tone, the fourth point explains that any passenger found guilty of damaging the car will have to pay a fee of between S$65 and S$3,000. They will also have their details reported to the police.

Lastly, in an attempt to provide context, the driver says he’s only trying to earn a living. He also shares that he drives for 13 hours a day so he’d rather not hear complaints about “tis n tat”.

Singaporeans are split on the plastered-up taxi, with some showing empathy while others criticising him for the paggro signs.

One netizen questions his methods and wonders if the signs would actually have an adverse effect on the taxi uncle’s ratings.

Another concerned folk also commented and empathised with the uncle’s long hours, knowing full well how tiring it can be.

However, someone who claimed to have sat in this taxi shared their less-than-ideal experience.

No one would truly know what drove the uncle to this point but we can all agree that there are perhaps better ways to put messages across.

Practise a little kindness towards one another

Driving in Singapore can be tough for anyone. From errant cyclists to inconsiderate drivers, there’s always an incident waiting to happen if you’re not vigilant.

To make things easier for everyone involved, let’s practise a little more kindness in our interactions.

If you were a passenger in this taxi, how would you react to the disclaimer signs? Let us know in the comments section below.