The Central Narcotics Bureau (CNB) plays an important role in Singapore by purging drugs and harmful substances out of our society. In this unrelenting war, they may take a no-nonsense approach to do their jobs. On Wednesday (13 Oct), the CNB released a statement on their Facebook page, clarifying their alleged abrasive arrest and investigation process of a teen earlier this year.

The case was of a 17-year-old who was arrested for drug trafficking offences. After his bail release, he allegedly took his own life about 3 months later.

His mother recently took to Instagram to call out the alleged mistreatment of her son in the custody of CNB officers and how that has attributed to his demise. She also sought reform to police procedures in their dealings with juvenile suspects. 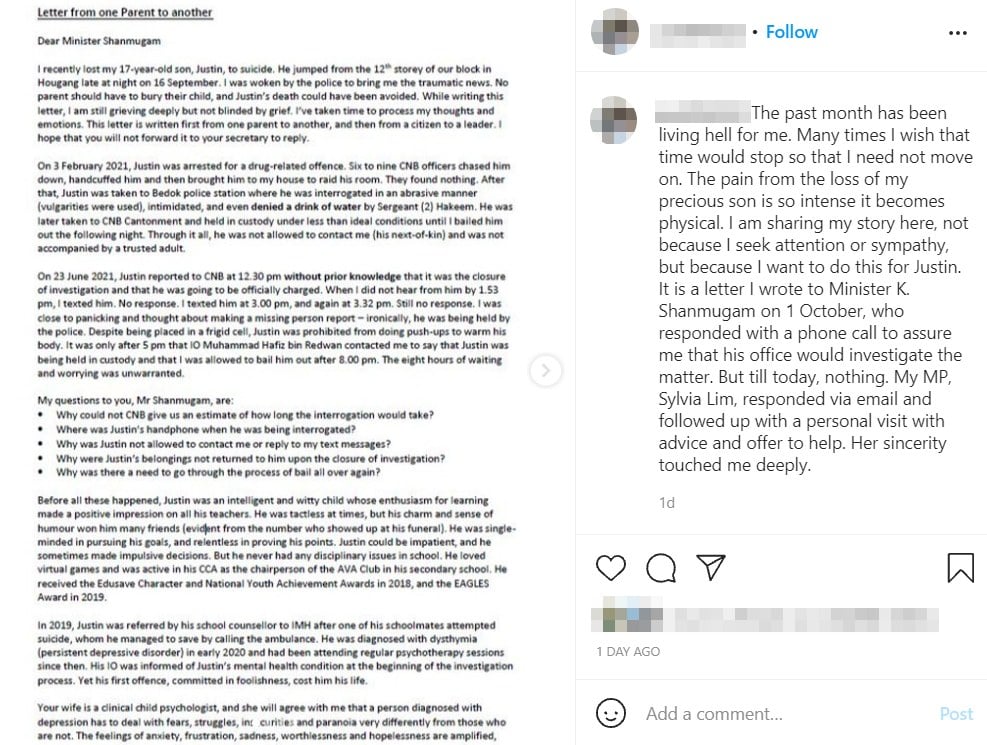 The Instagram post and its contents were sent to Law and Home Affairs Minister K Shanmugam on 1 Oct, who in turn assured the mother that the authorities will conduct a thorough review.

Investigations are ongoing and they will make the findings public when they are ready.

According to CNB, the teen was arrested on 3 Feb under the suspicion of trafficking a class A controlled drug online. Officers had recovered drugs belonging to the teen within the vicinity of the arrest.

It was during this time that the alleged abrasive arrest took place. The teen was released on bail the next day.

The Attorney-General’s Chambers (AGC) charged the teen for drug trafficking offences and told him to report to CNB headquarters in Jun.

He was served with the charges on 23 Jun and released the same day. The next day, he was charged in court and released on court bail.

CNB also clarified that upon hearing of the teen’s unfortunate passing, that they’ve been in constant contact with his mother.

They also assured her that a full internal investigation surrounding the circumstances of his arrest is ongoing and that she can expect the findings by end-October.  The Ministry of Home Affairs (MHA) intends to publish the findings publicly.

Minister Shanmugam, who received a letter from the mother, will also be providing support to her. She has received a direct contact line with the authorities should she require to reach out to them about the matter.

The teen’s mother shared her plea for reform on Instagram on 13 Oct. She listed alleged details of the arrest in the post.

According to her, 6 to 9 CNB officers had chased her son down, handcuffed him, and brought him to their home for a raid.

After that, he was taken to Bedok police station where he was interrogated in what she described to be an abrasive manner.

He was also allegedly intimidated and denied drinking water by the officers, who later took him to CNB Cantonment Police Station. He was held in custody in conditions that were described as “less than ideal”.

The officers released the teen on bail the next day.

Offering more details on the arrest in Jun, the teen had allegedly not had any prior knowledge that he was going to be officially charged on that day. He was reportedly held in custody once again before his mother bailed him out 8 hours after the teen entered the CNB offices.

Condolences to the mother for her unfortunate loss

MS News extends their condolences to the mother for her unfortunate loss.

We hope she finds closure once CNB concludes investigations.