We’ve all walked silently by an auntie or uncle with a heavy load of packet tissues asking us,

But a kind-hearted netizen has taken to Facebook to post a plea on behalf of one such auntie — an 83-year-old lady who hawks tissues daily outside Tiong Bahru Plaza.

According to him, she’s there from 9am to 3pm everyday, come rain or shine. Most of all, he shares that she actually walks from her house at Bukit Merah to Tiong Bahru – and back – just to save money on the bus fare.

Here’s his touching post on Sunday (24 Feb) in full. 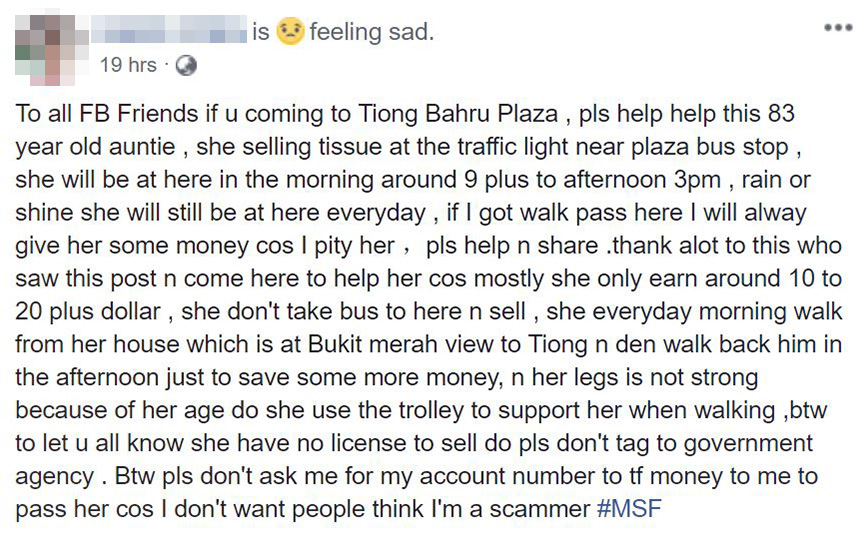 The netizen chanced upon the 83-year-old auntie’s plight after locating her near a bus stop outside Tiong Bahru Plaza. She allegedly lugs a heavy trolley to sell her tissues everyday, under the shade of an old umbrella. 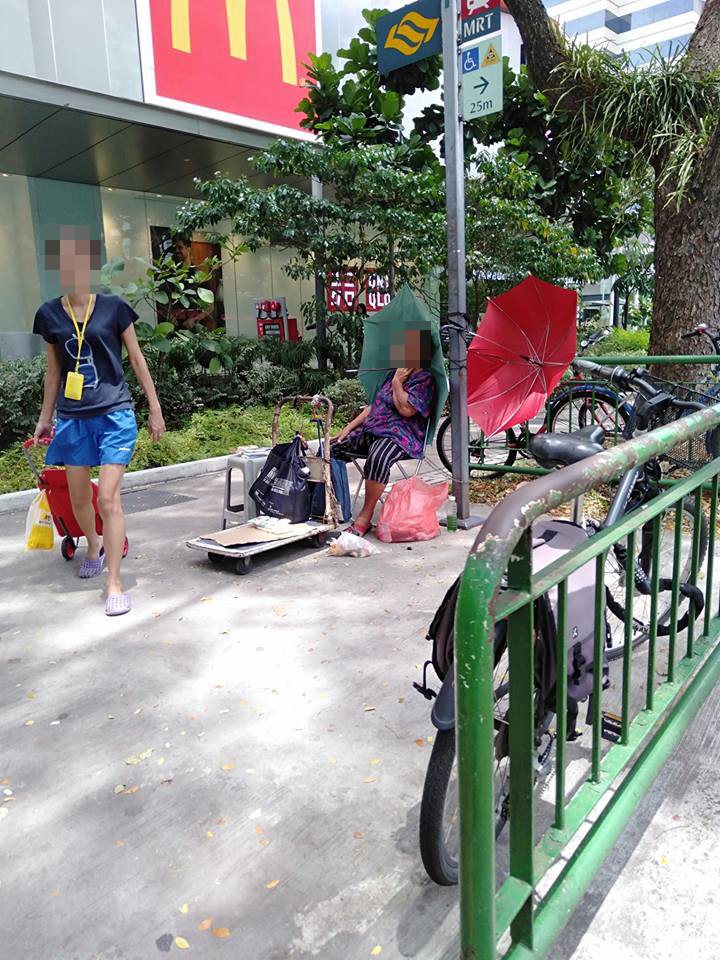 Her legs aren’t strong because of her age, and she uses the trolley to “support her while walking”, shares the netizen.

The elderly auntie’s gruelling routine continues from 9am to 3pm daily, regardless of the weather.

He shares that he will always “give her some money” as he pities her — she gets by on about $10 to $20 a day. Due to her low income, she resorts to walking to her spot at Tiong Bahru, from her house at Bukit Merah just to “save some more money”.

Doesn’t have an official license

The netizen fears that her legs will eventually give way due to her old age. Finally, he asks for commentors not to tag government agencies as she has no official license to sell anything.

After the post went viral, he allegedly received requests for his personal account number as well. But he’s declined monetary transfers to help her, as he doesn’t want to come across as a “scammer”.

Although the compassionate netizen is seeking to assist this elderly lady, by raising awareness on her plight, other commentors have jumped in to provide alternative solutions to helping her.

This comment, for example, requests that the netizen call the hotline by Ministry of Social & Family Development (MSF), who will help send a representative down to find out more about her situation.

We trust that she won’t be prosecuted for illegally selling tissue packets, without the authorities first securing and prioritising her day-to-day welfare.

Although this elderly auntie’s heartbreaking situation tugs at our heartstrings, we can do much more as a society than chipping in daily to buy tissues from her.

In this sense, she’s truly not alone in her plight.

We think that elderly members of society deserves stability in their golden years, and companionship as well. Hopefully, a lasting solution will be found soon to provide tangible help and avenues for assistance for seniors like her, all around Singapore.