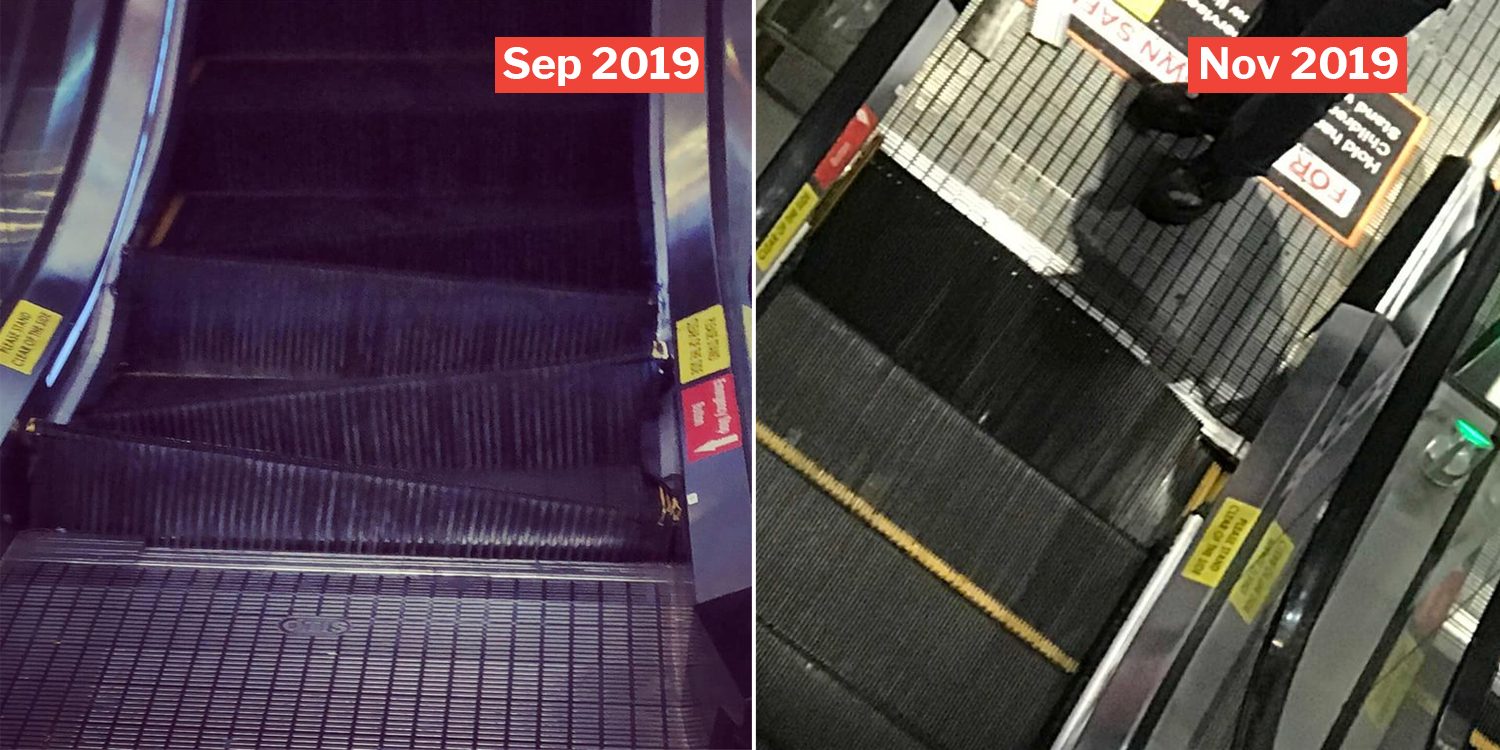 The escalator first malfunctioned in Sep 2019.

Update (2 Dec): A spokesperson from Waterway Point has responded to MS News queries on behalf of Frasers Property Singapore, which manages Waterway Point.

At around 3.45pm on Friday (Nov 29), an escalator at Waterway Point Basement 1 suffered a malfunction after the wheels of a pram caused some steps to be dislodged.

There were no injuries reported. The affected area was cordoned off, and security personnel were on site to re-direct customers.

In this particular case, our investigation showed that the wheels on a pram that was used on the escalator got caught and wedged between the escalator steps. This caused the steps to be unable to retract normally into the escalator pit. The steps thus dislodged and this triggered the safety mechanism to stop the escalator from operating.

We would like to remind shoppers with prams and trolleys to use our elevators instead.

For the safety of all shoppers, we would like to remind everyone to refrain from using trolleys and prams on escalators.

Back in September, an escalator at Waterway Point was ‘attacked by’ the menacing Breakdown Monster.

Here’s the nasty aftermath of the ‘attack’: 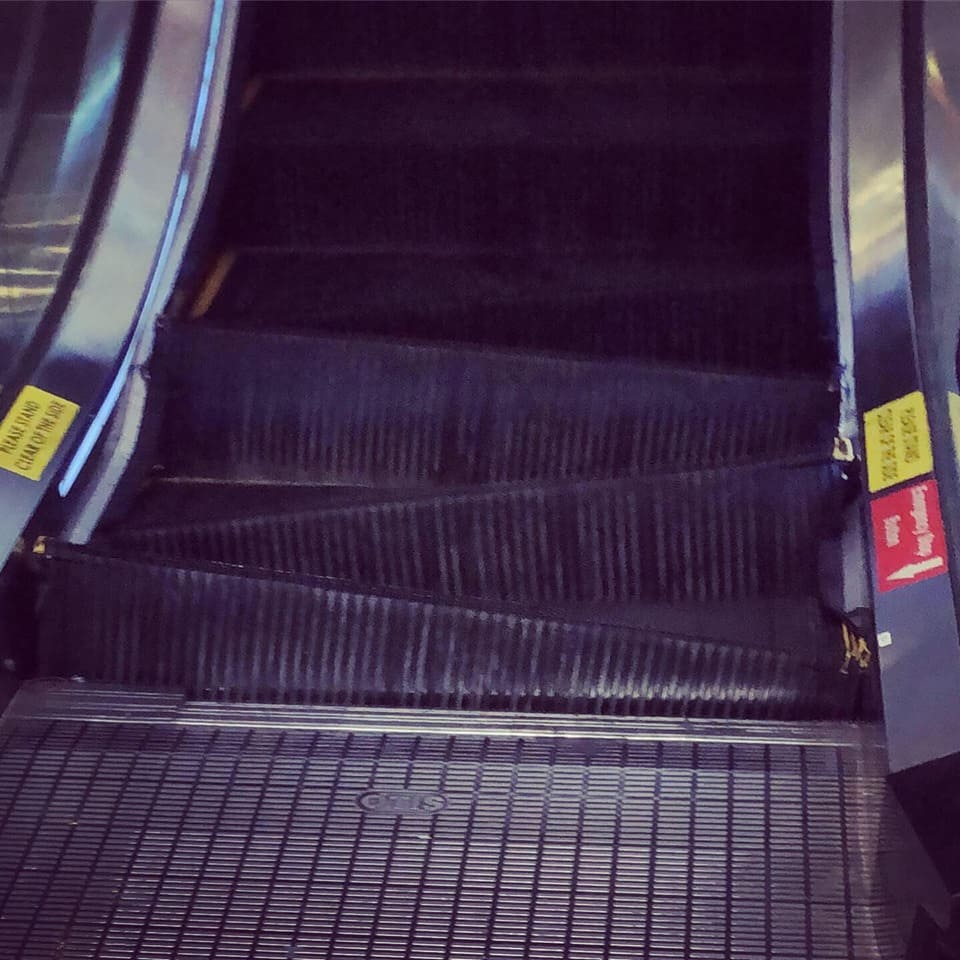 On Friday (29 Nov) the Breakdown Monster allegedly returned and ‘assaulted’ the same escalator that he wreaked havoc on 2 months ago. 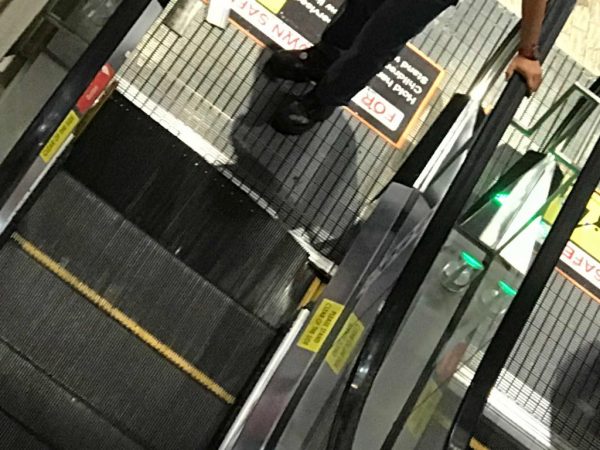 A mother named Pris, together with her infant was at the scene when the terrifying ‘attack’ happened.

She penned the close-shave experience on a blog named Punggol Babies.

According to the blog post, Pris was at Waterway Point with her infant on the day of the ‘attack’.

Pris, who was carrying her infant on a carrier, was just “a step away from” the escalator when she allegedly heard “loud clanking sounds”. 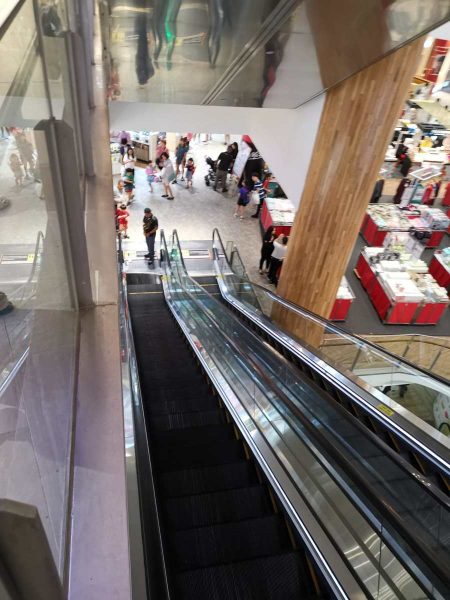 Soon after, the steps dislodged before her.

Presumably shocked by the events that unfolded before her, Pris recalled that her arms were shivering while hugging her child.

She then turned around and warned others to “go back up” so they do not get injured by the faulty machinery.

Pris wrote in her post that she was in disbelief as the exact same escalator had just dislodged 2 months ago.

In light of this, she urged the maintenance team to conduct a thorough investigation into the repair works carried out on the escalator prior to the incident.

Hope the maintenance team will carry out a thorough investigation

We hope nobody was injured as a result of this incident and hope that the maintenance team will carry out a thorough investigation to find out why the escalator is so prone to such incidents.

MS News has reached out to Waterway Point for a statement regarding the incident and will update this article accordingly.