She also asked if they could offer 57 breakfast sets to her followers and friends.

UPDATE (2pm, 11 Aug): In an update on Thursday (11 Aug) afternoon, Nicole shared that Ya Kun Kaya Toast will be offering 57 complimentary kaya toast sets for her followers.

More information on the promo codes will be released soon via her Instagram stories.

National Day isn’t just an occasion for Singaporeans to celebrate our patriotism, but also a good opportunity to take stock of the things we’re grateful for while bracing ourselves for the challenges ahead.

When asked about what she was thankful for during NDP 2022, content creator Nicole Liel candidly expressed her appreciation for HDB for giving her a BTO queue number. She also gave a surprise shoutout to Ya Kun Kaya Toast.

In a hilarious turn of events, the breakfast chain reached out to Nicole and offered her 57 cups of kopi.

NDP 2022 will be remembered, at least in the foreseeable future, for the crying man and the parachutist who unfortunately suffered a hard landing.

However, a highlight that flew slightly under the radar was when Nicole and her best friend shared what they were grateful for in Singapore.

When it came to Nicole’s turn to respond, she hilariously thanked HDB for giving her a BTO queue number, which resulted in a rousing reaction from the audience.

After the applause subsided, she seemingly signalled to host Rishi Budhrani that she had forgotten to make another mention.

Leaning toward the mic, Nicole exclaimed, “And to Ya Kun Kaya Toast”, which incited a similarly passionate reaction from the crowd.

Breakfast chain offers lady free kopi or teh after shoutout

Shortly after the parade, Ya Kun Kaya Toast reached out to the 24-year-old to thank her for the unexpected shoutout.

Sharing the conversation via a TikTok clip on Wednesday (10 Aug), Nicole said the breakfast chain offered her 57 cups of kopi or teh for free.

Describing herself as a “thick-skinned Singaporean”, Nicole requested for an “upsize”, asking if it was possible to get their signature kaya toast as well, considering how much she loves their butter.

Perhaps wanting to share the perks with her followers, the content creator even asked if Ya Kun could give 57 ‘Set A’ value meals to them.

Even if they couldn’t do so, she suggested alternatives like discounts or promo codes in the spirt of National Day.

To get the request going, Nicole urged her followers to “spam” Ya Kun Kaya Toast’s Instagram page in hopes of multiplying the number of complimentary set meals from 57 to 570.

Judging by the comments on their latest Instagram post, we can see that Nicole’s call to action had great effect. 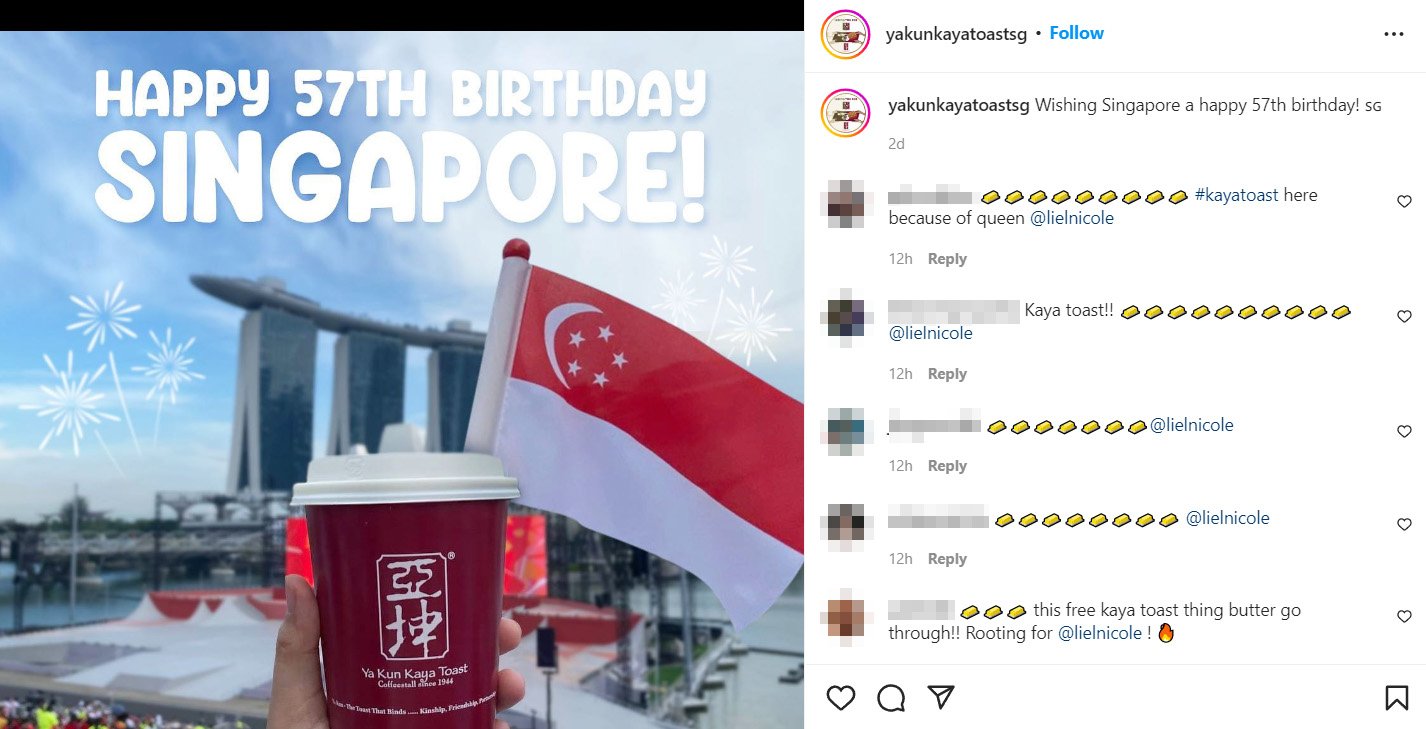 Many users left comments tagging her and spamming what appears to be the butter emoji.

Free toasts, kopi & teh for everybody

Nicole’s candid response at NDP 2022 was certainly one of the underrated highlights of the parade.

Besides amusing viewers there and at home, we’re glad her shoutout earned her some gifts from her favourite breakfast chain.

Hopefully, the responses she has helped to generate will bring good tidings for other Ya Kun fans too. Who knows, we’ll be able to claim freebies or discounts at the popular breakfast chain soon.

Featured image adapted from @lielnicole on TikTok and Ya Kun Kaya Toast on Facebook.