The body suits aren’t the only things you’ll be checking out…. *wink*

What an average Singaporean will tweet about Zentai: WTF ROFLMAO I thought Australia’s Snuff Puppets were weird enough ?! ! ?! !

What an average Singaporean really thinks about Zentai: Y dey not naked 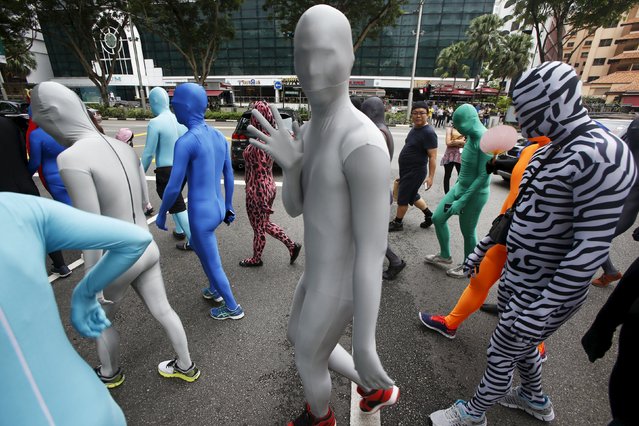 So, what exactly is Zentai?

I can’t think of a better explanation than ‘tight body suits which will make passers-by sexually frustrated’, but I’m obliged to give you a legit explanation, so:

Which means almost 50 weirdos strutted their stuff all over Orchard Road in body hugging suits during the three-hour flash mob style parade.

The Zentai festivities continue until 5 June. Next in line: Zentai Day performances on 30 May held at the Japan Creative Centre.

This is the second time this year that the Zentai Walk is happening in Singapore. The festival debuted here last year. Yes, this madness has happened before.

My two cents on the Zentai craze

I know ‘Zentai craze’ means ‘love and adoration from Zentai enthusiasts’, but I personally think that what’s actually crazy is Zentai itself.

This is what organiser Yuzuru Maeda has to say about Zentai:

“For me, Zentai is about having no identity. When I see the group of people standing, I see men and women but I don’t see anything more. And I think it’s good enough, to be just men and women. But I believe it’s also about transformation, where you can role play differently from your ordinary life . It’s the same idea when people want to be a superhero, it’s like we want to be somebody else.”

And guurrrl, I get you, I get your philosophy. I’m not so much of an artsy person tbh, but art is everything. Art is expression, and the human body stripped bare is the perfect canvas.

But you know, just because it’s art, it doesn’t mean there won’t be a random pervy uncle boner accident after three hours of looking at colourful boobs. #JustSayin