After a traffic accident, it’s only natural for the ‘victim’ to ask for compensation from the motorist who had collided into the vehicle.

That too, happened in the aftermath of this accident that you’re about to read about. But instead of asking for payment in the hundreds or thousands, the driver whose car was damaged instead asked for just $1.

On Thursday (9 Jul), a video was shared on the Beh Chia Lor – Singapore Road Facebook page, showing footage of the accident, and the heartwarming texts between the motorists afterwards. 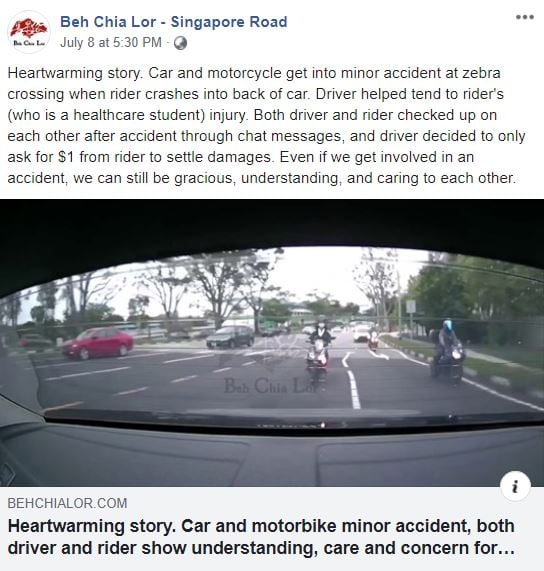 According to Beh Chia Lor, the accident apparently took place on last Friday (3 Jul) at around 7.20am.

At the start of the video, the car was seen coming to a sudden stop ahead of a zebra crossing, allowing a cyclist to cross. 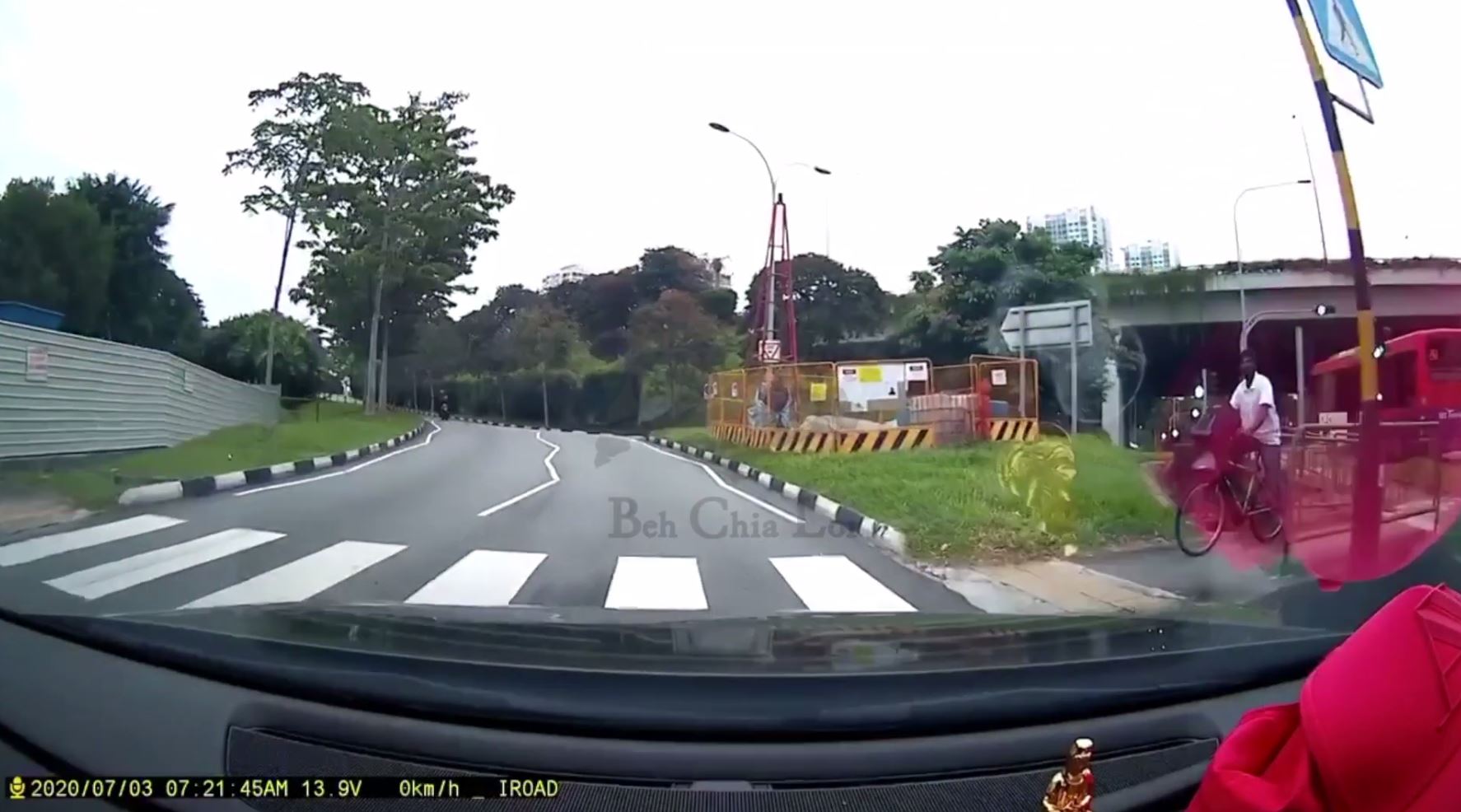 The clip then transitions to the car’s rear footage.

A blue scooter was seen travelling behind the car but appears to have difficulties coming to a stop. As a result, the rider skidded and collided into the car ahead.

The minor collision appears to have left the car with a dent and some scratches behind the left rear wheel, as seen in the image below: 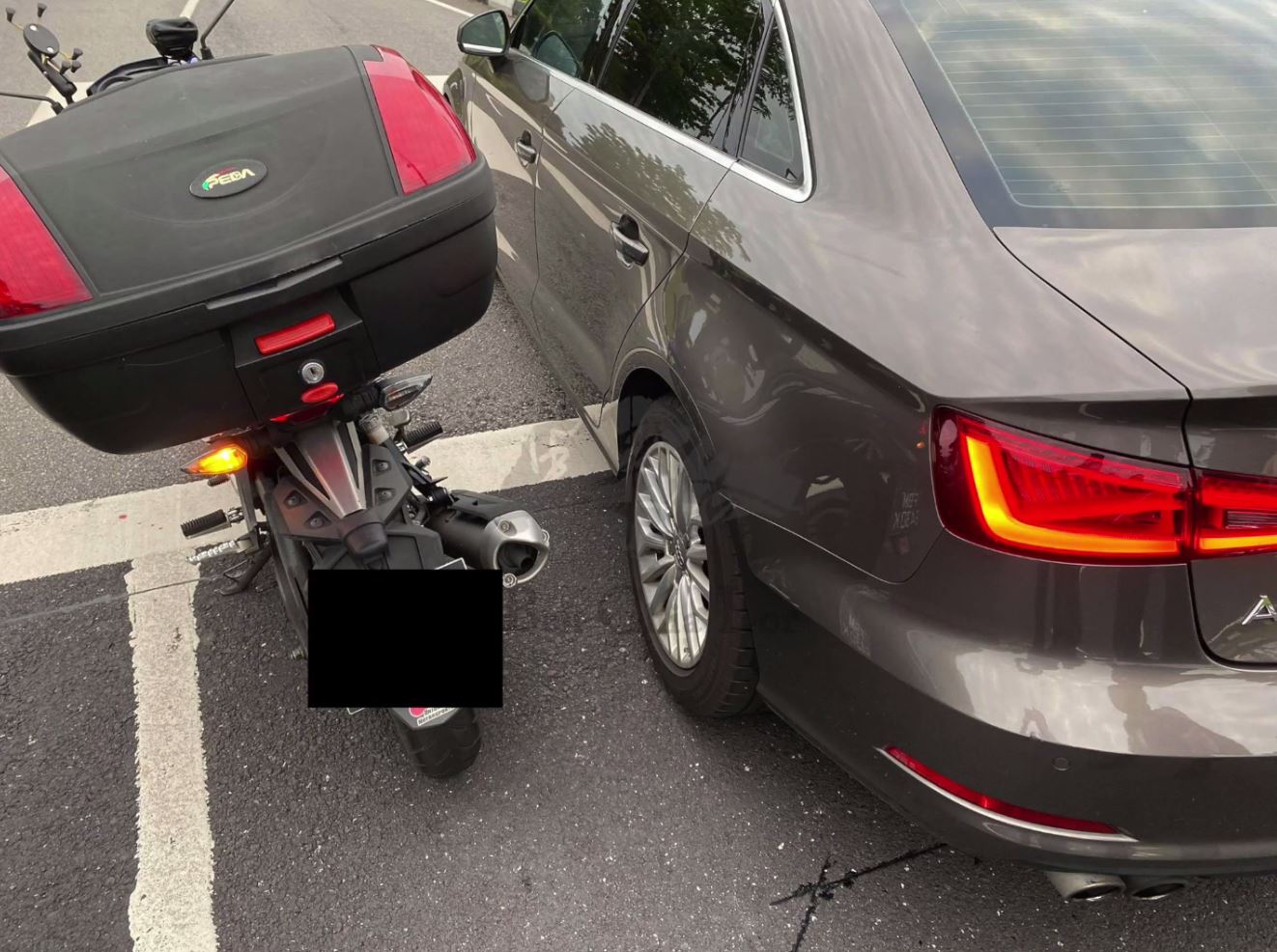 The rider allegedly suffered a “big” cut to the leg too.

The clip then goes on to show what was allegedly texts between the 2 motorists, with the Audi driver advising the rider to wash and bandage the wound. 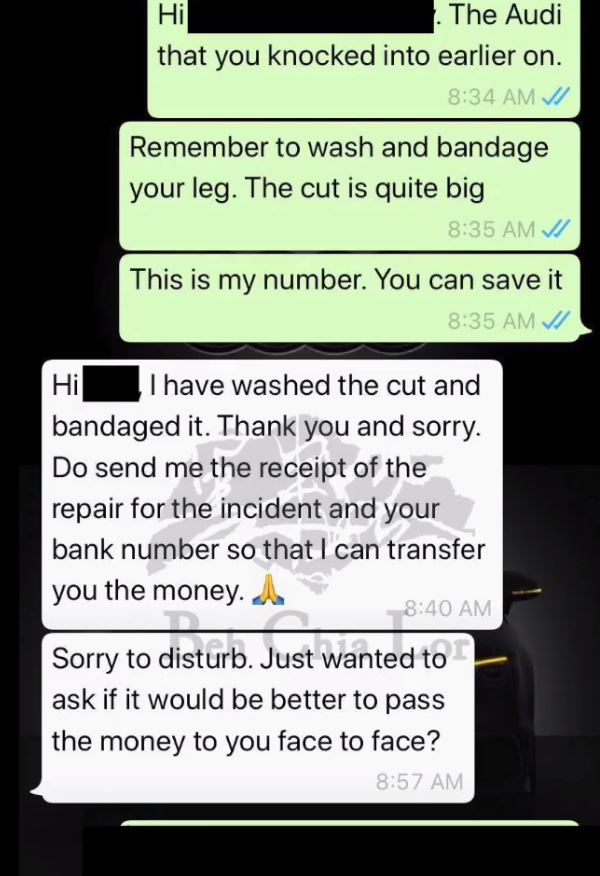 In response, the rider apparently reminded the driver to send the receipt for the repair so he/she knows how much to transfer.

The video then cuts to another portion of their conversation, where the driver again asked about the state of the injury.

It was then when the story took a wholesome turn. Noting that the rider was a healthcare student, the driver said that a $1 compensation would suffice for the damages. Hope other motorists will be encouraged to do the same

Earlier this year, a Porche owner also insisted on just a $1 compensation from a cabbie for scratches sustained during an accident. You can read more about the story here.

Drivers like them show us that we can still be compassionate and empathetic despite being ‘victims’ of a traffic accident.

We hope other motorists will be motivated to do the same after reading about their stories, making our roads a gracious place for all.