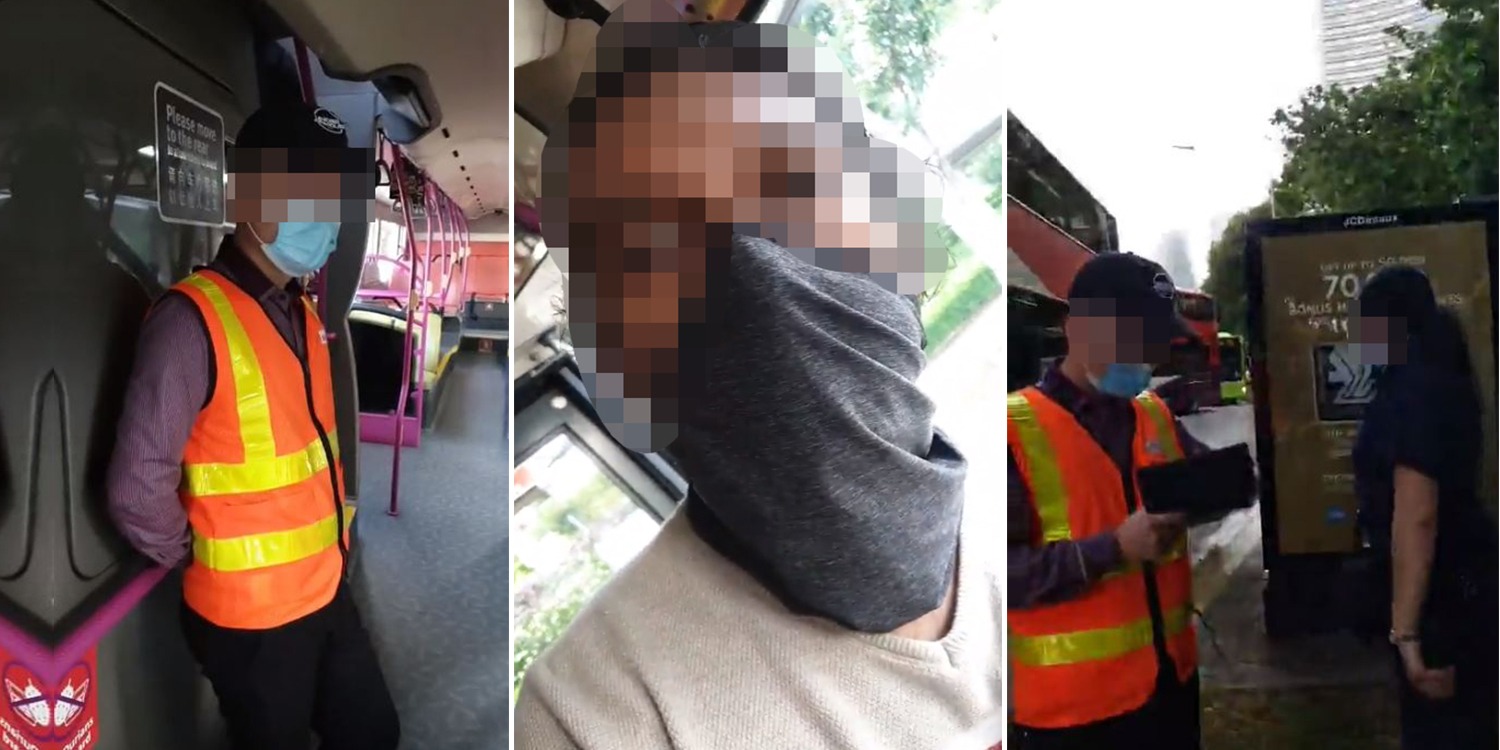 UPDATE (20 Aug, 2.24pm): SBS Transit has issued a full statement on the matter, and similar cases within the past week. We’ve updated the article in full below.

A dispute between a passenger and bus driver over whether a cloth ‘mask’ is considered ample protection & in accordance with Covid-19 safety regulations has gone viral on Wednesday (19 Aug).

In the 15-min video, a male passenger can be heard questioning why he was refused entry on a local bus by the driver, while clad in a cloth wrap from his neck up.

You can watch the clip in full here, posted on Wednesday (19 Aug). We summarise the incident below.

The video has garnered over 2.1k shares at the time of writing, with netizens weighing in on how we can prevent similar incidents in the future.

Dispute over bus entry due to ‘mask’

The video begins with the passenger introducing his identity.

He then claims the bus driver has not allowed him to board the vehicle due to him “not wearing a mask”. 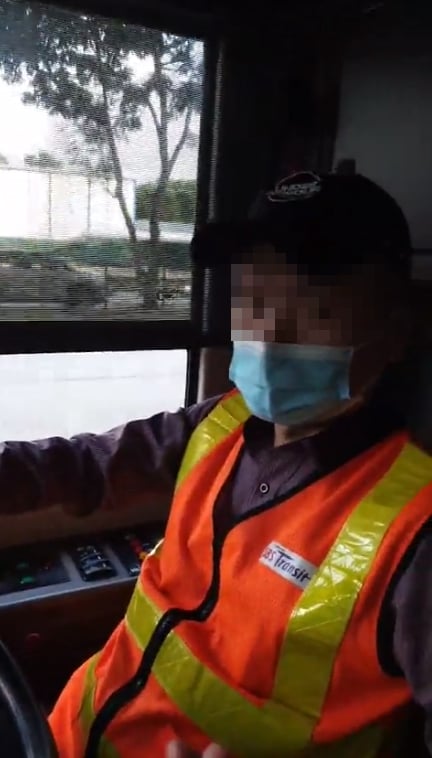 Next, he flips the camera on himself to show he is clad in a cloth wrap from the neck up to illustrate his point.

However, the bus driver doesn’t seem to agree that what the passenger is wearing constitutes proper mask protocol.

He appears to call for assistance within the driver’s cockpit, speaking in Mandarin. We’ve translated what he said in English here,

I’m with a passenger now…But he’s not wearing a proper mask. He’s wearing a cloth as a mask. Is that allowed?

The keyword in question is ‘面巾’, translated in English as a ‘washcloth’, which later on becomes central in the disagreement.

The bus remains at a standstill as the dispute continues to unfold.

As the bus driver seeks clarity on the protocol, the passenger appears to feel frustrated by not being able to understand the exchange, sharing,

This is the problem when you have China people working in Singapore. I’m going Facebook live right now.

The passenger later mentions, “ask them to learn to speak English”, while the bus driver continues to explain his side of the story.

When asked over the intercom on how the passenger had boarded, the bus driver claims he had held the doors open himself, but was wearing a ‘cloth wrap’ instead of a proper mask.

At the 2-min mark of the exchange, a fellow passenger clad in a surgical mask – described as a “kind Singaporean guy stepping in” came to check on the duo. 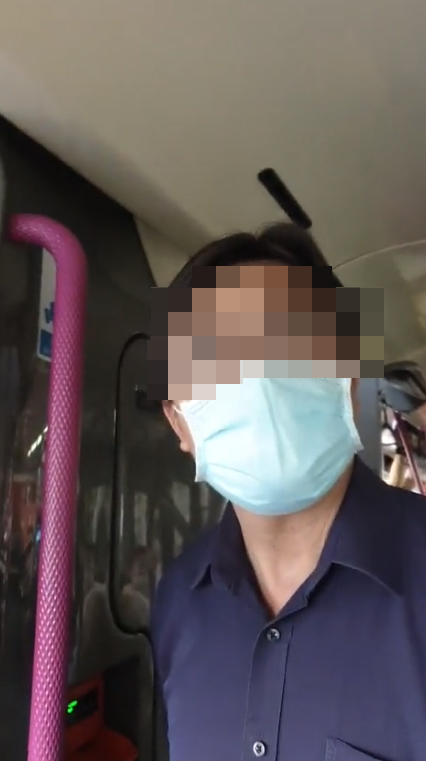 At this point, the bus driver reiterated the scenario over the call, and added at the end of his summary,

This was overheard by the second passenger who asks the bus driver in Mandarin,

He was presumably trying to step in to act as a translator & mediator.

At the 2.50-min mark, he even offers to give the OP a free mask, pointing out that the rest of the passengers “didn’t have time” and were running late.

However, the bus driver had received instructions to call the police by then.

Explaining in Mandarin, he converses with second passenger, stating he wasn’t sure if the cloth wrap was considered a “mask”.

The first passenger then points out that the bus driver’s own mask had been worn incorrectly, exposing his nose. 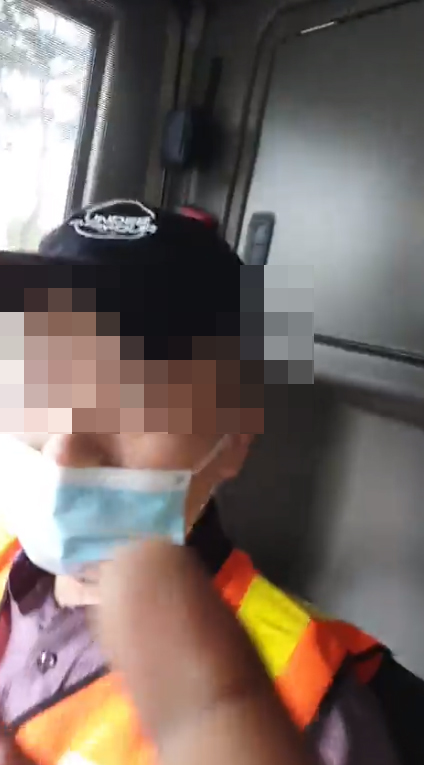 The bus driver quickly corrects this as the passenger gets increasingly frustrated.

Dispute escalates as other passengers are delayed

After the decision was made to call the police, the bus driver explained to passengers that it was part of safety regulations to ensure that all were masked. 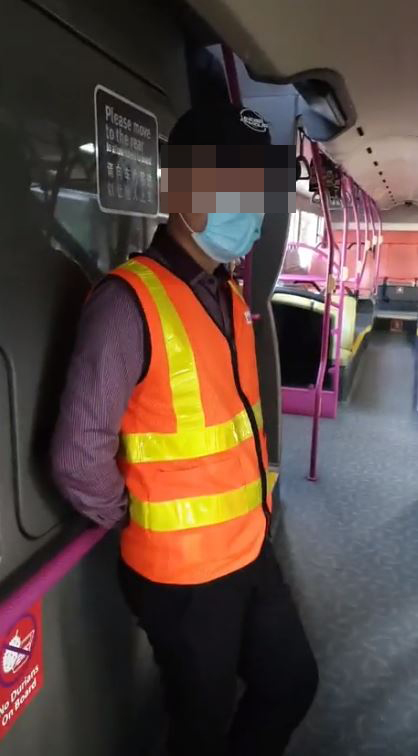 The OP reiterates this wouldn’t have happened if the company “hired locals”.

That’s when the bus driver explains in Mandarin,

Whether we are from overseas, or from Singapore. We’re all the same. This is the regulation.

All the passengers begin leaving the bus, as the pair wait for the police to arrive.

Police split duo up to mediate

2 police personnel arrive within the next 5 minutes, and the passenger is asked to step off the bus first.

The pair is split up and they each talk to one officer.

A policeman asks the passenger if the mask is “ownself make” or purchased. To which the passenger replies that he bought it “from online”.

The policeman asks to see a purchase receipt, but the passenger claims he does not have it with him at the moment. 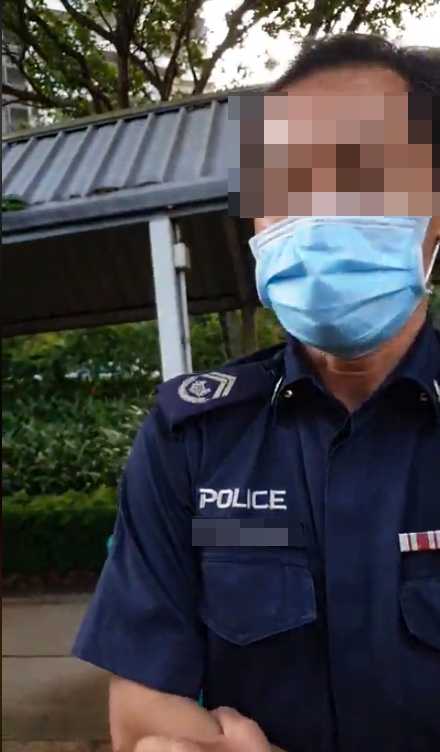 He then alleges that the bus driver was “racist”. The policeman asks the passenger to elaborate on his claims, and the passenger reiterates the dispute over “wearing a mask”.

Finally, the video ends with the policeman telling the passenger that the issue will have to be delivered as feedback to the bus driver’s company.

Though the dispute is ongoing, netizens have shared the video widely & are adopting views across the spectrum.

Some have expressed support for the bus captain for remaining “professional”.

This netizen also questioned whether it was safe if the OP had forcefully entered the bus, based on the bus driver’s account.

Others opined that they didn’t consider what the OP was wearing as a “proper mask”.

Trawling through most of the comments on the video, it seems the general consensus is that more could have been done to improve communication between passenger and bus driver to mediate the dispute.

Rules for masks on public transport

The rule for wearing masks on public transport dates back to 4 months ago, documented in then-Transport Minister Khaw Boon Wan’s Facebook post.

With the reopening of public transport, he described it as a “practical compromise” for all commuters to “wear masks” when they used “public transport”.

This was to minimise risks of Covid-19 transmission post-Circuit Breaker.

Of course, what needs further clarification is if transport operators considers what this passenger was wearing a proper ‘mask’.

Here’s her statement in full.

Wearing a mask and using it correctly on public transport is mandatory as part of a national effort to prevent the spread of COVID-19. Our Bus Captains have a duty to ensure that all commuters don masks and wear them properly.

Unfortunately, there has been 3 incidents now where our Bus Captains have been harassed and even abused when they were carrying out their professional duties. One happened last week and 2 this week.

In yesterday’s situation, our Bus Captain was unsure if the man’s wrap qualified as a mask and sought clarification from our Operations Control Centre. He was trying to do his job but was unfortunately ridiculed by the commuter who not only filmed him but also made disparaging comments.

In another incident earlier this morning, a Bus Captain advised a commuter to put on his mask properly as it did not cover his nose. The man subsequently engaged in a conversation with another commuter and pulled down his mask further which exposed his mouth too. He was again advised to put on his mask but responded by scolding the Bus Captain. The man later alighted and re-boarded from the front and confronted the Bus Captain where he physically abused him by grabbing his shirt, resulting in some buttons becoming undone.

We take these acts of harassment against our Bus Captains seriously as they are frontline workers providing an essential service.

The Police is currently investigating both incidents and we are assisting by sharing the CCTV footage with them.

They’ll also treat “acts of harrassment” seriously as they are frontline staff providing “an essential service”.

Finally, they’ll also be assisting the police in investigations regarding these cases.

Kudos to police & other passengers for keeping their cool

We do want to give kudos to the bus driver for keeping his cool, all passengers who offered to help translate or give a mask to the passenger, and the 2 police officers who stepped forward to handle the delicate situation professionally.

Do share your thoughts on how we can avoid similar incidents, in the comments below.