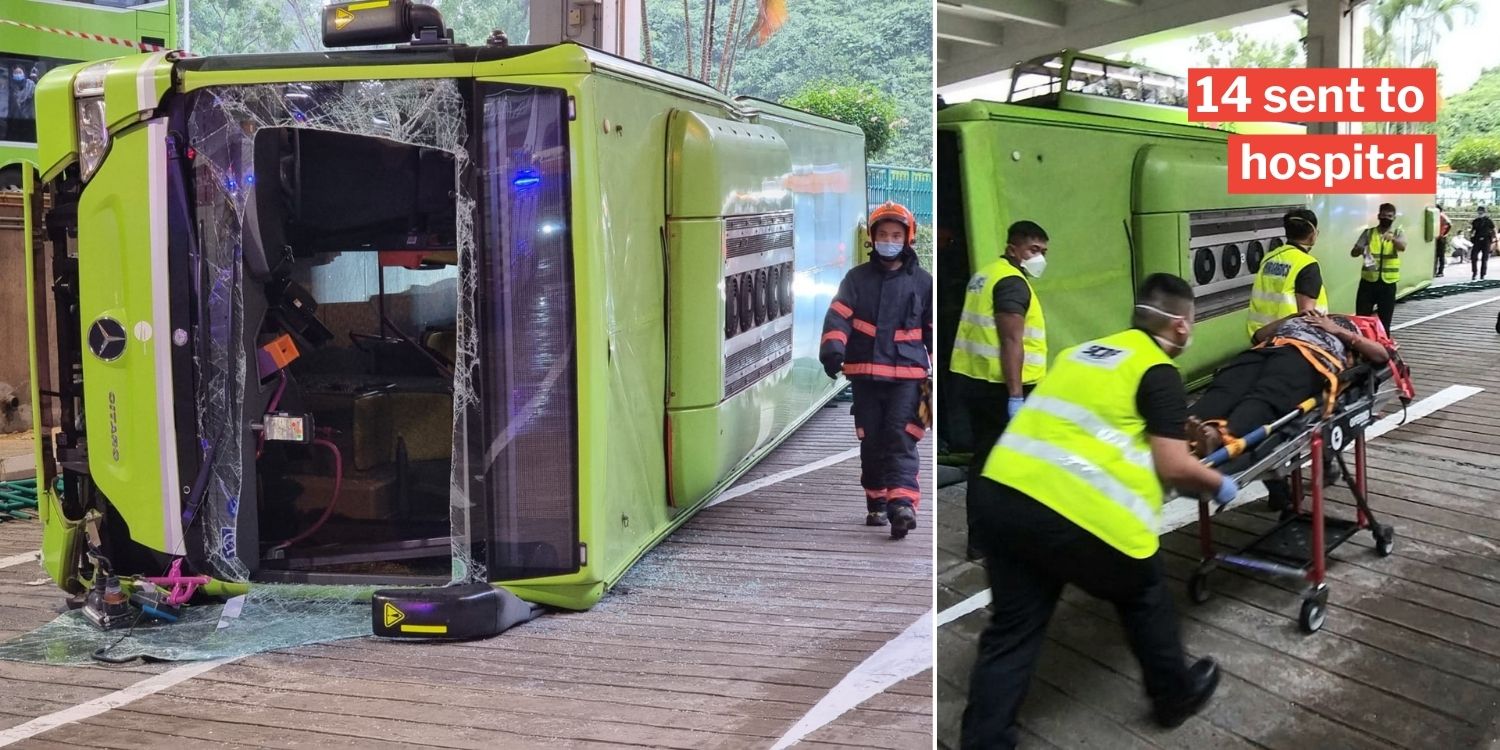 Of the 8 people in the bus, 2 had to be carried out on stretchers.

Singapore’s public transport is usually so smooth and comfortable that when we head to the bus interchange we expect an uneventful ride, apart from some squeeze.

However, that sadly wasn’t the story at Bukit Batok Bus Interchange on Sunday (11 Jul).

Some passengers would’ve gotten the shock of their lives when 2 buses collided, causing 1 of them to fall on its side and injuring 17 people. The Singapore Civil Defence Force (SCDF) also had to cut through the bus windscreen to rescue passengers.

In its initial Facebook post on Sunday (11 Jul) night, Tower Transit reported that 2 buses had collided earlier that day.

The location of the incident was Bukit Batok Bus Interchange, they said.

However, they didn’t elaborate on many more details, save that they’ve reached out to affected passengers and staff. 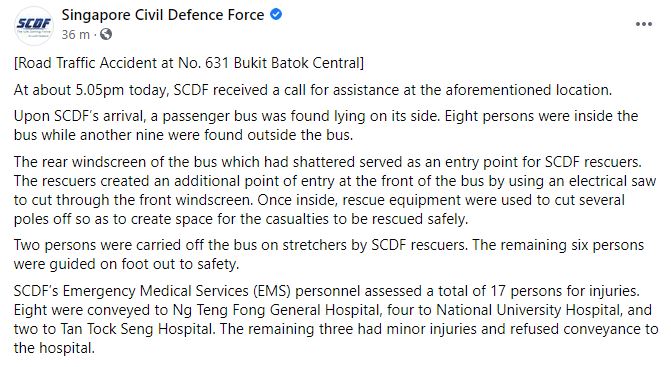 They found 1 passenger bus lying on its side, and 17 people in total involved in the accident. 9 of them were outside the bus, but 8 others were trapped inside the bus.

SCDF rescuers entered the bus through its rear windscreen, which had shattered.

They also had to cut open the front windscreen with an electric saw.

This is so that they could have an additional entry point. Once they were inside, officers also had to cut several poles in the bus.

That was so that there would be enough space to rescue the casualties.

Speaking of casualties, out of the 8 trapped in the bus, 2 had to be carried out in stretchers. The other 6 could leave on foot.

All 17 people were accessed for injuries, and unfortunately, 14 had to go to hospital.

3 others had just minor injuries, and they declined to be sent to hospital.

Bukit Batok MP Murali Pillai, in a Facebook post, said that 14 were injured – presumably he meant those who were sent to hospital.

As to the extent of the injuries, he said 5 of the 14 suffered “more serious injuries”.

Thankfully, none of the injuries suffered were life-threatening, he added. 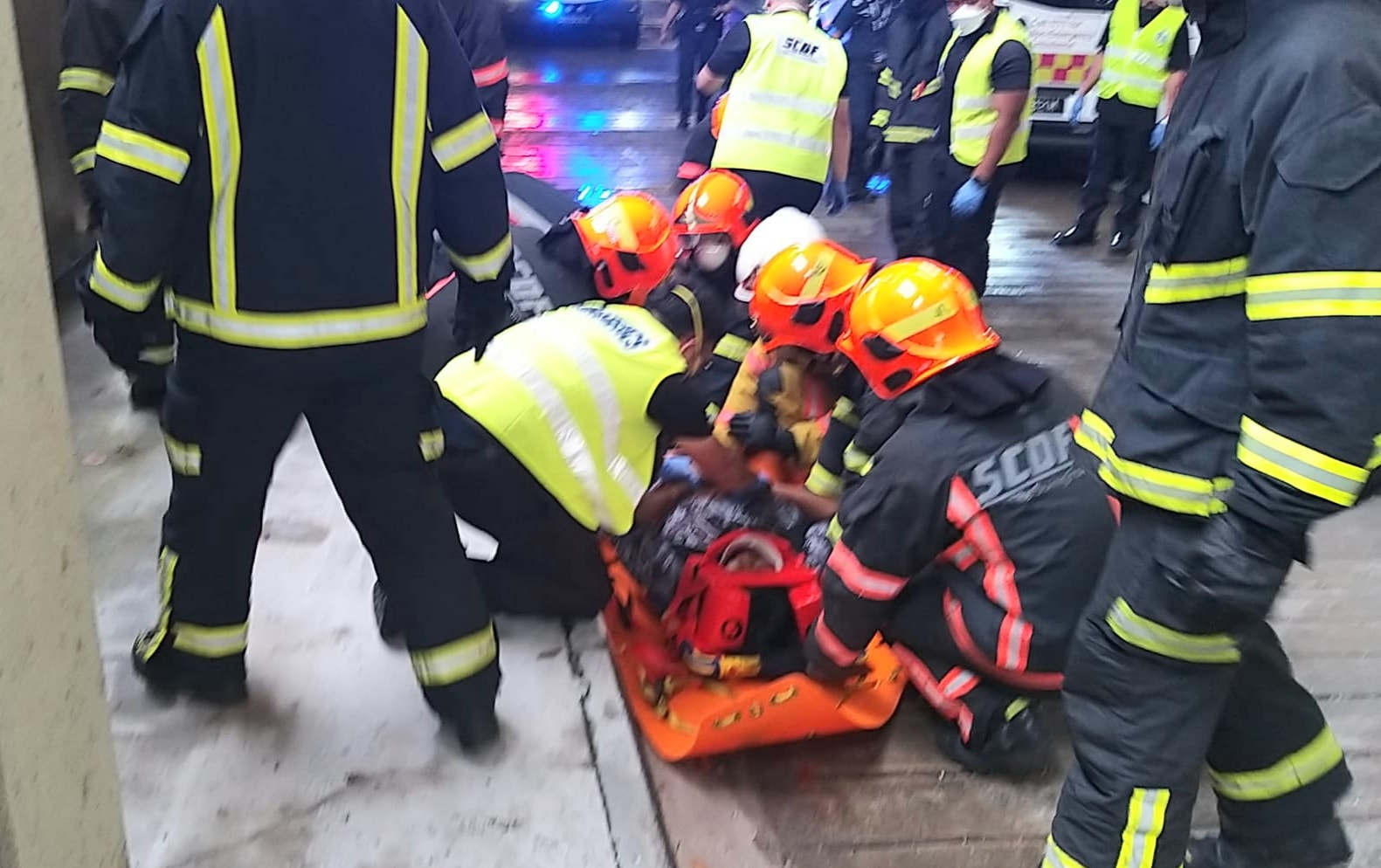 He urged Singaporeans to keep the injured in our prayers, while the authorities will investigate the accident.

Mr Murali also shed some light on how the accident happened.

One of the buses was pulling into the interchange, he said, while the other one was pulling out.

The impact of the collision caused 1 bus to mount the kerb, crash through the railing and  land on its side. In an update to its Facebook post, Tower Transit said only 1 of the buses was carrying passengers – the one that tumbled over. 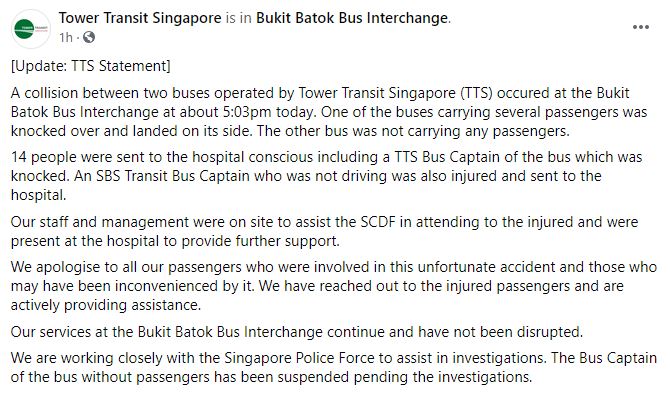 Unfortunately, the bus captain of the bus that was knocked over is one of the 14 people who were sent to hospital.

Another bus captain – working for SBS Transit – was also injured and sent to hospital.

Tower Transit also said the bus captain of the bus that wasn’t carrying passengers has been suspended. 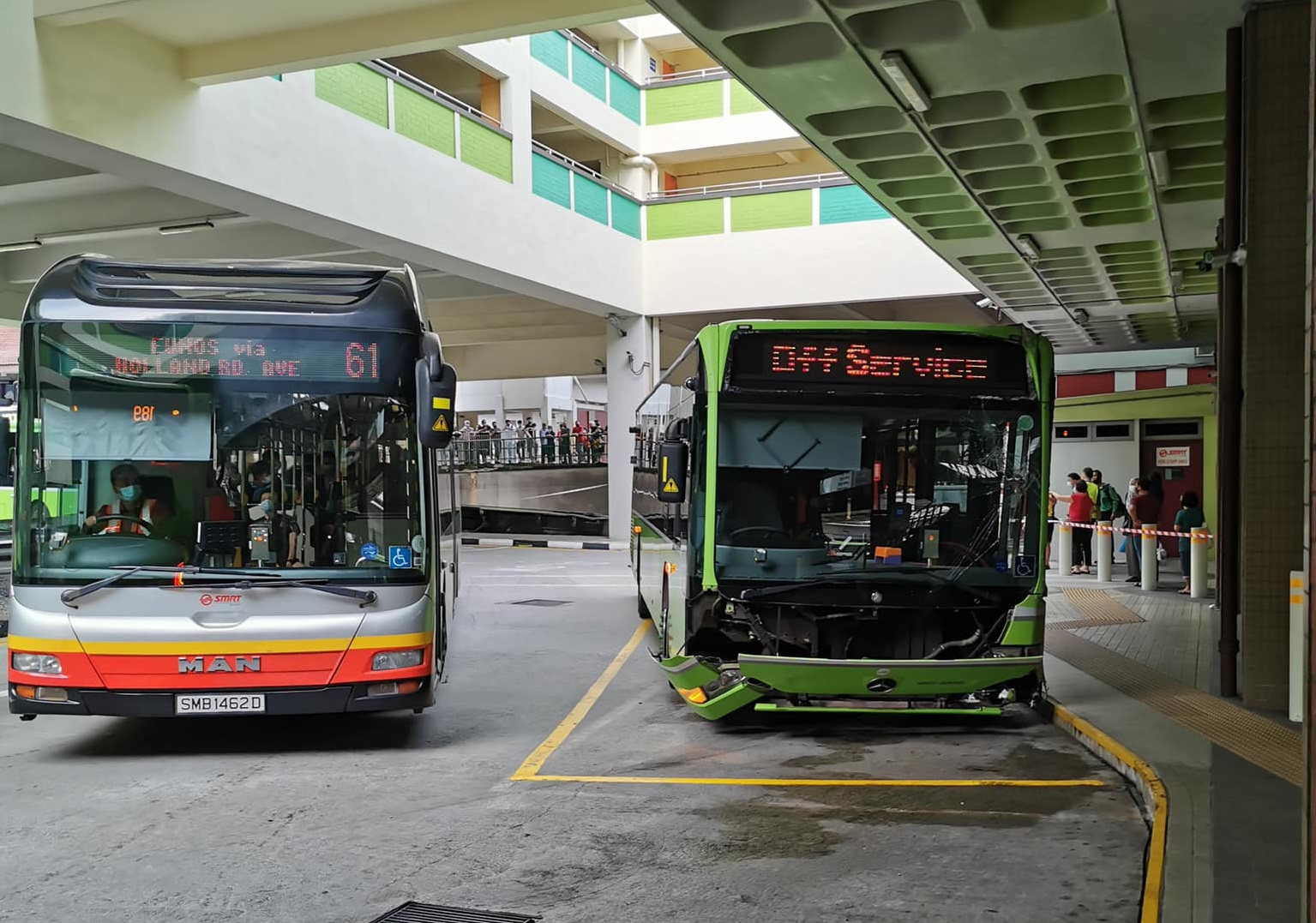 The other bus involved in the accident, which didn’t have passengers.
Source

His suspension is pending investigations that the company is assisting the Singapore Police Force (SPF) with.

The company also apologised to all passengers involved, as well as those who were inconvenienced.

They’re actively providing assistance to the injured, they added.

Hope investigation can be carried out swiftly

An accident like this is scary for any public transport user, as it could literally happen to any of us.

Hopefully, a thorough investigation will be carried out swiftly so we’ll have a clearer picture of what happened.

Kudos to the SCDF for rescuing the trapped people quickly. MS News wishes the injured a quick recovery.