Rusty The Dog Chained Outside House Since 2015; Sparks Petition To Return His Freedom 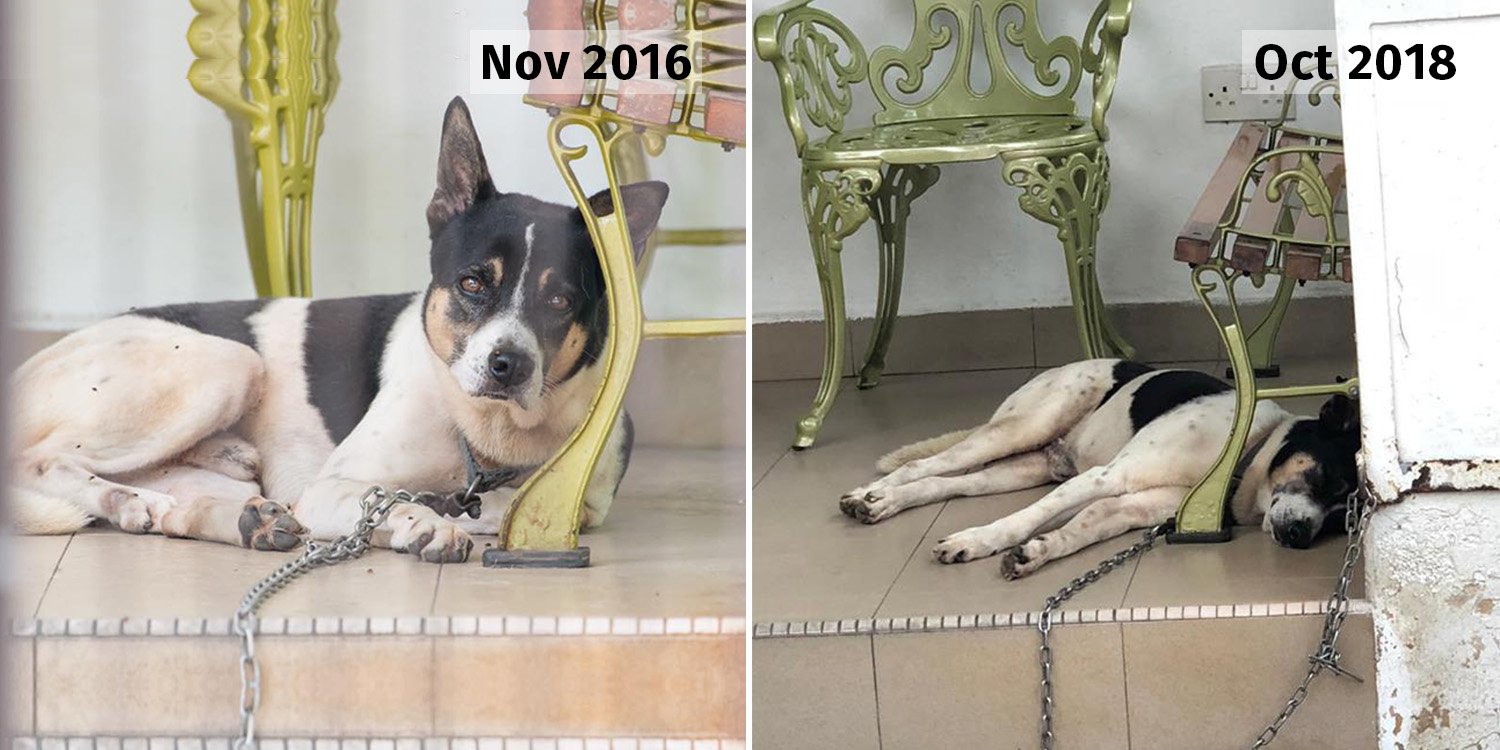 Dog Named Rusty Chained Outside House For At Least 3 Years

A disturbing picture posted on Saturday (27 Oct) has gone viral, and a furry friend’s quality of life could be at stake. 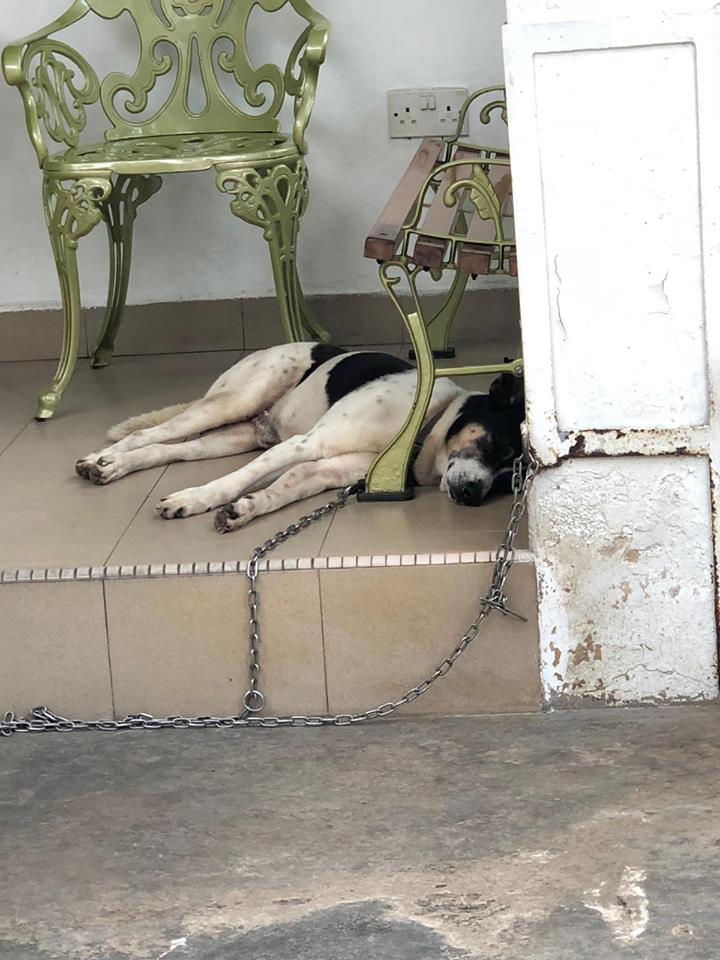 Ms Annie Tan posted this snapshot of a spotted black and white dog laying on the ground under a bench, chained to a wall.

According to her, Rusty the dog has been “chained for years” at a private residence which was unnamed to protect his elderly owner’s identity.

Thanks to internet sleuths, it was quickly uncovered that Rusty’s situation is not a new one. His case was even picked up by AsiaOne in May 2016. 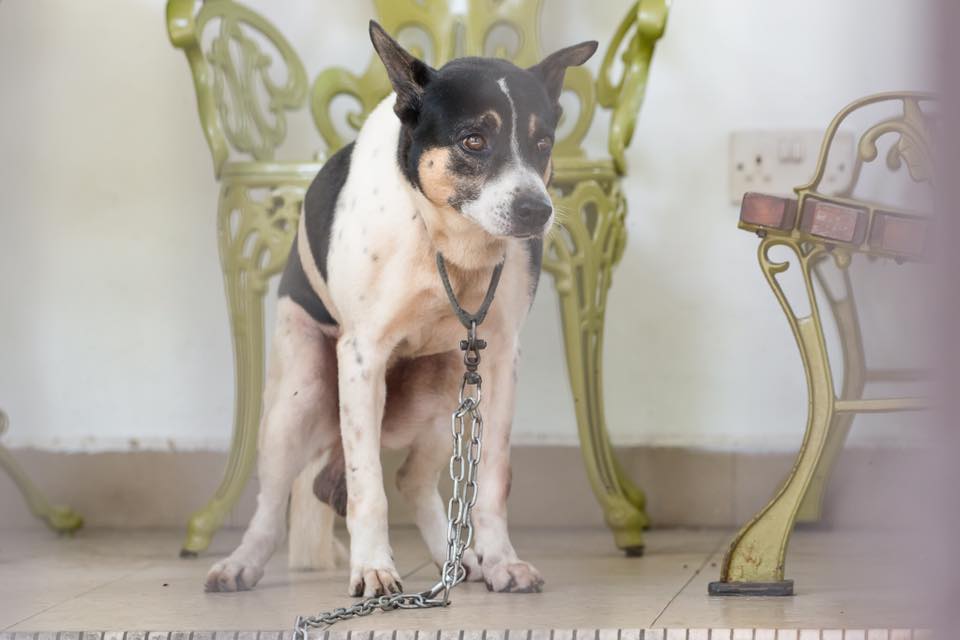 At that point, Rusty had allegedly been chained for close to 2 years. Which would make 2018, the third year he has endured his not-so-ideal living conditions.

Chained up for 3 years

Ms Tan claims that the original length of his chain was so short that Chained Dog Awareness in Singapore (CDAS) – a non-profit organisation – consulted with the Agri-Food and Veterinary Authority of Singapore (AVA) to barter for Rusty’s release. 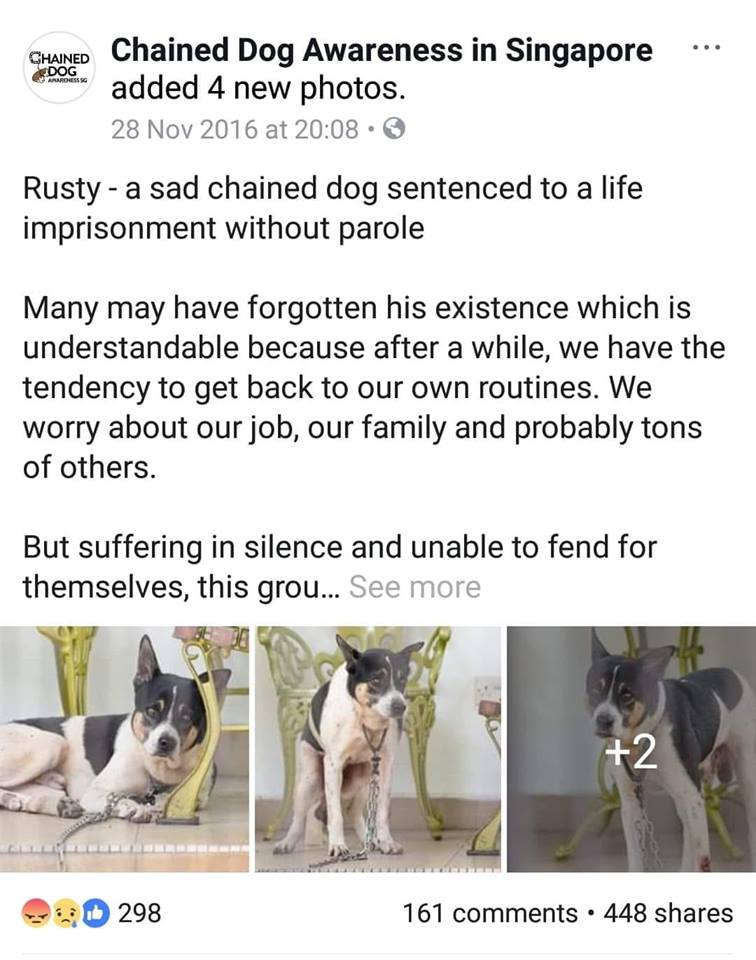 CDAS also spoke to Rusty’s owner’s neighbours back in 2016, and found that Rusty had been chained for “close to 2 years”, after he “walked into a house” nearby.

His owner has had previous dogs before — he allegedly tied one to the side of his “little bungalow”, while his other dog was housed at the same area Rusty is currently tethered to. 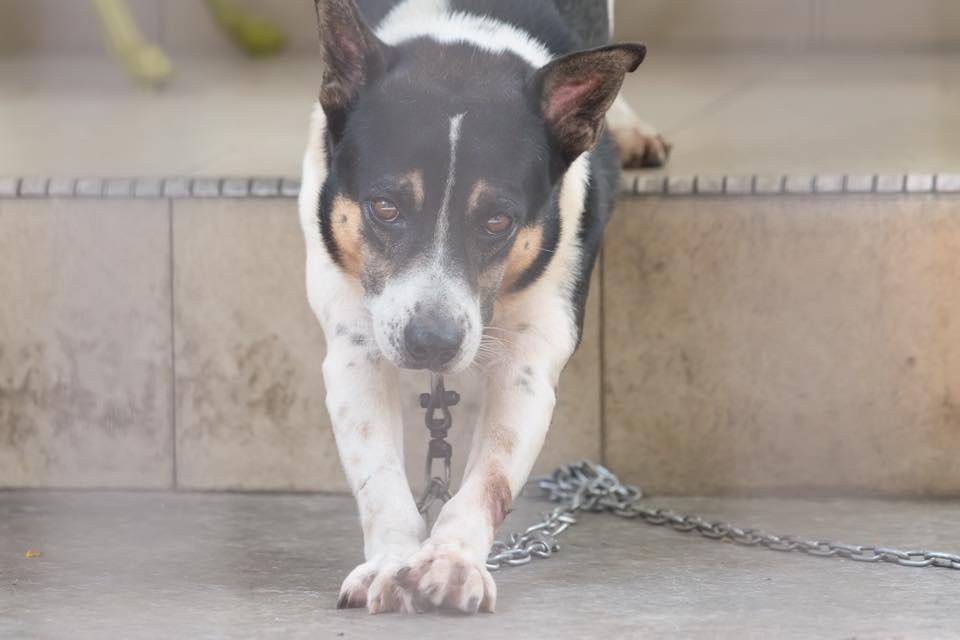 Rusty’s also allegedly being kept outside 24/7, and is constantly exposed to the sun and rain.

In May 2016, CDAS promptly informed AVA about the situation, as his metal chain measured about 1 metre — a length deemed too short to ensure the animal’s welfare.

AVA advised the owner to lengthen the mental chain, and closed the case. 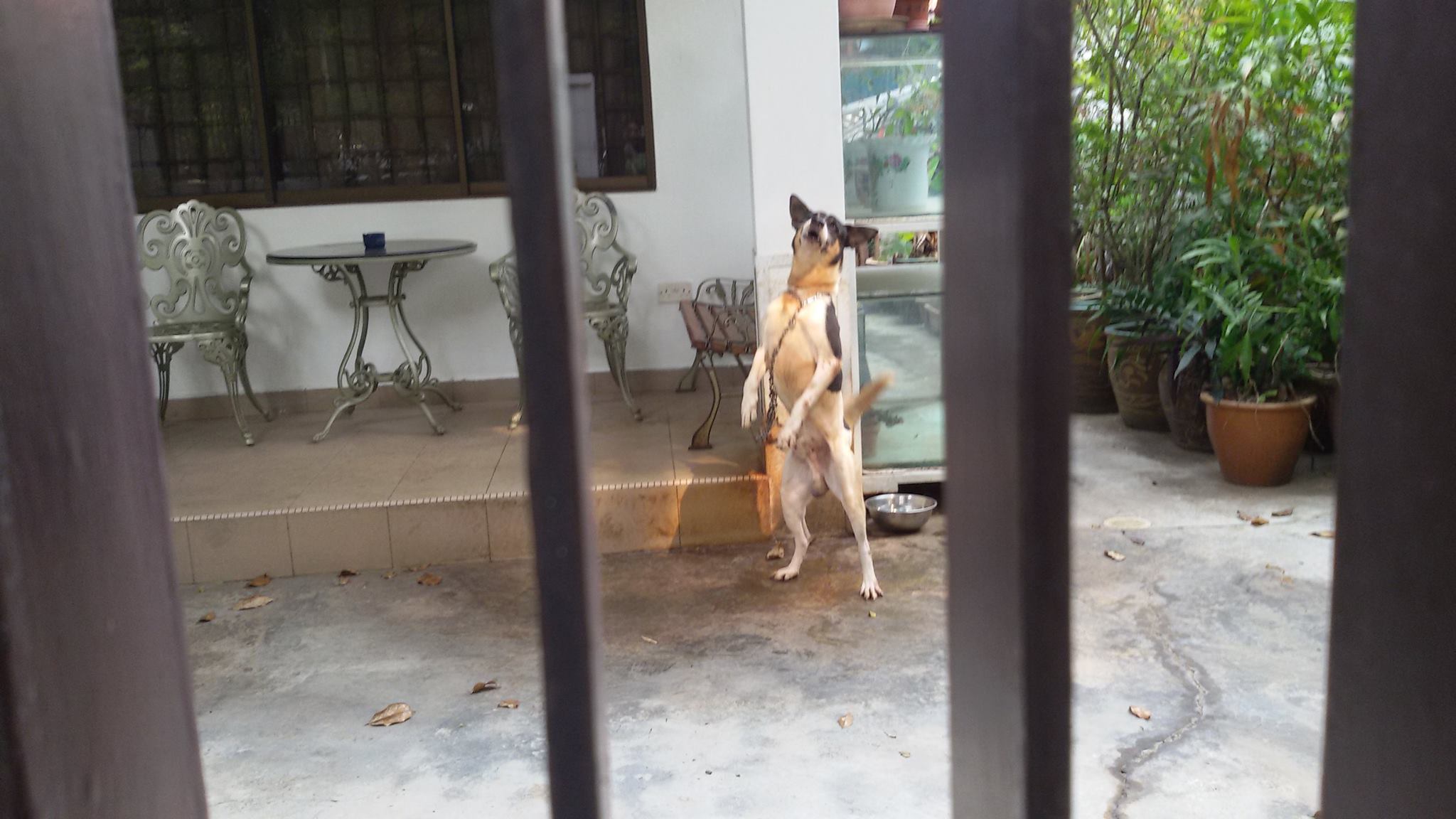 SPCA is also aware about the situation.

CDAS writes that Rusty’s owner had previously told SPCA that he would allow Rusty to roam freely at night, but quickly went back on his word and began “chaining Rusty 24/7 again”.

CDAS visited Rusty’s owner a total of 3 more times over the years to inquire if he could give up his dog.

Ms Tan also offered him $1,000 to buy the dog over, but the owner declined the offer. 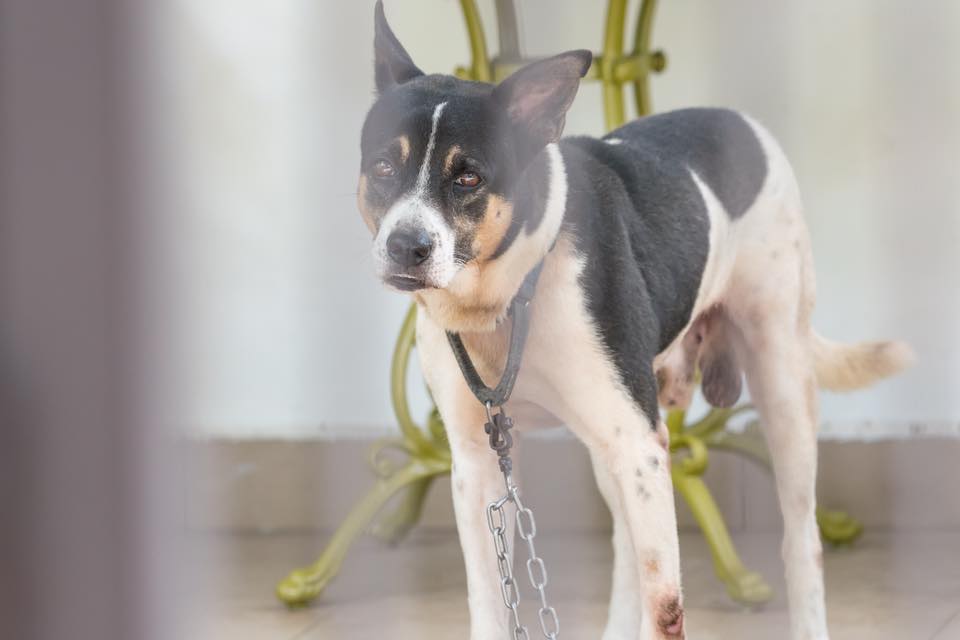 As Rusty is licensed under the unnamed owner’s name, there’s nothing much the authorities can do, since his chain has already been lengthened.

Ms Tan describes him as an elderly man who’s in his 60s.

Not illegal to chain dogs in Singapore

It’s not illegal to chain or cage dogs in Singapore, as long as the chain is of a length that is adheres to AVA guidelines.

Currently, a dog’s chain has to be double the length of the dog’s body, measured from the “tip of the nose to the base of the tail”.

Concerned netizens have offered solutions for Rusty’s predicament in the comments section.

Many requested for AVA to take action against the owner, before a tragedy occurs.

Others questioned why Rusty should be chained up if he hasn’t shown any signs of aggressiveness. A petition has been started here to call for immediate action to help #UnchainRusty. In under 2 days, it has already garnered close to 800 supporters at the time of writing.

Unlike us, Ms Tan writes that Rusty doesn’t really have much of a choice.

His activity is currently limited to the length of his chain, as he’s confined to the same spot every day. 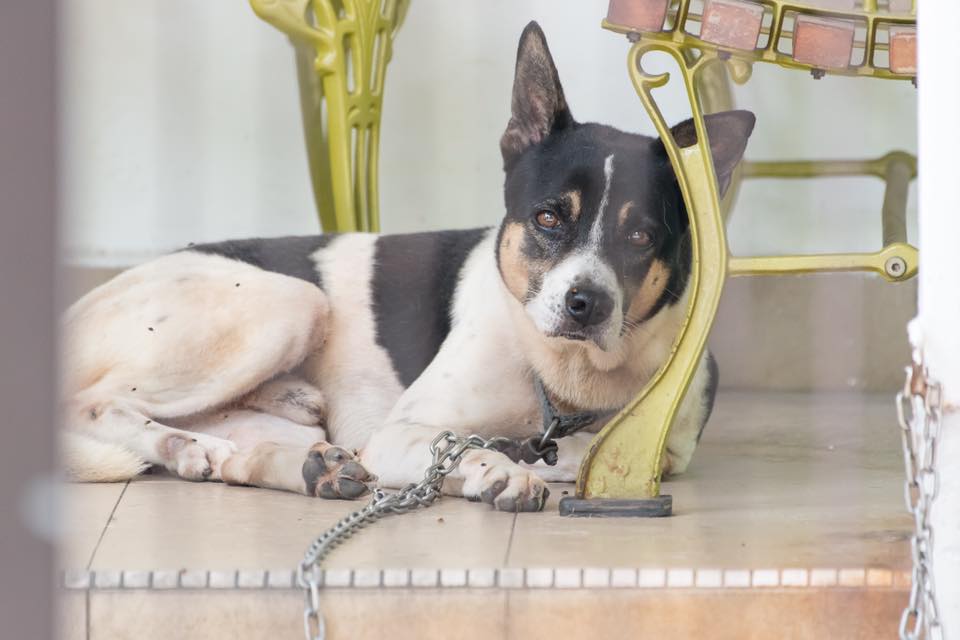 Although he doesn’t appear to be malnourished, we do agree that he deserves a better quality of life, if the allegations are true.

We sincerely hope something can be done to help Rusty soon.