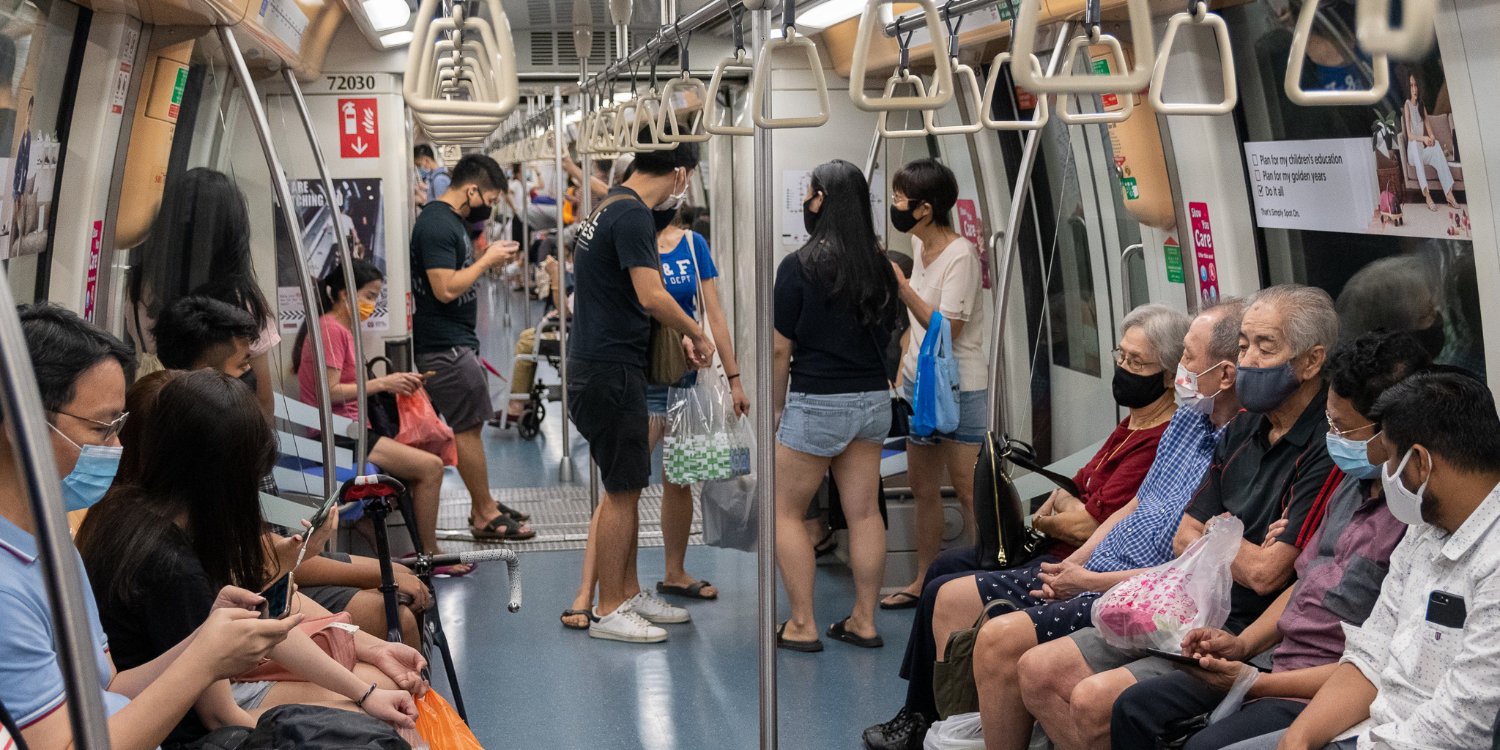 A simple act of kindness can at times be what we need to push on when the going gets tough.

Recently, a 23-year-old woman allegedly spotted a man crying on the MRT and decided to offer him a hug. Later, the man shared that her kind act made him reconsider taking his life. 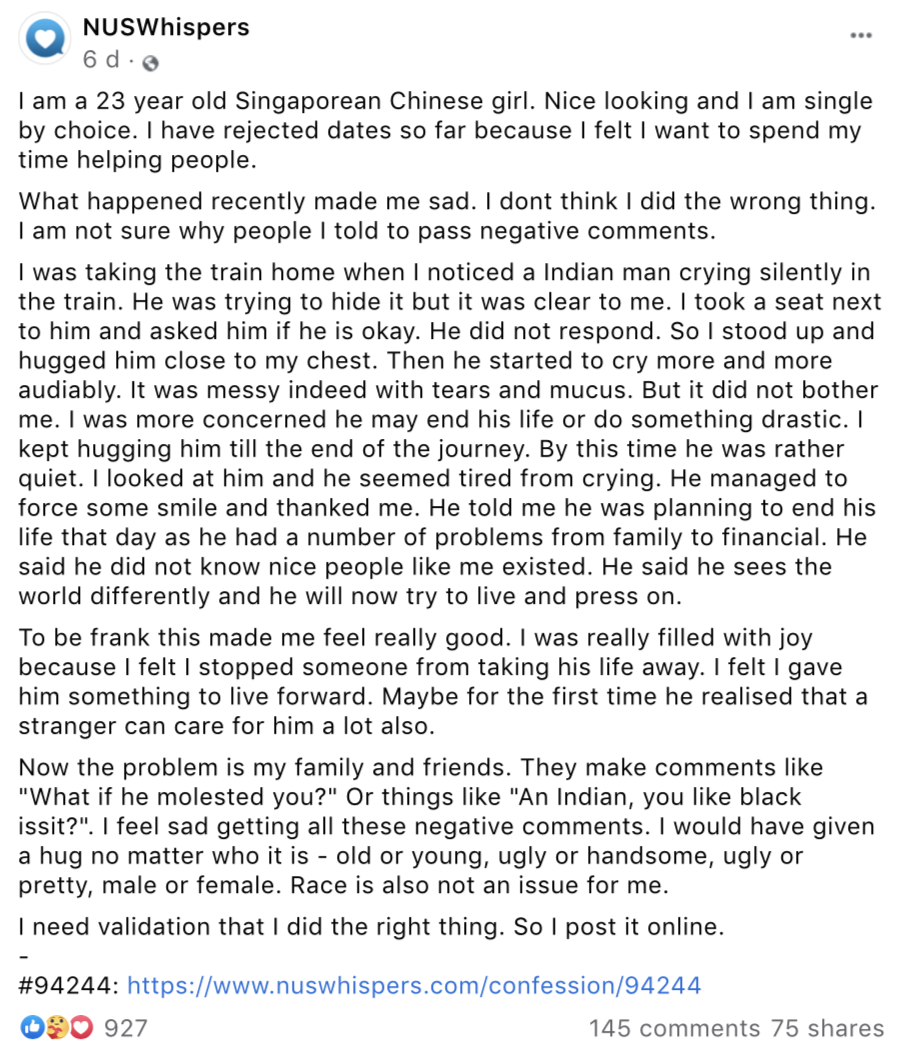 However, the lady’s family and friends seemingly disapproved of her actions and raised concerns when she shared the incident with them.

Comforted a crying man on the train

In a Facebook post dated 16 Jan on NUSWhispers, a 23-year old lady said she was taking the train home when she noticed a man crying silently on the MRT.

She sat down beside him and asked if he was okay, but got no response. This prompted her to stand and give him a hug. 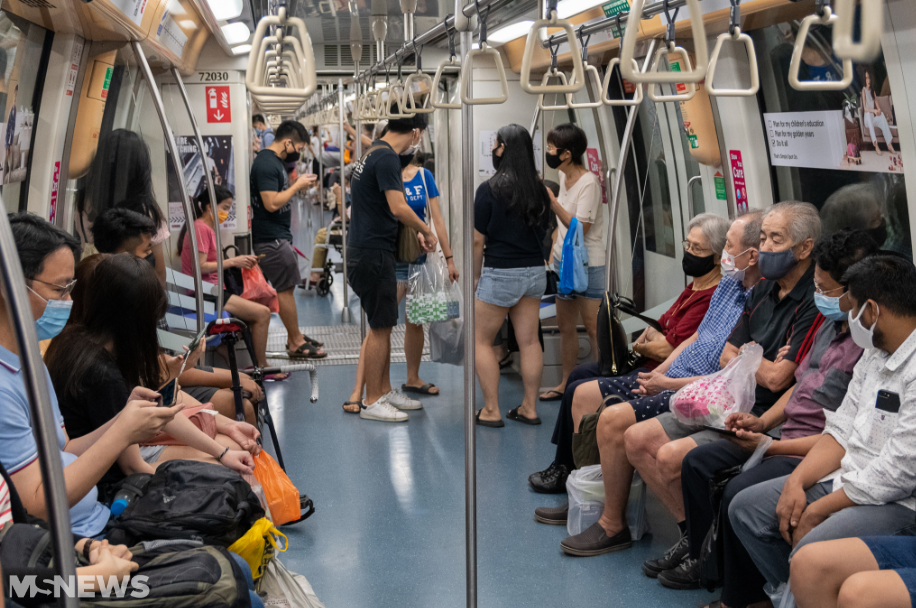 This act apparently made the man cry even more, but the lady said it didn’t bother her as she was more concerned that he might do something rash.

Man shared he was considering ending his life

For the rest of the journey, the lady allegedly continued hugging him.

Before alighting, the man forced a smile and thanked her, revealing that he was planning to end his life that day due to family and financial problems.

He added that he did not know there were people who were willing to be nice to him, and promised that he will try to live on.

Though the woman felt that she had made a positive difference to the man’s life, she shared that her friends and family disapproved of her actions.

They apparently made comments like, “What if he molested you?” and also made references to the man’s race.

The negative comments made her feel sad, as she would’ve apparently done the same no matter who it was.

Netizens advise her to take precautions

Quite a number of netizens have since shared their views on the incident.

A Facebook user felt that there’s nothing wrong with the woman’s actions as her intentions were pure. However, the netizen also advised her to take precautions to protect herself. 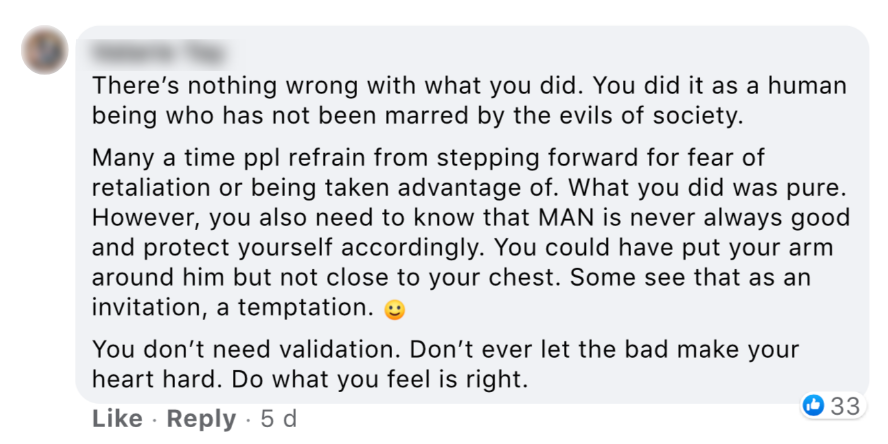 Another Facebook user shared that not many people are willing to step out of their comfort zones to do the same, but echoed the sentiments of the previous netizen.

Others were supportive of reaching out to someone who might be going through a tough time.

Step out of one’s comfort zone

The woman’s decision to comfort a person going through a hard time is admirable and shows how one can make a difference to a stranger’s life through very simple actions.

However, it is also true that one should take the necessary precautions to avoid a misunderstanding of intentions.

Nonetheless, kudos to her for taking the initiative to help someone who was visibly in distress.

What are your thoughts on this incident? Share it with us in the comments below.