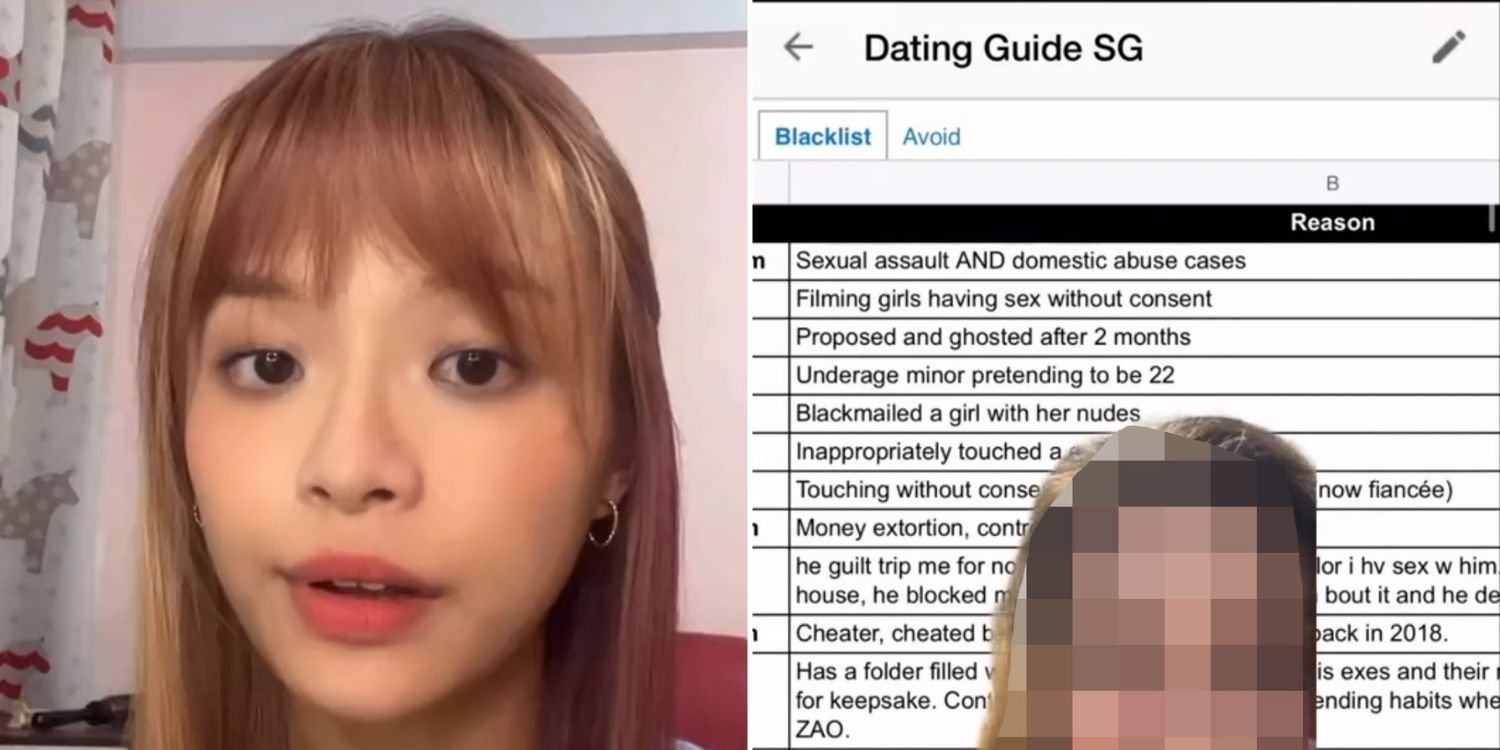 Everyone is a villain in another person's story.

Dating, while fun, can turn into an intimidating prospect after a while due to bad experiences. Therefore, having experiences from multiple dates can help give one an idea of what you like about the opposite sex.

However, for every good experience, there are also bad ones to remember. That was perhaps why a Singaporean woman decided to create a Telegram group chat where women can collectively share their experiences with men in a safe space. 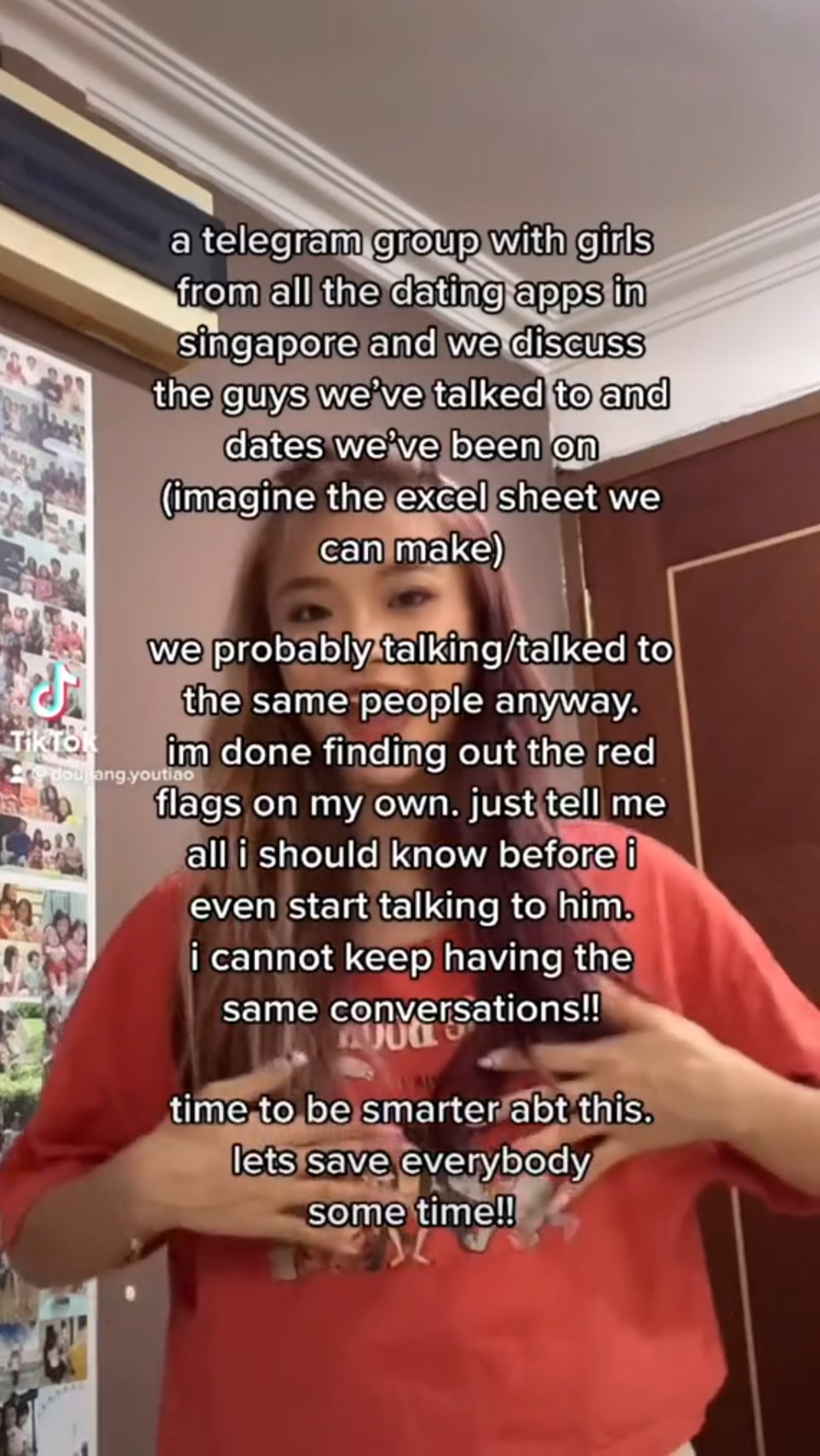 But what started as an innocent sharing group meant to protect women from potentially dangerous men devolved into a name-and-shame group in which one of the users published an Excel sheet of names.

The resulting public backlash was so rampant that the Excel sheet has been deleted.

On 17 Oct, TikTok user @boonkikikiki, real name Koh Boon Ki, uploaded a video explaining the idea of creating a Telegram group chat of girls to share their dating experiences with men in Singapore.

She also proposed the idea of creating a spreadsheet for ladies to reference later on.

Ms Koh explained that girls in Singapore probably would’ve met the same group of men. So, having a list would help save women time in finding out about their potential dates.

She also explained that finding out the red flags before even beginning on a date would be a smarter way of going around it.

After Ms Koh uploaded the video, she created the Telegram group chat.

She explained in a follow-up video that she personally verified all the users in the chat before joining the group chat so as to create a safe space. However, she admitted that she had not thought of setting clear boundaries to moderate the discussions in the chat.

She also admitted not noticing how the group chat was slowly turning into a name and shame group.

After the formation of the group chat, users in it decided to create a spreadsheet of names, allegedly without the knowledge of Ms Koh.

This spreadsheet, titled “Dating Guide SG”, had 2 tabs, one titled “Blacklist” and another titled “Avoid”. 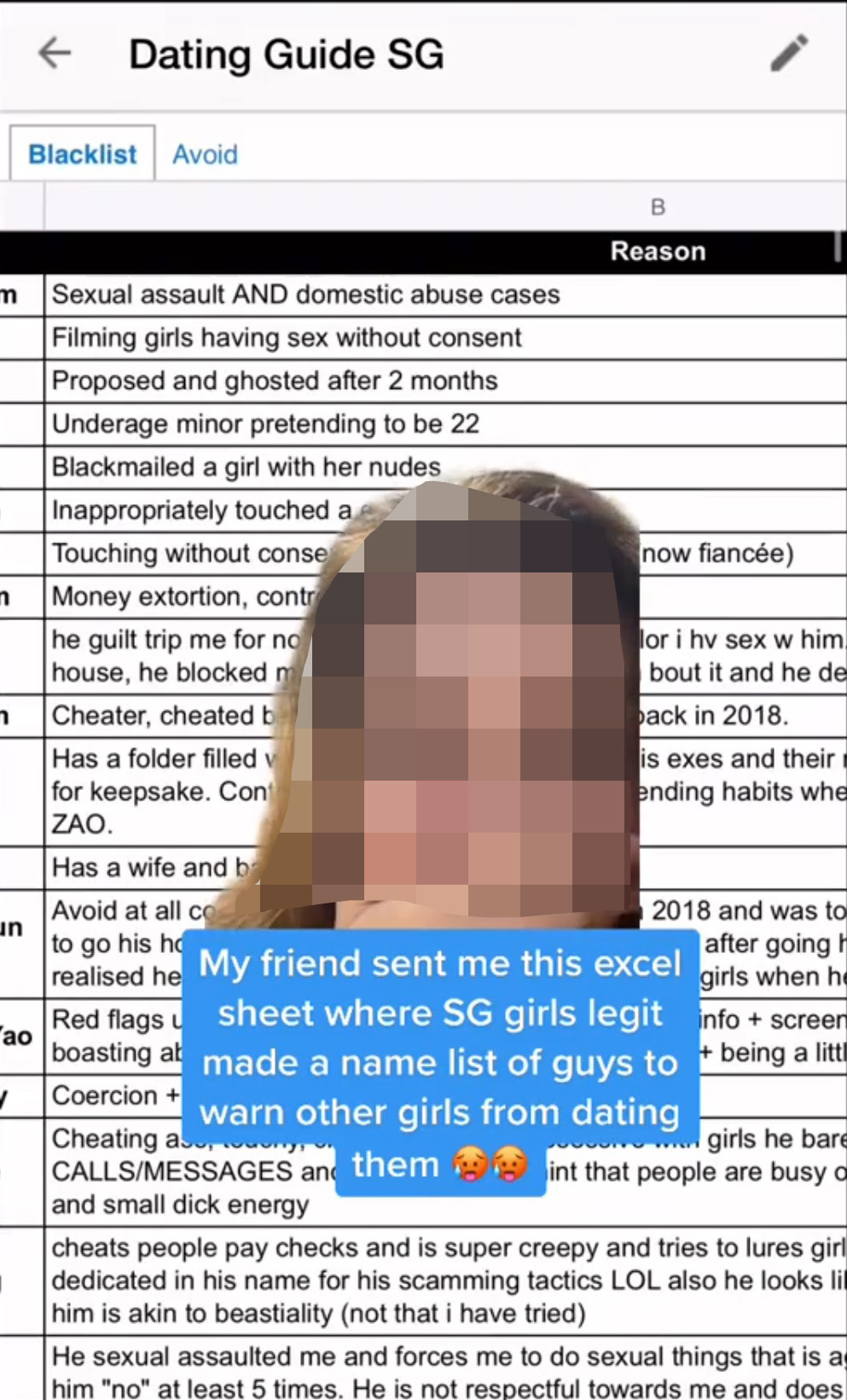 Both tabs included the names of various men and in many cases, their social media accounts. Tied to each name is a reason for their inclusion in the list.

These reasons ranged from allegations of sexual assault to unsavoury character traits.

Ms Koh claimed that she has no access to the spreadsheet and has since asked the document’s creator to delete it. The spreadsheet has been inaccessible since Monday (18 Oct).

While she regrets how her idea spiralled into something else entirely, Ms Koh stands firm that a group chat for the ladies could be helpful.

TikTok user may be liable to prosecution under Poha

Lawyer Joshua Tong of Kalco Law told The Straits Times (ST) that Ms Koh may be liable to criminal prosecution under the Protection from Harassment Act (Poha).

Although the contributors may also face the same fate, the authorities’ first port of call would likely be the group’s creator, he said.

Under Poha, those who publish the personal information of another to cause harassment, alarm or distress, may be jailed for up to six months and fined up to $5,000.

While we are sure that Ms Koh had good intentions, the execution and lack of moderation ended up being the group’s downfall.

The idea is definitely divisive as many feel that posting allegations about men online without them having the chance to defend themselves is unfair.

On the other hand, Singapore is a small place and some girls may feel the need to warn about men who have engaged in questionable behaviour and may do the same to others.

That attempt at solidarity is something that can be appreciated.

Creating an unmoderated group chat with naming and shaming is not the way, however, and can open one up for prosecution.

If any person, regardless of gender, has been a victim of sexual assault or other forms of abuse, do seek help from the authorities.

What do you think of the idea of having a checklist of people in the dating scene and would it work with the right boundaries? Let us know in the comment section below.