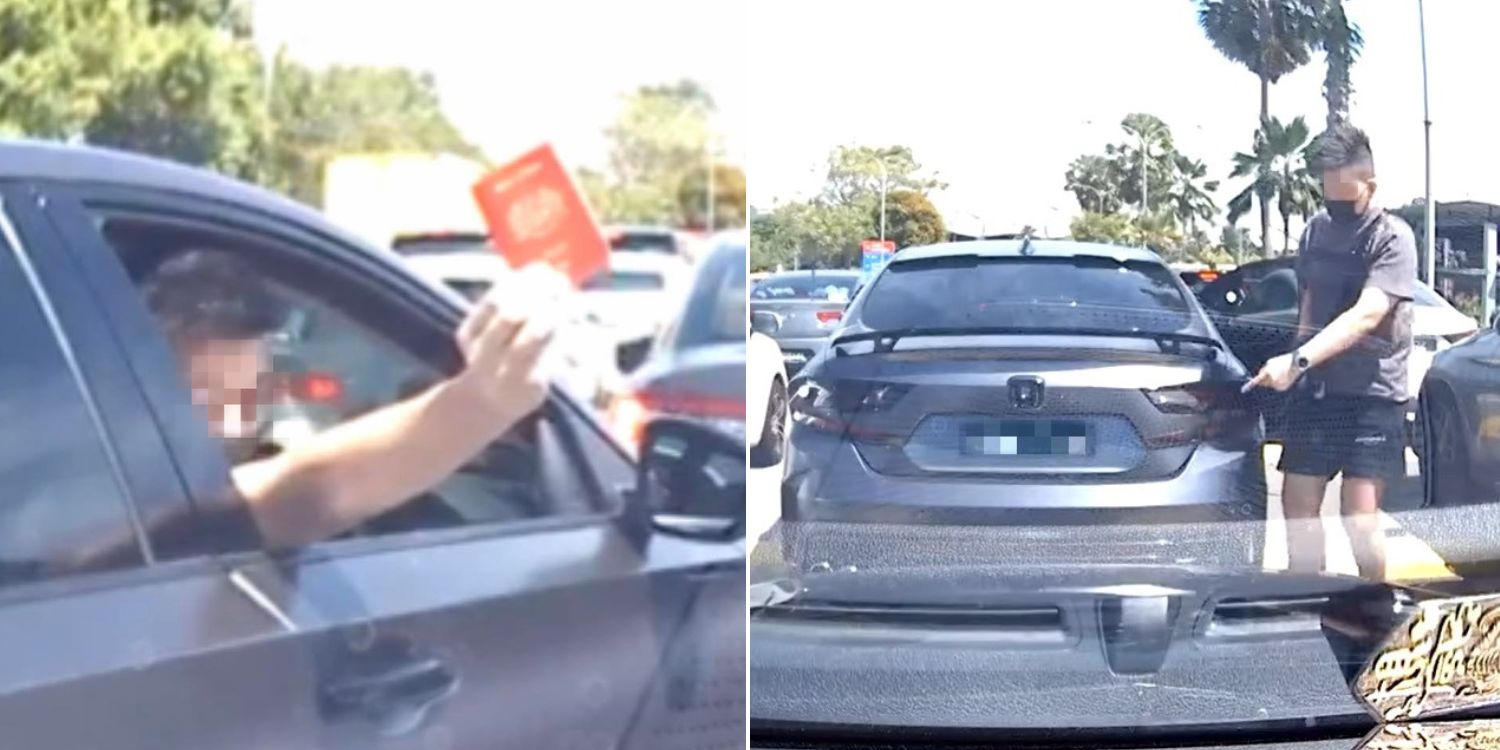 He later points to his own Malaysian-registered licence plate.

Now that it’s the weekend before National Day, cross-border traffic is getting heavy again as folks in Singapore head over to Malaysia for a quick getaway.

We all know what that might lead to: Another unpleasant incident involving stressed-out drivers stuck in traffic.

This time, a man was recorded flashing a Malaysian passport at the Tuas Second Link while trying to cut in front of another car. 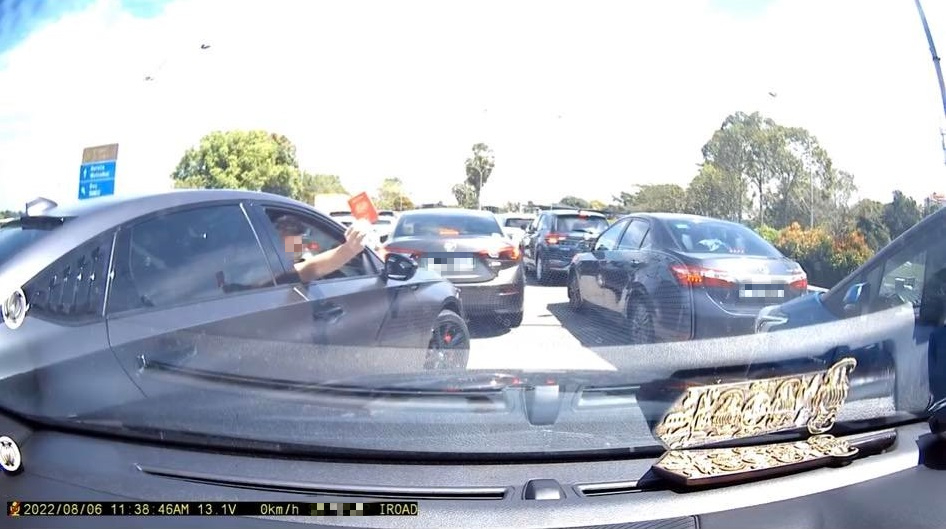 We’re not sure what he was hoping to gain, besides the disdain of netizens in both countries.

The incident was captured by in-car camera videos posted on Facebook by a Ms Joanna Loh from Malaysia, who was in the camcar behind.

Recognising that a traffic jam near National Day is inevitable, she said in her post that she and her sister left for the Tuas Second Link at 7am, getting through customs at 8am.

After leaving Tuas, the jam started, she said, trapping them on the road for four hours.

That’s when they encountered the male driver involved in the incident.

According to the timestamp, the first video was taken on Saturday (6 Aug) at 11.38am, and shows cars packed in bumper-to-bumper traffic on the Second Link.

Then, a black Honda, whose driver’s arm is dangling out the window, tries to cut in front of the camcar.

However, the camcar also moves forward at the same time, seemingly refusing to let the Honda cut queue. 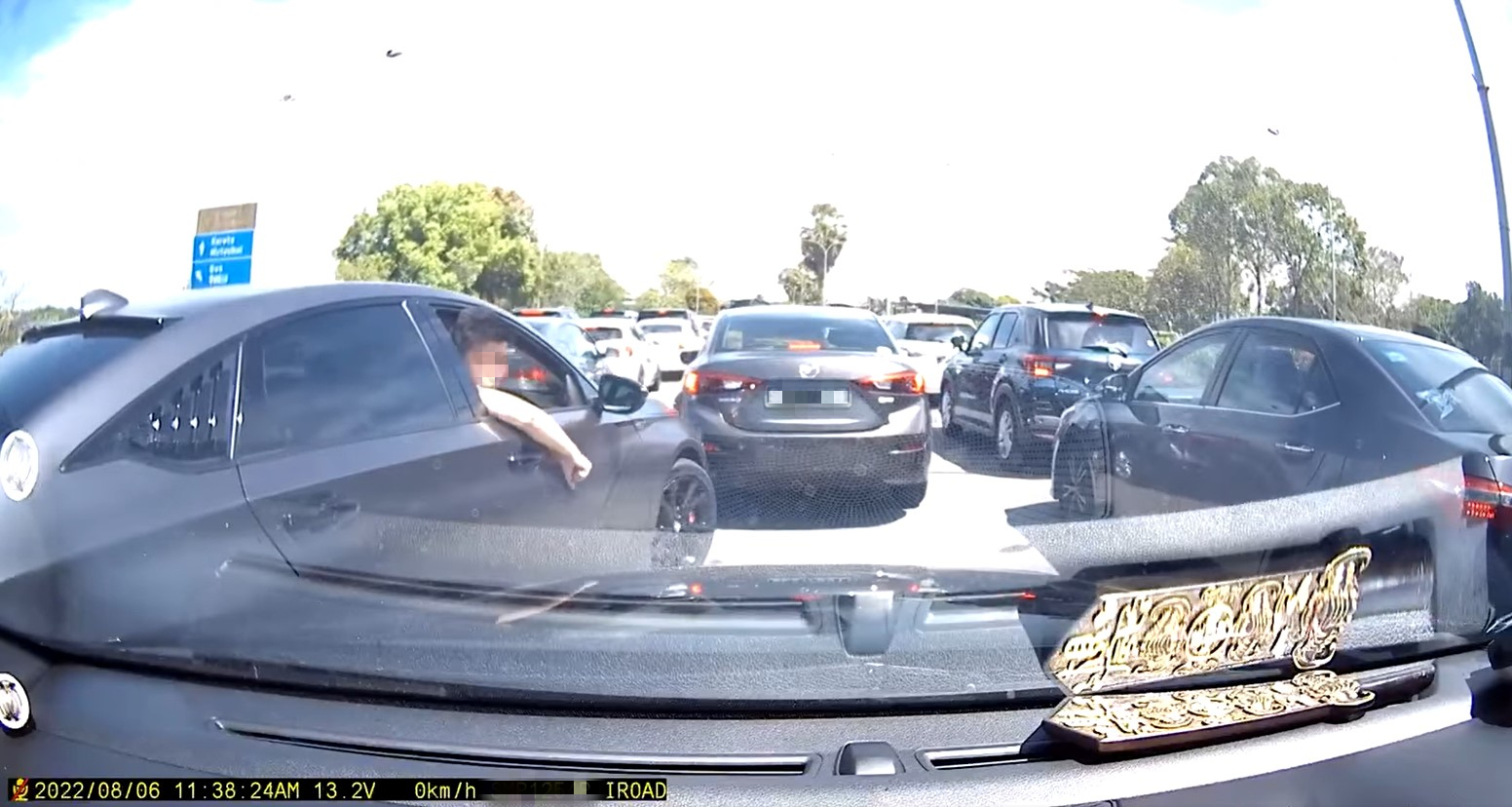 Ms Loh said the Honda driver was in the wrong since he didn’t signal before trying to cut in.

She added that they would’ve let him go if he’d been polite enough to signal.

After briefly retreating to his car to put his mask on, the Honda driver reopens his window to gesture aggressively with his arm, seemingly asking, “What’s your problem?” 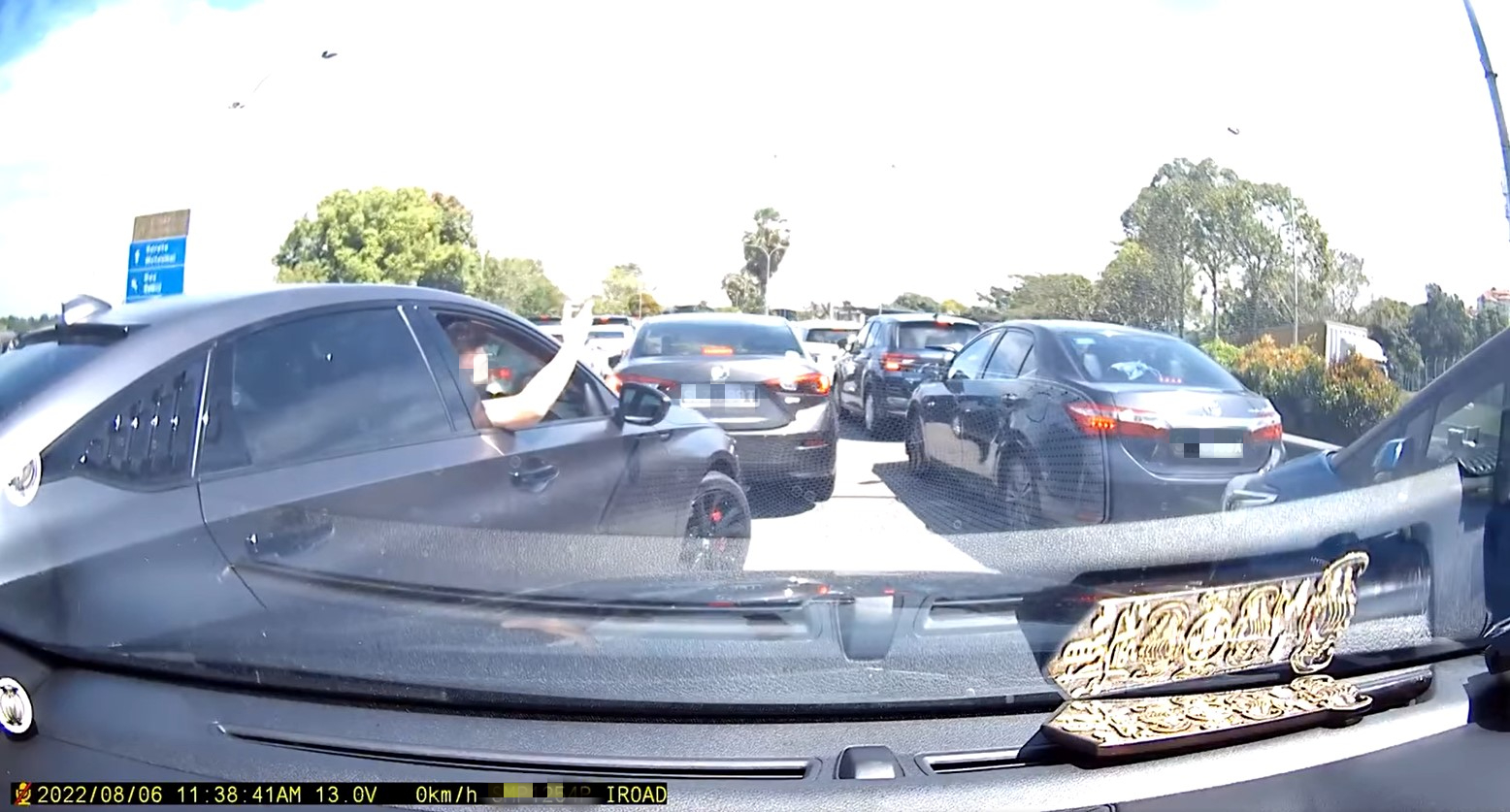 He then does something perplexing: He reaches into his car and takes out what appears to be a passport, showing it to the camcar. While the video is blurry, Ms Loh identified it as a Malaysian passport, though some netizens thought it was a Singapore passport.

Though the red colour of the passport might lead some to mistake it for the Singapore passport, Malaysia’s passport is also red (albeit a darker shade). It has only the word “Malaysia” on the cover, whereas Singapore’s passport has “Republic Of Singapore”. 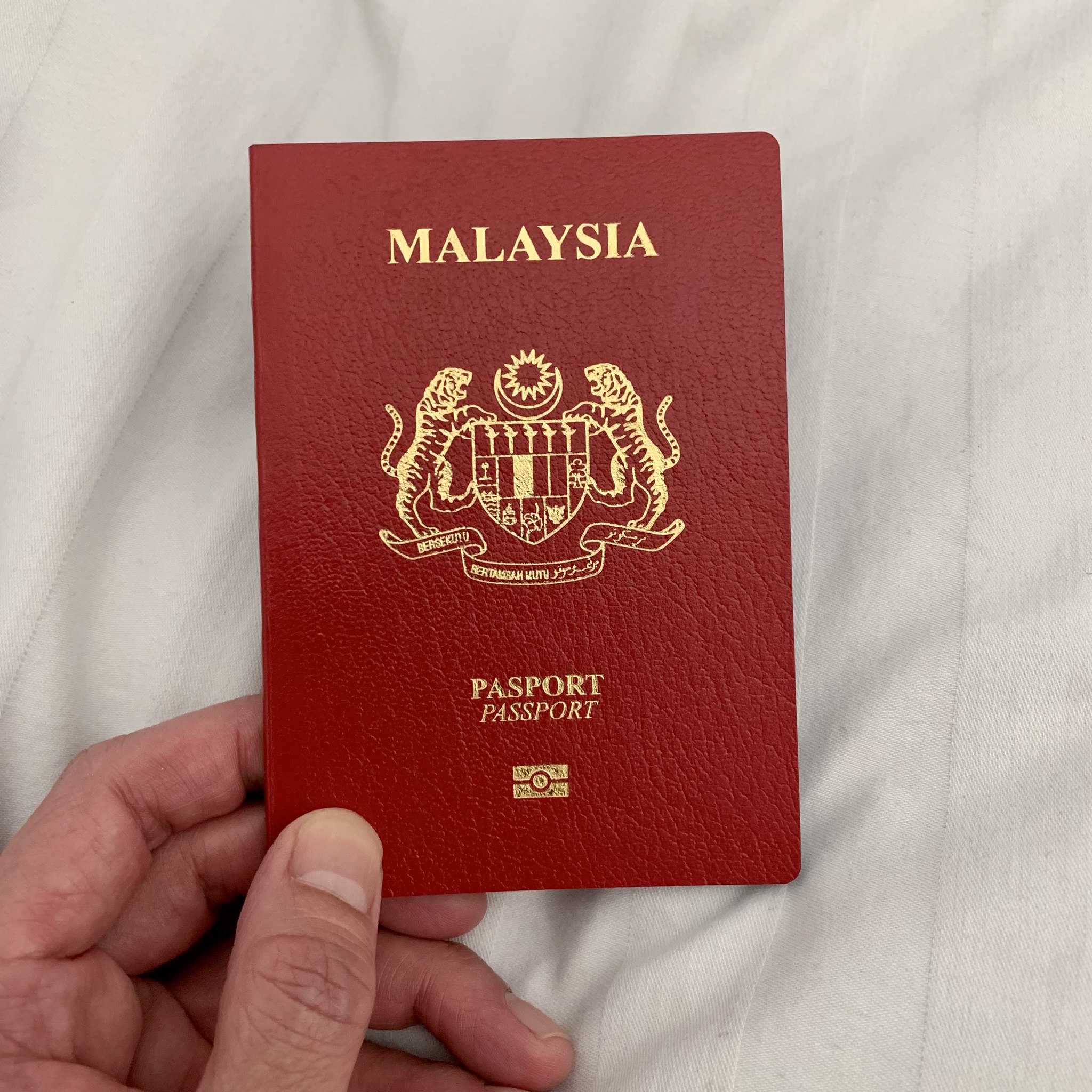 After flashing the passport, the Honda driver pointed to the ground, as if saying, “I’m moving in”, and proceeded to squeeze in front of the camcar.

It’s uncertain what the Honda driver hoped to achieve by flashing the passport.

Ms Loh speculated that he did this as he saw they were driving a Singapore-registered car.

Although she and her sister are also Malaysians, she said it doesn’t mean they can be bullied even if they were Singaporeans.

Besides, she added that it doesn’t mean he has priority over the road because he has a Malaysian passport, either.

She also believed that his bullying behaviour was linked to the fact that there were two women in the car.

The incident wasn’t over yet though — in the second video, with timestamp 11.44am, the Honda has already successfully cut in front.

However, instead of just being satisfied with his “victory”, the Honda driver has decided to take things further.

He gets out of his car and points at his licence plate, registered to the state of Johor. 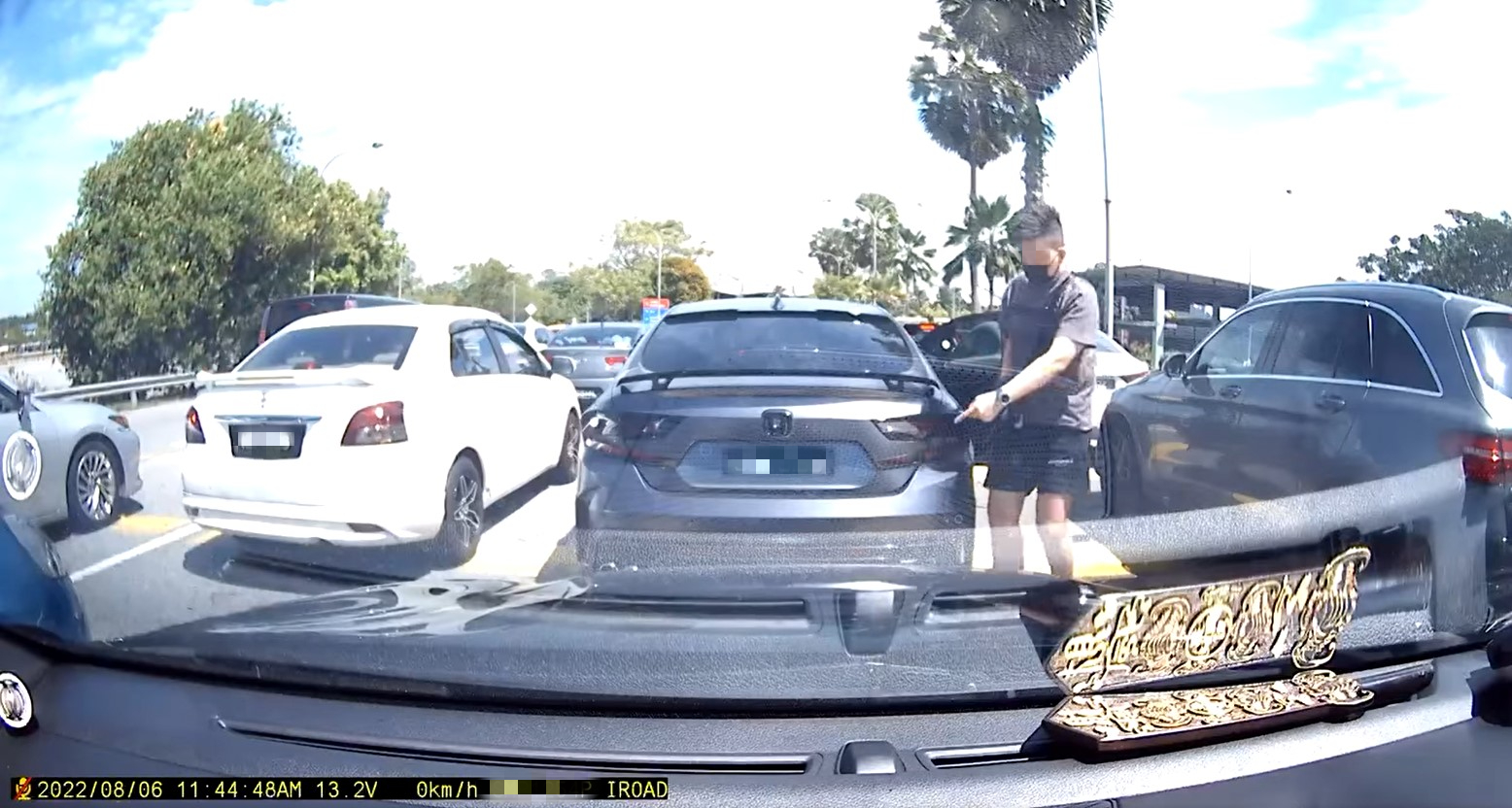 He then points at the camcar, then at his phone, and gives a “thumbs-up” sign. Finally, he goes back into his car, ending the incident.

What did he mean by that? Perhaps after comparing passports and licence plates, he wanted to compare phones, too?

Your guess is as good as ours.

We’re in it together

Since we haven’t heard from the Honda driver, it’s unwise to assign blame for this strange incident.

But as traffic piles up at our land border checkpoints, there are bound to be more unpleasant incidents between tensed-up drivers.

Hopefully, whether Singaporean or Malaysian, drivers will remember that we’re all in it together when it comes to congestion.

Ultimately, a little bit of patience and consideration always helps.