Must Share News – Independent News For Singaporeans
Home Viral Facebook Girlfriend Gets Desserts As Gift, Rants To Partner For Giving Her Something... 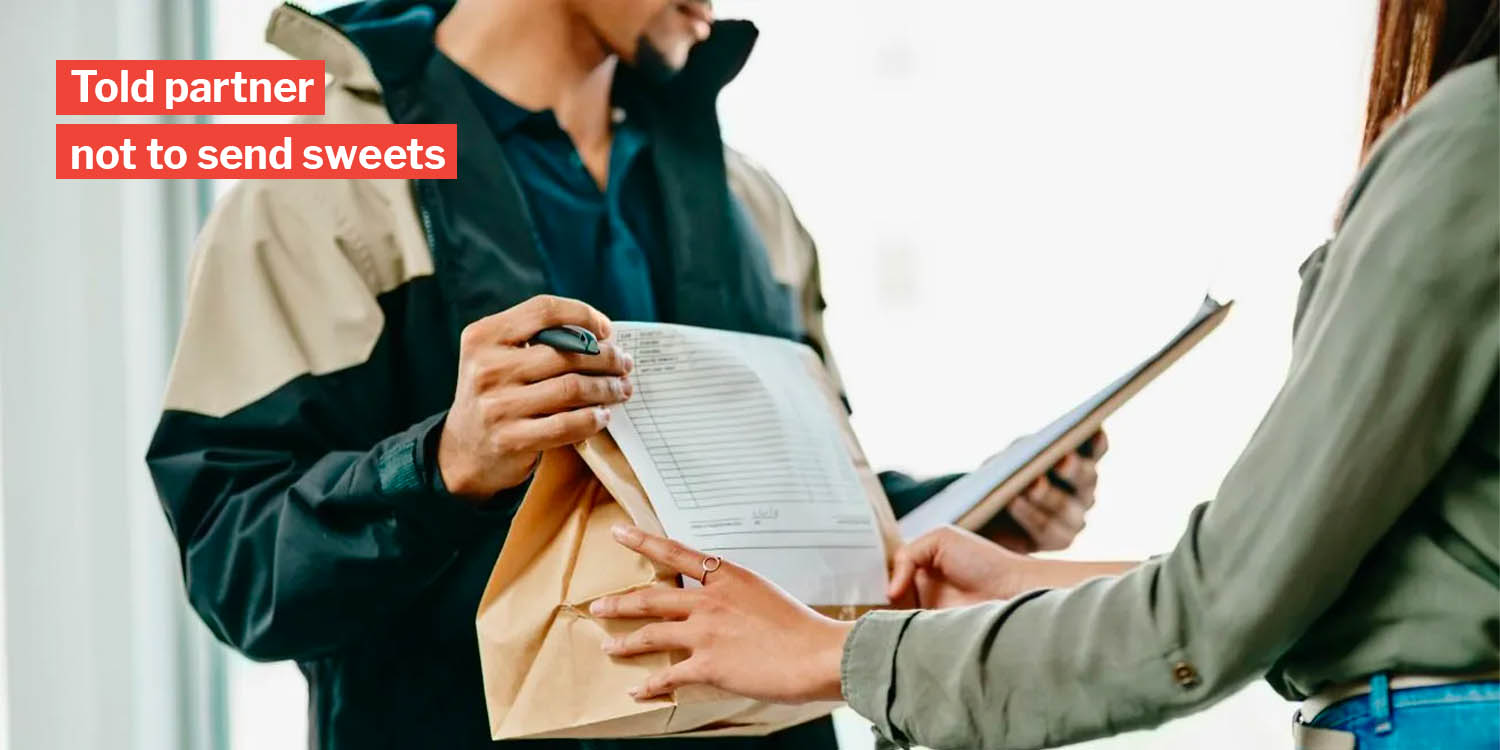 Girlfriend Rants Over Desserts Delivered To Home, Claims She Was Avoiding Sugar

Lots of us are missing our friends and family during the ‘Circuit Breaker’, but being physically apart from our significant others is especially difficult for many.

Despite being apart from one another, couples have found unique ways to keep their relationship going strong, like delivering sweet treats to each other and getting delivery guys to serenade their partners.

One lady, however, ranted on social media after receiving cake and yoghurt from her other half.

Here’s how it went down, according to screenshots uploaded on the All Singapore Stuff Facebook page. 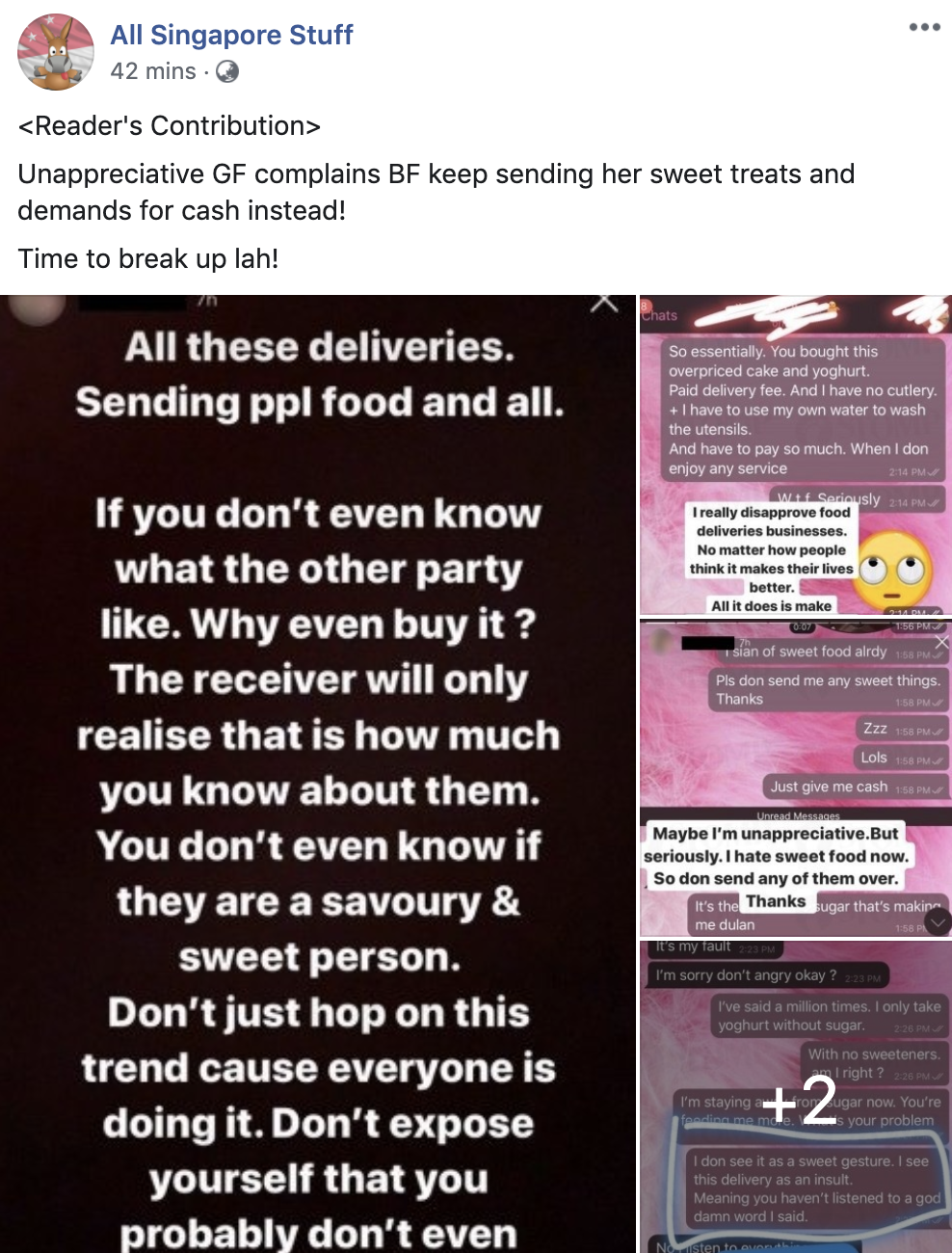 Girlfriend received desserts from partner, claims it was an “insult”

According to the messages, the recipient apparently messaged her partner, telling them that she was tired of sweets. She added that it might have been the sugar content in the food that was making her angry. 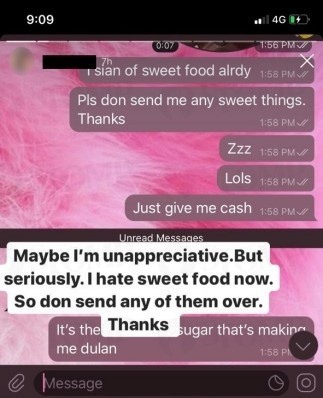 Just over 15 minutes later, she texted her significant other about the “overpriced cake and yoghurt” they had sent over.

Apparently, the recipient did not want to have desserts in the first place and found it inconvenient to wash the utensils. 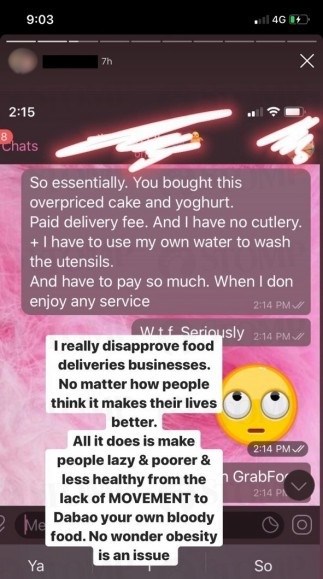 Her partner explained that they wanted to treat her to “a nice tea break”, but she retorted that she saw the gesture as an “insult” instead.

She explained that she was avoiding sugar, drawing an apology from her partner as they pleaded with her not to be upset. 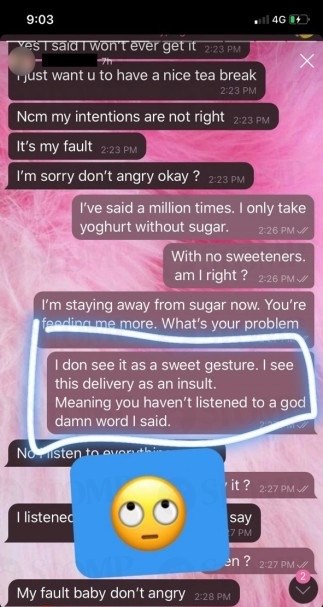 If the pictures were anything go by, it seems like her apologetic partner even sent her $50 to make up for the unwanted desserts. Girlfriend urges others not to “hop on trends”

In another Instagram Story post, she urged others not to jump on the bandwagon of sending one’s significant other food, especially if you’re not aware of their preferences.

According to her, doing so under these circumstances will only make one realise how little their partner know about them. 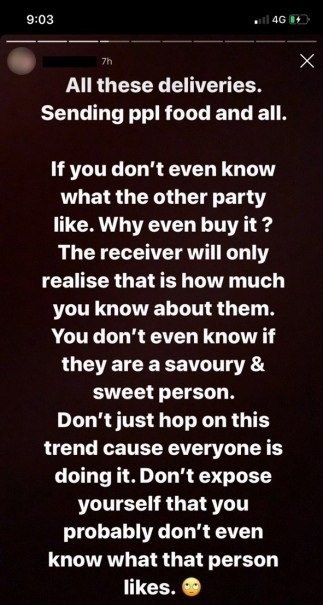 Hope they settled this amicably

Regardless of what happened, we hope that the couple settled the incident amicably and are on good terms again.

That said, do you agree with her argument? Share your thoughts on the matter in the comments below.