Step Aside, Olsen Twins — The Woos Are In Town

They may look almost identical, but have vastly different personalities. While Hayley is more feminine and demure, Jayley has an edgier, devil-may-care attitude.

Jayley broke into the entertainment scene before Hayley, and her popularity soared. Nonetheless, Hayley soon caught up and starred in movie Filial Party, Channel 8 sitcom 118, Channel 5 thriller Zero Calling, and even made her idol drama debut in Malaysia.

Such is the power of 2, as the siblings have proven through their success.

Here are 10 facts about the siblings that you need to know:

1. They already had a significant online following before joining showbiz

Prior to entering showbiz, the twins were already popular bloggers.

They started blogging in 2005 and had similar domain names, Hayley’s at hayleywoojiayi and Jayley’s at jayleywoojiaqi.

They also did covers on YouTube, dubbing themselves as Jay on the Hay, modelled after YouTube sensation Rin on the Rox.

As Jay on the Hay/Rin on the Rox put it, whether you like it, love it, hate it, whatever — just enjoy it.

2. They started blogging due to their small social circle

It’s hard to believe that the bubbly twins starting blogging because they didn’t have many friends, and needed an outlet to express their feelings.

In secondary school, Jayley was the class vice-chairman and also the teacher’s pet. She had to report her classmates who played truant, and naturally didn’t have many friends. That was when Jayley decided that if no one wanted to talk to her, she would talk to herself on her blog.

Hayley was indirectly affected since she was in the same class as Jayley, and adopted the same method as Jayley.

3. They were from ITE

The sisters were from Tanglin Secondary and later went to ITE Clementi.

For some, ITE might mean It’s The End, but this was not the case for Jayley.

At a sharing session at ITE College East, Jayley said:

I cried and was very, very sad when I got my O-level results. I saw my classmates going to polytechnics and junior colleges, and I had to go to ITE even though I was from the Express stream. Back then, I really felt that ITE was the end.

But after studying Business Administration at the institute, Jayley felt that ITE has helped change her life around, and perceived it as “a beginning” instead. She felt that her course was useful and allowed her to apply what she learnt to real life situations. Jayley also made new friends and became more sociable.

The twins then pursued a Mass Communications diploma at MDIS.

Now, they’re up-and-coming celebrities – who says your choice of school determines your life?

Hayley and Jayley participated in The New Paper New Face competition in 2011.

During the judging process, the judges also saw the differences between the twins.

The judges then asked the both of us, ‘Are you willing to chop your hair off?’ My answer was, ‘Sure, why not’. But Hayley said, ‘But how short will the hair be?’ I think the judges from then on saw a difference in us.

It was originally Hayley’s idea to participate in the competition, but she didn’t want to do it alone and asked her twin to accompany her. However, Hayley did not make it past round 2. The next year, Hayley went for The New Paper New Face’s closed-doors audition again, but unfortunately did not make it to the top 25. 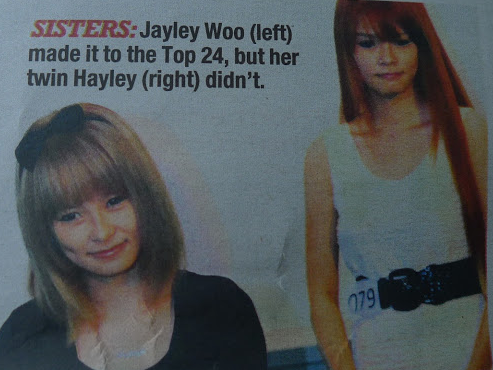 On the other hand, Jayley made it to the top 20, and gained more prominence after the competition as she was invited to lend her face for television commercials, print advertisements and runway shows. Jayley even made her television debut in Channel U TV series Jump!.

The sisters sport different styles — Hayley’s one is more feminine while Jayley’s style is edgier.

But there’s one thing both sisters agree on — comfort is key.

Fanboys who are hoping to catch a glimpse of the sisters in bikinis might have to be disappointed for the duo would not wear one.

I have to develop my abs before I can show it!

Maybe Channel 8 producers should consider casting the twins in a sequel of Beach.Ball.Babes so audiences can have a visual feast ( ͡° ͜ʖ ͡°)

Jayley wants to star in idol dramas and play a girl who is surrounded by handsome guys, much like the female leads in Meteor Garden and Hana Kimi. This might be partly why Jayley is jealous of her twin, who had the chance to act in a Malaysian idol drama, Dive Into Love. 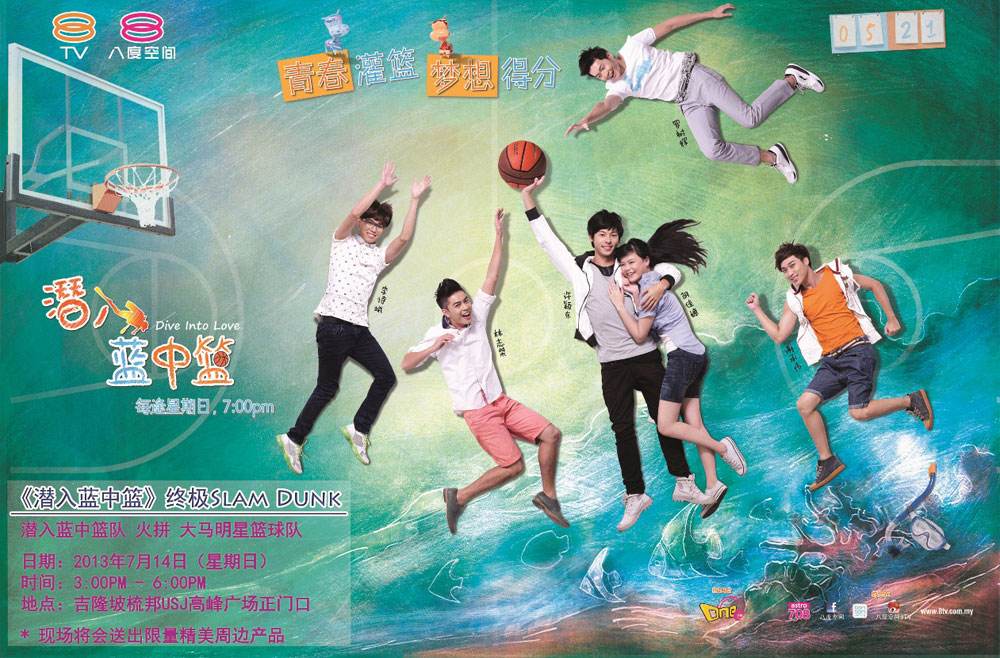 For Hayley, she would like to portray a princess, like South Korean actress Kim Tae Hee’s role in romantic comedy My Princess.

For the Woo sisters, their first ever ambition was not to be an actress.

While Hayley’s childhood ambition was to be a singer, Jayley wanted to be a professional figure skater.

Watch as the duo shared more about themselves:

8. They bth wanted to be air stewardesses

Seems like being an air stewardess is every girl’s dream – up-and-coming starlet Carrie Wong once had that dream, and so did the twins.

In 2011, Jayley applied to Singapore Airlines, but only managed to make it to round 2.

In 2012, Hayley auditioned for several K-pop competitions such as the JYP & Alpha K-pop in order to fulfill her dreams of being a K-pop star.

In an interview with AsiaOne, Hayley said:

If I still haven’t succeeded by the end of the year, I may consider becoming an air stewardess.

In 2012, Jayley’s romance — and subsequent break up three months later — with MediaCorp actor Edwin Goh was highly publicised in the media.

In an interview with AsiaOne in 2013, Jayley said:

I won’t be as open about these things as before. I had just got into entertainment at the time and I didn’t realise that people would be so interested in this type of thing. I mean, I’m just a normal human being.

Jayley is now single for more than a year since her last relationship with someone outside the industry, which lasted for three years.

Hayley, on the other hand, is open about her relationship with ex-MediaCorp actor Kang Chengxi. 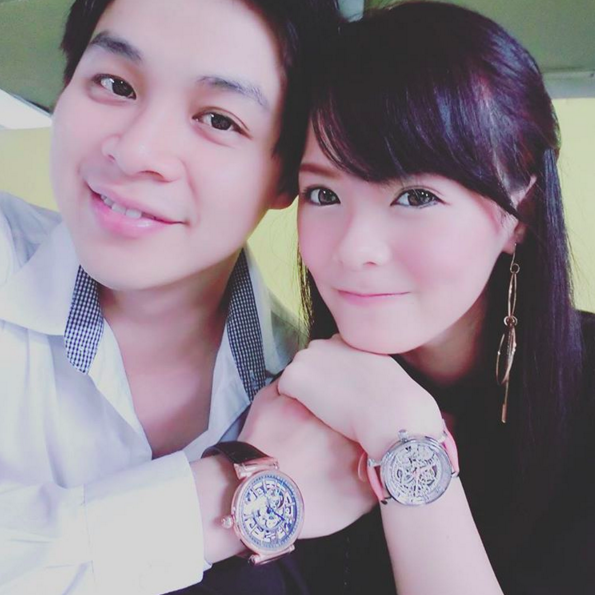 I don’t feel like I should lie about our relationship, since we’ve been dating for so long. Who knows? Maybe he’s the one. Either way, I know I’ll be careful about the way I talk or behave as well, because I know there are many people out there who look to me and Jayley as role models. 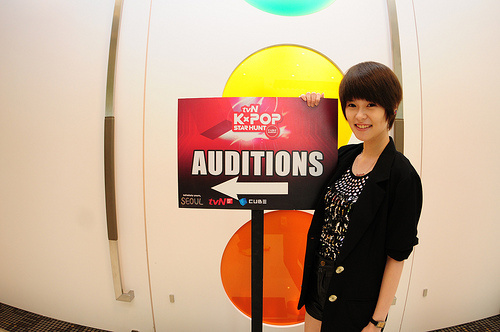 In 2011, Jayley joined tvN K-Pop Star Hunt, and was part of the top 20. Her sister joined the second season of the same competition, and made it to the top 16. Through these competitions, the sisters realised they they had a passion for the performing arts, including dancing, singing, and acting.

Her sister, however, prefers Girls’ Generation and if switcheroos were possible, Hayley would like to be Yoona.

With both sisters in showbiz, one would have thought that sibling rivalry is inevitable. The twins however seem to have gained immunity, and #JayOnTheHay’s relationship is still as close as ever, with both frequently appearing on the other’s Instagram feed.

Would they be the next By2 and even expand out of Singapore into bigger markets in time to come? We’re excited to see how fresh blood would help propel the local entertainment scene.

Featured image via Instagram
With reference to AsiaOne, Toggle, The Straits Times, AsiaOne, Lollipop, AsiaOne, Her World Plus, Asia One