The "unhealthy" PSI over the weekend was due to elevated ozone levels.

Haze & Burning Smell To Persist Over Parts Of S’pore On 2 Mar, Hotspot Blew Smoke Towards S’pore On 1 Mar

Some Singaporeans might have noticed that the view from their flats had gotten a bit more “romantic” lately. 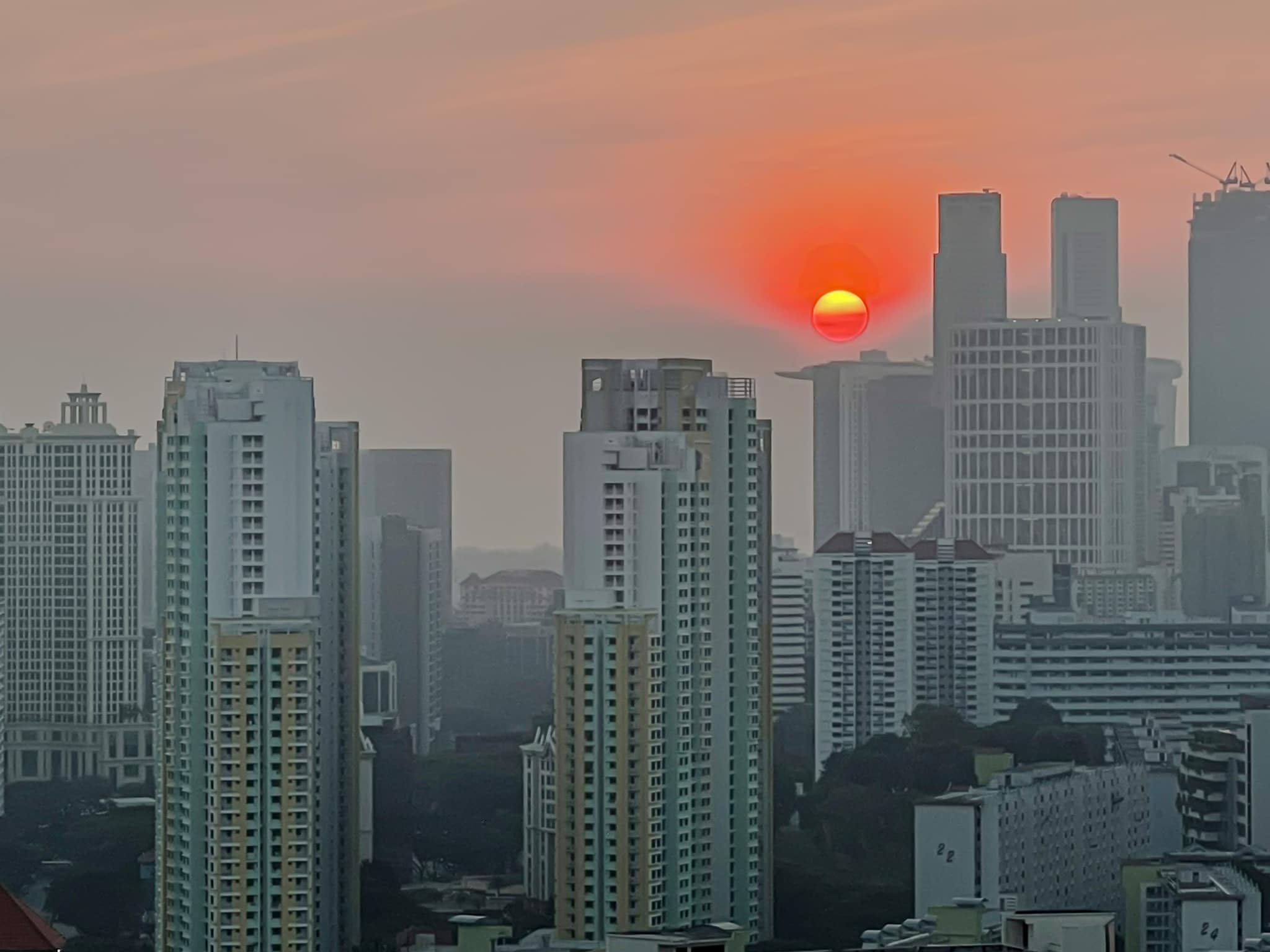 Many have also complained about a burning smell.

The agency also revealed that it detected a hotspot in Johor, which blew smoke towards Singapore.

In a Facebook post on Tuesday (2 Mar), the NEA acknowledged the burning smell that had been reported by Singaporeans since the weekend.

As for the Pollutant Standards Index (PSI), it hit the “moderate” level as of 12pm today, with all regions of Singapore reporting readings from 61-74.

The highest level of 74 was reported in the east.

Conditions to persist over Singapore on 2 Mar

Unfortunately, the NEA said the hazy conditions and burning smell would persist over parts of Singapore on Tuesday (2 Mar). 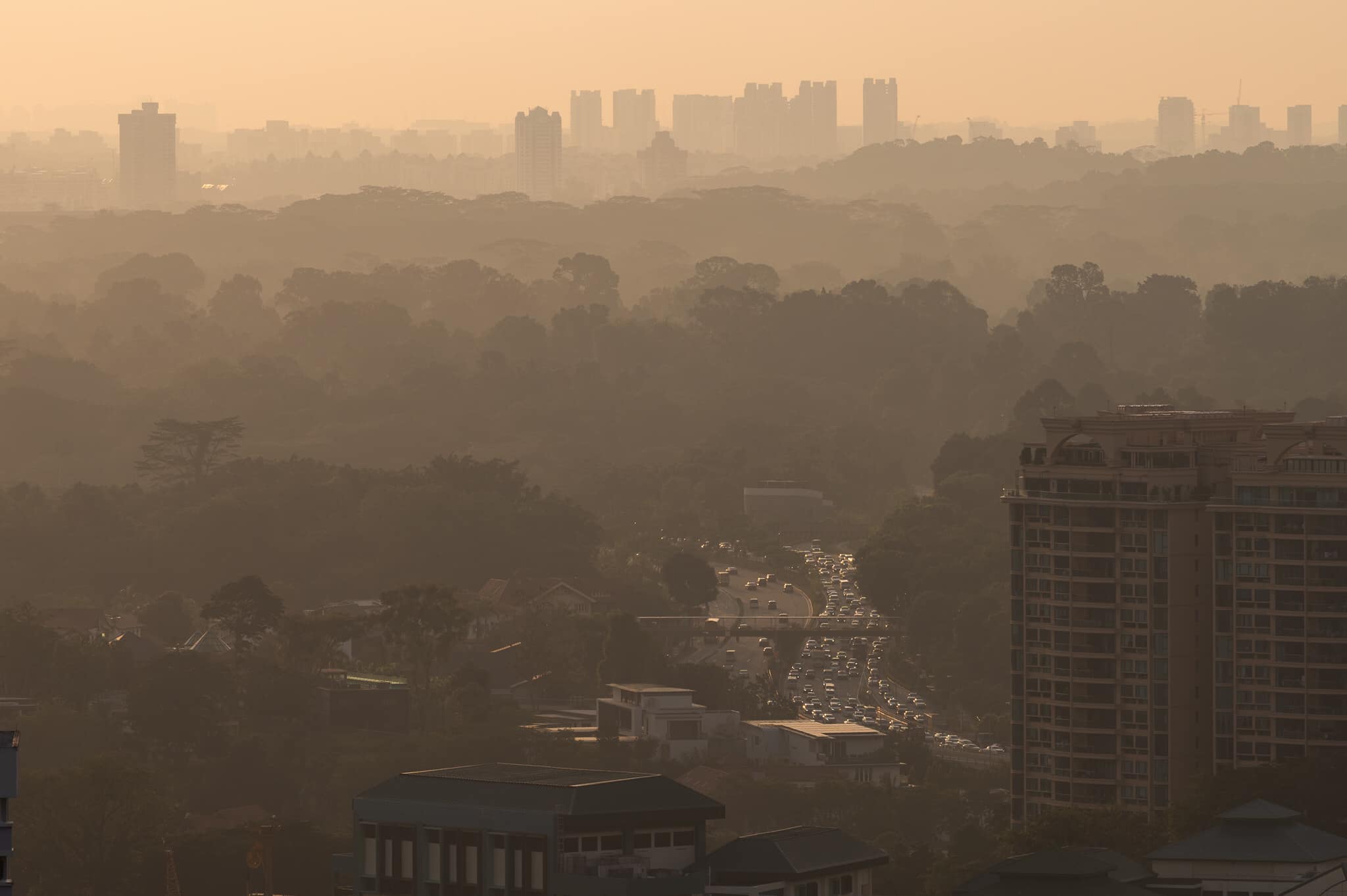 If this morning seemed particularly bad in the east, that’s because from 6-7am, the 1-hour average of levels of PM2.5 fine particulate matter with a diameter of 2.5 micrometres or shorter was “elevated” in the east.

It went back to the “normal” band from 8am.

Hotspot in Johor on 1 Mar

As for what might be the cause of the hazy conditions, the NEA said a hotspot emerged in Johor in the late afternoon on Monday (1 Mar).

The hotspot had a smoke plume, and as the prevailing winds were northeasterly, the smoke was blown towards Singapore.

The prevailing winds over Singapore will continue blowing from the north to northeast for the next few days.

The last 2 days may have been hazy, but it was apparently worse over last weekend.

Singaporeans with sensitive noses would have sensed the impending doom when the PSI level entered the “unhealthy” range on Saturday (27 Feb).

At 7pm that day, the reading for the north of Singapore hit 102. 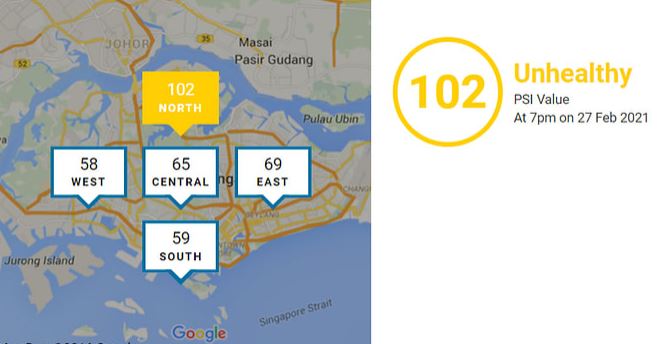 In a statement sent to MS News, the NEA attributed the unhealthy air quality on Saturday (27 Feb) to ozone. 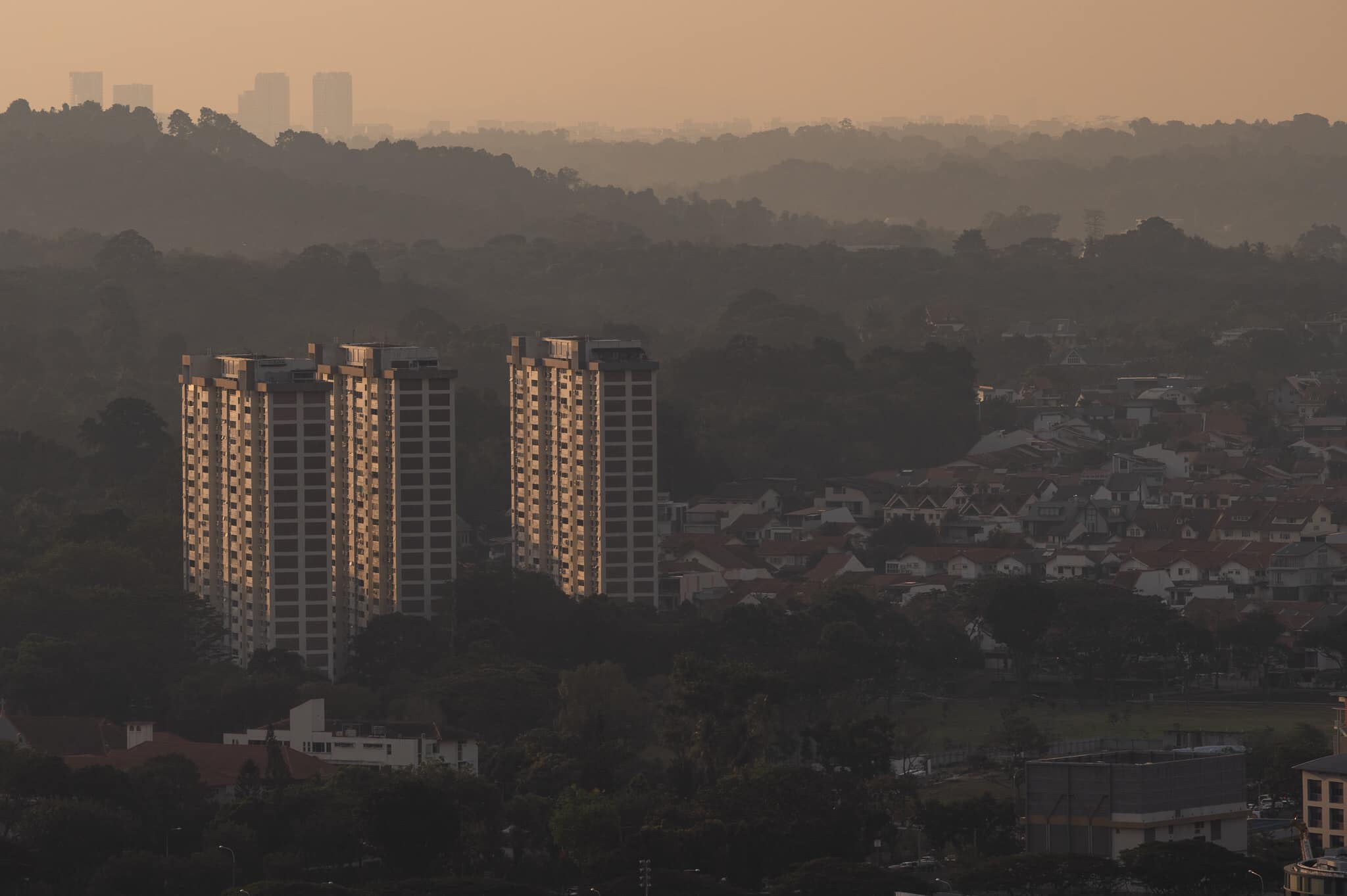 Ozone is a gas with pungent smell that’s made up of pollutants like nitrogen dioxide and volatile organic compounds.

Ozone formation may be due to high temperature

Although the NEA said these pollutants were within normal levels, other factors like temperature, ultraviolet radiation levels, wind speed, wind direction and rainfall can also cause ozone to form at ground level.

In this case, the recent hot weather may have played a part.

On Saturday (27 Feb), the maximum ambient temperature in the north was 35.3°C – the highest recorded there this year. 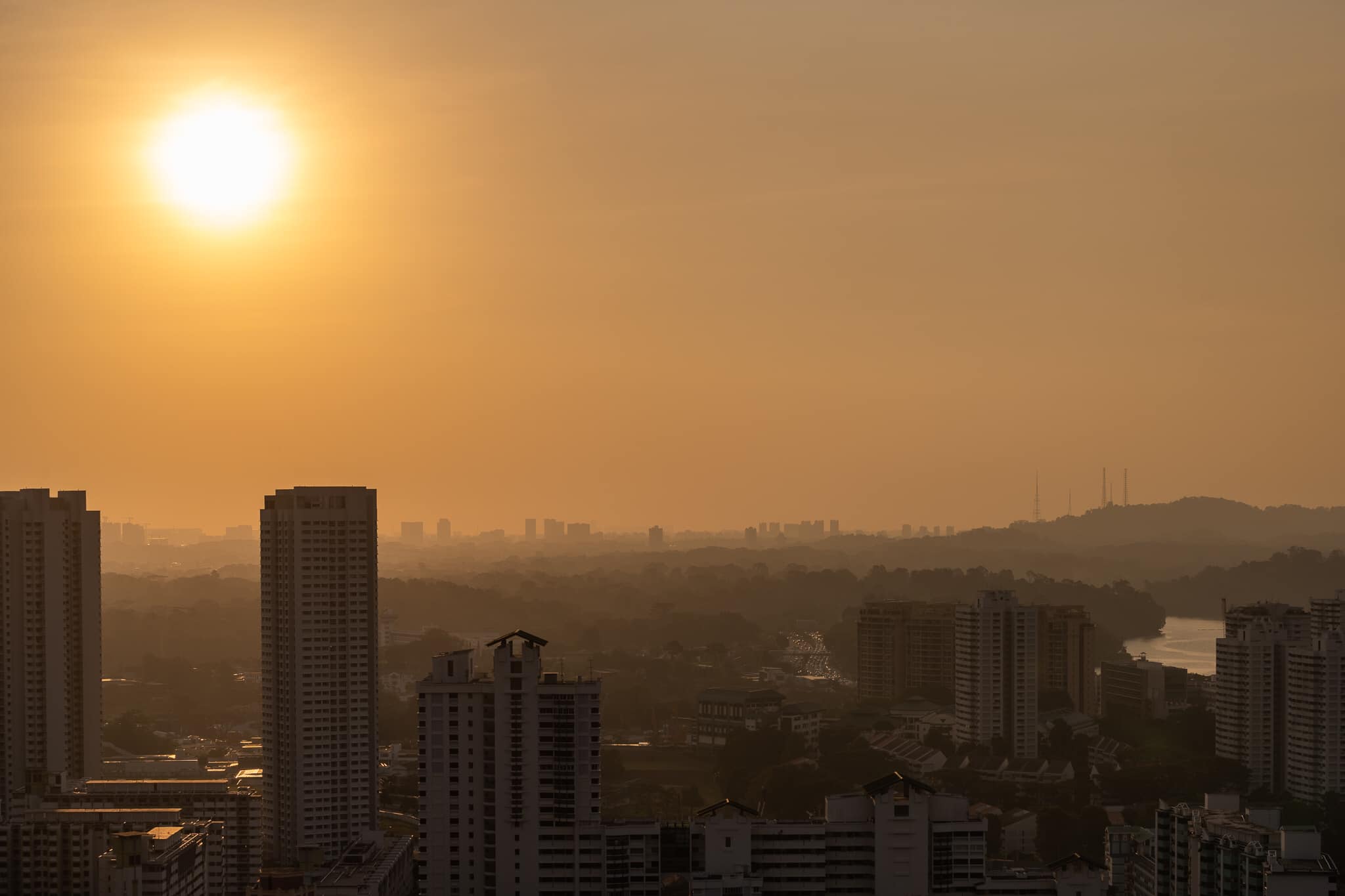 There was also a high level of ultraviolet radiation at the time, which could have combined with the heat to increase the amount of ozone in the air.

The PSI also measures ozone levels in a sub-index, based on an average of ozone levels over the past 8 hours.

That means the unhealthy air quality lasted at least 3 hours. 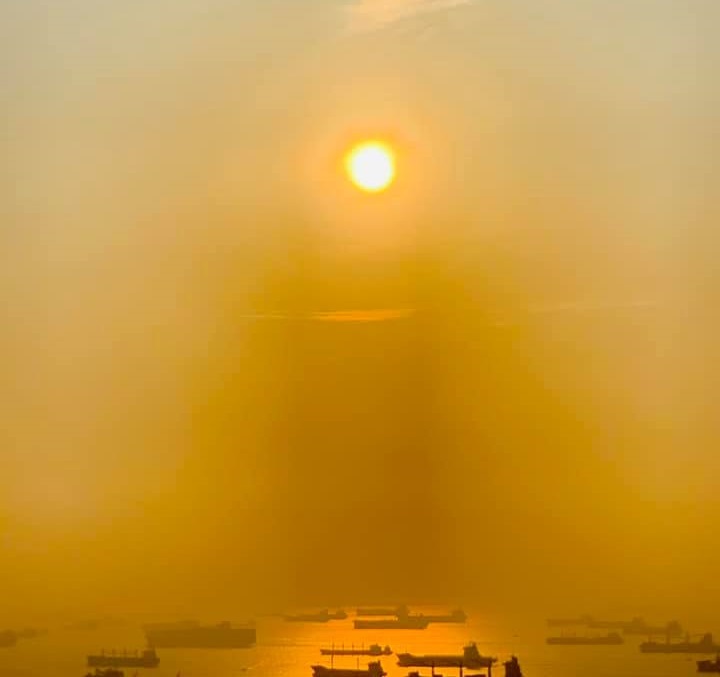 At that time, the unhealthy air quality lasted for 8 hours in the south region.

Unlikely that haze is from Indonesia this time

However, although the PSI level returned to “moderate” on Saturday (27 Feb) night, on Sunday (28 Feb), Singaporeans still complained of burning smell.

While it may be tempting to blame the persistent poor air quality on hot spots in Indonesia, the NEA has said this is unlikely.

The Meteorological Service Singapore told The Straits Times that the prevailing winds over Singapore will be from the north to northeast over the next few days.

Thus, it’s not likely that any smoke from hotspots in Indonesia will blow towards us.

Many reasons have surfaced for the haze and burning smell that has persisted in Singapore for the last 4 days.

From heat and ozone levels to a hotspot in Johor, it seems like there’s no stopping the various elements that are conspiring to wreak havoc on our breathing.

So if you’re intending to take part in outdoor activities, do check the latest air quality readings first and decide whether you can tahan or not.

We’ll also be looking forward to the rain that’s predicted to come in the 2nd week of Mar.

But hey, thanks to Covid-19, at least we’re all wearing masks already, right?