In a multi-religious society like Singapore, respect for different beliefs is often unspoken, but tangible gestures are appreciated nonetheless.

One such gesture recently was by an interior designer at IKEA, who did something not many may have noticed — placing a prayer mat in a room display.

An observant customer thankfully did, and decided to share it with the Internet.

Mr Mohammad Khalid was at IKEA’s Tampines outlet on Friday (20 Nov) when he noticed an interesting detail in one of the setups.

Not revealing exactly what it was, he simply posted a photo with an inspiring caption. Besides expressions of pleasant surprise, one user tagged IKEA’s interior designer in the comments, praising her for her hard work. 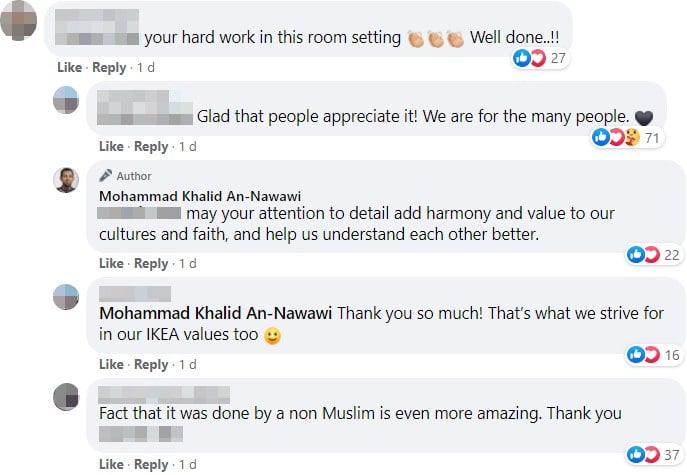 Humbled by the compliment, she explained how she’s merely portraying IKEA’s effort to add harmony to their work.

Some suggested that IKEA give her a pay raise, while one went to the extent of offering her a treat on his next visit to the furniture store.

Whether she’ll take up the offer is unclear, but the overwhelming kindness all around certainly touches our hearts.

Not the first time IKEA has done this

According to another commenter, this isn’t the first time IKEA has included a prayer mat in its display here.

They apparently did the same last year too. We’re not sure if the same designer was behind last year’s setup, but kudos still go to IKEA for their attention to detail.

Hope for more of such heartwarming gestures

Be it everyday details or special ones like decorations to commemorate cultural festivities, we hope more retailers and public spaces will continue to be inclusive.

Besides earning the gratitude of the respective communities, such gestures also remind us to be more aware of and respectful towards different cultures and religions.

Let’s keep fostering a harmonious society together, and learn to love our neighbours equally.