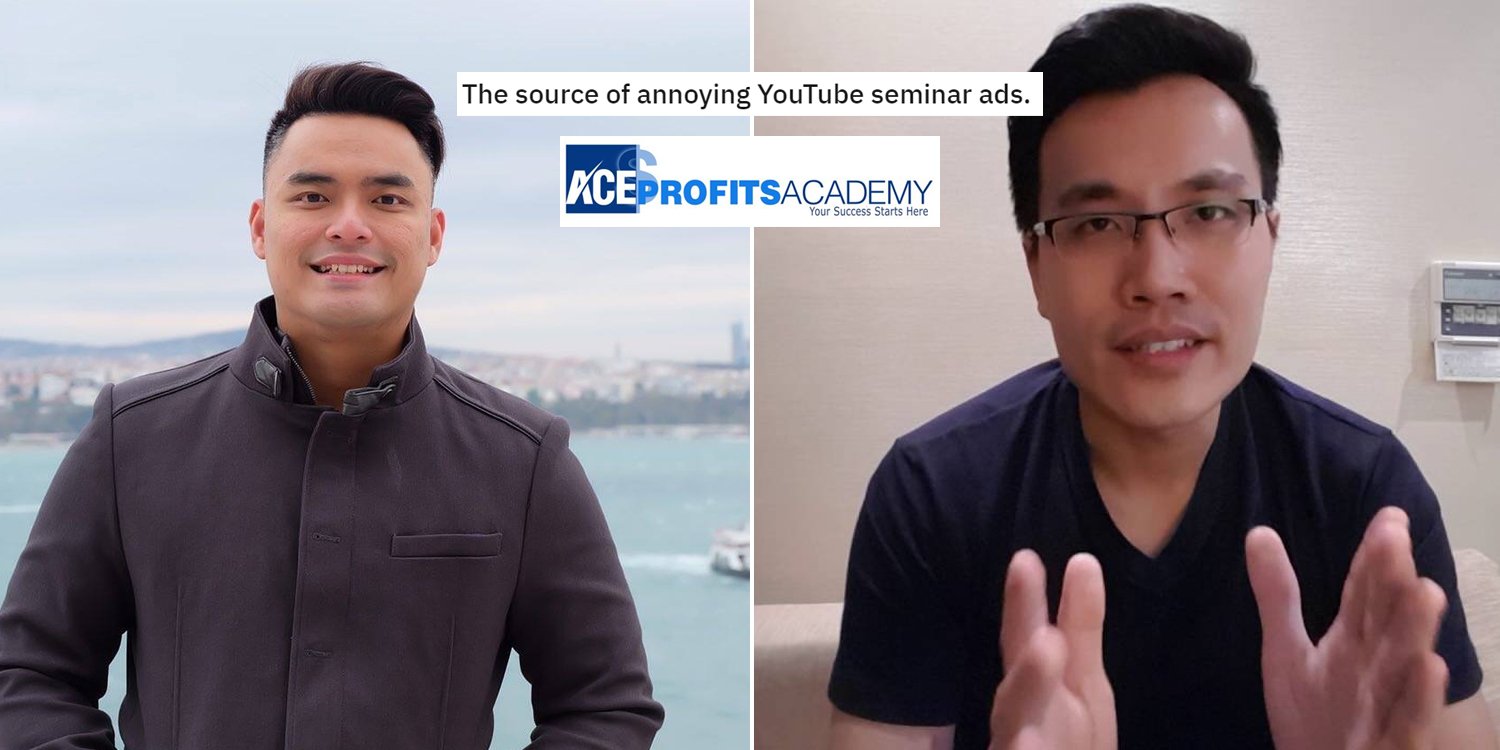 UPDATE (16 Sep, 4pm): Imran has clarified on a video posted onto his Facebook page, saying that the allegations of him being under Ace Profits Academy are untrue.

Hello, our name is MS News and today we’ll be teaching you how to write a good article and make lots of money, which you can even do while travelling! Isn’t that great?

It would be, if YouTube ad sensation Imran would indeed teach us how to rake in the big bucks. And we’re not talking about that hulk of a soldier Imran.

One Redditor, perhaps frustrated at Imran’s appearances before his YouTube videos, decided to investigate further — particularly, the company he supposedly works for, called Ace Profits Academy. 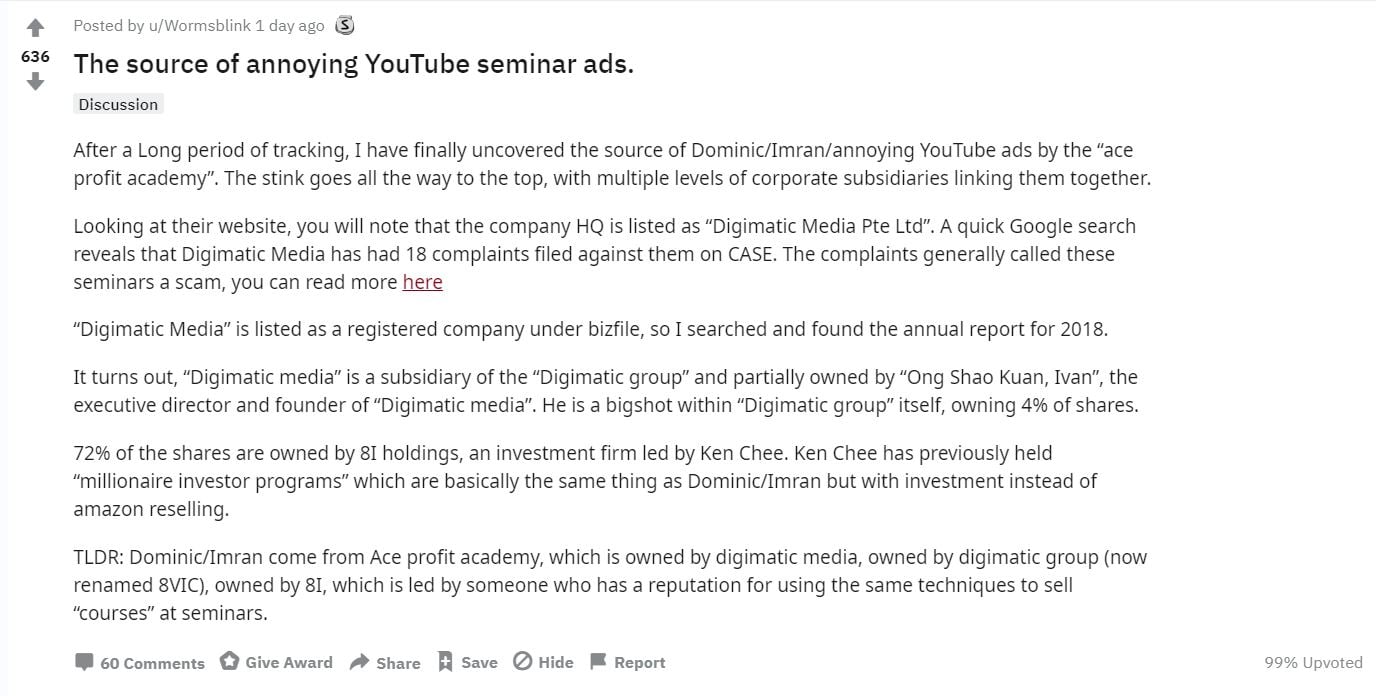 UPDATE (19 Sep, 12pm): 8I Holdings has clarified that they’ve disposed of all their shares in Digimatic Media as of 2 Oct 2018. Since the disposal, 8IH is no longer related to any entities with “Digimatic” and “Digimatic Media” as part of their names.

This Redditor is of the opinion that there’s a chance that YouTube ads featuring Imran and Dominic could potentially be a “scam”. We investigate his claims further below.

According to the Redditor, Imran & Dominic apparently work for a company called Ace Profits Academy.

A check on the academy’s website reveals that the HQ is under Digimatic Media Pte Ltd. 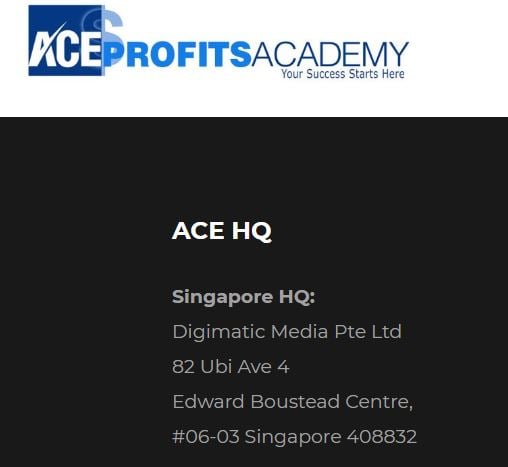 Of course, do take note that the above theory is based on the Redditor’s preliminary research. The plot soon thickens – we’ll get to Imran’s side of the story later – but let’s take a look at the background of the company mentioned in the Reddit post first.

The Redditor points out that Ace Profits Academy has 18 complaints filed against them through the Consumers Association of Singapore (CASE). A look at CASE’s website confirms this. The complaints are generally that the courses – some of which can cost up to $5,000 – teach participant money-making techniques which were either “not feasible or had resulted in poor sales”.

Other complaints include things like the instructor being slow to respond or ignoring the participant’s queries after collecting payment.

Dominic’s company, Leverage Leap Pte Ltd, was the only other company to have received CASE complaints under the Education category on their Company Watch List. 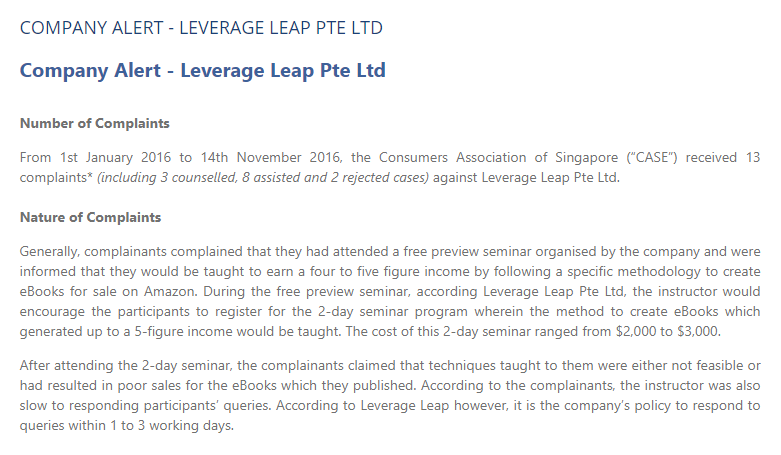 In a video posted on Mon (16 Sep), Imran refutes the Redditor’s claims and explains that he does not and has never worked under Ace Profits Academy.

He then clarifies that he has held some pilot courses under a company called The Profits Academy.

You can watch the 2-min live video here.

Regardless of whether Imran actually does work for Ace Profits Academy, it’s considered a company that isn’t regulated — at least according to the Monetary Authority of Singapore’s Investor Alert List.

This means that even though the company isn’t doing anything illegal, customers who engage their services will not be protected by MAS in case anything goes wrong.

So the next time you’re contemplating attending a financial seminar, you may want to check the CASE website’s Consumer Alert List first.

That could save you invaluable amounts of time and money in the long-run.