He felt the issue did not meet people's expectations.

Update (29 Sep): In response to MS News queries, spokesperson for the Workers’ Party Media team, Leon Perera, has declined to comment on the result of the ballot and whether they will be filing the motion in the next Parliament.

From being convicted of theft to getting fully acquitted, ex-domestic helper Parti Liyani’s journey was one of the most riveting stories to hog headlines in 2020.

To officially discuss the criminal justice system with regard to her case, Sylvia Lim of Workers’ Party filed an Adjournment Motion (AM) on 14 Sep. Coincidentally, 4 other MPs filed as well to speak on their issues of interest.

Last night, the AM ballot results were announced. Nee Soon MP Louis Ng has been chosen to speak on the topic of “Protection against secondhand smoke in our homes”.

Louis Ng Wins Ballot To Raise Parliamentary Motion, Sylvia Lim Has To Wait For Next Sitting

Following this development, NCMP Leong Mun Wai of Progress Singapore Party (PSP) posted on Facebook to express his wish that Ms Lim’s topic was addressed instead as it was a more pressing issue.

On Wednesday (30 Sep), Mr Leong opined that most Singaporeans would probably prefer the Parti Liyani case to be heard first, compared to secondhand smoke. 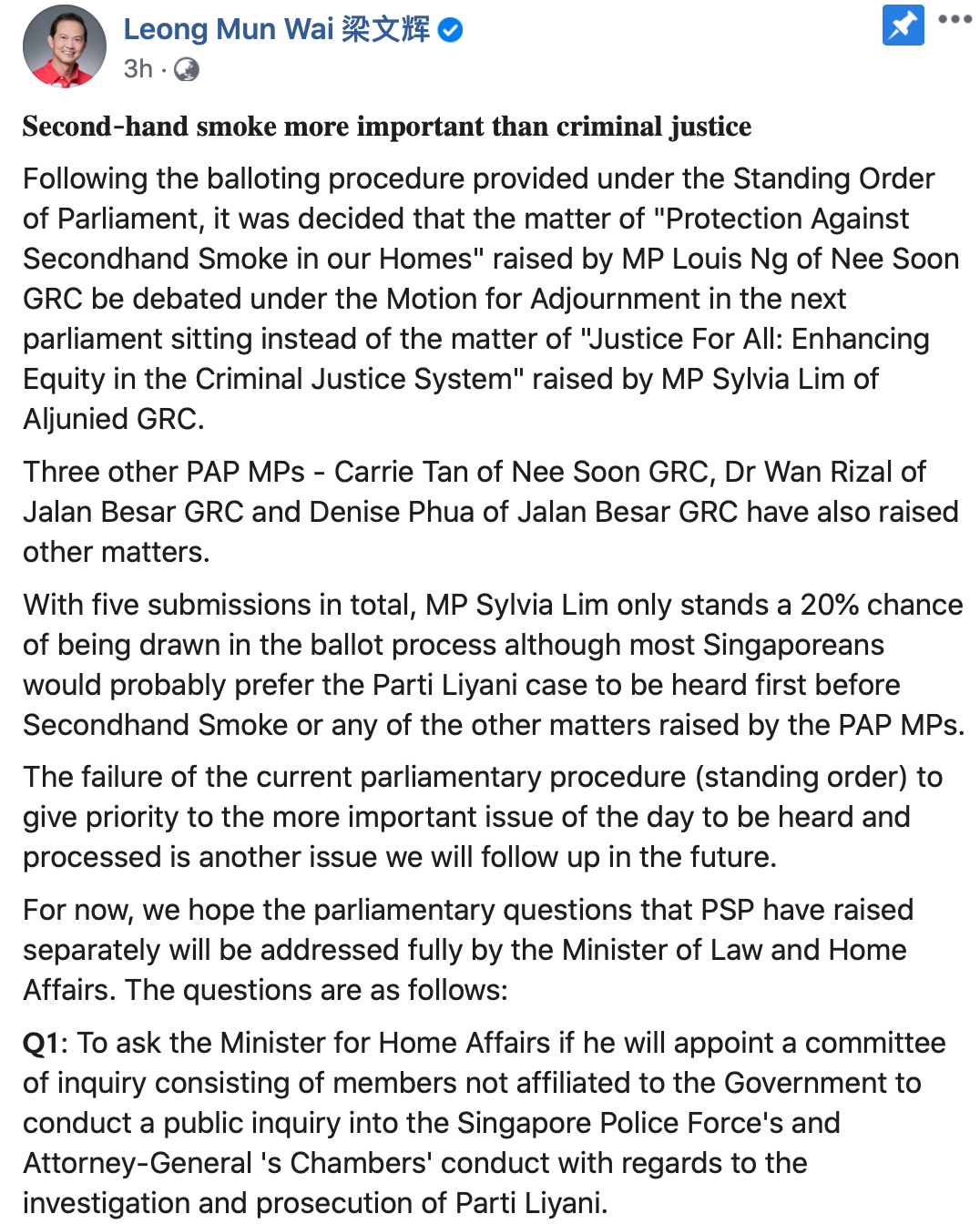 He felt the current parliamentary procedure (standing order) should give priority to the more important issue to be heard and processed”.

Fielding a list of questions in his Facebook post, Mr Leong said he hopes the Minister of Law & Home Affairs can address the following with regard to Parti Liyani’s case:

You can check out the full list of questions here.

Speaking to MS News, Mr Leong said he recognised that the ballot is provided under SO 2(8)(d) and conducted by the Speaker.

“Granted that all the issues raised by the other MPs are important and the Speaker has also been fair and proper in the process, but in this case political sensitivity to the people’s expectations is also important,” he noted.

This time it did not meet the people’s expectations.

In regards to this, Mr Leong plans to advocate for a reform of this procedure in the future. But nonetheless, he is fully behind the AM, saying PSP “will fully support the secondhand smoke motion”.

In Singapore’s Parliamentary procedure, only 1 AM is allocated for each Parliamentary sitting. If more than 1 AM is filed, they would be balloted.

For the next Parliament Sitting on Monday 5 Oct, 5 MPs had filed motions:

Ms Lim’s AM sought to look into “Enhancing Equity in the Criminal Justice System” in light of Ms Liyani’s case.

All the MPs who filed AMs were seeking to address pertinent issues that Singaporeans care about.

With regard to Ms Liyani’s case and purported miscarriage of justice, this is understandably the most pressing issue Singaporeans want addressed on a parliamentary level.

We hope the government will still be able to discuss her case in the next sitting, and reach a satisfying conclusion.