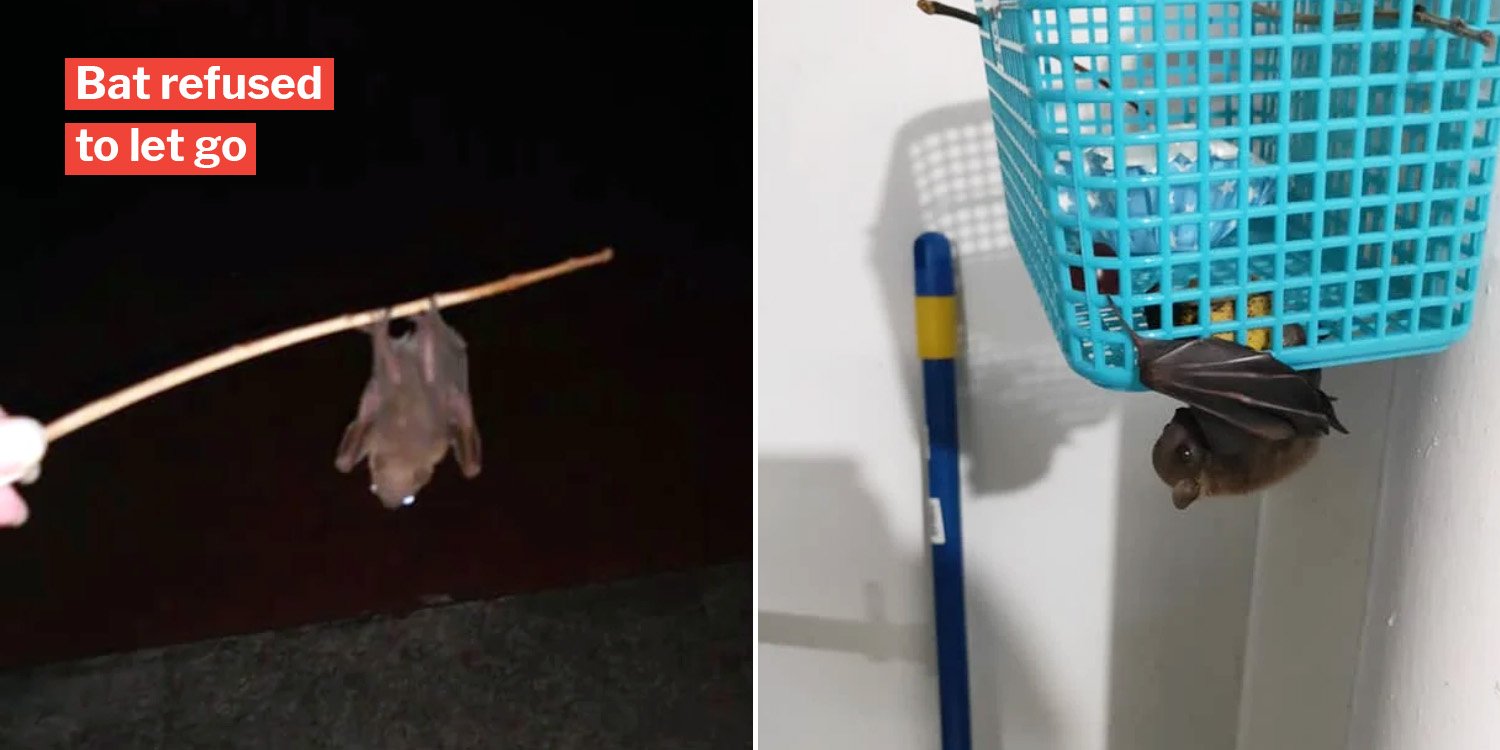 The man has taken on the mantle of 'Batmum'.

Wildlife creatures in Singapore have a way of finding themselves in our lives. From otters stumbling into buildings to monkeys scaling our home facades, their appearances are becoming more of a regular occurrence.

Rare African Hornbill Spotted Near ECP, It Looks Like Zazu From Lion King

For this Singaporean man, however, wildlife came to him and never left after he rescued a baby bat who was seemingly immobilised on the ground. After attempting to get help from ACRES, he decided to bring the bat home as it was late into the night. 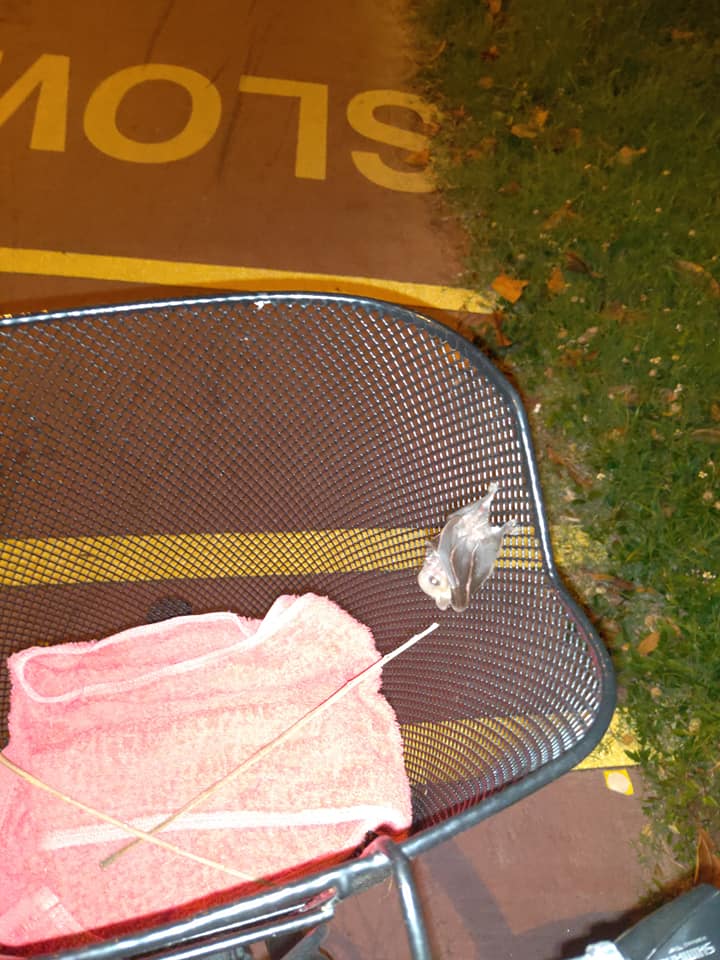 Much to his surprise, the bat wasn’t injured or ill, and has been living out of the man’s bicycle basket ever since. He has been reluctantly taking care of the creature and providing updates on his Facebook account.

Baby bat didn’t fly off after moving to grass patch

According to the man, he stumbled upon an unidentifiable creature at Bedok South last Saturday (7 Aug). 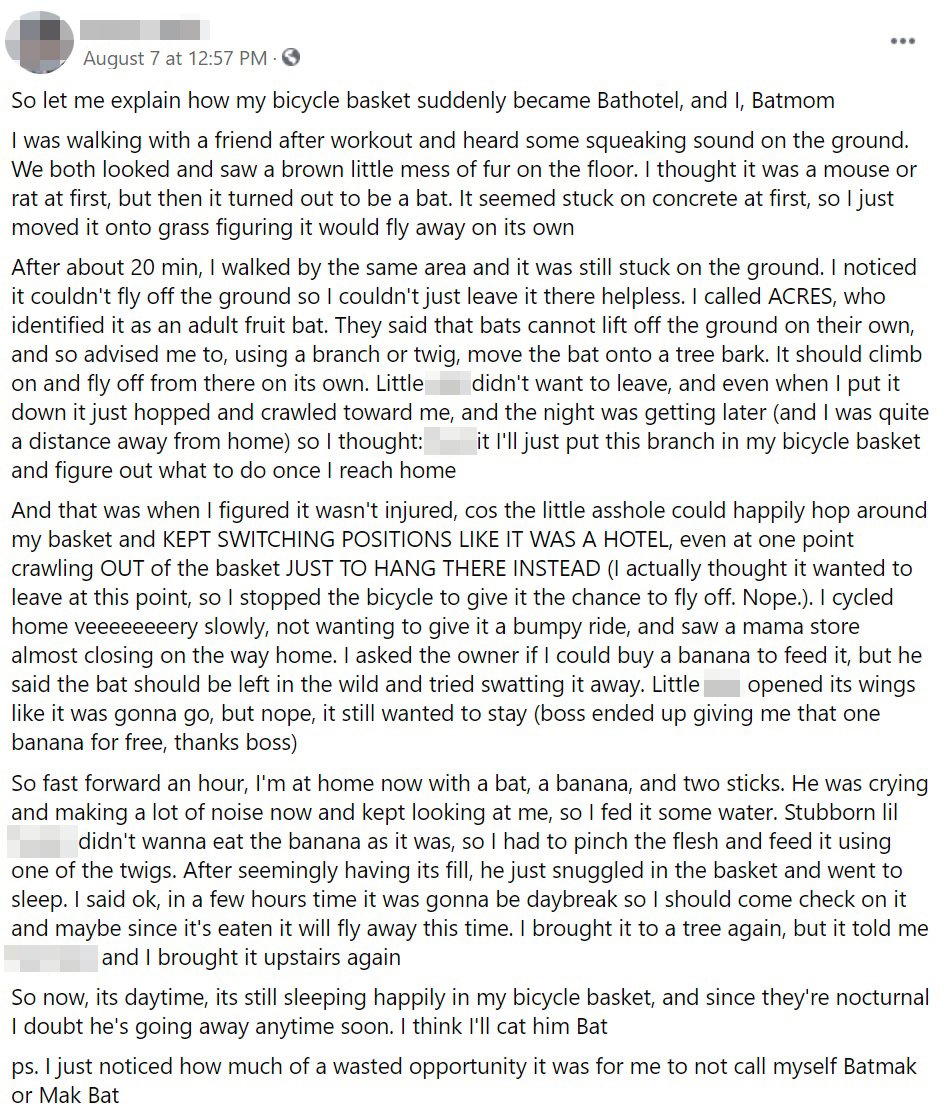 He had apparently heard squeaking noises and found the creature seemingly stuck on a concrete path.

Going in for a closer look, the creature turned out to be a bat.

The man then carefully moved the animal towards a grass patch and away from any potential dangers. 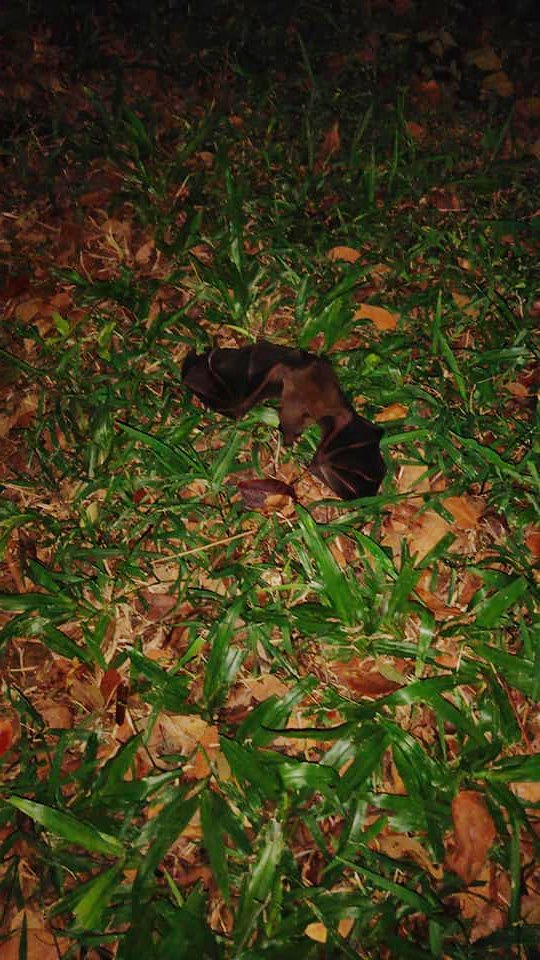 However, after circling around the area, the man found the baby bat still planted on the same spot.

Seeing as the creature hasn’t flown off into the night, he called ACRES for assistance.

Through the phone call, ACRES successfully identified the creature to be a fruit bat — a creature commonly found in Singapore.

The man was then instructed to move the juvenile bat to a tree bark as bats cannot lift off the ground on their own. He was told that the animal would naturally fly off on its own after that. Despite several attempts, the man couldn’t shake the baby bat off him. The creature had seemingly taken a liking to the man and even crawled toward him after he tried to lay it on the ground.

Since it was getting late, the man decided that it was a problem he’d rather solve at home and brought the baby bat with him.

The bat, which was hanging by a tree branch, was placed in the bicycle basket. As he was heading home, the man was surprised when he noticed the animal hopping around the basket.

Apparently, the winged mammal wasn’t injured at all and seemed perfectly fine. In fact, it was so full of life that it shifted positions and even crawled out of the basket so it could hang off it. 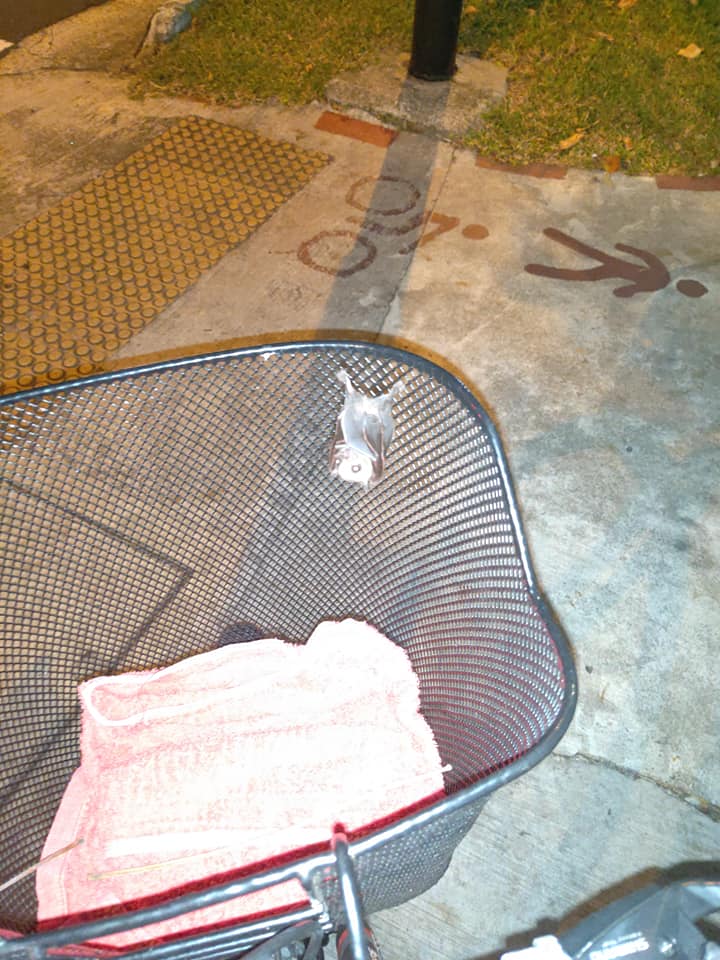 After the whole ordeal, the man now finds himself at home with a baby bat that has refused to leave after 3 days.

The man has also been updating his Facebook with updates on the bat’s well-being. 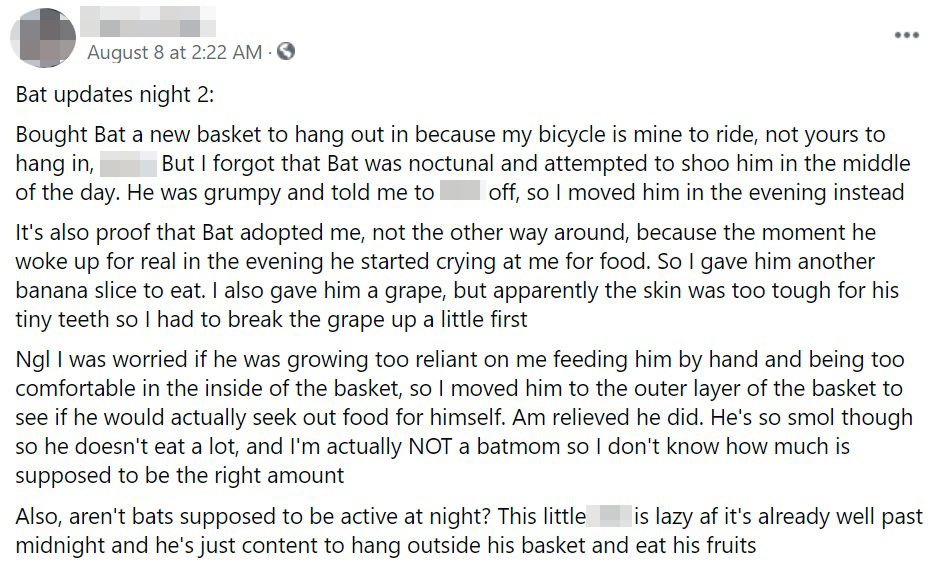 He even bought his newfound friend a new basket to hang on to. 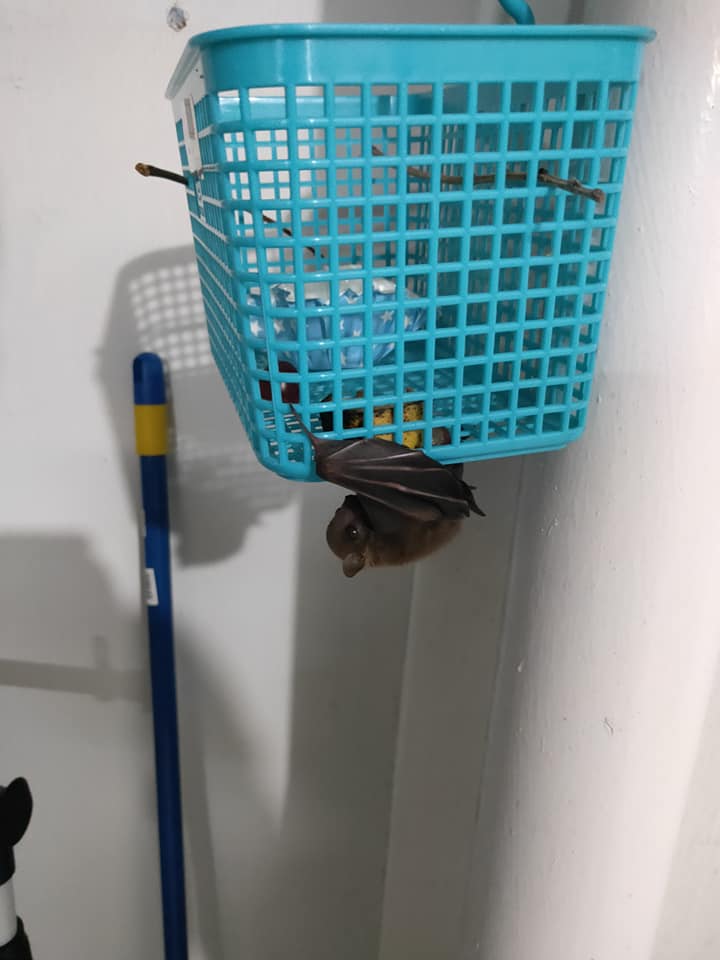 He also joked that he has taken on the mantle of ‘batmum’ and has been feeding it various fruits. 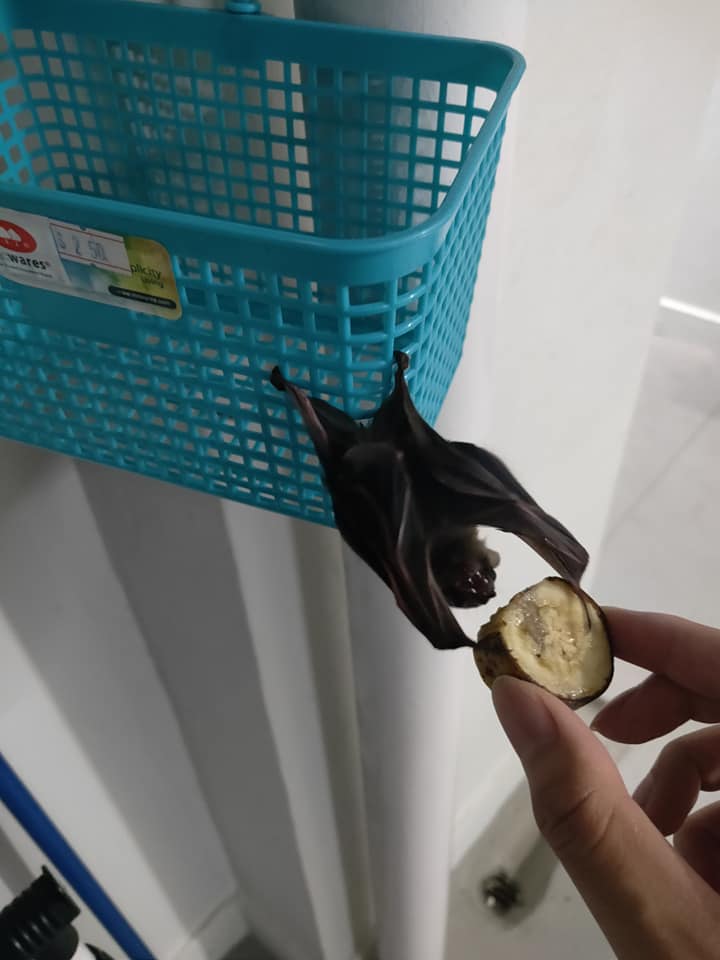 In his latest update on Tuesday (10 Aug), he shared that he doesn’t intend on keeping it as a pet. In fact, he has been training it to fly in hopes of releasing it back into the wild soon. 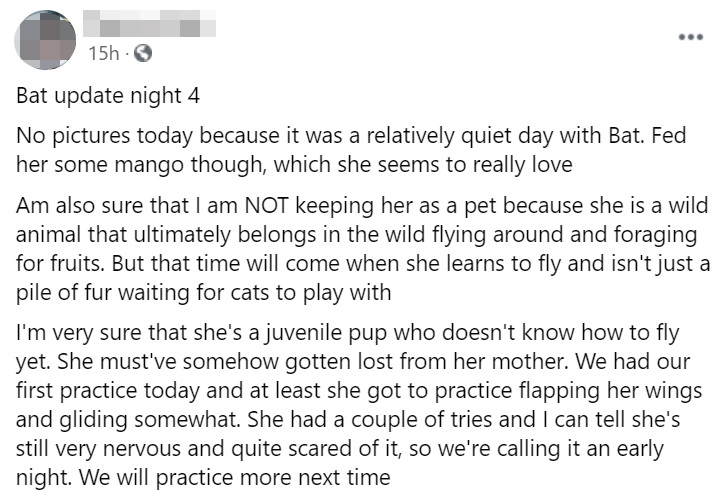 Hope it will return to the wild soon

It’s not every day that one becomes an unwilling parent of a baby bat, but it seems this man has certainly taken on the challenge in his stride.

While it’s been fun keeping up with the baby bat story, we hope that it will return to the wild soon.

Kudos to the man for going the extra mile to take care of the baby bat all this time. We’re sure he’ll find a purpose for his new basket when the bat eventually departs.