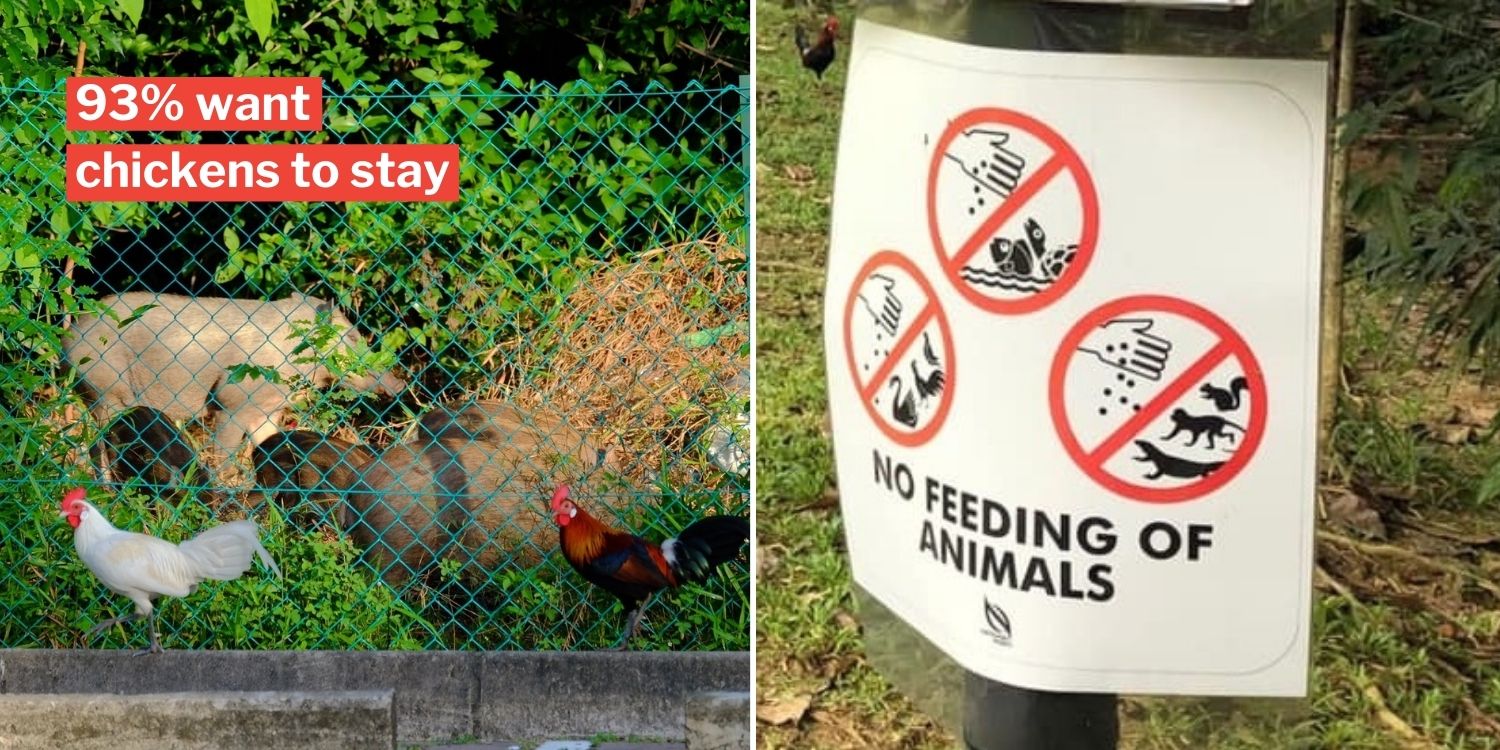 While Singapore is mostly known for being a concrete jungle, we surprisingly have quite a lot of wildlife roaming around our crowded island.

Sometimes, the interaction between humans and these wild animals may not be so pleasant.

Thus, the Government has been trying to balance some Singaporeans’ love for our natural environment and wildlife with others’ desire to control it before humans are harmed.

Over at Pasir Ris, which is well-known for its wildlife, residents were polled on these animals, and the majority of them wished for them to remain. 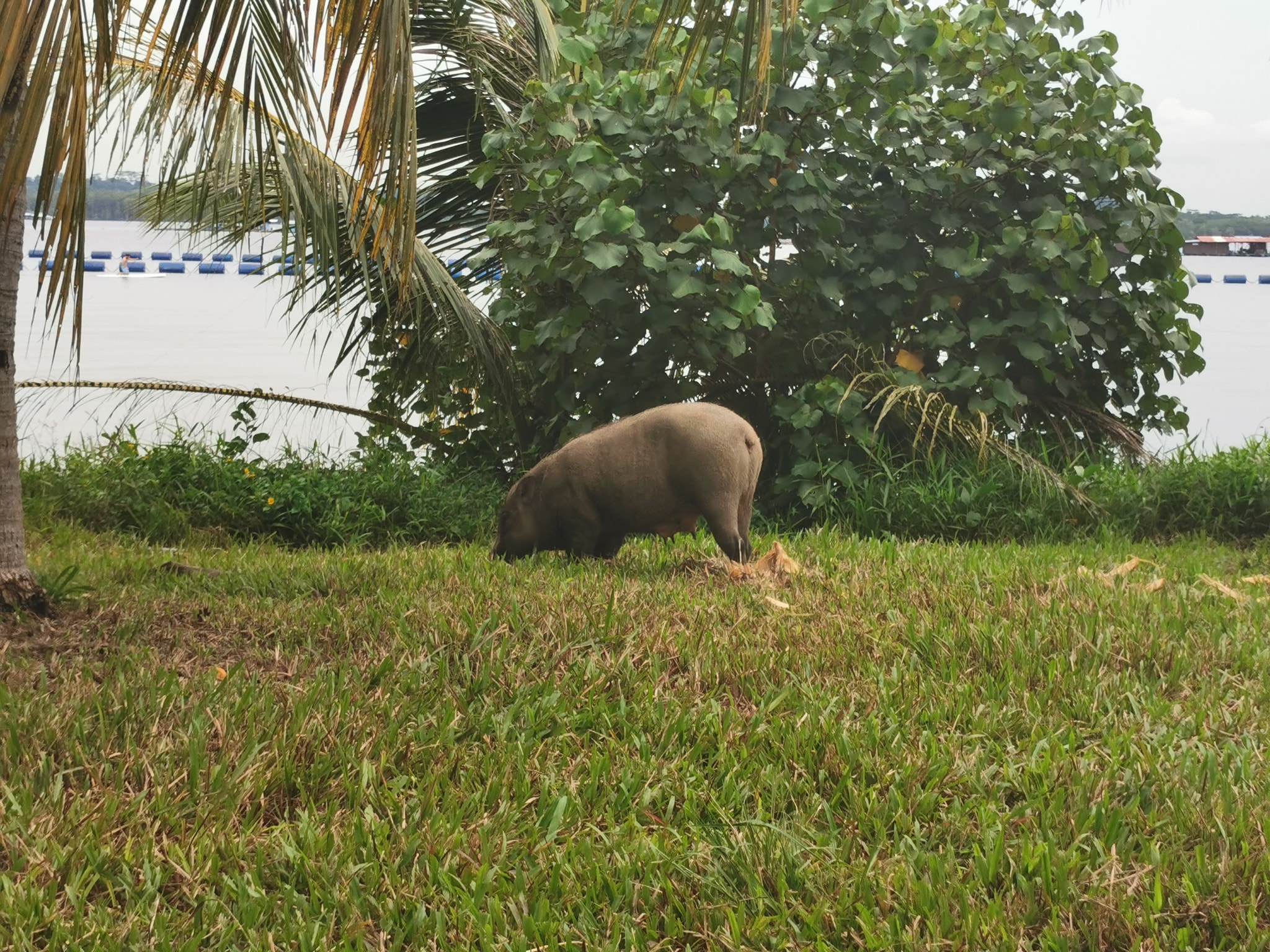 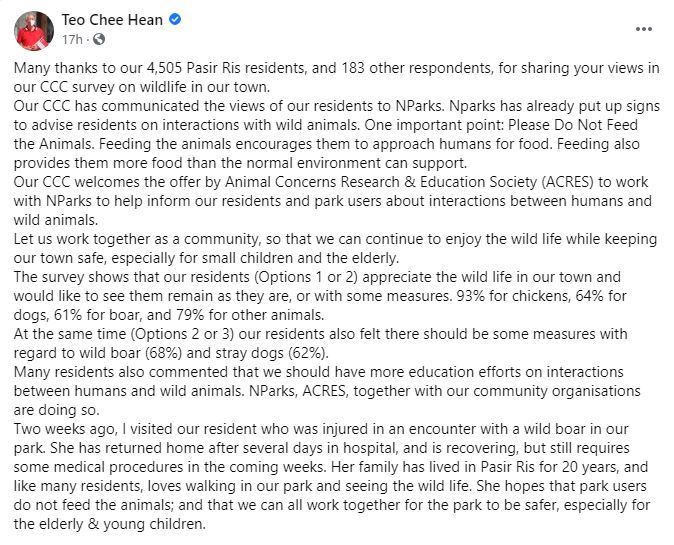 He also said many residents desired more efforts to educate people on interacting with wild animals.

The Survey on Wild Animals in Pasir Ris Estate was posted by Mr Teo, who is also a Member of Parliament for Pasir-Ris Punggol GRC, on 22 Nov.

He said 4,505 Pasir Ris residents took the survey, as well as 183 others from other parts of Singapore — making a total of 4,688 respondents.

They were asked about 3 types of wild animals commonly seen in the estate: Wild chickens, stray dogs and wild boars, as well as other animals.

They were also given 3 options on how to deal with them:

93% want chickens to stay, less so for other animals

According to the data, an overwhelming majority of 93% of Pasir Ris residents wanted the chickens to stay, with or without controls.

However, the majority that wanted the rest to stay was smaller, with 64% for the stray dogs, 61% for the wild boars and 79% for other animals. 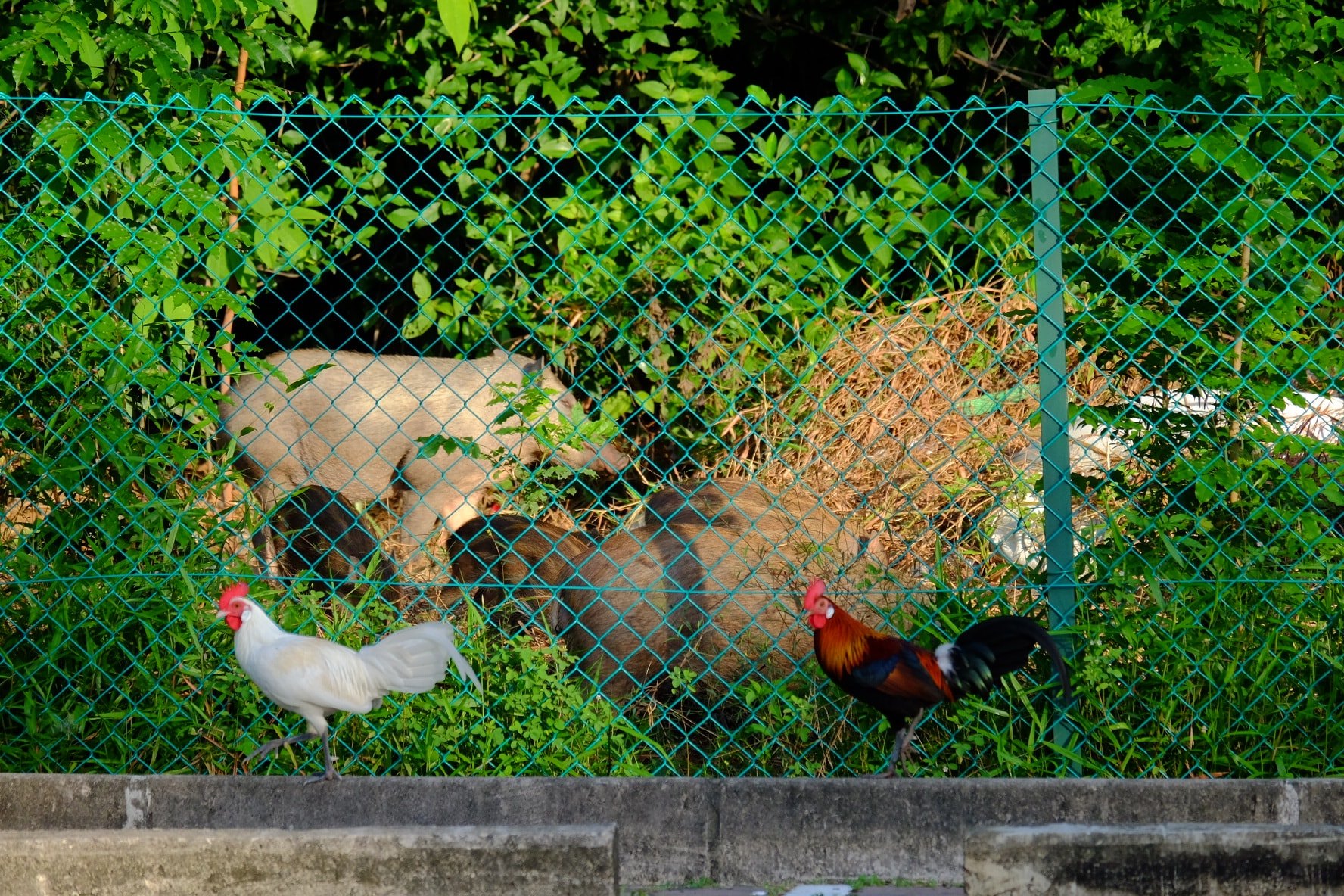 Looks like Pasir Ris’ wild chickens have endeared themselves to residents more than the other animals.

Kudos to the authorities for calling for public feedback too, after receiving criticism in 2017 when the free-roaming chickens in Pasir Ris were culled without consulting residents first.

Majority want some form of controls on stray dogs & boars

According to the results, a majority of residents also wanted some form of controls on wild boars and stray dogs.

68% opted for options 2 and 3 with regards to wild boars, meaning either let them stay with controlled numbers or get rid of all of them.

For stray dogs, 62% indicated these options. 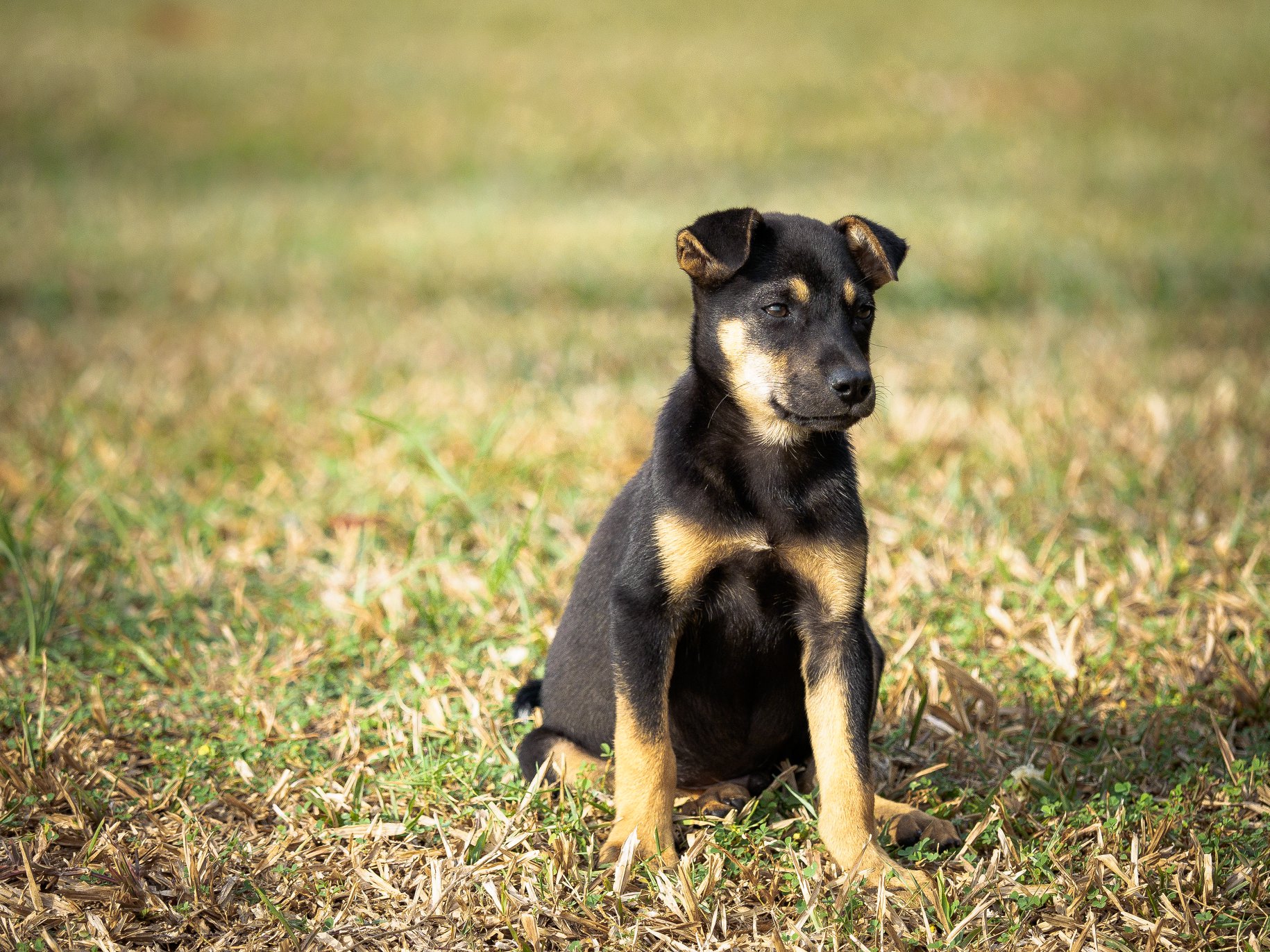 In contrast, just 29% of residents voted to impose controls on wild chickens.

He said the National Parks Board (NParks), Animal Concerns Research and Education Society (ACRES) and various community organisations are already doing that.

Meanwhile, NParks has erected signs to advise residents on what to do when they encounter wildlife, especially wild boars. 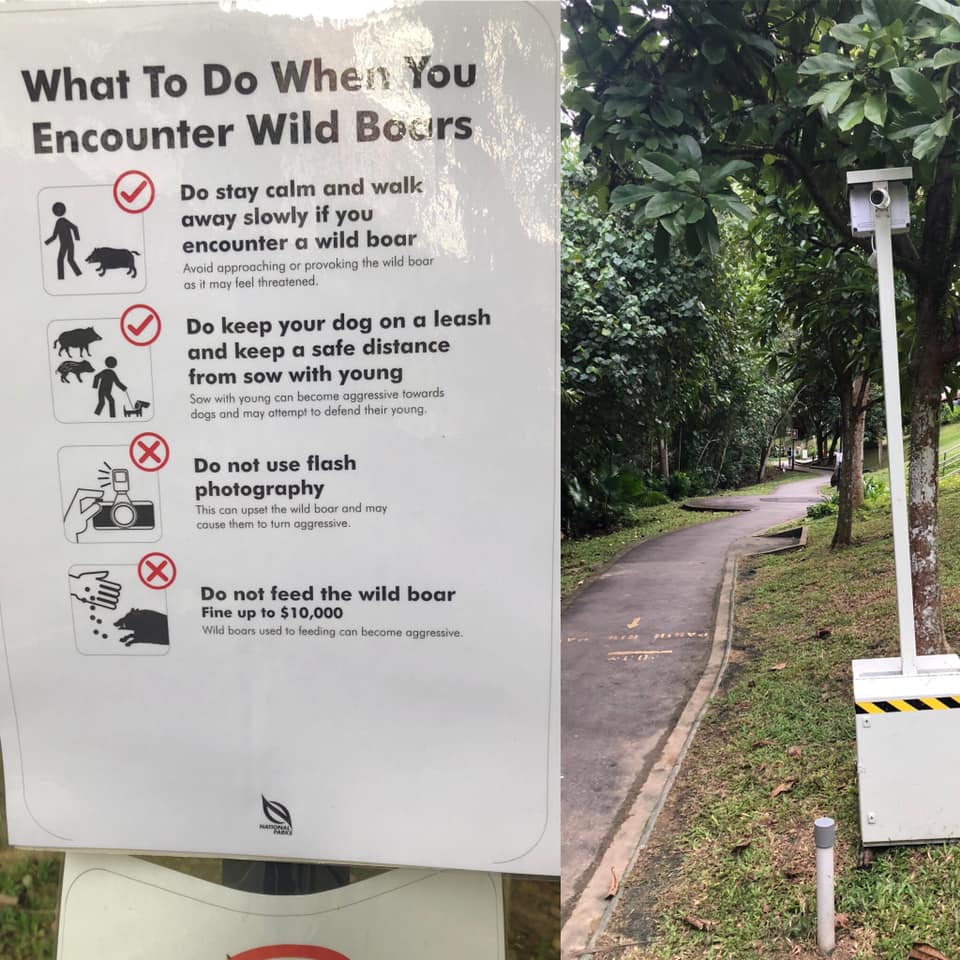 From the poster, we’re supposed to stay clam, keep a safe distance and don’t use flash photography, among other things.

Mr Teo also specifically emphasised one point: Do not feed the animals, no matter how hungry they look. He said feeding the animals will encourage them to approach humans for food, which may result in a negative encounter.

By feeding animals, they also will get more food than what the normal environment can support, he added. Feeding wild animals may also make you poorer, as offenders may be fined.

Woman hurt by boar is recovering

The survey was sent out in the wake of an incident where a female Pasir Ris resident was charged at and struck by a wild boar in Sungei Api Api on 17 Nov. 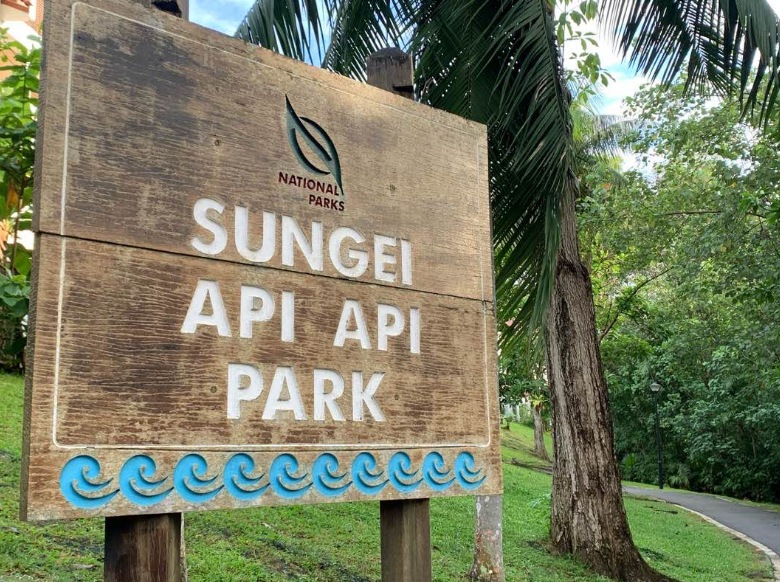 Mr Teo provided an update on the woman, who had to undergo surgery for her injuries.

He visited her 2 weeks ago, after she returned home from hospital.

While she’s recovering, she will have to undergo more medical procedures in the coming weeks.

However, the 50-year-old, whose family has lived in Pasir Ris for 20 years, doesn’t seem to have been deterred from wildlife after the incident.

Mr Teo said she loves seeing them while walking in the parks.

She also expressed the hope that the public doesn’t feed the animals in parks and we can cooperate to work towards park safety.

Living harmoniously with other creatures

While the woman’s case was shocking, it’s good that most Pasir Ris residents didn’t leap to drastic conclusions after the incident and urge the authorities to get rid of all wildlife.

The rustic character of the estate won’t be the same without the animals, and rather than worrying over safety, residents can try to understand more about wildlife and how they behave.

With a bit of education, we can all learn how to live harmoniously with the natural environment, and that includes the creatures in our midst.