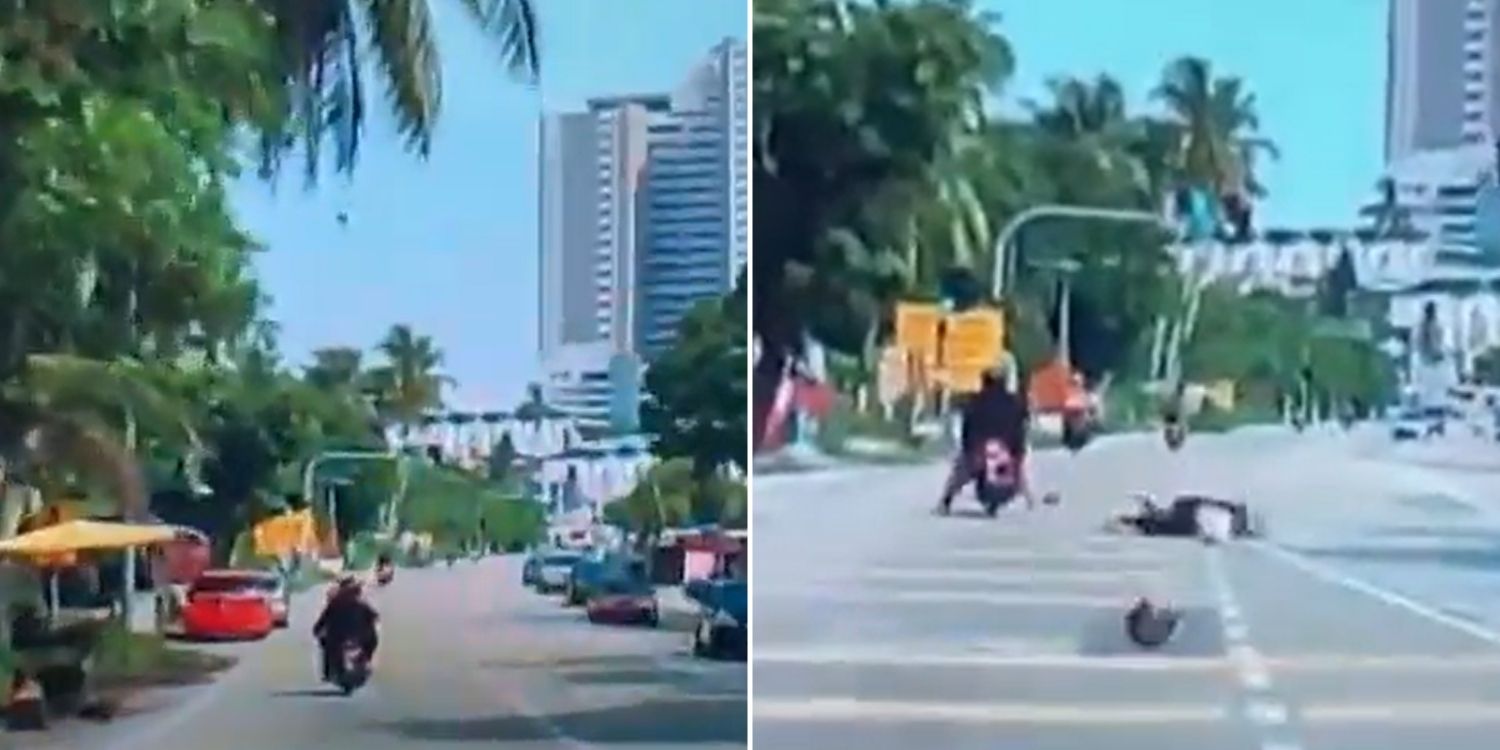 The road can be an unpredictable place. But while we usually hear of incidents involving multiple vehicles or errant pedestrians, it’s not often we hear of motorists encountering dangerous falling fruit.

However, that was recently the case in Penang, Malaysia when a pillion rider fell from her seat after a coconut dropped right on her head in the middle of the road.

Her daughter later shared that the victim suffered a broken shoulder, hand, and ribs.

The authorities have since declared that they will remove the trees to prevent further mishaps.

Woman injured after coconut hit her helmet in Penang

On Sunday (26 Jun), Sin Chew Daily reported that a motorcycle passenger was injured on a road in Penang after a coconut fell and hit her helmet.

Malaysia Gazette shared dashcam footage of the bizarre and terrifying moment on Twitter.

The clip shows the woman riding a motorcycle on Jalan Teluk Kumbar in Penang when suddenly, a coconut comes hurtling down from a nearby tree.

It hits her directly on the head, and the impact is so great that her helmet comes right off. She also falls off the pillion and rolls onto the road.

Upon realising what just happened, the driver of the motorcycle wobbles for a few seconds before braking. She then immediately runs towards her passenger.

A few passers-by also quickly stop to direct traffic and come to her aid.

The victim’s daughter later took to Facebook to share that her mother has been taken to Penang General Hospital.

She revealed that her mum’s condition is quite serious as she broke her right shoulder, left hand, and two ribs. As for her younger sister, who was the other person on the motorcycle, she is a bit traumatised but otherwise fine.

The incident quickly sparked anger from netizens, including the person who uploaded the video.

According to Sin Chew Daily, OP claimed that his vehicle has also been hit by coconuts falling from the same tree.

Raising concerns over the safety of road users, he urged authorities to just cut down the trees.

On Monday (27 Jun), Bayan Lepas assemblyman Azrul Mahathir Aziz shared a statement on Facebook saying that he rushed to the scene as soon as he heard about the accident.

He requested the relevant agencies to take action and recommended that 12 trees be cut down immediately.

In an earlier post on Sunday (26 Jun), Mr Azrul noted that most of the trees along that road belong to private owners and that other trees that were potentially a danger to road users had been cut down.

He added that he has reached out to the children of the victim, whom he identified as Madam Anita.

A relief that authorities are taking action

Most of the time, the only thing we have to worry about falling from the sky and hitting us or our vehicles is bird poop.

However, this is a stark reminder that freak accidents, no matter how rare, can still strike at any time, and in the most unexpected ways.

We’re glad that the relevant authorities are taking prompt action to prevent more of such horrifying incidents from occurring.

In the meantime, MS News wishes the victim a smooth and swift recovery.