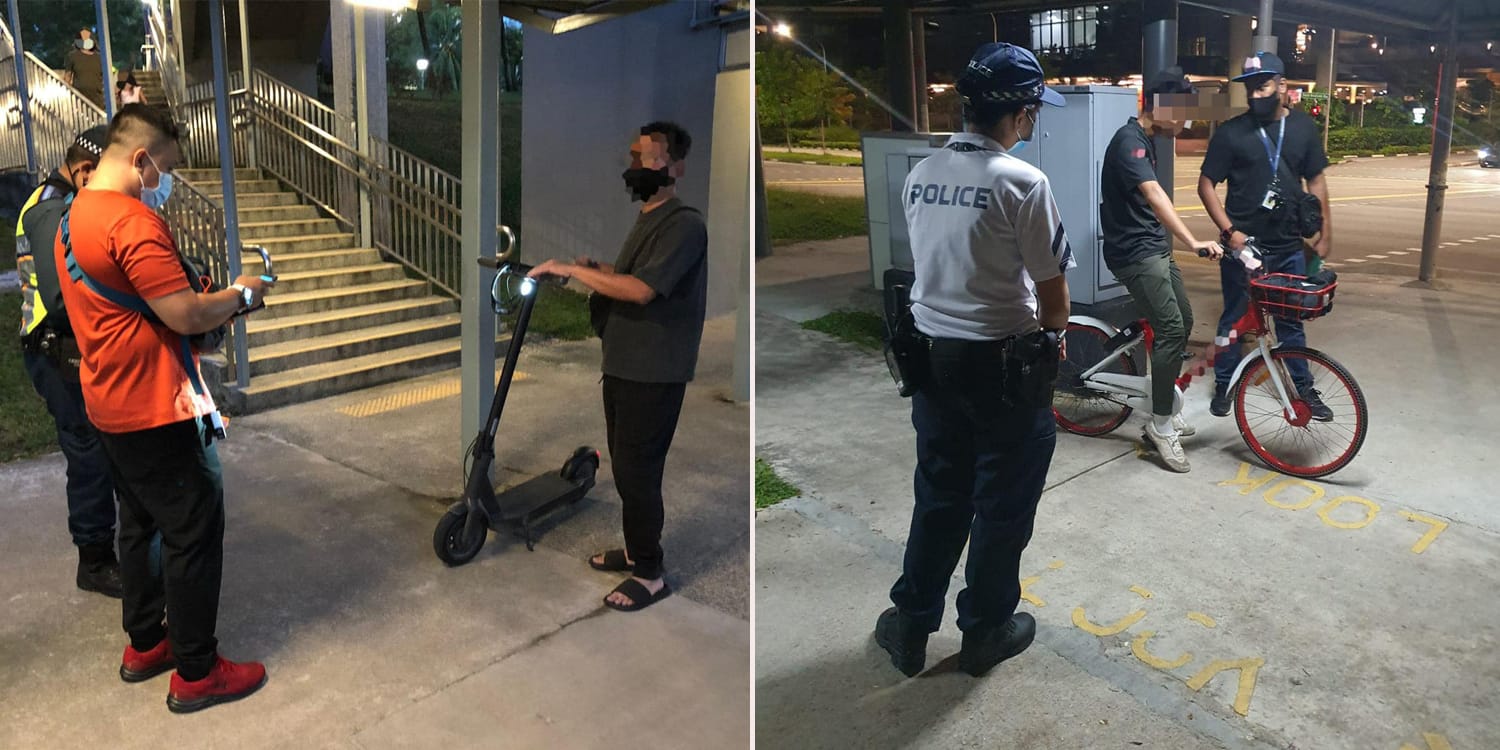 Only non-motorised devices are allowed on footpaths.

These days, most pedestrians have grown accustomed to sharing our pavements, sidewalks and footpaths with cyclists by keeping to the left.

But some riders of personal mobility devices (PMDs), power-assisted bicycles (PABs), and even motorcycles still ride on footpaths, which is illegal.

On Saturday (4 Jun), the Land Transport Authority (LTA) said in a Facebook post that its enforcement officers have taken errant riders to task during a patrol the night before. 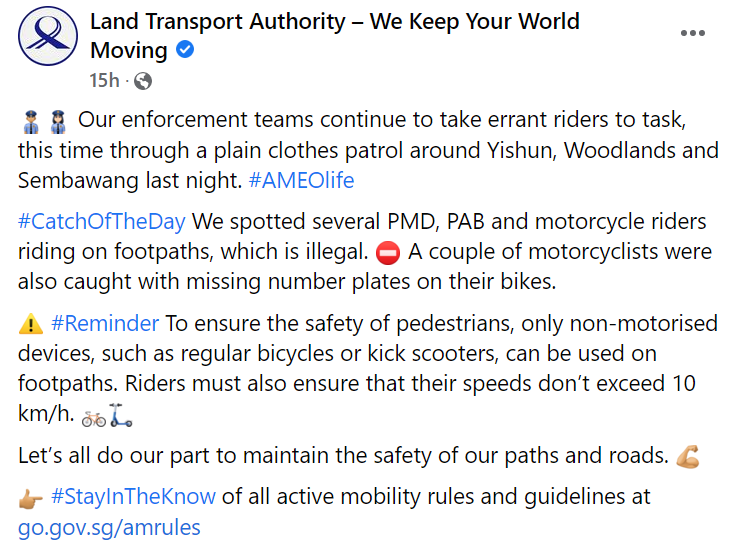 It reminded everyone that only non-motorised devices, such as regular bicycles or kick scooters, can be used on footpaths.

According to LTA, plainclothes officers from its enforcement teams conducted a patrol around Yishun, Sembawang and Woodlands on Friday (3 Jun) night. They caught several motorcyclists, as well as PMD and PAB riders, travelling along footpaths, which is against the law.

Some were also caught with missing number plates on their bikes. 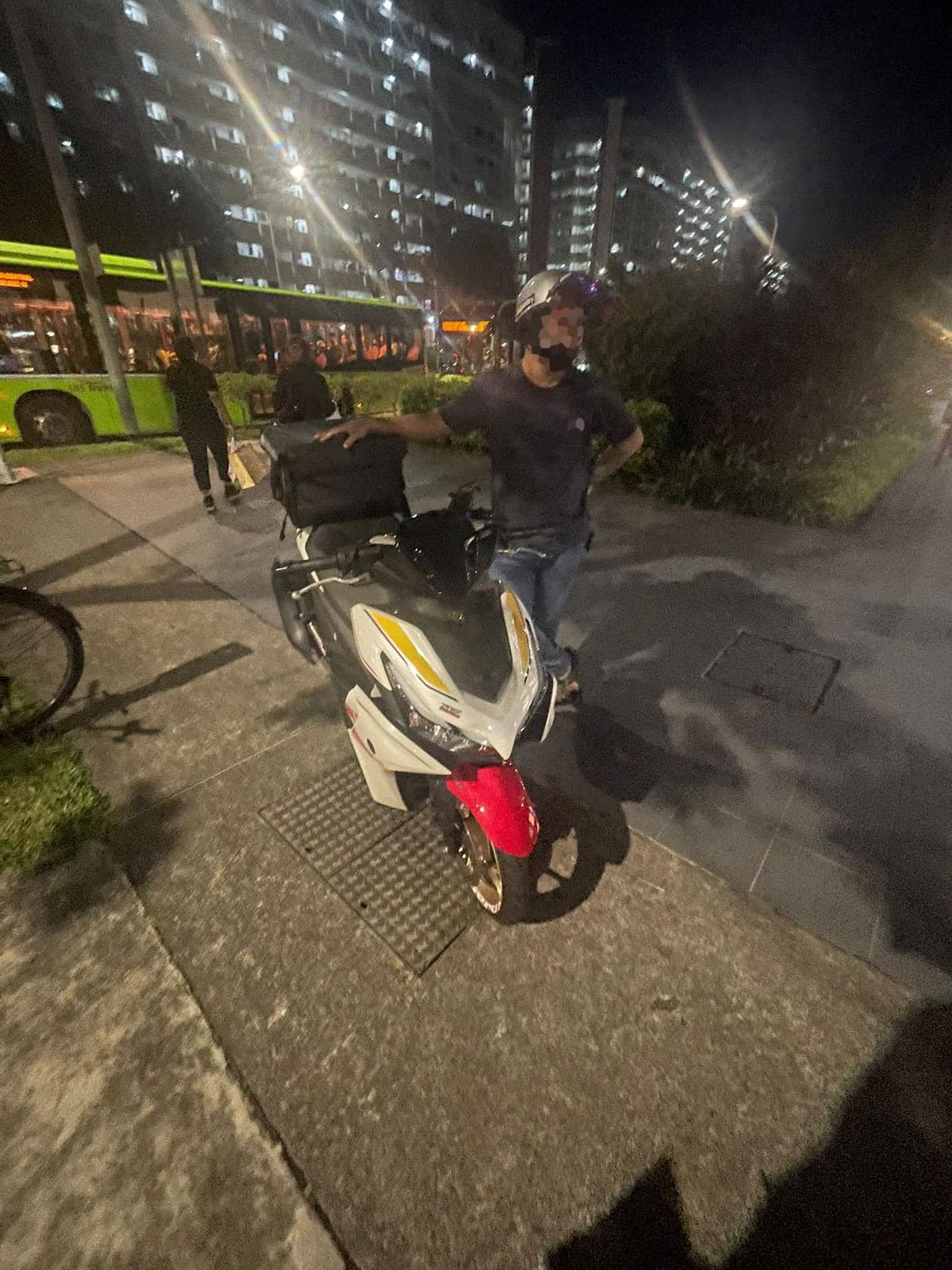 It reiterated that only non-motorised devices, such as ordinary bicycles or kick scooters, are allowed on footpaths for the safety of pedestrians.

Riders must also ensure their speeds do not go beyond 10km/h.

This was not the first time LTA has conducted similar operations, which seem to be taking place more frequently. On Sunday (29 May), it held a targeted operation at Yishun Dam.

It also collaborated with the Singapore Police Force to conduct spot checks on motorists in a 16-hour operation on 21 May.

Many netizens were glad that such checks and patrols were taking place.

One netizen hoped more would be done to catch the “Tour de France wannabes”.

Another pointed out that some delivery riders do not turn on their lights at night, which may cause accidents.

Many netizens also gave recommendations on where LTA’s officers should head next for their enforcement patrols and operations. 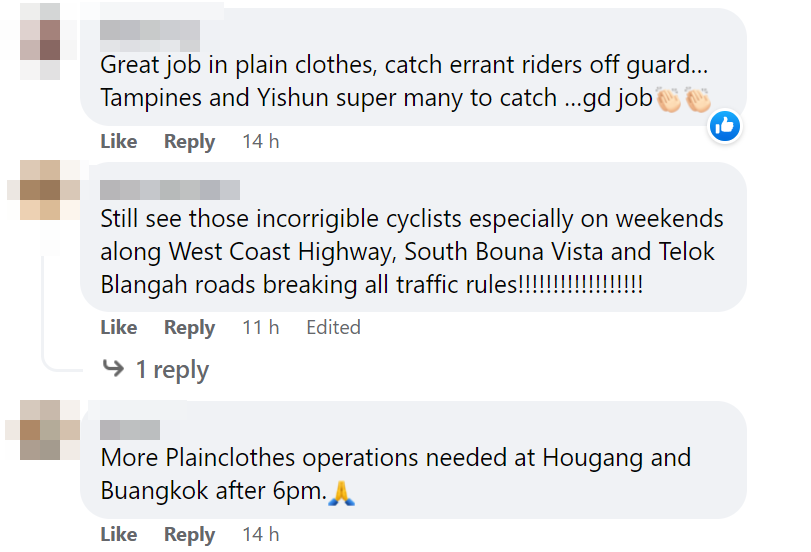 According to the Active Mobility Act (AMA), implemented in May 2018, various types of devices are not allowed on public footpaths for the safety of pedestrians.

Offenders caught doing so may be fined up to S$2,000 or jailed for up to three months.

Those who break any of the rules under the act may be prosecuted. LTA may send notices to attend court to offenders who violate the act.

Some examples of active mobility devices governed under the act are:

Here’s a guide to travelling along different paths according to device types. 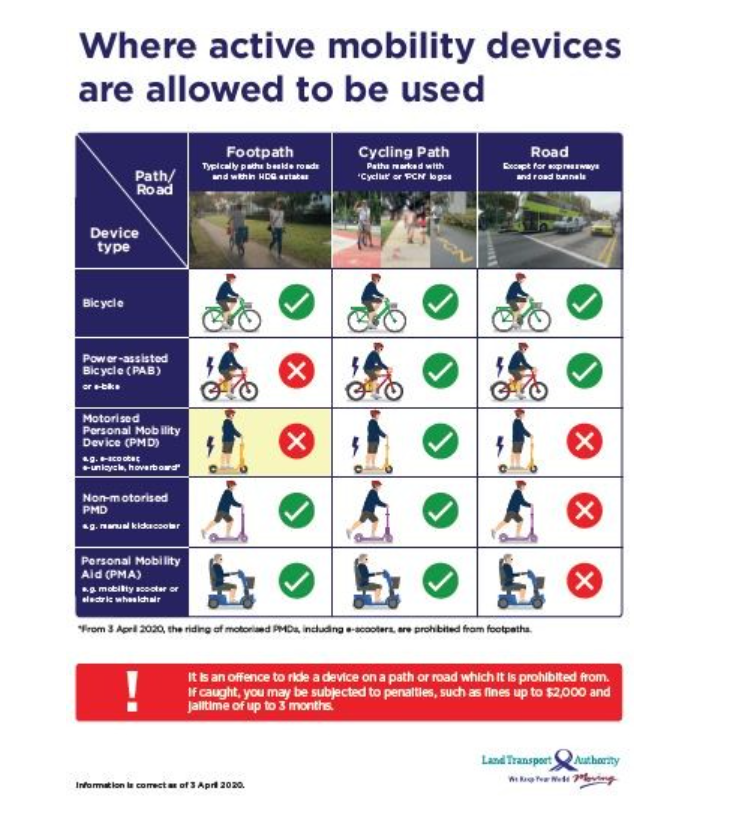 Anyone who uses a public footpath must have experienced how alarming it is when a PMD or PAB zooms past without warning.

PMD and PAB users are not allowed on public footpaths for everyone’s safety, especially those whose reflexes tend to be slower or who are not so quick on their feet.

So they should follow LTA’s regulations and not endanger anyone with their actions by keeping off footpaths.

We applaud LTA for its enforcement operations and hope its officers conduct more patrols soon.