Couple Appear To Have Dispute With SDAs, Behave Threateningly

Amid the ongoing pandemic, most Singaporeans know by now that certain safety measures apply when in public – like wearing your mask properly.

Since last year, Safe Distancing Ambassadors (SDA) have been hired to ensure these rules are being followed.

However, they sometimes face resistance from members of the public that can get quite nasty.

One woman may have taken this to the extreme by allegedly reaching out and pulling down an SDA’s mask outside the Marina Bay Sands (MBS). A police report has been filed over the incident.

Couple have apparent confrontation with SDAs

The woman in question, who was in a white dress, and a Caucasian male counterpart were seen in a video posted on the Singapore Incidents Instagram channel.

They were having an apparent confrontation with 2 SDAs – easily identified by their red shirts – while a 3rd SDA stood nearby. 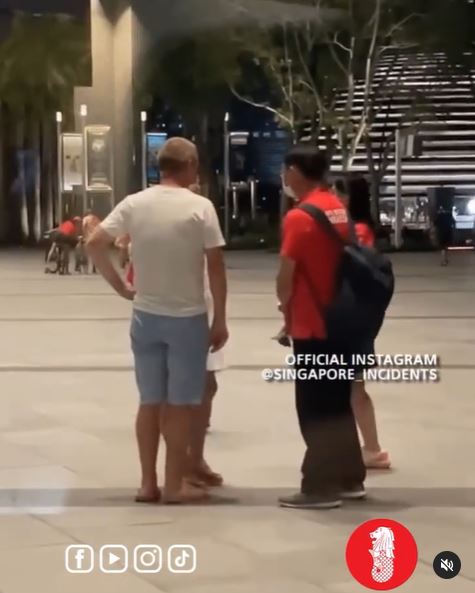 At one point, the man advanced and gestured threateningly towards the SDAs, and had to be pulled back by the woman. 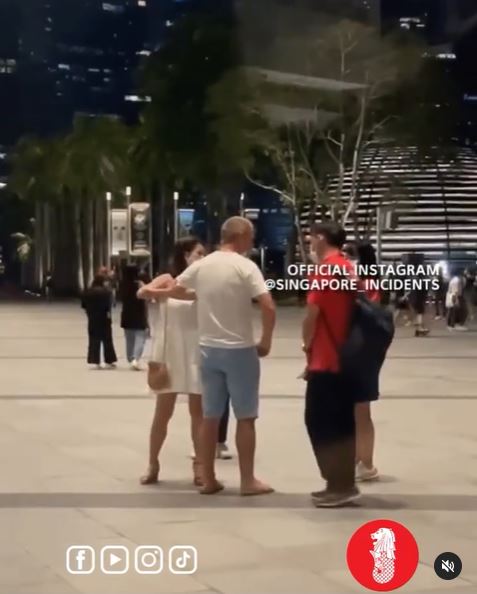 Woman wore her mask below mouth

While it isn’t apparent from the video what caused the dispute, it could have been about a possible flouting of safe distancing measures.

After the woman appeared to pull down the female SDA’s mask, the male SDA stepped in and it could be seen that that the woman herself was wearing her mask below her mouth. 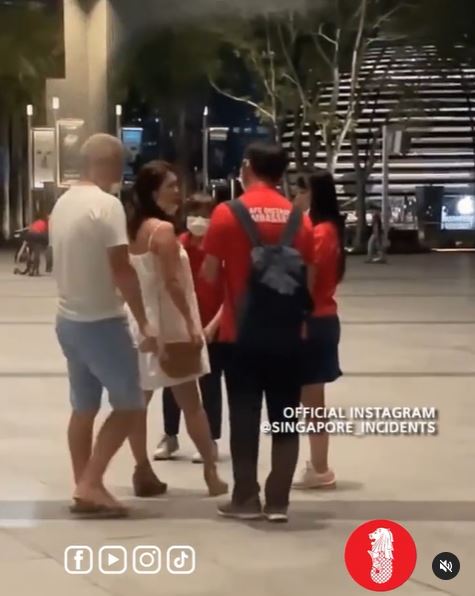 In another clip, the woman in white could be seen walking towards the male SDA, arms akimbo, as if she’s daring him on.

She causes him to step backwards repeatedly so as to a keep a distance from her. 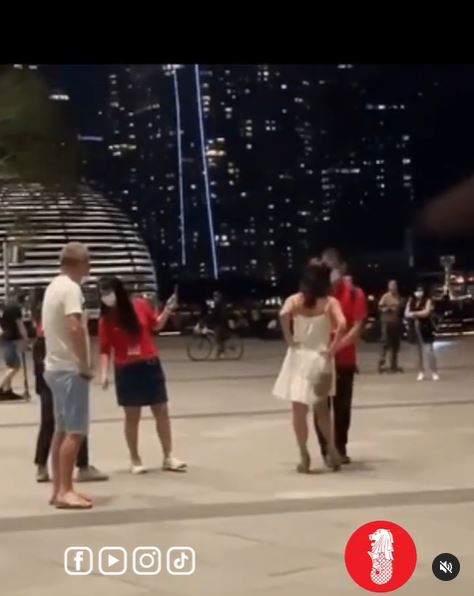 Her male counterpart and the 2 other SDAs look on.

In a subsequent clip, the woman tries the same thing on the female SDA – the one whose mask was pulled down by her. Another female SDA follows them.

She chases her all the way to the central fountain, causing the SDA to back up towards it. 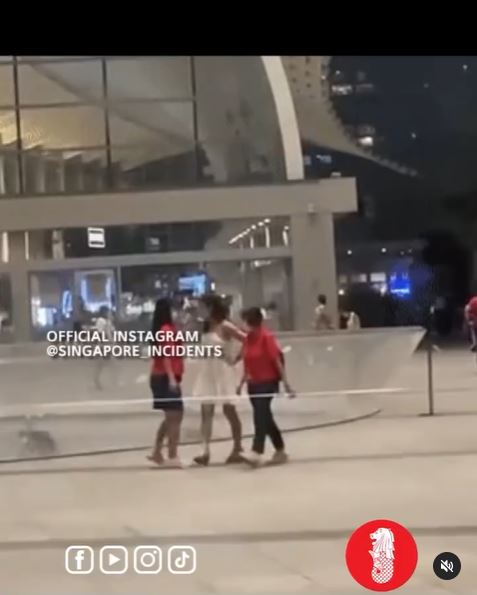 Those who’ve seen the videos might be wondering what caused the incident in the 1st place.

The Singapore Tourism Board (STB) has revealed that it started when an F&B establishment called for the SDAs’ help.

A group of customers there allegedly refused to stop drinking alcohol by 10.30pm, STB told The New Paper (TNP). 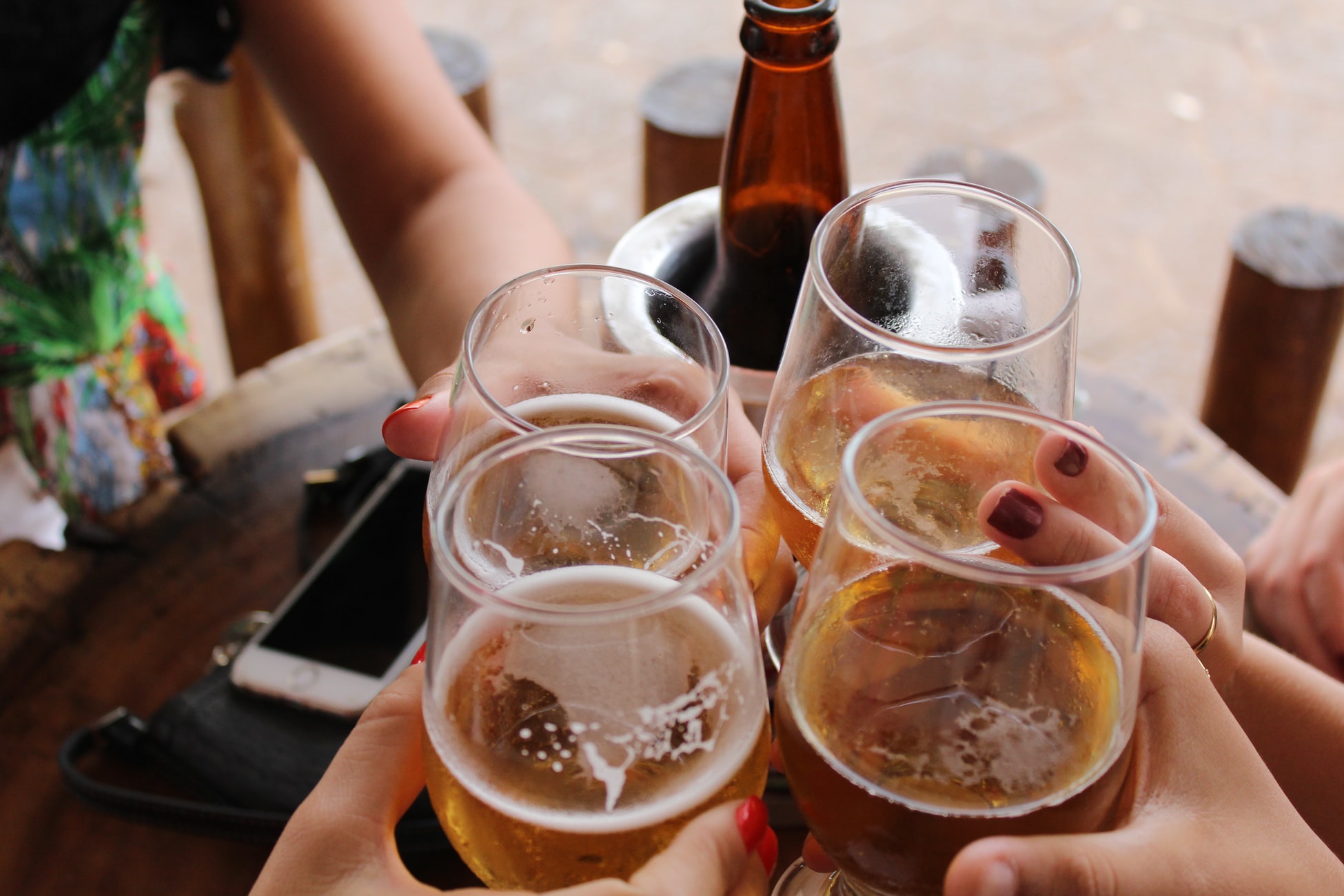 This is despite being repeatedly advised to stop by the F&B outlet and SDAs, STB added.

Perhaps they were new to Singapore, as most people here might know by now that consuming alcohol after 10.30pm isn’t allowed at F&B establishments under the Covid-19 (Temporary Measures) Act 2020.

Some allegedly confronted SDAs outside

According to the STB, what was caught on video was an extension of the incident in the F&B outlet.

Part of the group of recalcitrant customers allegedly followed the SDAs outside and confronted them.

During this face-off, 1 of them allegedly pulled down an SDA’s mask.

A police report has been made over the incident, and investigations are in progress, the STB said.

The statutory board also urged the public to cooperate with SDAs and comply with their instructions.

They take “a serious view” of abuse against them, and won’t hesitate to take “firm action” against offenders.

SDAs’ jobs are to make sure people follow the law, which in turn exists to keep us safe from Covid-19.

Those who’ve a problem with the rules shouldn’t take it out on them, as they’re just doing their jobs.

And whatever one’s reasons are, getting physical should never be the way.

Hopefully, the alleged offenders will be dealt with soon.