Must Share News – Independent News For Singaporeans
Home News 5 Redhill Cats Were Abandoned In A Tiny Cage & Their Confused... 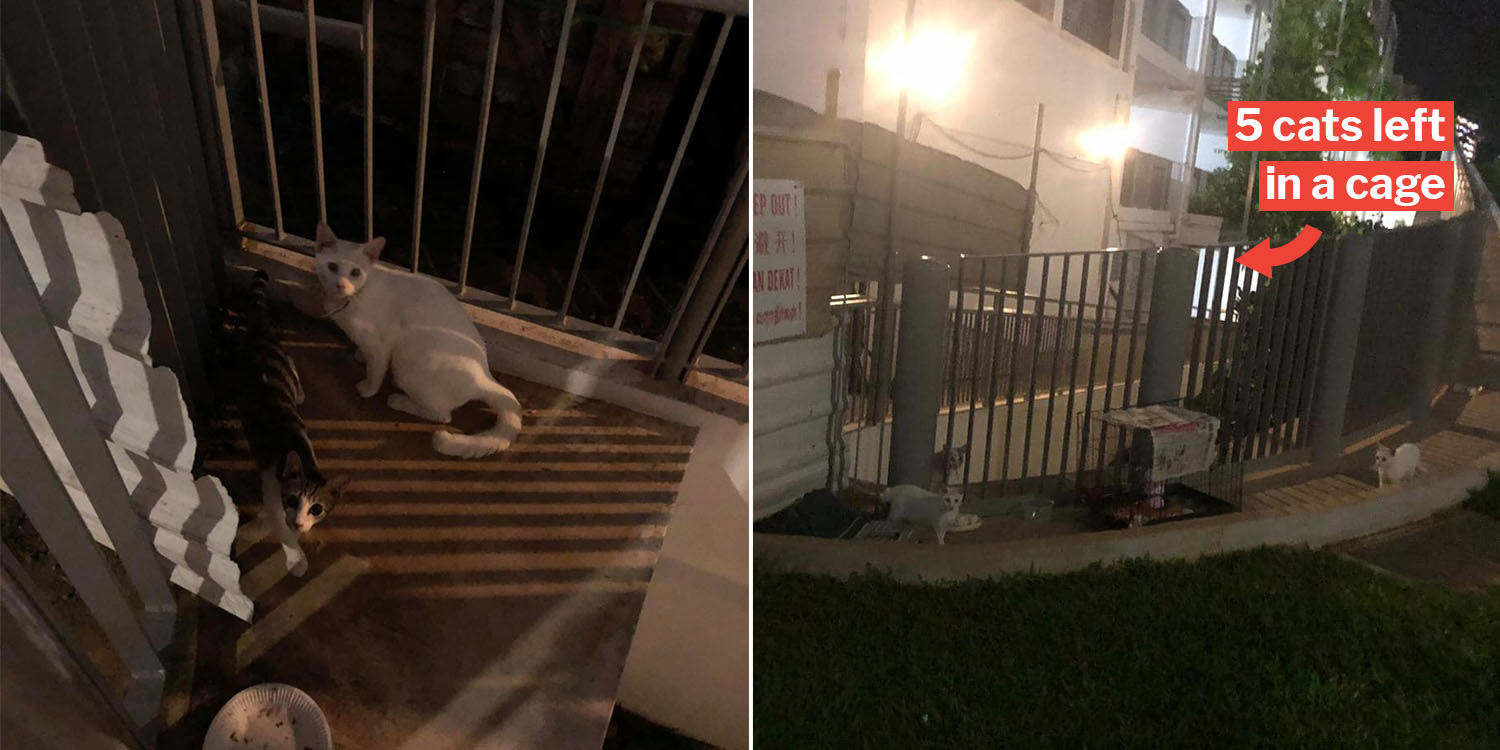 Redhill Cats Were Roaming Around The Cage When Found By Rescuers

A heartbreaking photo album has been circulating on social media and raising sound questions on responsible pet ownership in Singapore.

The collection of snapshots give us a glimpse into the plight of 5 Redhill cats who were left in a cage near Henderson 96B and 91 on Sunday night (26 May). 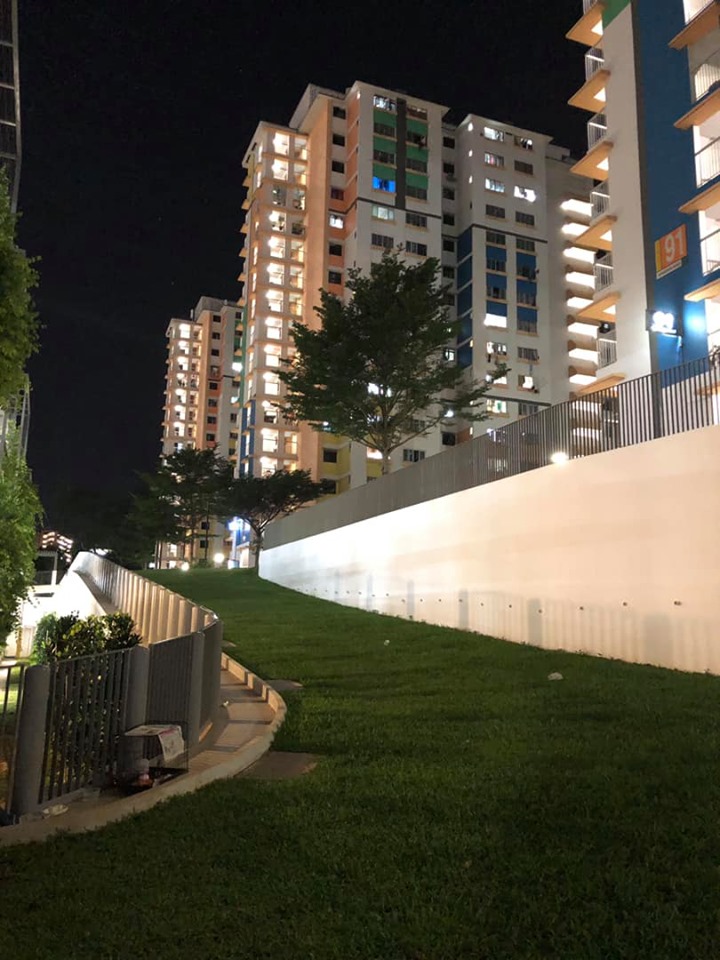 Here’s the appeal in the Facebook group named Cats of Redhill. 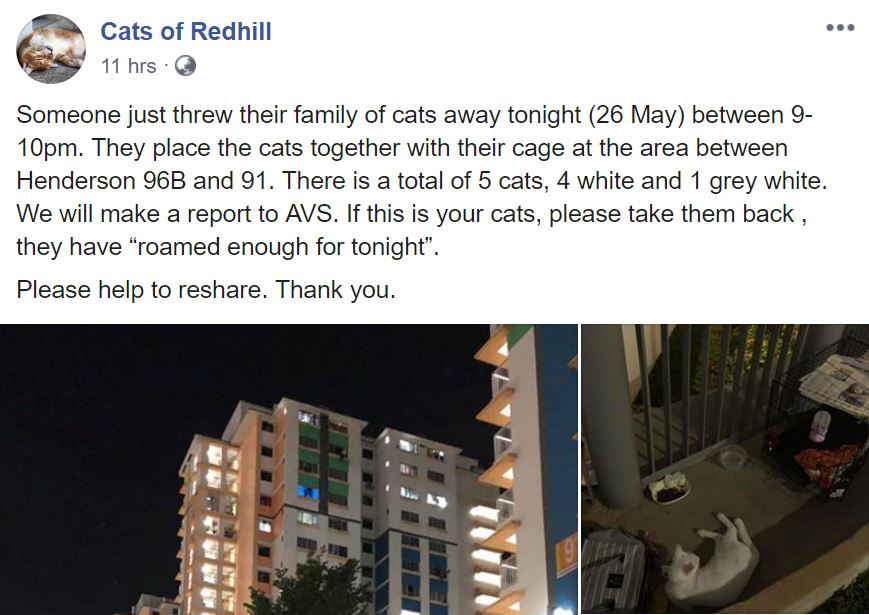 A family of cats “thrown away” in a cage

The netizen described stumbling upon a confusing scene when walking around the “area between Henderson 96B and 91”. 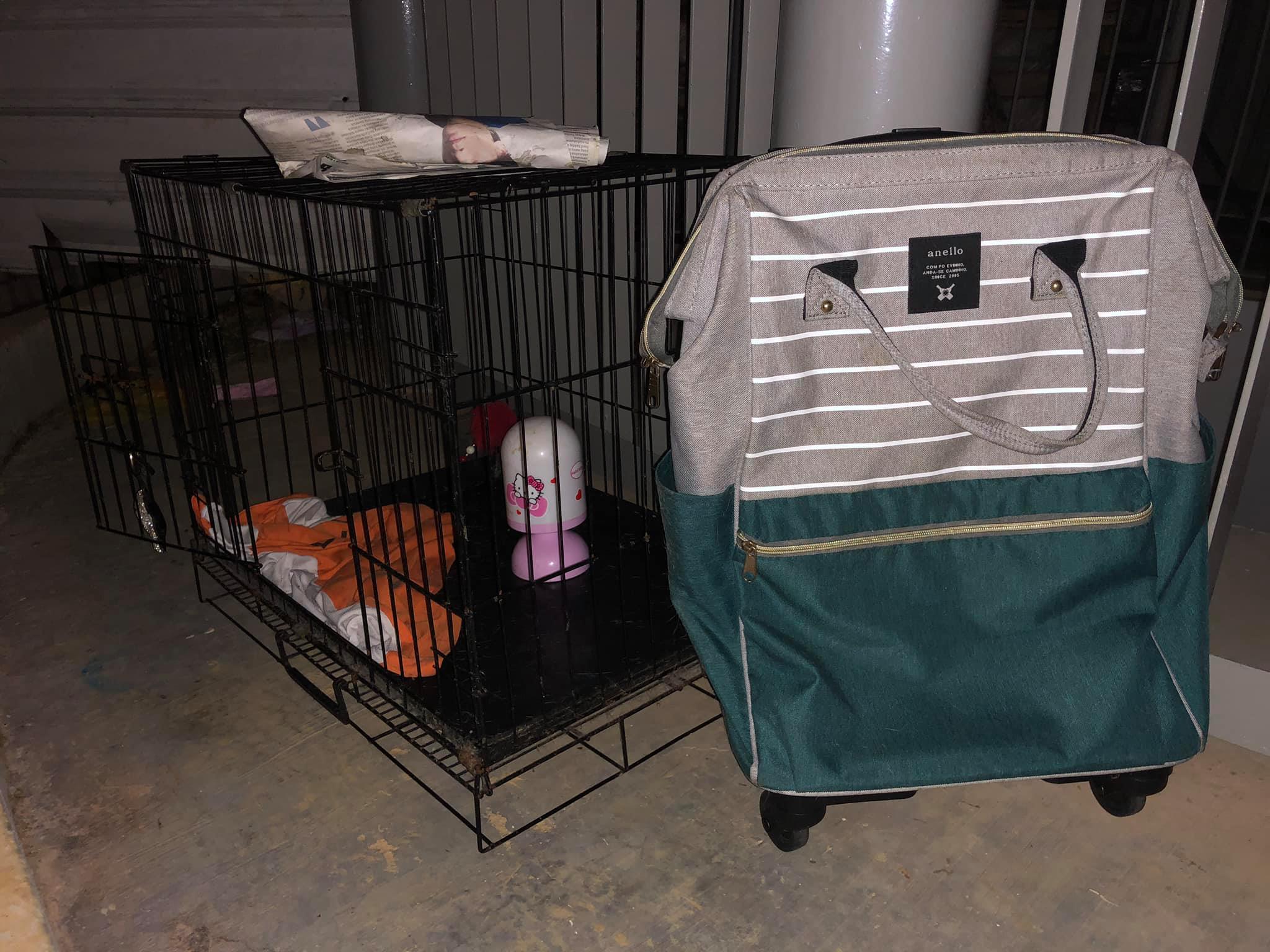 A tiny cage which was housing 5 cats in total was left near a site that appears to be under construction. The 4 cats were mainly white, while one had a grey coloration that resembled a common Tabby pattern. The team at Cats of Redhill surmise that the cats had been abandoned and left to fend for themselves.

Confused Redhill cats left to fend for themselves

Judging by the state of their cages – with Hello Kitty water bottles & feeding trays – the 5 cats were probably domesticated and kept as house pets. 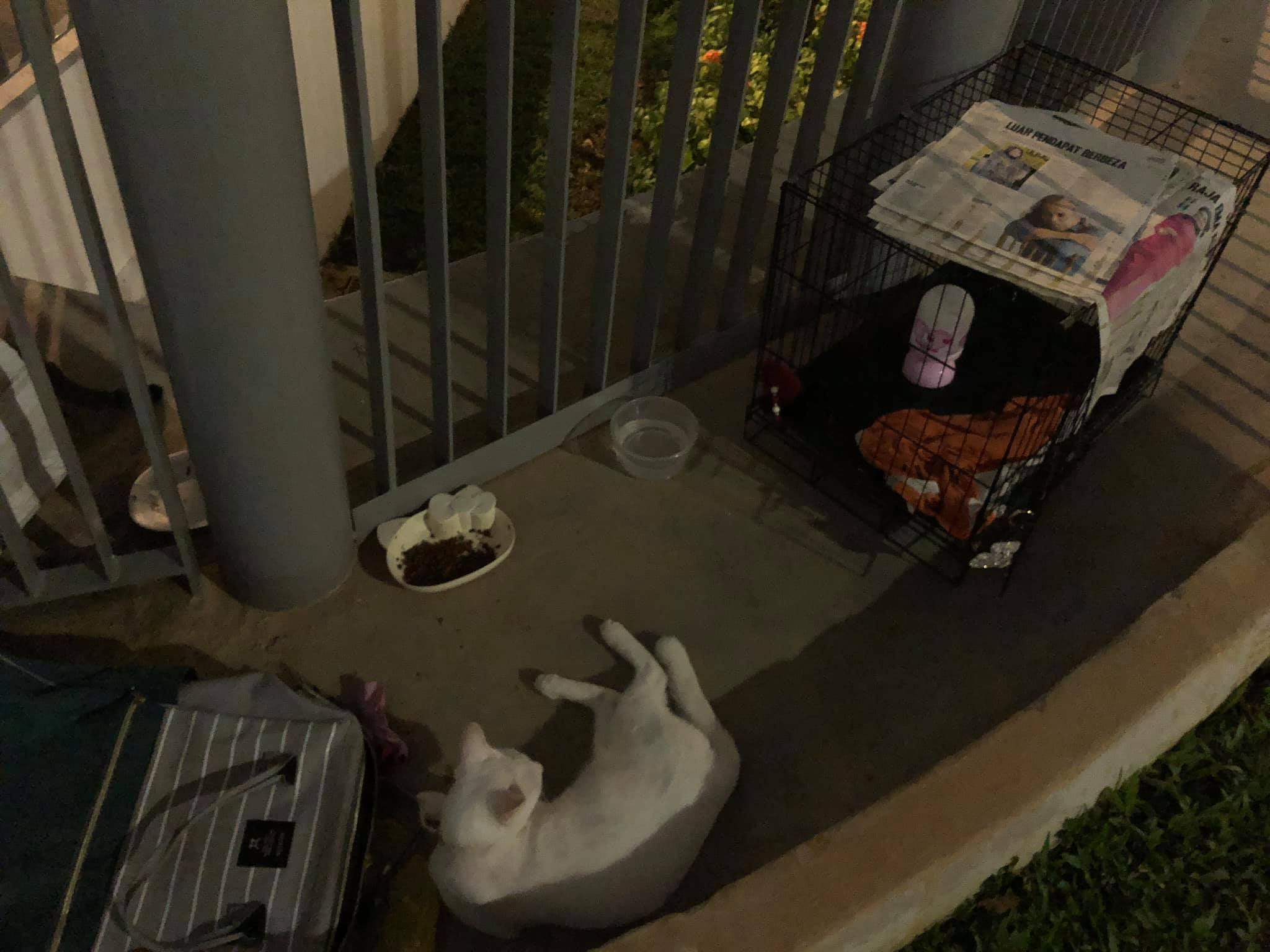 By the time rescuers had located them, the confused kitties had been wandering up and down the sidewalk — clearly at a loss as to what to do next. 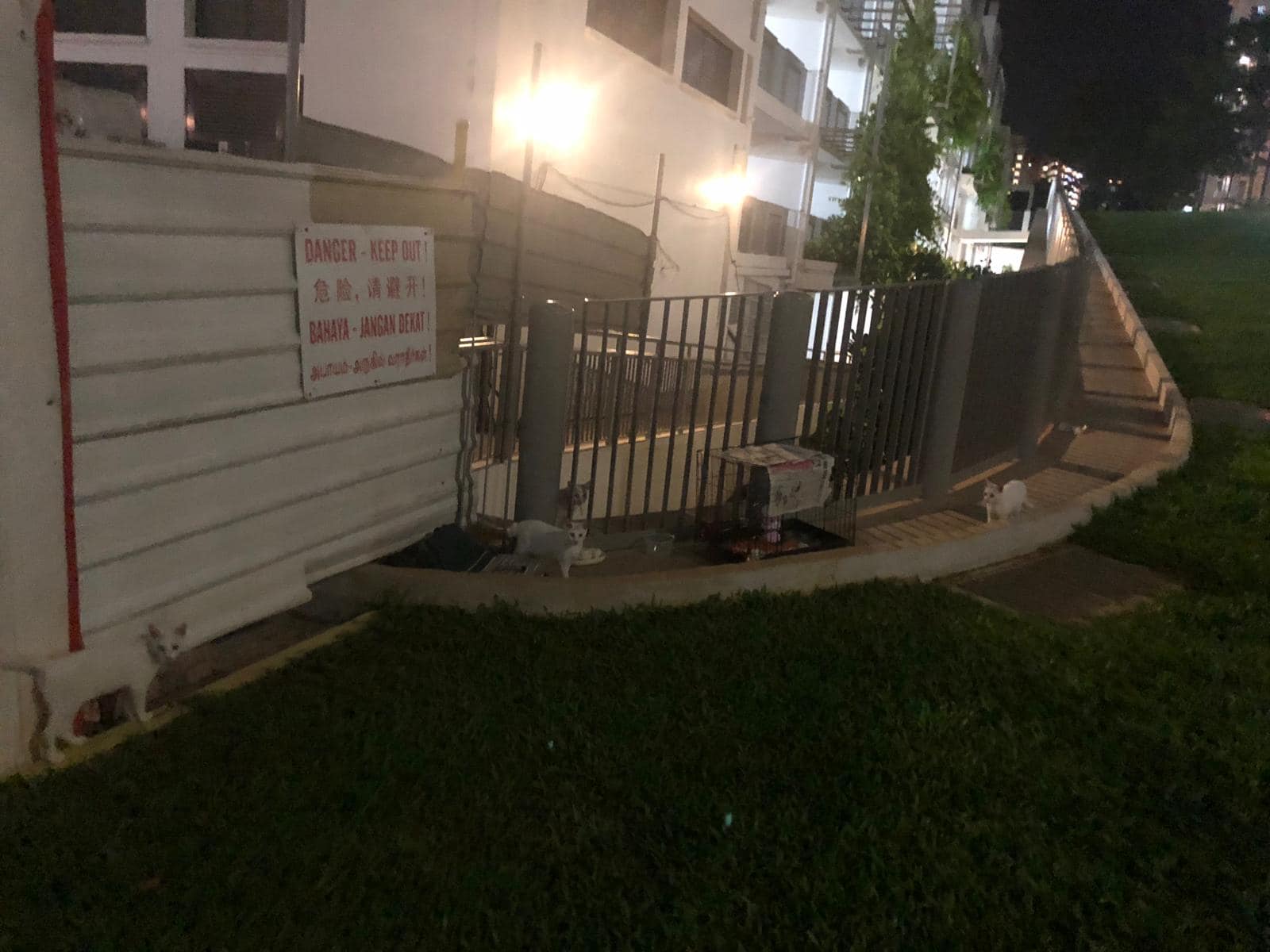 A report has been made

The post ends with a plea for the original owners of the Redhill cats to come forth and take responsibility for their actions.

A report has also been made to the Animal & Veterinary Service (AVS), so the authorities can follow up on the case.

House cats aren’t equipped to survive in the wild, and pet owners should be well aware that they shouldn’t care for too many pets beyond their means.

To avoid surprise additions to your family, consider neuter or spay surgeries.

In any case, we hope this story serves as a fair warning to all potential pet owners that there are responsible ways to deal with a situation where we are unable to care for our pets.

Contacting the SPCA or animal welfare groups for assistance would be the wiser choice.

We have to ensure the survival of our fur-friends who were once our family members after all. At the very least, we owe them a fighting chance if we’re going to give them up.