Sengkang Town Council Will Manage All Sengkang Wards Directly From 2023

The 2020 General Election or GE2020 saw the formation of Sengkang Town Council (SKTC) following changes in town areas and boundaries.

Formed to manage Sengkang GRC, SKTC only had a direct purview of the Anchorvale division since Oct 2021, as other divisions were still under existing management services from their former GRCs.

But all that will be changing after Sengkang GRC posted a major announcement on Facebook yesterday (17 May). 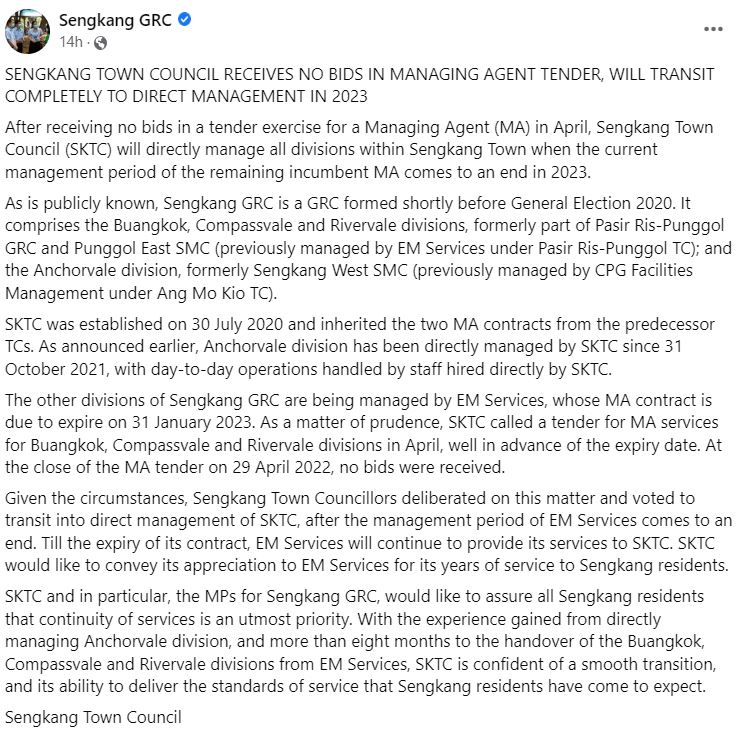 From 2023, SKTC will be managing all divisions in Sengkang Town directly after the Managing Agent (MA) EM Services’ contract ends. This follows a three-week tender exercise in Apr that apparently drew no bids.

SKTC is currently only managing Anchorvale directly after its contract with CPG Facilities ended in Oct 2021. Meanwhile, EM Services has been handling other divisions in Sengkang Town, including:

EM Services has been managing these divisions since they were part of Pasir-Ris Punggol GRC and Punggol East SMC, before GE2020.

But with its contract due to expire soon, SKTC decided to call for a tender for MA services “[a]s a matter of prudence”.

Unfortunately, they received no bids at the close of the tender on 29 Apr, which prompted the council to decide on directly managing SKTC instead.

Since EM Services’ MA contract won’t expire till 31 Jan 2023, SKTC still has about eight months before officially taking over their duties.

Once that happens, the town council will be managing the Buangkok, Compassvale, and Rivervale divisions, along with Anchorvale, directly.

But till then, EM Services will continue fulfilling its duties. In light of the impending changes, SKTC expressed its gratitude towards EM Services for its “years of service to Sengkang residents”.

As for residents, the council assured them that continuity of services is an utmost priority. They’re thus “confident of a smooth transition” and guarantee their “ability to deliver standards of service that Sengkang residents have come to expect.”

Looking forward to a new start with Sengkang Town Council

There might well be a few teething problems when changes occur and new management takes over.

However, we are confident that SKTC will do a good job in managing Sengkang Town, given what has been achieved in Anchorvale so far.

We hope that Sengkang residents will be patient during the transition period until things have stabilised.

May SKTC rise to the challenge, and continue serving the needs of Sengkang residents.