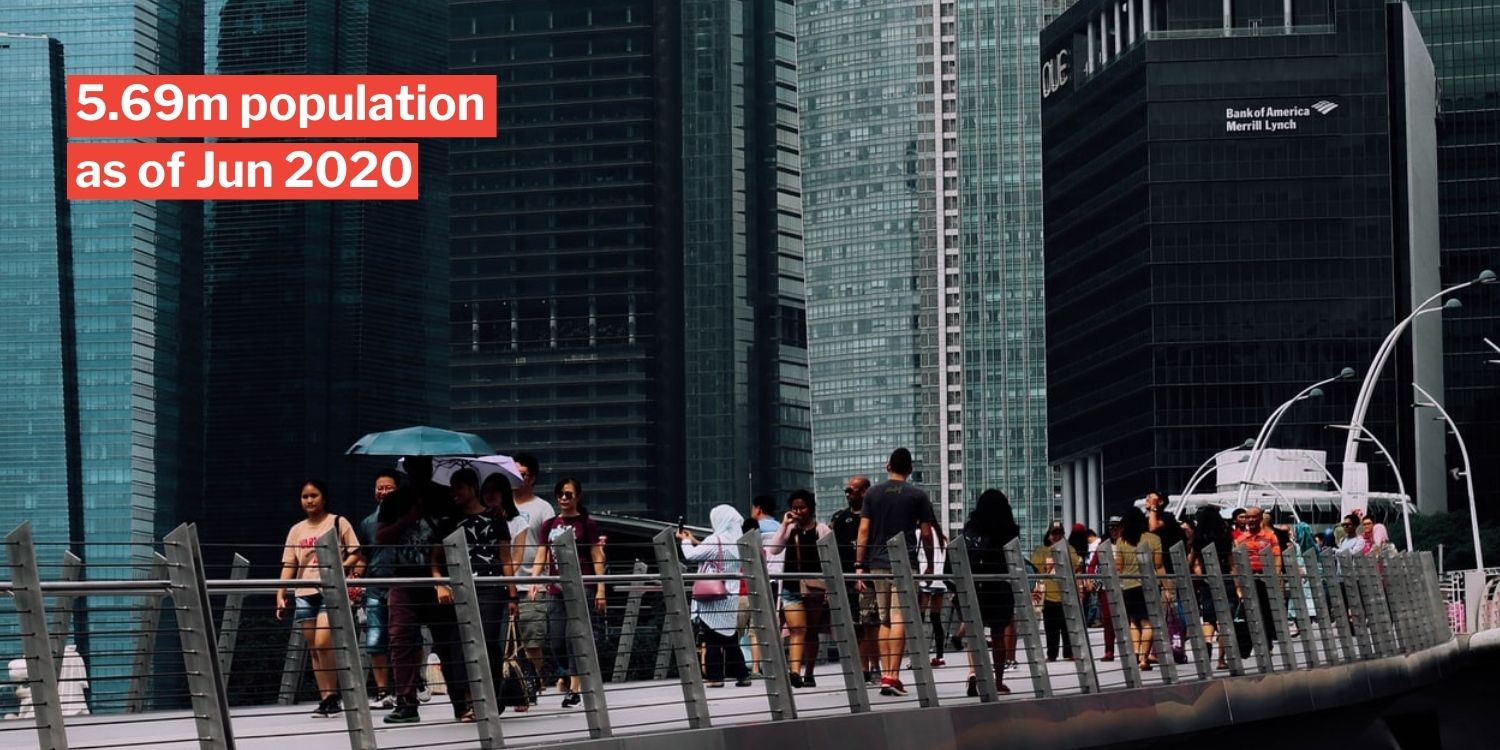 The number of non-residents decreased by 2.1%.

The Covid-19 pandemic has ravaged many economies around the world, and Singapore is no exception.

In order to keep themselves afloat, many companies have had to lay off workers, at the same time preserving a “Singaporean core“.

On Thursday (24 Sep), the National Population and Talent Division (NPTD) revealed that Singapore’s population had shrunk by 0.3% since last year to 5.69 million. 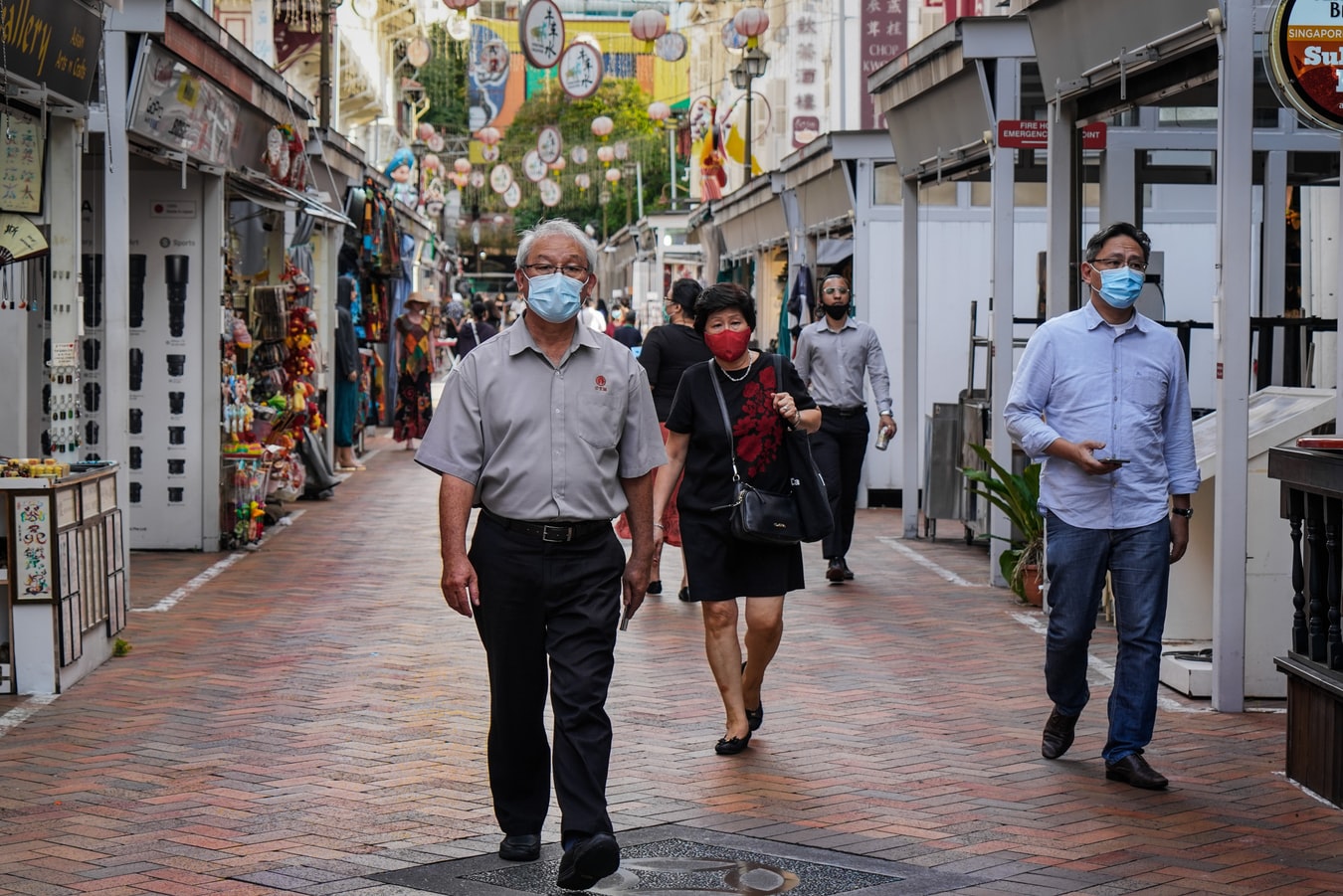 The decrease could be largely traced to a decrease in non-residents due to the challenges brought about by the Covid-19 pandemic, it said.

Number of non-residents drops by 2.1%

Accroding to NPTD’s Population In Brief 2020, Singapore’s population as of Jun 2020 comprised: 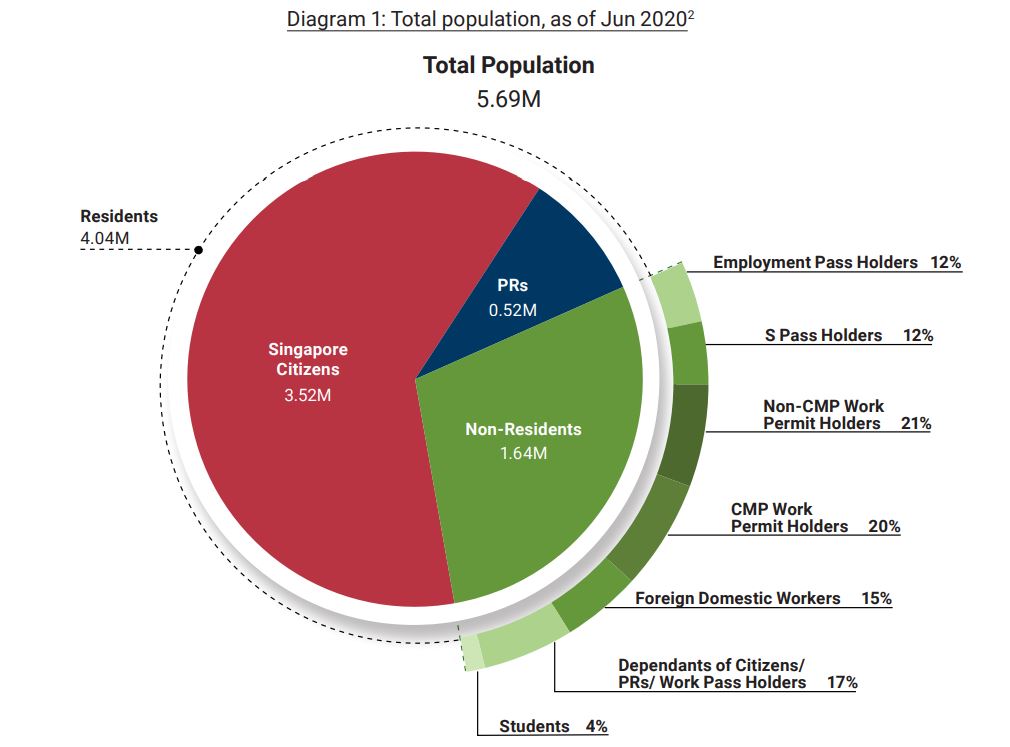 Though the number of Singapore citizens and PRs remained relatively unchanged, the same could not be said of the non-residents.

Over the 1-year period from Jun 2019 to Jun 2020, the number of non-residents decreased by 2.1%, with Work-Permit holders accounting for most of the slide.

The number of employment pass holders and S-pass holders also decreased from Dec 2019 to Jun 2020, according to Ministry of Manpower data.

The decrease was apparently a result of the Covid-19 pandemic, which brought about “weak demand and travel restrictions”.

NPTD’s figures show that this is the first time the overall population saw a decrease in the last decade. 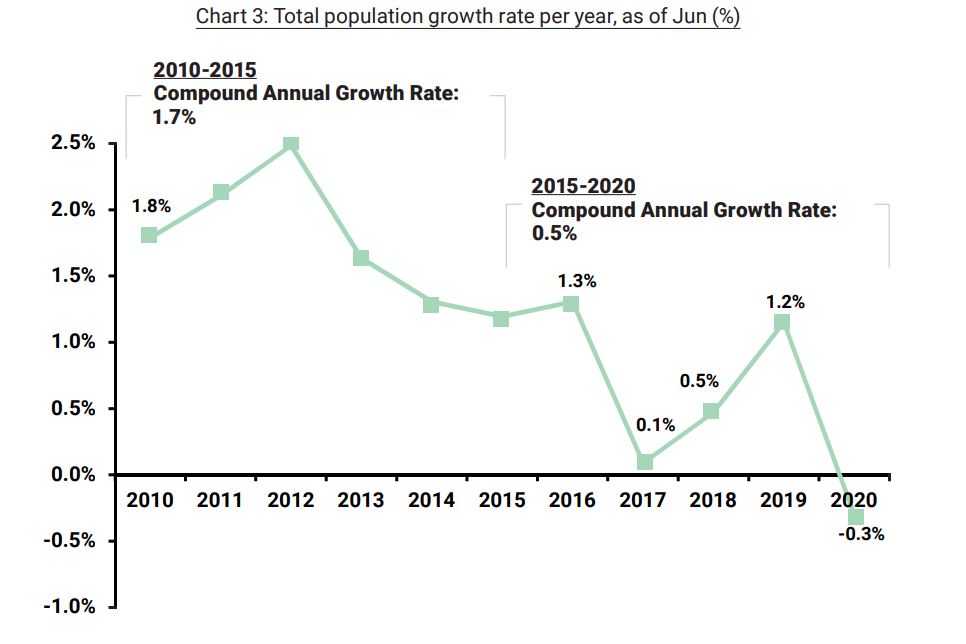 As widely reported, Singapore is facing an ageing population. In particular, the number of citizens aged 65 and above now accounts for 16.8% of the popular, compared with 16.0% in Jun 2019.

This proportion is expected to continue rising in the coming decade. By 2030, the cohort is projected to reach 23.7%. 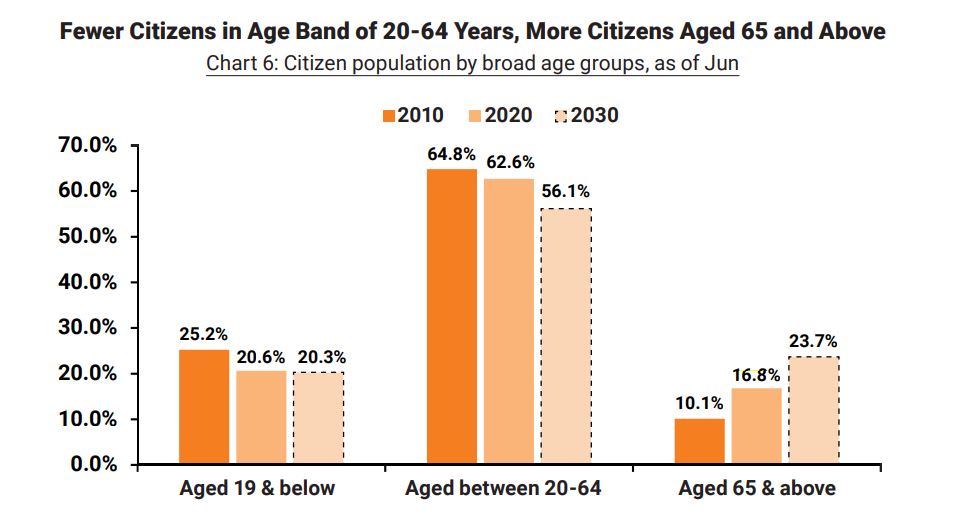 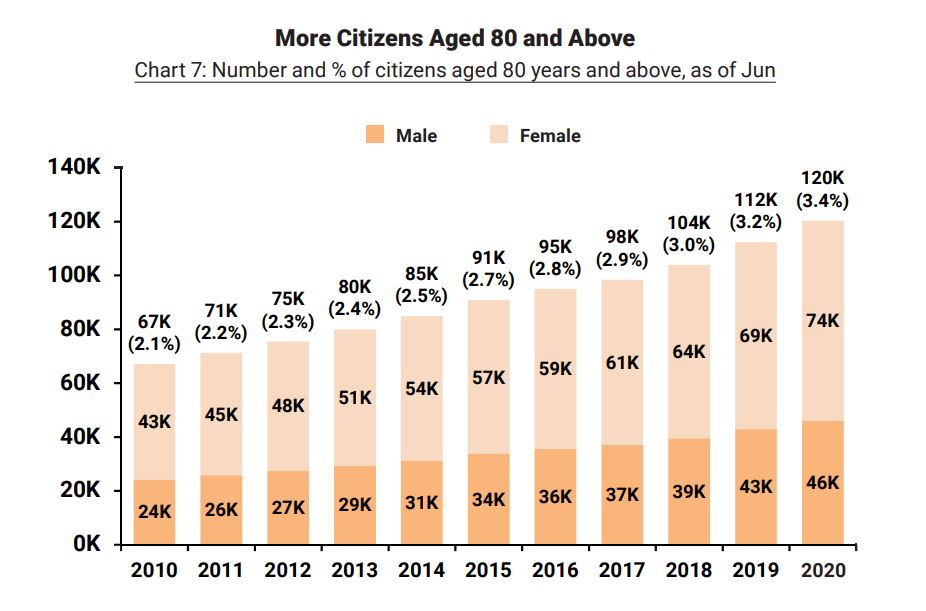 The number of individuals granted Singapore citizenship and PR status remained fairly stable, both increasing by about 200 respectively. 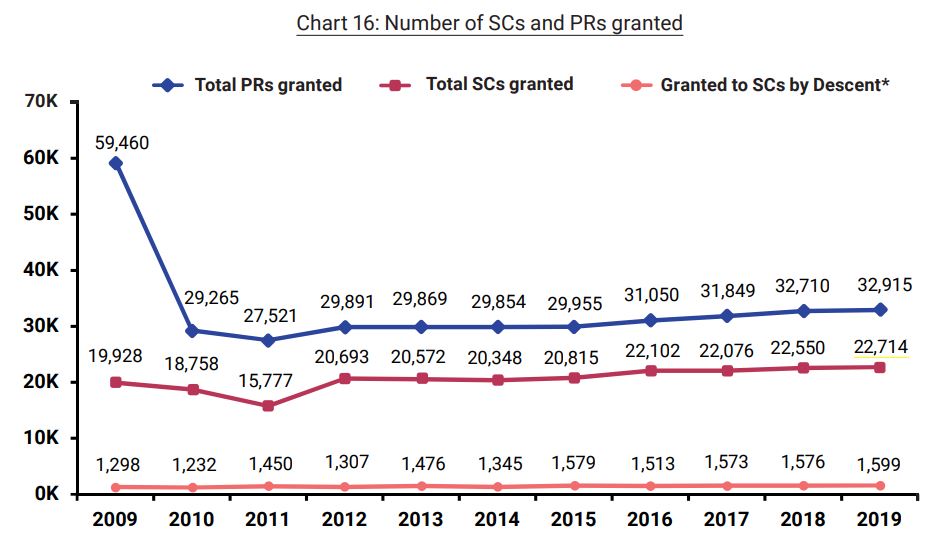 About 1,599, or 7% of those granted citizenship comprise children born overseas to Singaporean parents, AKA “citizens by descent”.

The number of new PRs is fairly consistent with the 30,000 applications approved yearly since 2009.

The Government will reportedly keep the rate of immigration “very stable” so Singapore continues to be a “cohesive society”, the report said. 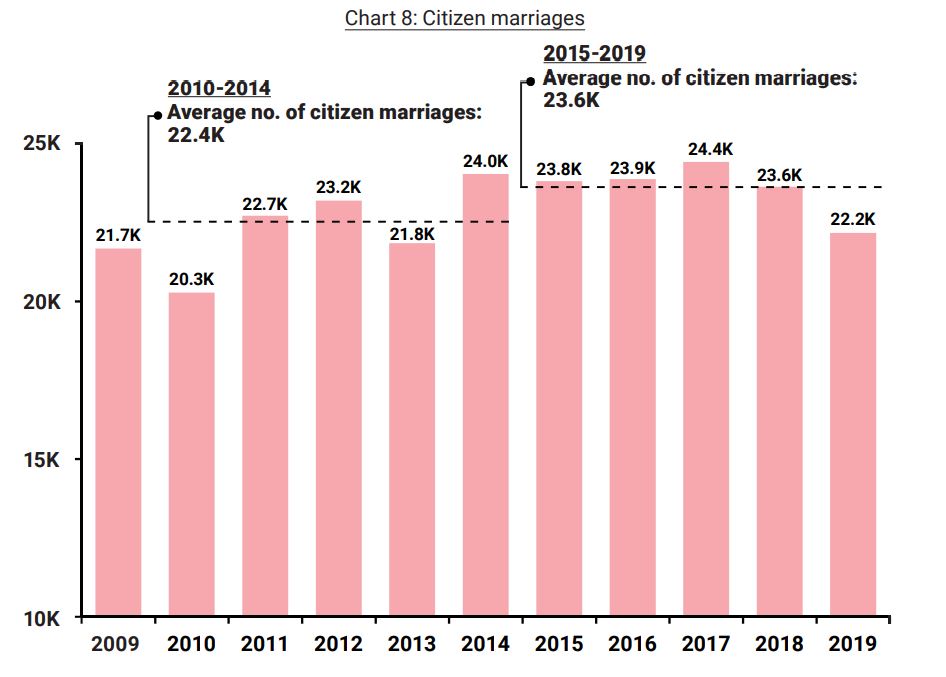 However, the average number of marriages over the past 5 years has increased compared with the same period before that.

The proportions of transnational and inter-ethnic marriages have also largely remained stable over the past 5 years.

You can check out the full report here.

An indication of the heavy blow Covid-19 has landed us

While there might not be dramatic shifts for many of our demographic figures this year, the unprecedented drop in the non-resident population is indicative of the heavy blow of the Covid-19 pandemic.

But with Covid-19 cases showing signs of improvement here, we’re confident that the “light at the end of the tunnel” is nigh.

Let’s hope we open up our travel restrictions and enter into Phase 3 soon.