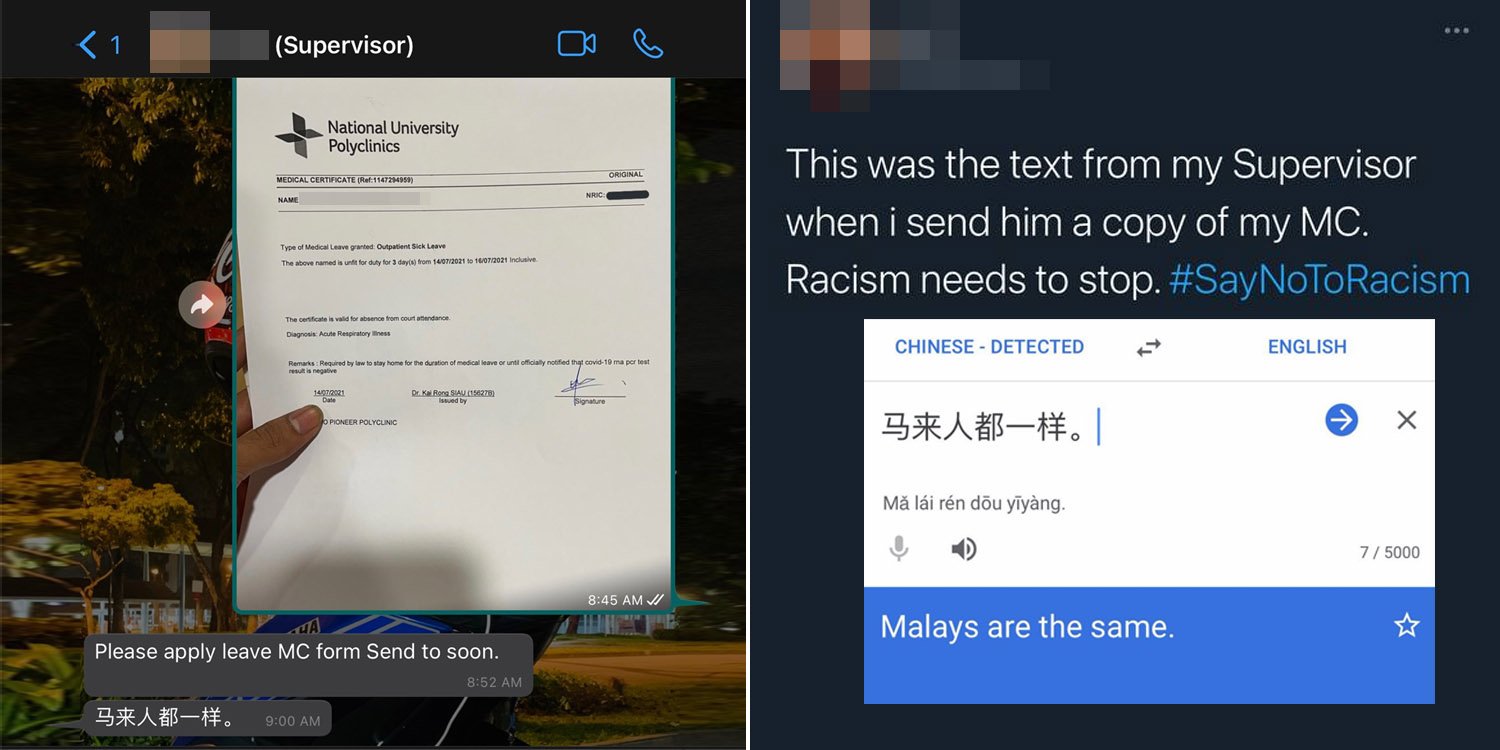 Over recent months, many instances of racist behaviour have come to the fore. From the gong-banging neighbour to the Ngee Ann Poly lecturer, these incidents have reminded us of the importance of respecting each other’s differences.

A man who was innocently submitting his medical certificate (MC) allegedly received an unprovoked racist remark from his supervisor. The company where both are employed is currently investigating the incident and said there’s no room for racism at the workplace.

Man submits MC to supervisor but gets racist reply

In a viral tweet on Wednesday (14 Jul), Twitter user @qayywm shared what appears to be a WhatsApp message thread with his supervisor. 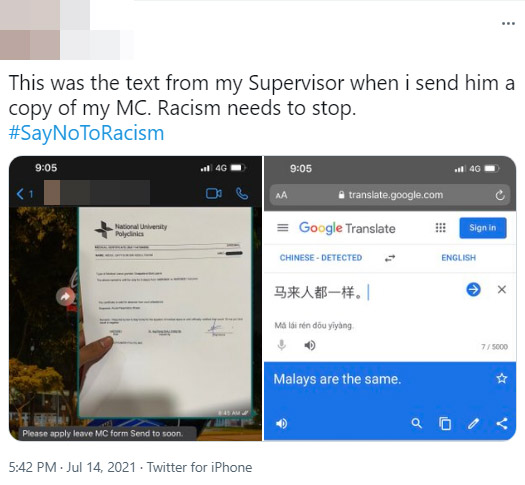 The user, whose name is Abdul Qayyum, had applied for MC from 14-16 Jul and submitted the document to his supervisor.

But instead of a message wishing him well, Qayyuum received a questionable text in Chinese which translates to,

All Malays are the same.

To stereotype members of a certain race is wrong enough, but sending it in a language that’s not commonly understood by the said community makes it worse.

Since then, countless netizens have reacted to the questionable message, calling the supervisor’s actions racist and discriminatory.

This netizen said that it was cowardly of the supervisor to send the message in a language that’s foreign to the intended party.

Another Twitter user urged Mr Qayyum to report the incident to the Ministry of Manpower (MOM) or other relevant agencies.

Since then, 9G Elevator, the company that Mr Qayyuum works for, has issued a response regarding the incident.

Speaking to Coconuts Singapore, the lift company said they’re aware of the case and are trying to gather information and investigate the incident ASAP.

They also shared their commitment to ensuring all staff “feel welcome, safe, and heard”. The company added that there’s no place for racism in 9G Elevator or any other workplace.

In response to queries from MS News, a Tripartite Alliance spokesperson said the comment in the screenshot was uncalled for and does not contribute to a workplace where employees feel safe.

The labour organisation has also reached out to Mr Qayyum and his employer for follow-up actions.

Troubling to hear of such racist incidents

It’s indeed disturbing that more of such racist incidents have surfaced over recent weeks and months.

That said, we’re glad that the company in question is taking a serious view of the case.

Indeed, such behaviour threatens to destroy our social fabric and has no place in a diverse country like Singapore.

We hope the company and the relevant agencies will conduct a thorough investigation into the matter and dish out punishments where necessary.