S’pore House With 80 Windows Still Has Lots Of Privacy, Seems Bigger Than It Really Is 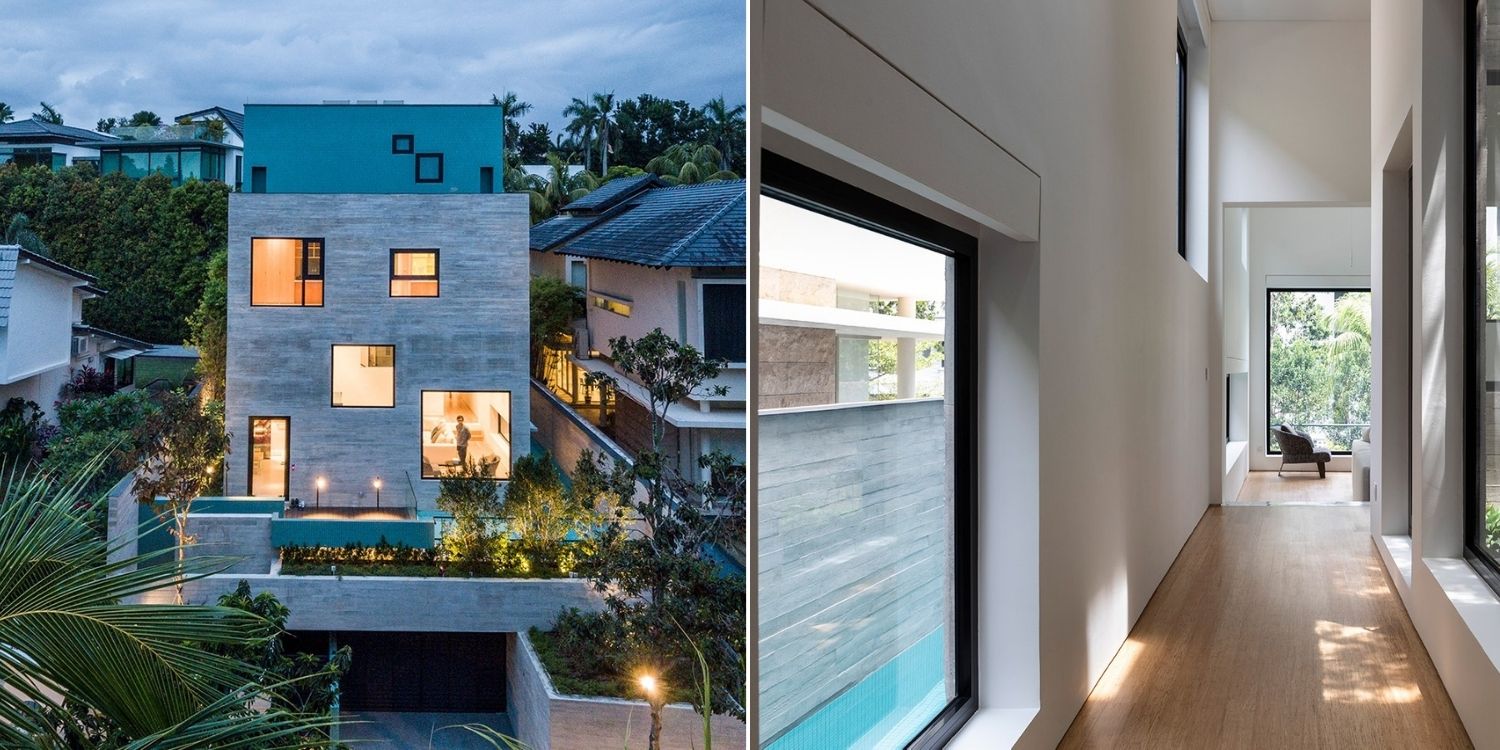 Every window gives a specific view.

S’pore House With 80 Windows Still Has Lots Of Privacy, Main Site Is Elevated From Street Level

Have you ever wished you can keep an eye on your child at all times, even when you’re not in the same room?

Well, the owners of this “Window House” in Singapore can, thanks to the numerous exterior and interior windows strategically placed throughout the premises.

The house has a total of 80 windows, but still maintains a degree of privacy from prying eyes, thanks to a cutting-edge design that includes an elevation from street level. 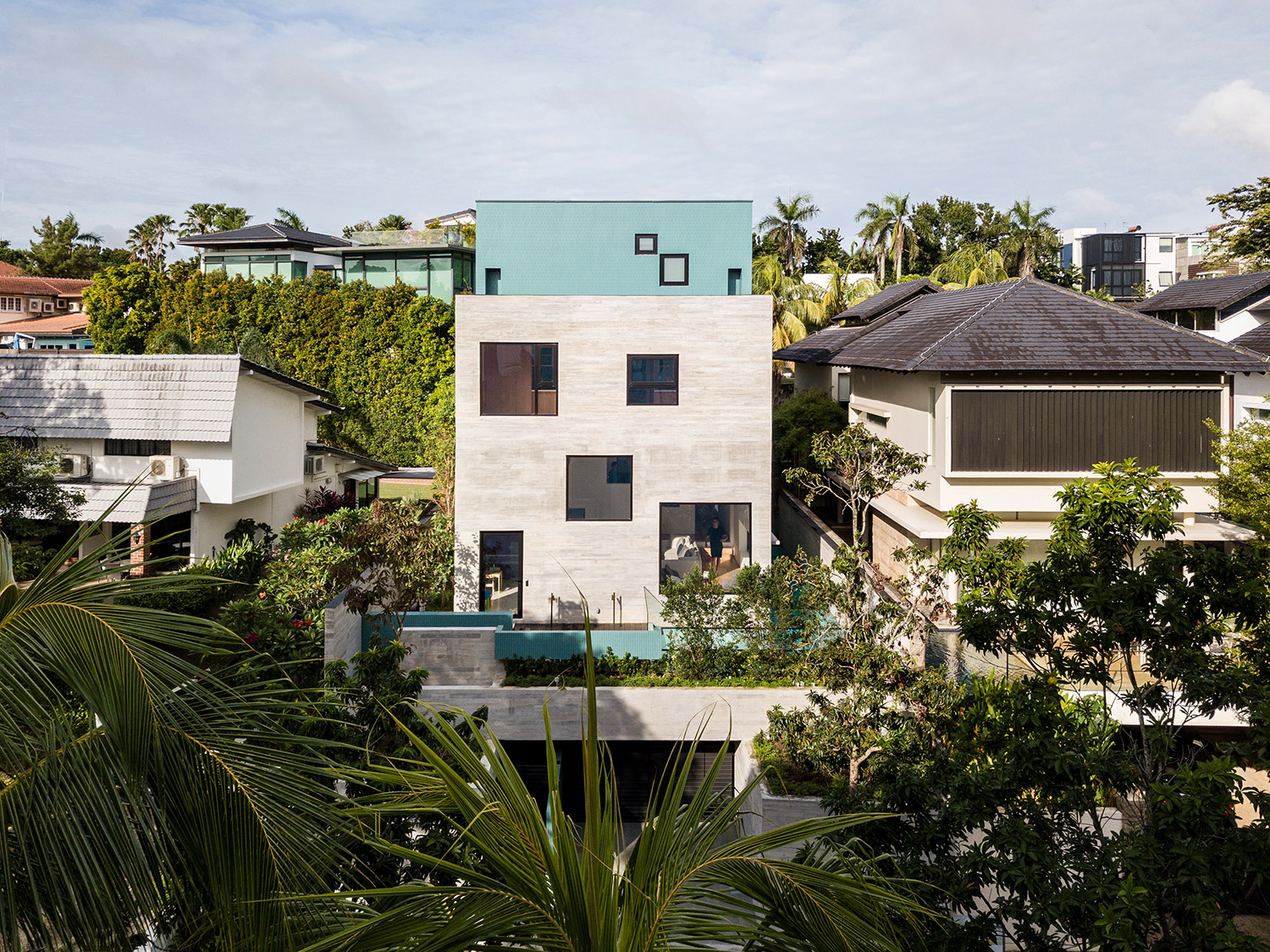 From the outside, you get a clue that the house has no ordinary design from the asymmetrical placement of square windows of different sizes on its façade.

In fact, you kinda get the impression that you can see straight into the house.

However, if you’re viewing it from street level, you would see that the basement is at street level, as highlighted by Channel NewsAsia Luxury (CNA Luxury). 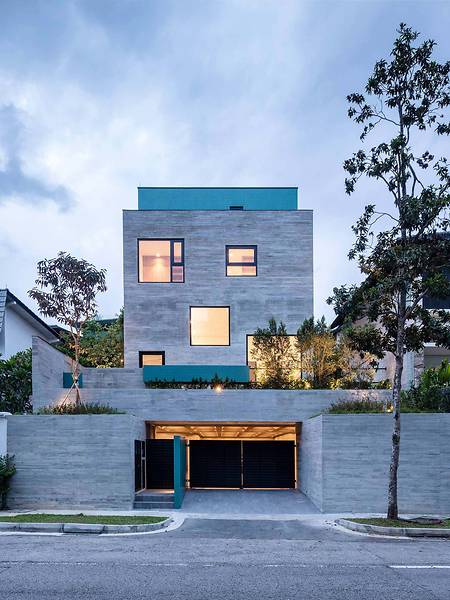 Thus, those looking from the main road can’t really see much of the house’s interior through the windows.

In fact, they might even wonder how many levels the house has, given that the windows on the façade overlap and don’t correspond with a particular level.

Once inside, it’s evident that the cavernous basement can store 4 cars. 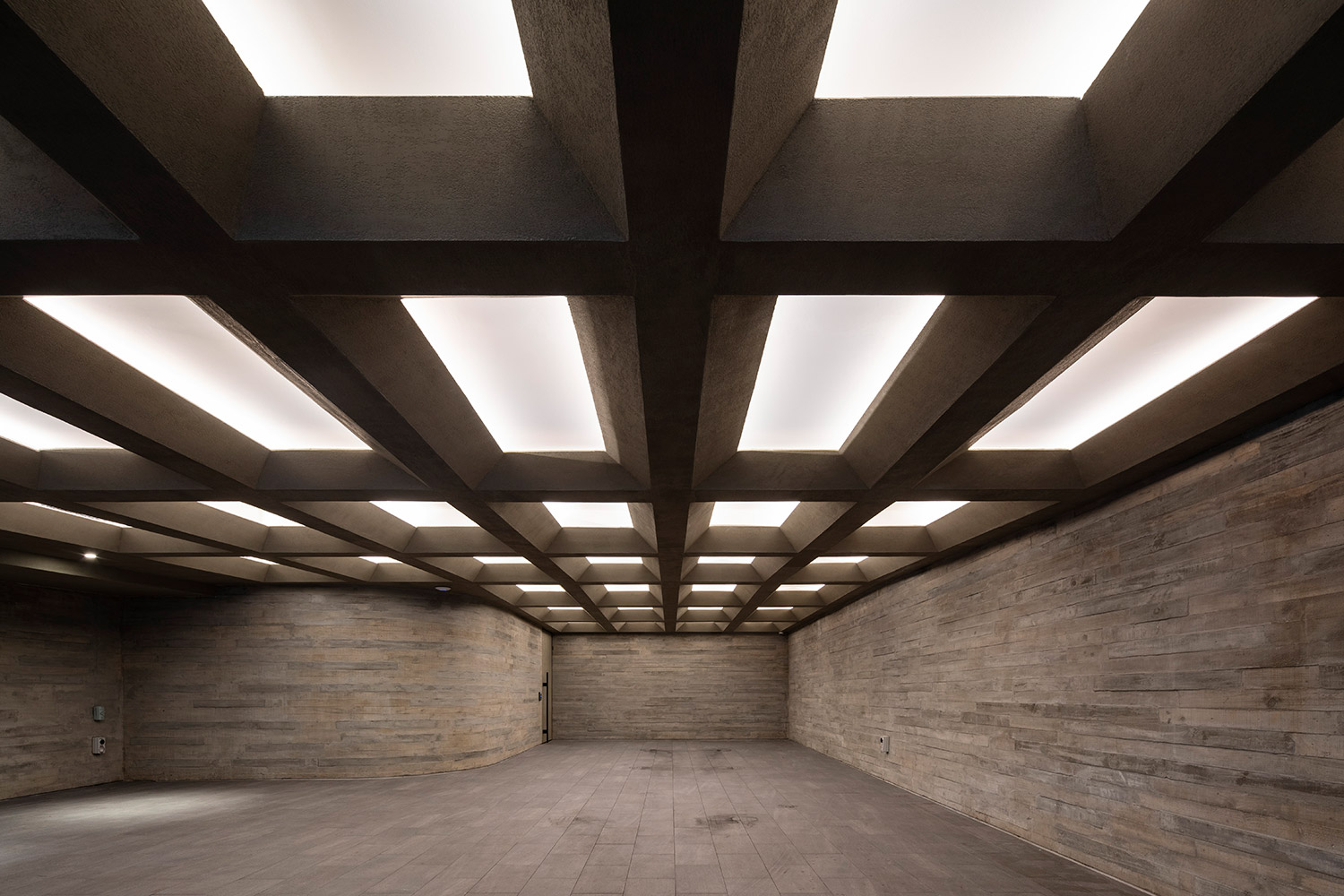 However, it isn’t dark because of the windows surrounding the spiral staircase, which leads up to level 1. 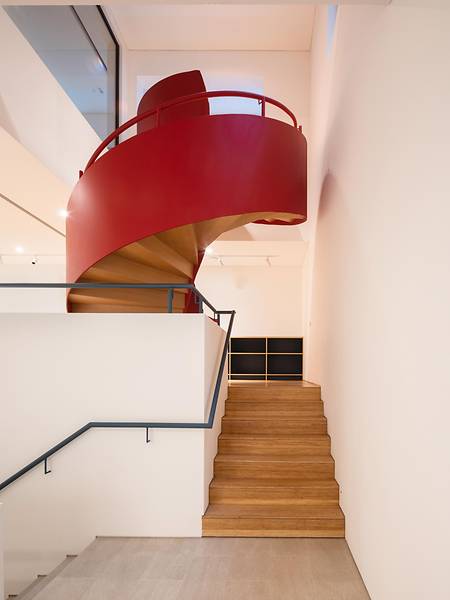 It also goes down to a basement mezzanine and lower basement with a lounge and movie room. 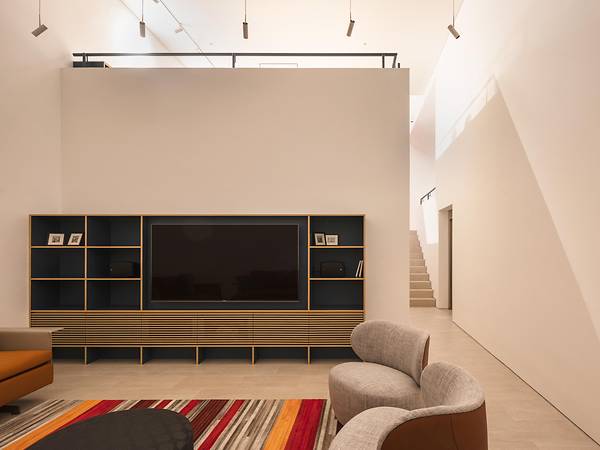 When you enter the house proper, it’s evident that there’s a central courtyard framed by internal windows that gives the house natural light and a sense of space. It also allows the residents, a couple with a 4-year-old daughter, the unique experience of looking in a window to gaze across at another part of your own house.

It’s also a good way for them to keep an eye on their child, who might be in another part of the house but still in view. Once you’re inside, the genius of the window design becomes clear.

Instead of letting you see every single thing about the house, every window is actually placed strategically to focus one’s eyes on a specific view of the landscape. Some are also placed so the viewer can have a link to other spaces in the house.

The windows also have a function of making the house seem bigger than it actually is. 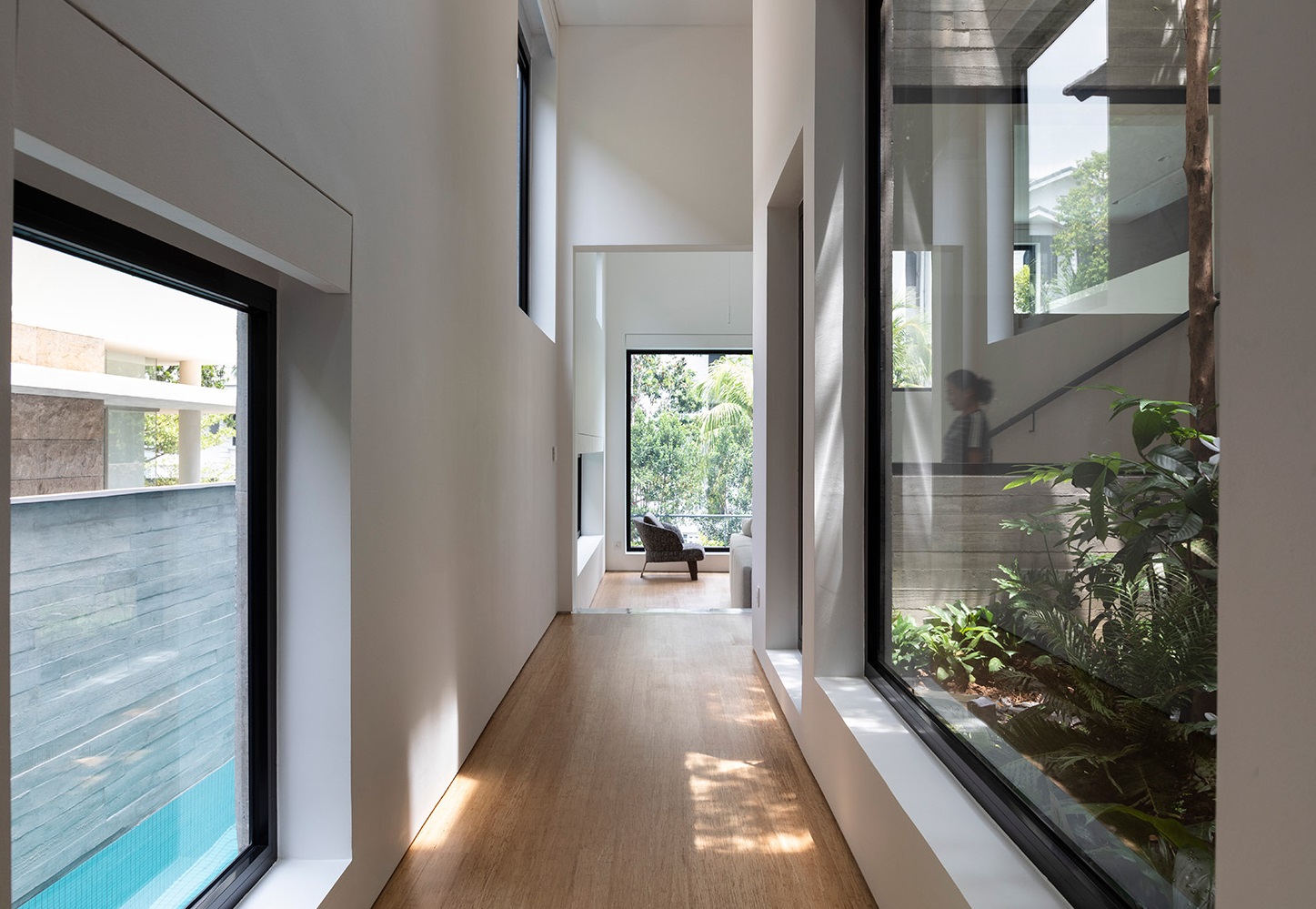 As one walks through the house, the changing perspectives give you a different visual experience at every turn. 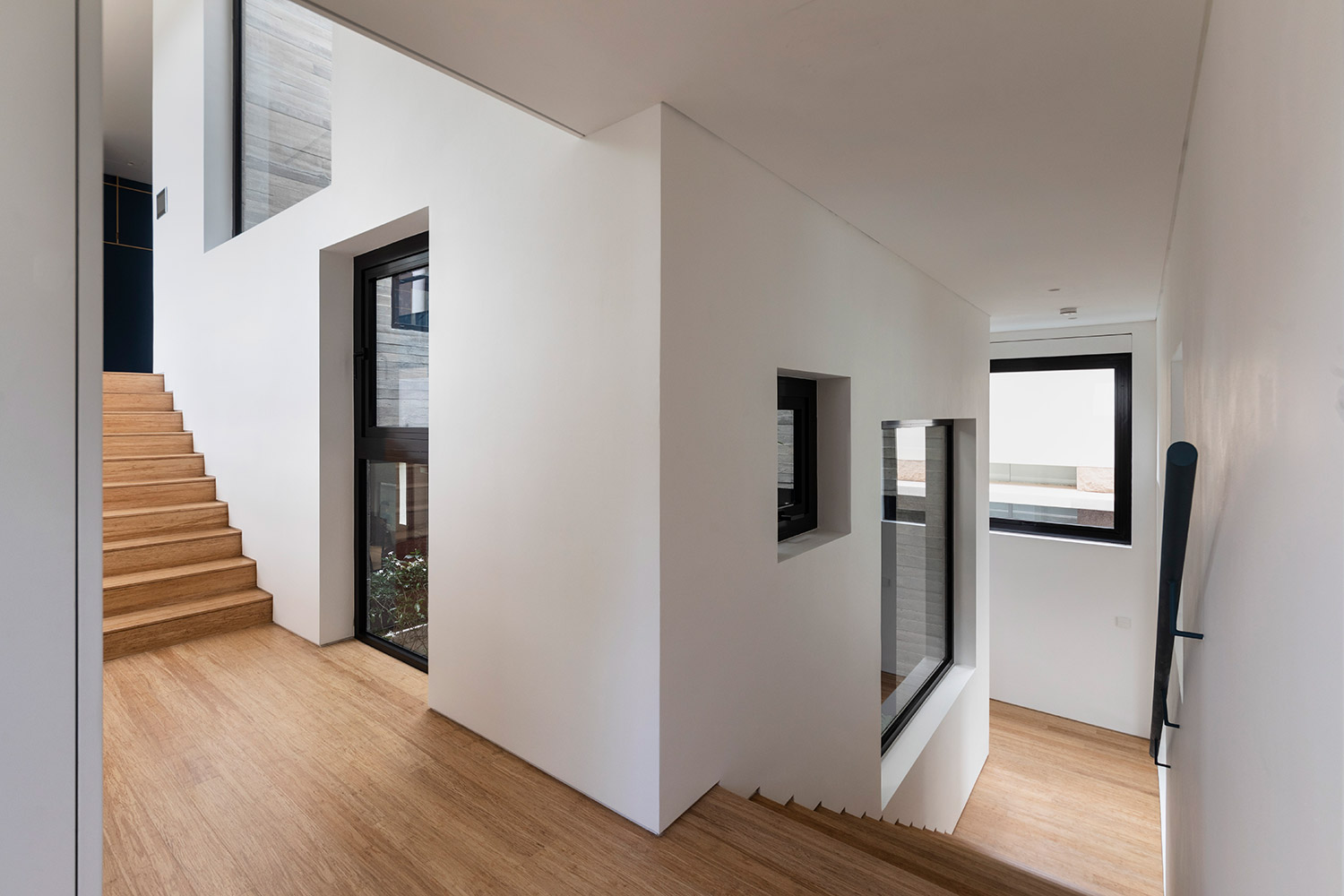 Even the living area has a panel-less “window” that allows one to gaze at the staircase, as well as other areas of the house. 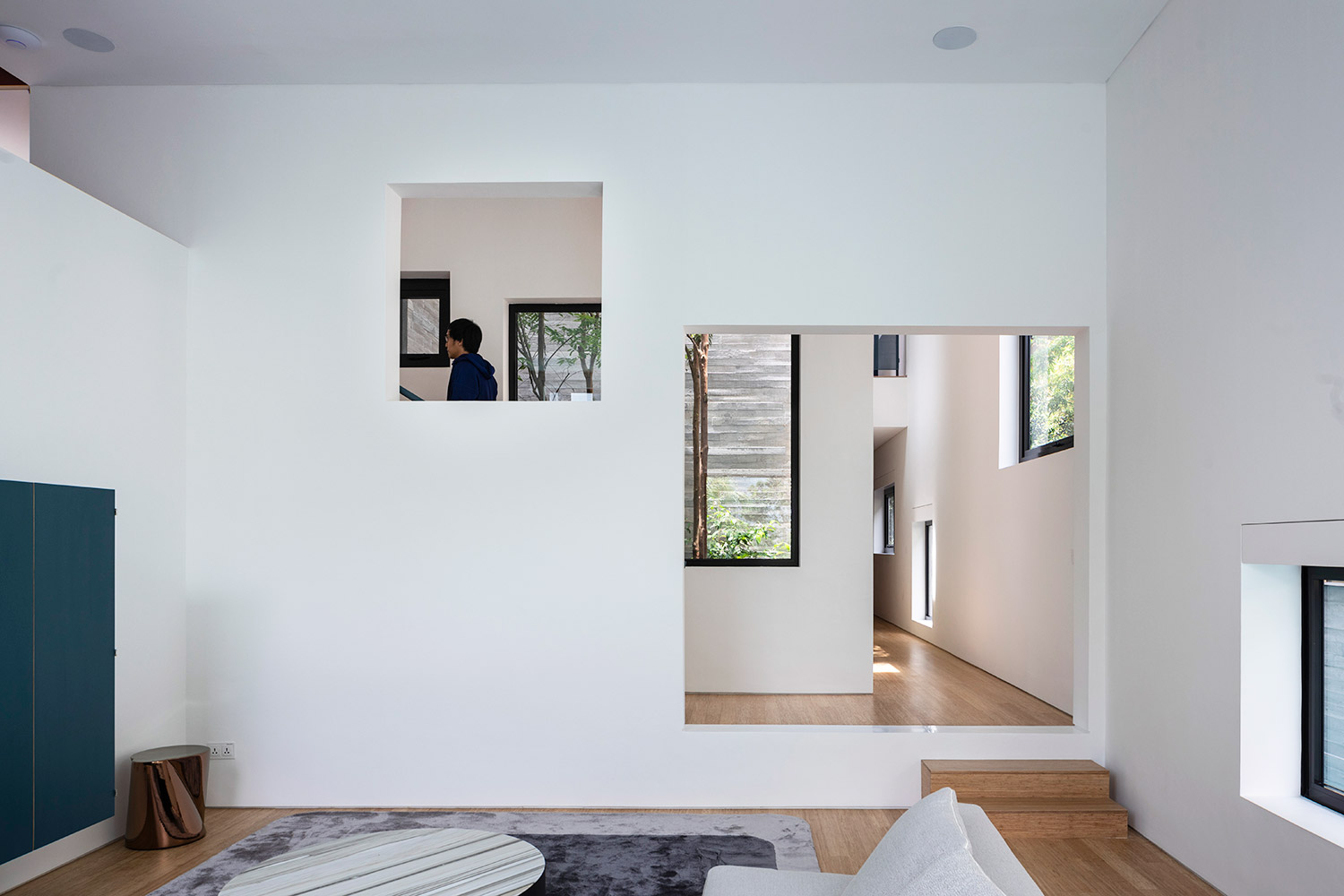 Another feature of the house is the lack of big rooms closed up behind doors — instead, the spaces within are interconnected.

They flow into one another in a continuous landscape, so residents can move between spaces.

There are at least 10 various spots in the house that you can relax in or do your thing without cutting yourself off from the rest of the house — ideal for big family gatherings. 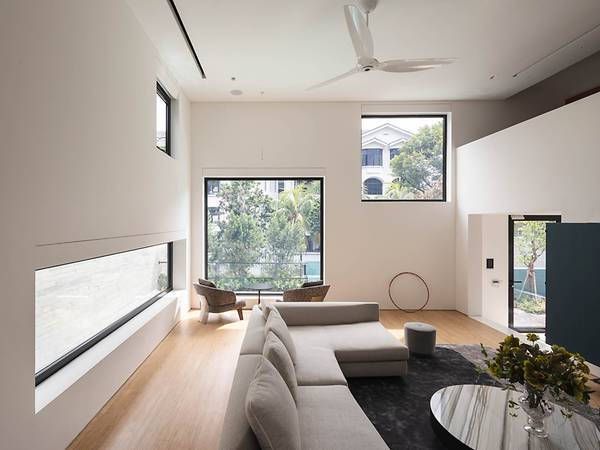 But the house isn’t all just white walls and natural light.

Architects Super Assembly also added splashes of colour throughout to brighten up and differentiate different parts of the house.

For example, the study area has burgundy cabinets. 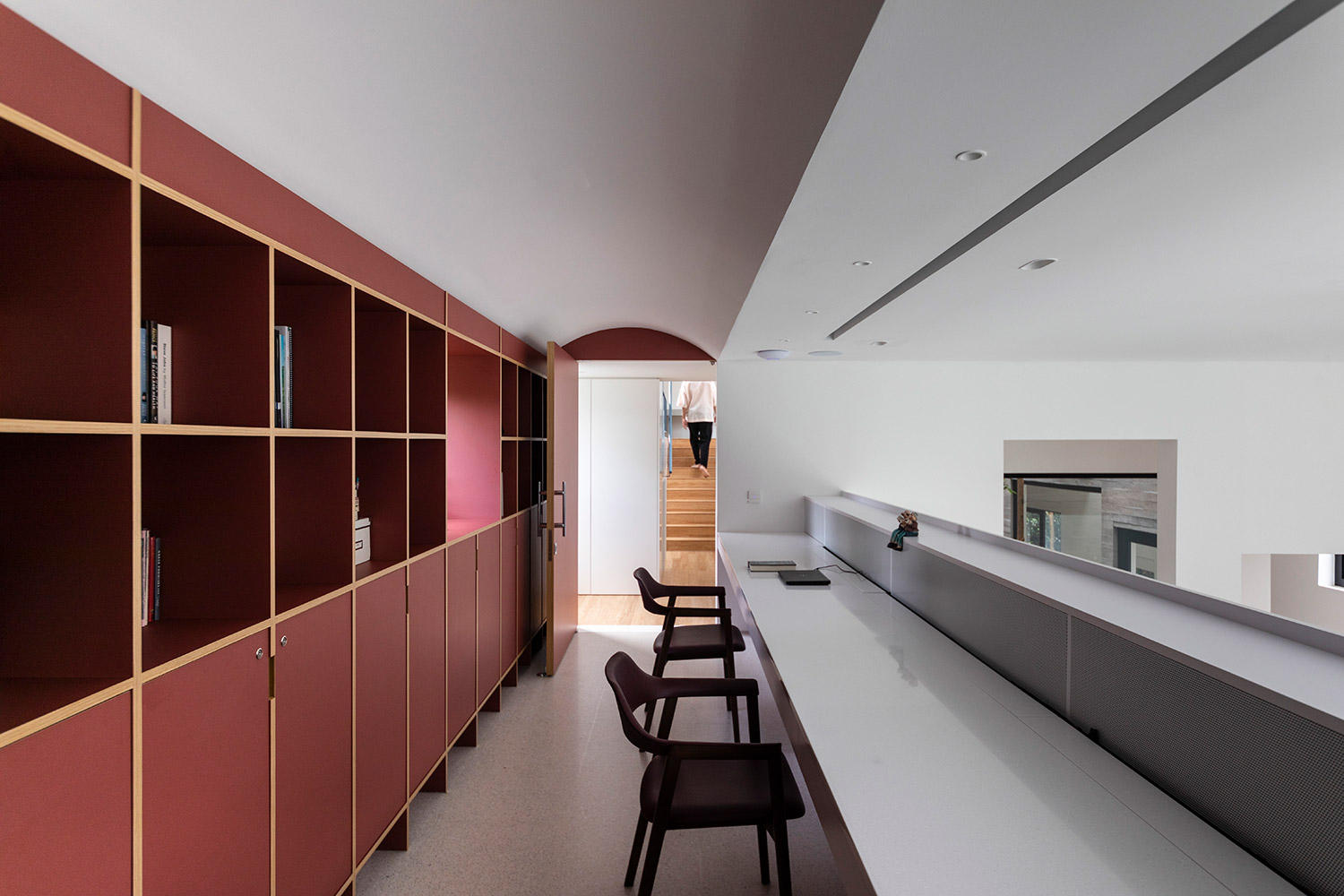 A bathroom has green mosaic tiling. 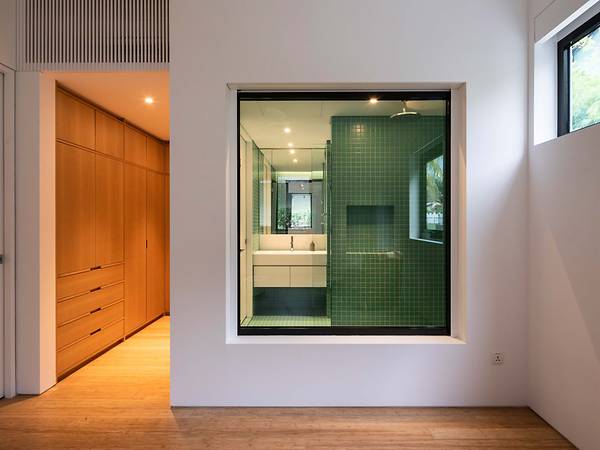 A dark red screen separates the kitchen from the dining area. 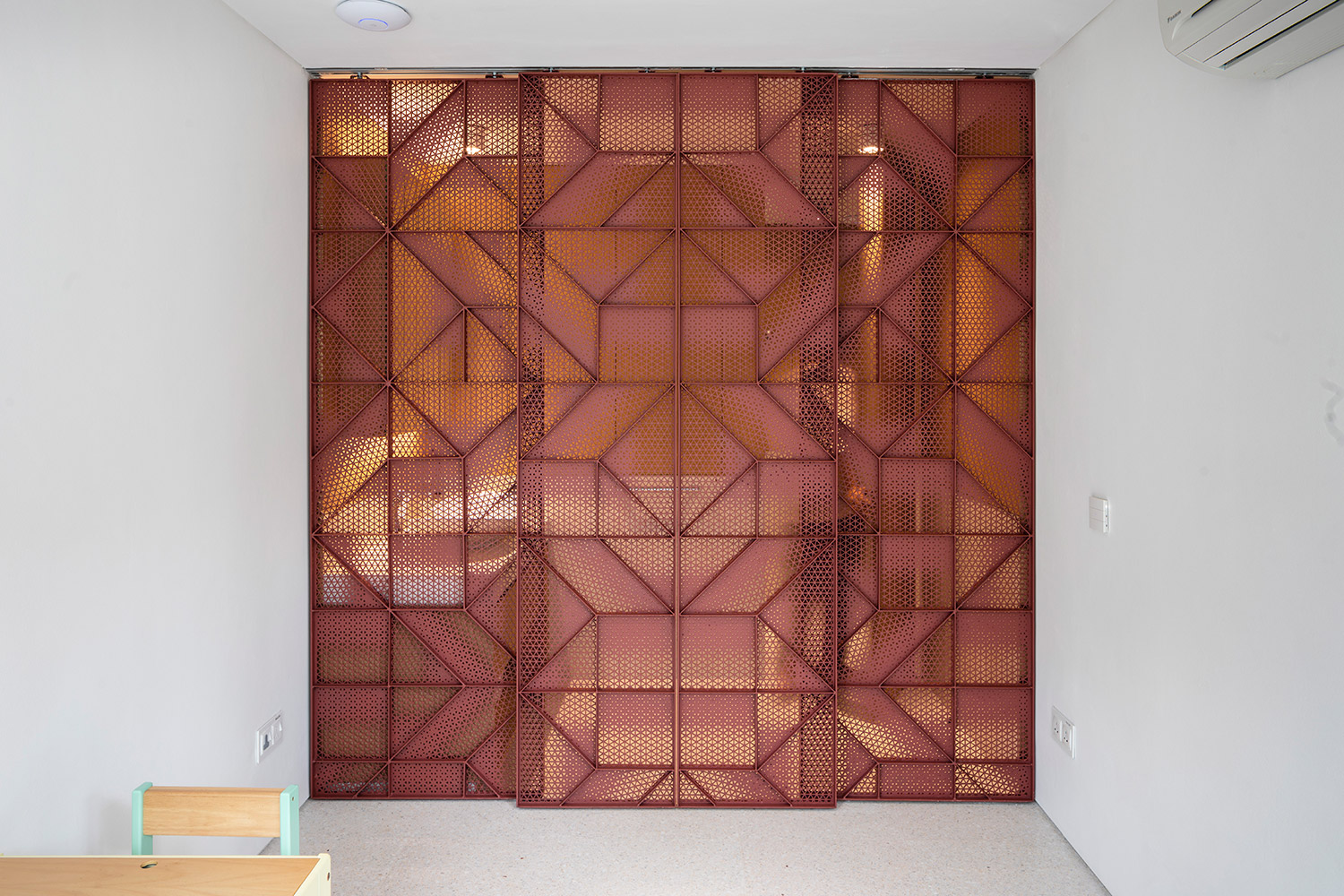 A particular highlight is the child’s play area, which is painted in a whimsical combination of dark green walls and shelves with a blood orange window niche. It also features a hideway corner. 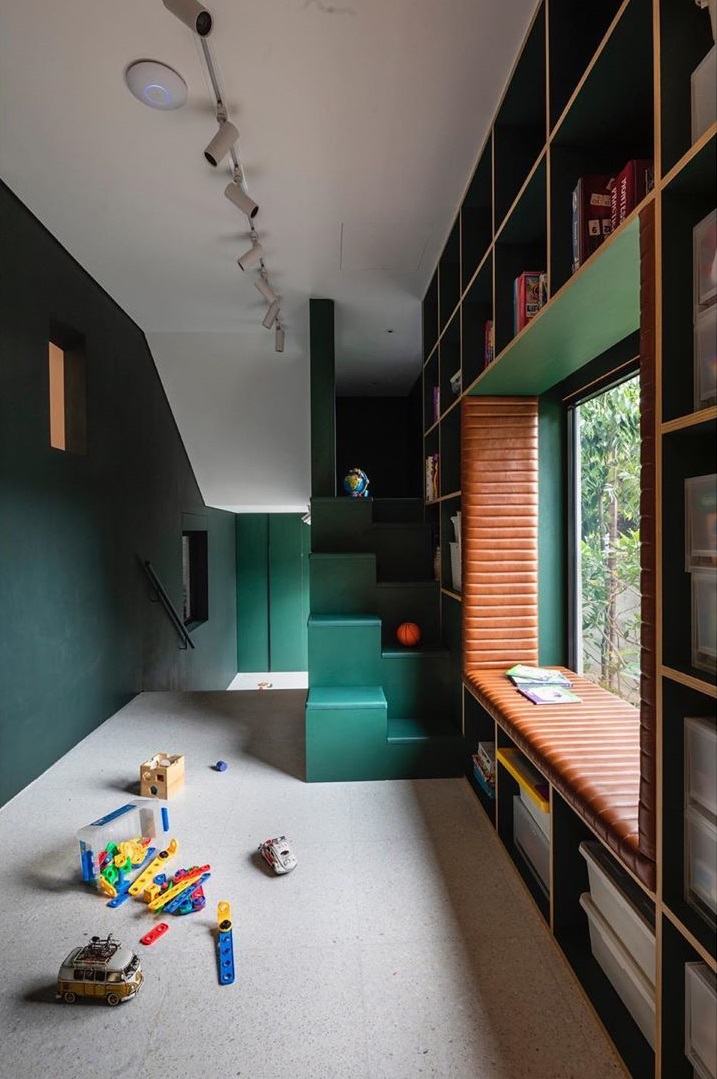 There’s also a built-in slide, which is ideal for children to get a little exercise while exploring their perfect playground. The entire space is open, so adults can watch the children as they play.

Cleaning the windows may be difficult

While some might baulk at the number of windows in challenging locations that will have to be cleaned (consider the poor domestic helper), the Window House is a clear triumph of contemporary design. 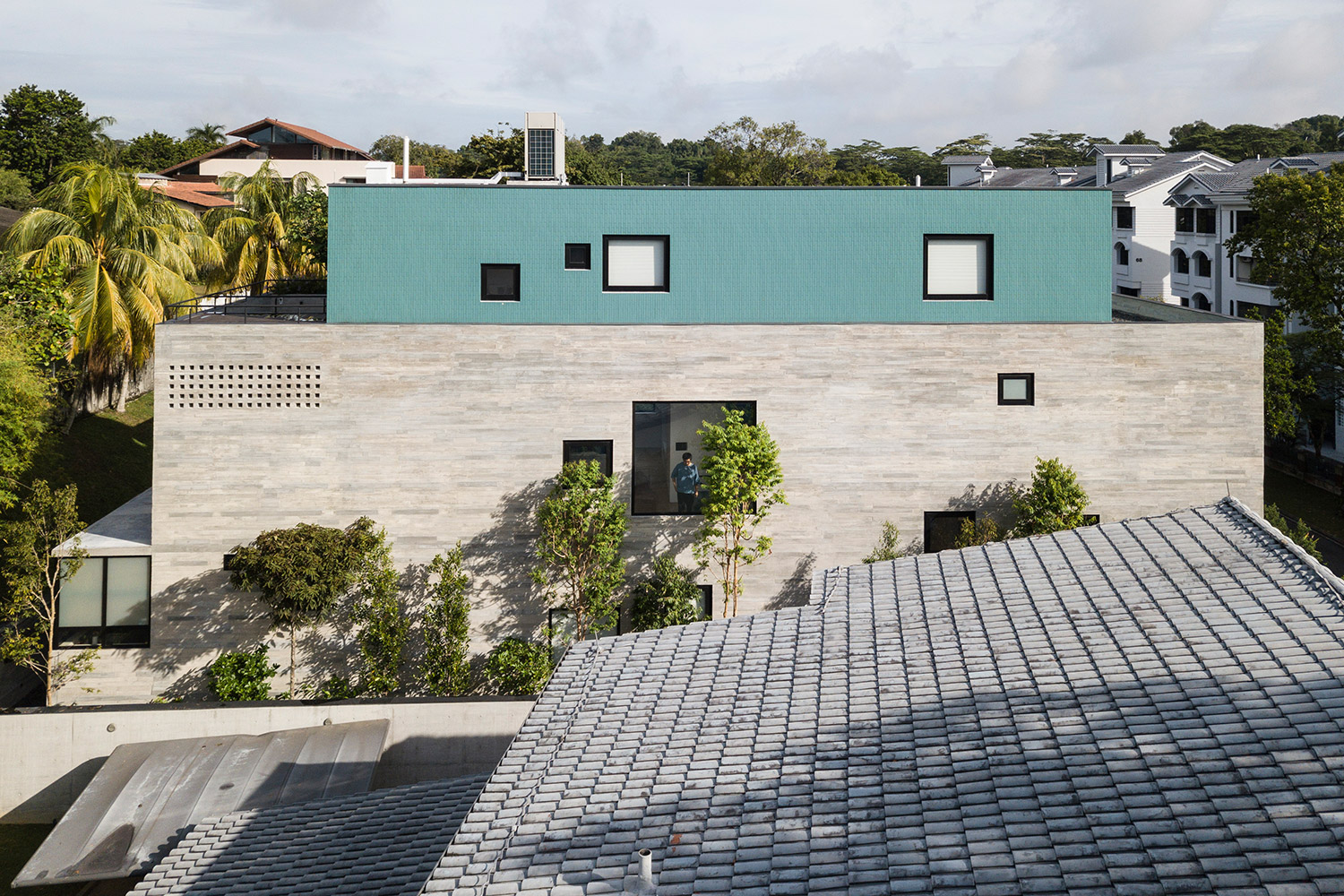 It’s uncertain whether any of the windows have curtains or not, though, just in case the daughter grows up to a teenager who’s sick of her parents being able to constantly see her.

Still, we applaud the designers for coming up with this landed property masterpiece that gives us serious house envy.

What do you think of the Window House? Do comment below.