When it comes to fried rice in Singapore, many of us know the importance of wok hei — the dizzying & addictive fragrance that comes from tossing the grains in high heat, oil & egg wash. Not all of us know how to make it, however.

This young chef is out to prove that age is but a number, with his impressive display of wok skills as he cooks for his baby brother.

Just like the video is titled, it is truly one of the best videos you’ll be seeing today. In case you don’t have time to watch the 2-min clip, we’ll walk through the highlights below.

The video begins with a young boy preparing a cast-iron wok. He lifts it up and places it carefully onto a charcoal stove before drizzling & spreading oil evenly on the pan using a metal spatula. 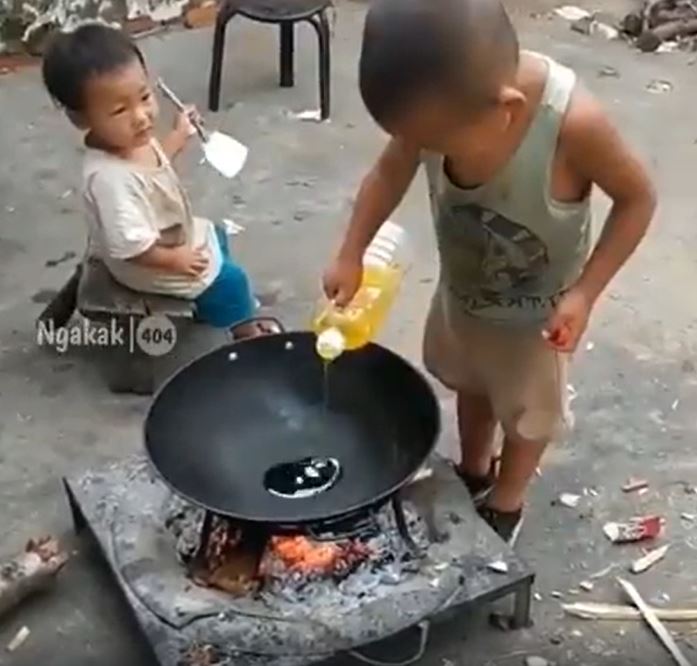 He proceeds to ask a young boy sitting by the side – presumably his baby brother – to hold an egg for him, while cracking the other carefully on the edge of the wok.

While many of us would be worrying about his safety, rest assured that he’s well-supervised by his guardian behind the camera.

Using impressive spatula skills, he adeptly scrambles the eggs till they’re light and fluffy. His baby brother yawns while watching him hard at work. 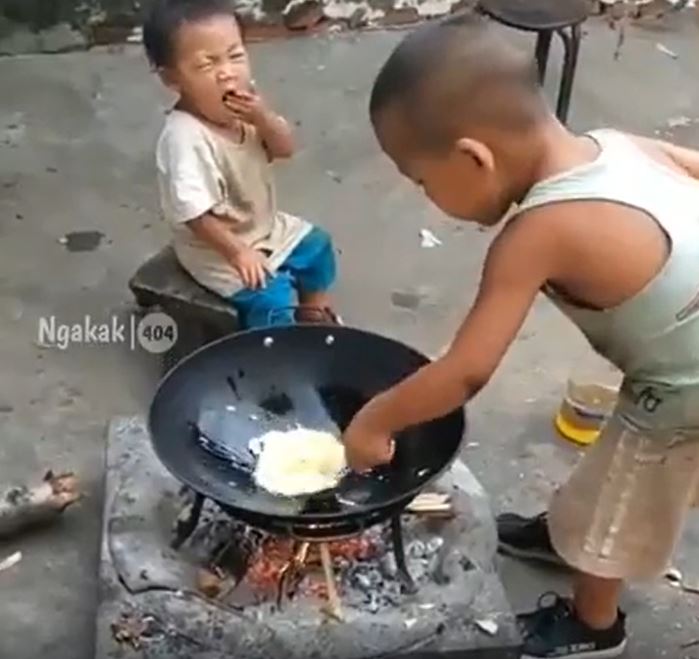 Next he hands tomatoes to his little assistant, adorably stealing a piece for himself to munch on before adding it to the wok.

The next step is adding a generous helping of white rice into the pan. 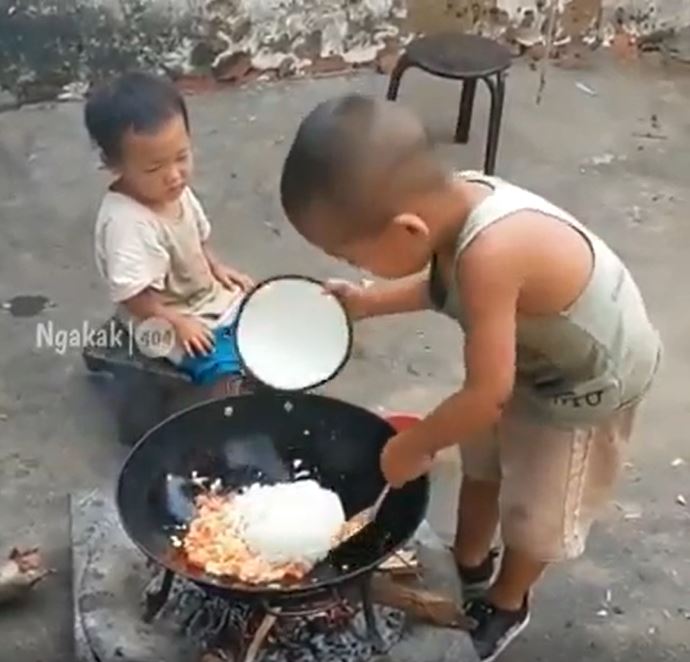 Followed by an enthusiastic ‘thumbs up’ from his little fan for moral support.

Observe how he grounds himself with his feet to maneuver the spatula around freely. A true wok prodigy in the making.

Not forgetting to garnish with care

The boy then runs offscreen to grab a white bag of ‘powder’. He proceeds to sprinkle a liberal amount of salt or MSG straight from the packet. 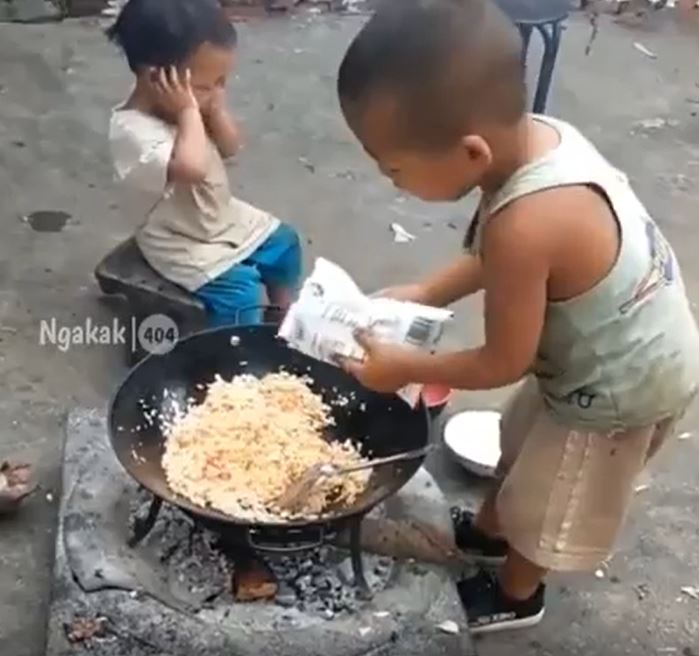 When he is done, he garnishes his dish carefully with greens in a move that would make Salt Bae himself proud.

Voila! The wok-fried rice is completed in a few more swishes of the young boy’s spatula.

Serving his brother first, before himself

Portioning the completed fried rice into 2 bowls – one for himself and the other for his brother – our young chef whips out a spoon in a truly touching gesture. 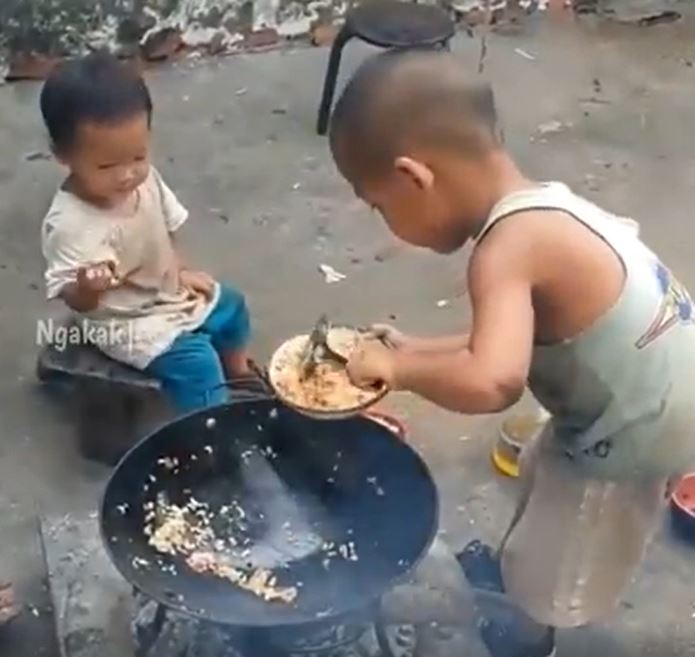 He makes sure that he feeds his younger brother first before tasting the dish himself.

Cue the awwws for his touching act of brotherly love.

The video, uploaded in Oct 2019, has gone insanely viral with 3.3 million shares on Facebook at the time of writing, clocking over 200 million views.

Most netizens have praised the brotherly affection the young chef displays for the younger boy, sharing that it “brought tears” to their eyes.

Homecooked food is the universal language of love

Besides the young boy’s spectacular spatula and wok skills for someone his age, we celebrate his boundless energy & love for his younger sibling. 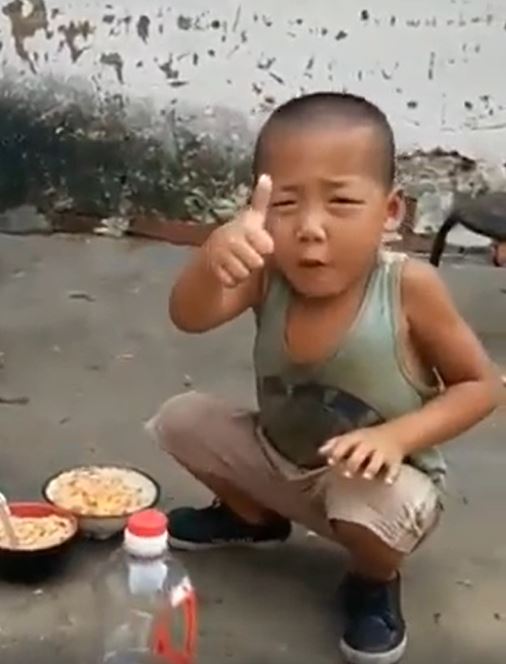 This Lunar New Year, as we enjoy a time of reunion with our loved ones, we should also remember those who toil behind tirelessly in the kitchens to deliver delicious dishes for us on the dining table.

Nothing says ‘I love you’ better than a piping hot bowl of homecooked fried rice, after all.