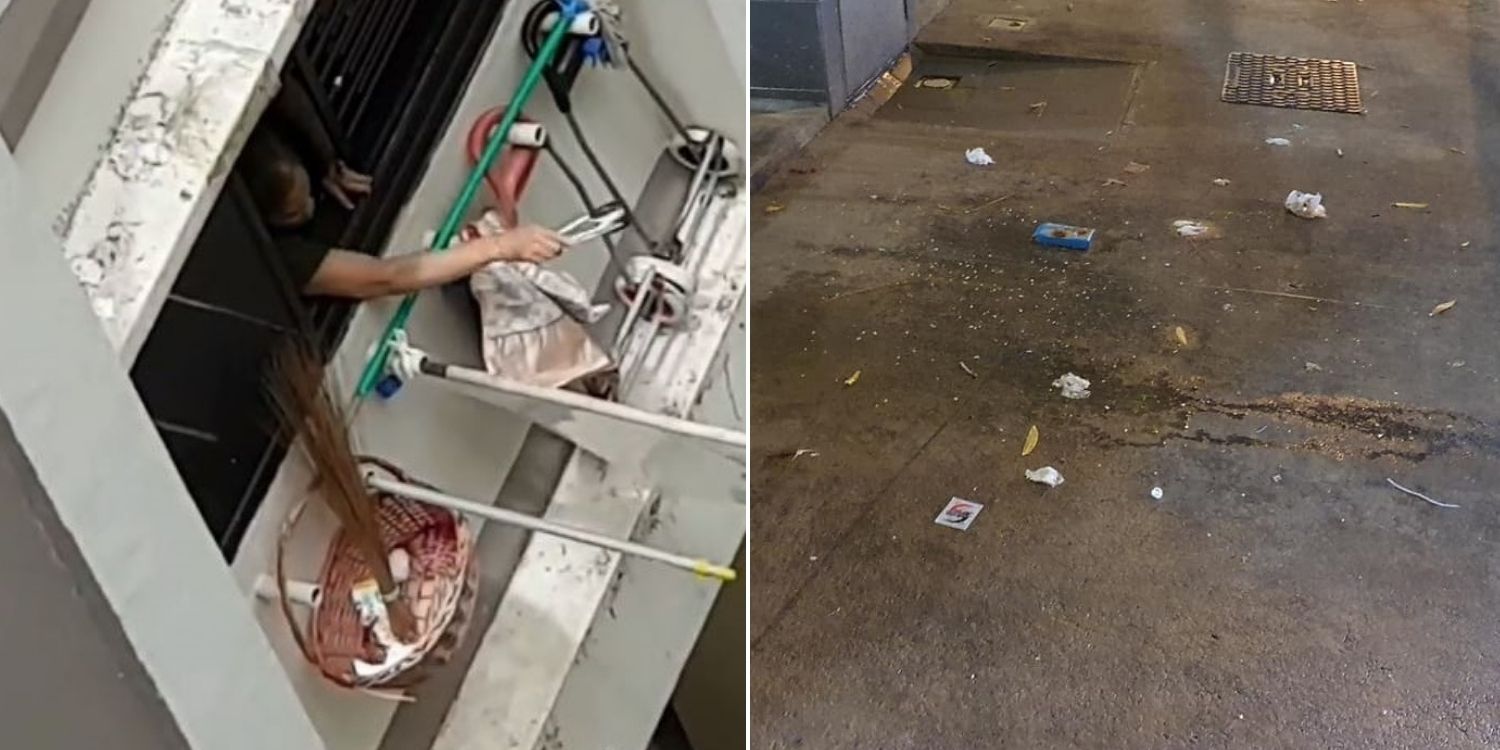 The culprit was caught in the act on video.

For many Singaporeans, their home is their refuge, a place of rest and repose in comfort and clean surroundings.

But while you can make your home as comfortable as possible, we can’t control what happens outside, sometimes in our immediate surroundings.

Take this resident of this block in Aljunied, who’s greeted by the sight of this every day. She says one of her neighbours continues to dispose of food waste out of her kitchen window, leading to an unsightly mess at the foot of the block.

She’s complained to the National Environment Agency (NEA), and they’ve said they’ll potentially put up cameras, but she hasn’t heard back from them yet.

In a Facebook post on Tuesday (3 Nov), Ms Wong Zi Qin complained about what she called “high-rise littering and pigeon feeding” in her estate. Clearly at her wit’s end, she said her neighbour doesn’t seem to know what a dustbin is — or if she does, can’t be bothered to use one.

Instead, she throws food such as rice, biscuits and other food waste directly out of her window, ostensibly to feed the pigeons. 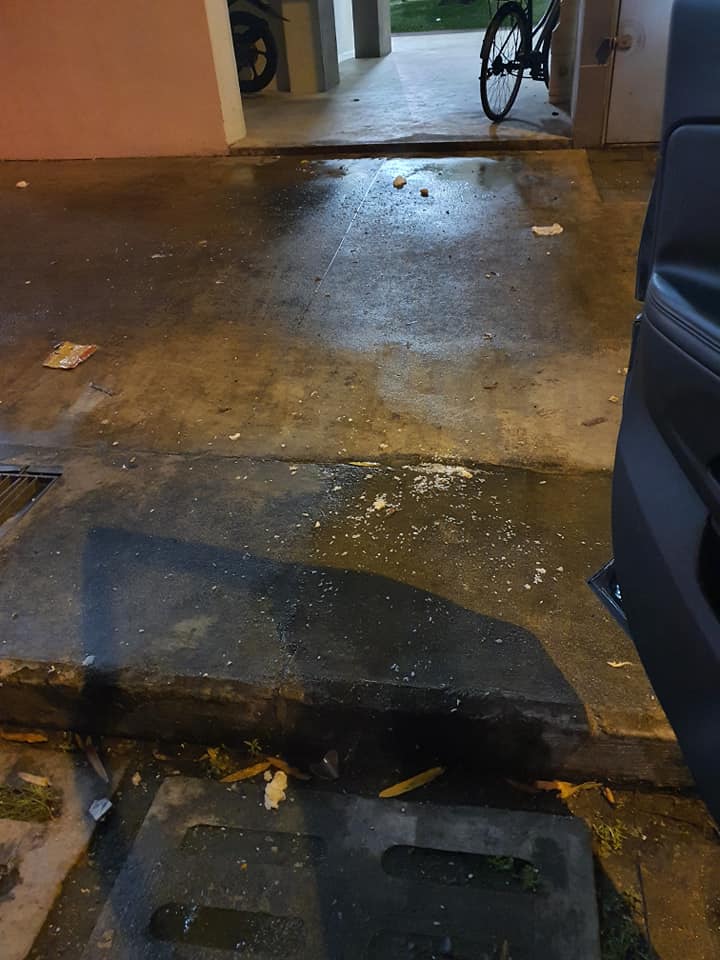 Calling the habit “super disgusting and unhygienic”, that’s not all that’s wrong with it. While feeding the pigeons may not be so bad, she said the mess also attracts more repulsive creatures.

At night, rats and cockroaches also scurry across the path, she said.

And as it’s a common walkway that she has to cross to get to her lift from the carpark, she can’t really avoid encountering the mess.

From the photos Ms Wong attached, the food waste seems to be mainly grains of rice.

However, it seems that the neighbour also throws out other stuff too, like bones. 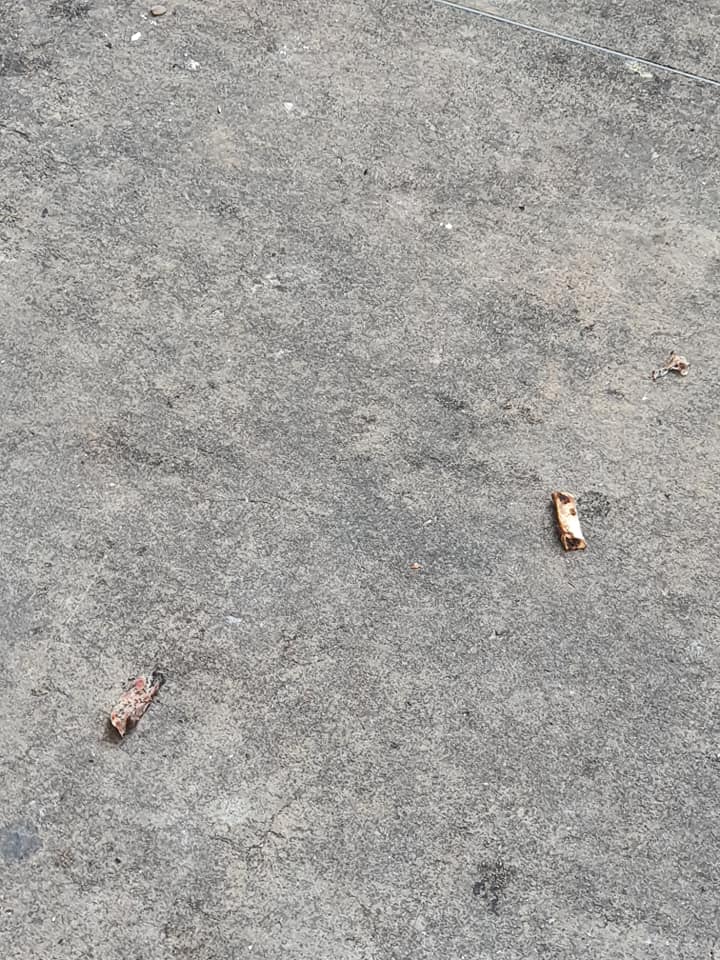 She also saw what looked like slices of cheese and a packet. 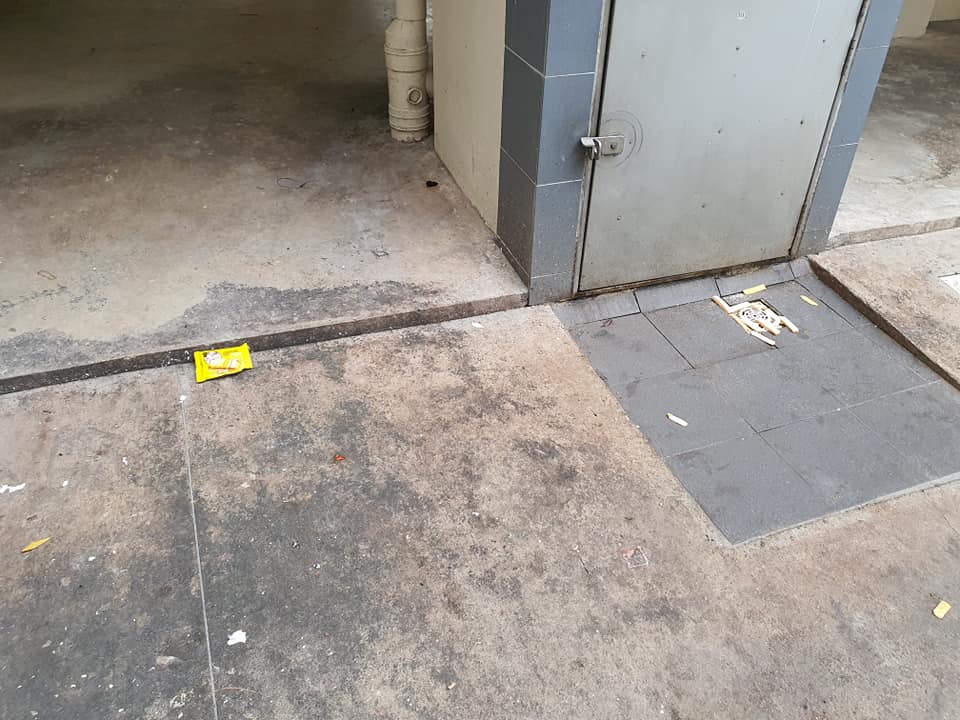 Once, she saw what looked like uncooked noodles, too. 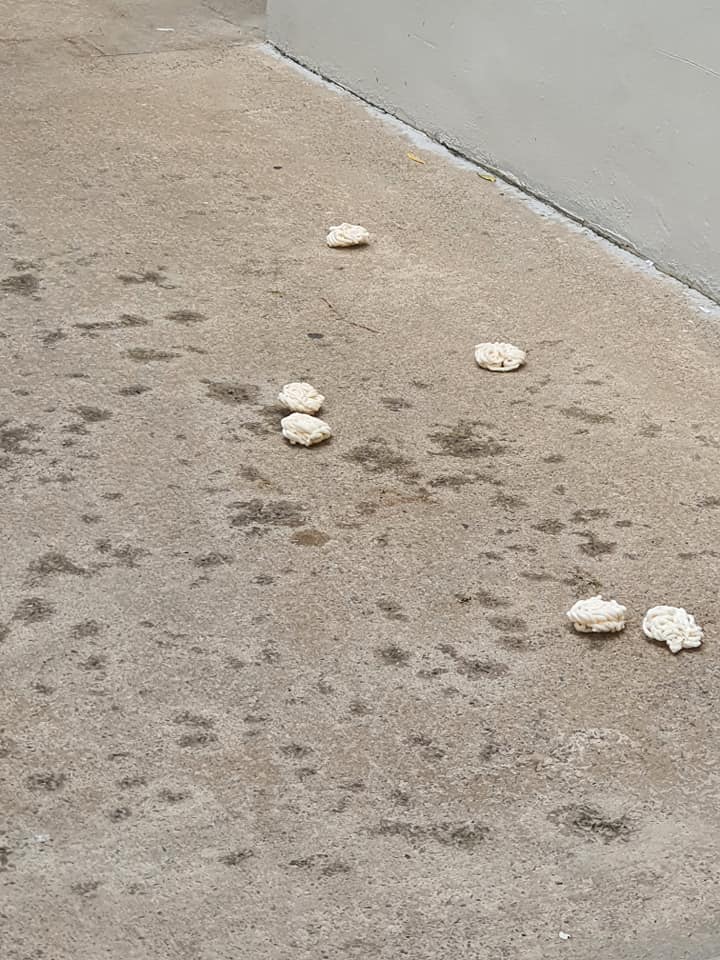 Clearly, all sorts of small food items are fair game.

Since she moved into the estate in Feb, she’s noticed the littering is quite persistent.

Hence, she even managed to take a video of the culprit, catching her red-handed.

Turns out the culprit appears to be an old lady on the 2nd floor, and in May, they advised her not to feed the pigeons in this way.

Then, she discovered that it wasn’t one resident doing it, but 2 — another unit on level 5 was also observed to be clearing food waste from their pots out the window.

As evidence, she took another video where it can be seen that the ledges of these 2 units’ windows were dirty. 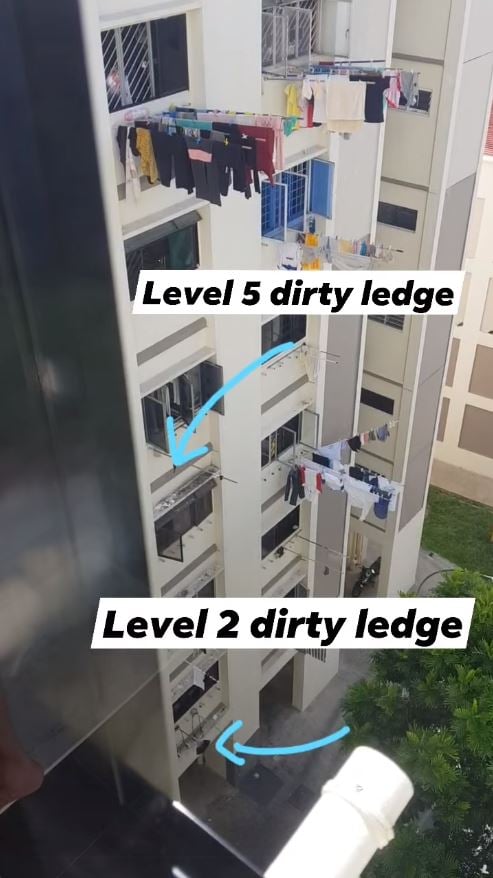 Since the littering didn’t stop even after she had talked to the neighbour, she called the National Parks Board (NParks) on 12 May.

However, since it was the ‘Circuit Breaker’ period at the time, they couldn’t send an officer down.

When they finally sent an officer down, they said they didn’t see any littering. Giving them the benefit of the doubt – perhaps it’s just bad timing – and the fact that the culprit is an old lday, Ms Wong didn’t want to pursue the matter further beyond issuing a warning to them.

So on 8 Sep, Ms Wong lodged a report with Aljunied-Hougang Town Council (AHTC) on the matter.

She also sent them video evidence of the acts. 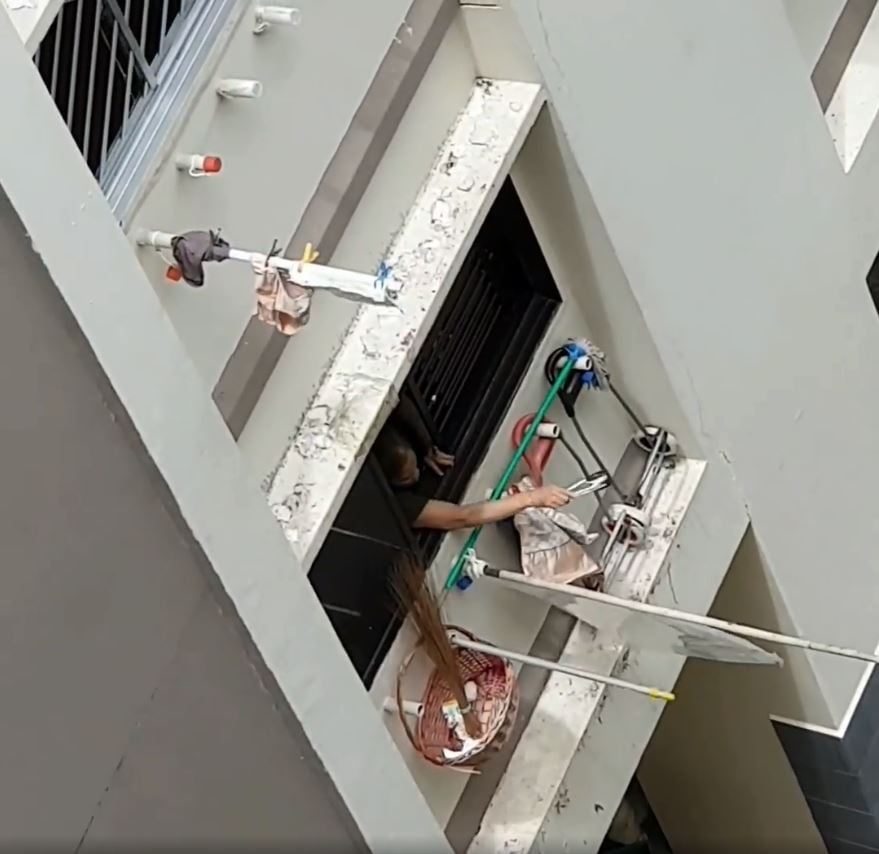 AHTC responded fast — the next day (9 Sep), it served an “education notice” to all the units in the block above the problem area, from levels 1 to 10.

According to Ms Wong, the National Environment Agency (NEA) also got in touch with them.

They were potentially looking to install cameras, she said.

However, she added that she never heard from them again.

After a month, there was no improvement in the situation, and the littering continued.

Thus, on 8 Oct, she sent photo and video evidence to AHTC again.

On 13 Oct, AHTC asked for permission to send the video evidence to NEA.

However, since then, she’s heard nothing. Frustrated, she took to Facebook and implored NParks and NEA to take action.

Do show consideration for neighbours

Living in high-rise public flats is the reality of life for majority of Singaporeans, and most of us just want a clean environment to come back to at the end of the day.

However, this requires the cooperation of all residents by not making common areas dirty.

Throwing food waste out the window may not kill, but its unsightly and also unhygienic, especially now we’re in the midst of a Covid-19 pandemic.

If what Ms Wong has said is true, hopefully the culprits will stop their behaviour.

When we just show some consideration for our neighbours, all of us will enjoy our lives a little bit more.