On Monday (6 Aug), Defence Minister Dr Ng Eng Hen revealed the preliminary results of a 3-month long investigation into the death of CFC Dave Lee. As widely speculated, the Committee of Inquiry (COI) uncovered several lapses in safety and training.

Although Dr Ng was careful not to directly link these lapses to CFC Lee’s death, the implied links were hard to miss.

As expected, local netizens had an opinion about the findings. Here are some of the comments that best represent how Singaporeans feel about the factors that might have caused CFC Dave Lee’s death.

1) The top must change

To some, the repeated deaths of NSFs was symptomatic of a larger issue within MINDEF – but one that was not being addressed.

This netizen feels that the culture can change only when “those at the very top” are held accountable for deaths and safety lapses. This netizen agreed, saying:

Others had a more positive view of the SAF, saying that people involved in CFC Dave Lee’s death were just “bad eggs”.

Judging by the reactions to her comment, it seems to be a popular view.

Netizens also took issue with the range of new measures the SAF is introducing to prevent and manage heat injuries.

While some criticised the “reactive” reaction to CFC Lee’s death, some netizens were pleased that the measures were at least being rolled out.

4) Soldiers should take care of themselves

Perhaps the most infuriating comment of the lot came from this netizen, who appeared to blame CFC Lee for not taking care of himself. 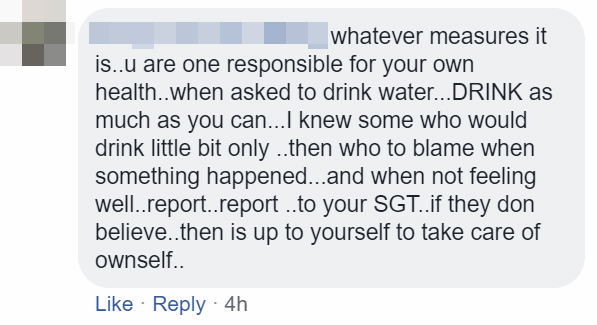 There will almost certainly be criminal proceedings.

It’s with that same conviction and belief in the fairness of our legal system that this netizen said,

As investigations continue, we hope the new measures prevent future tragedies like the death of CFC Lee. We also hope that the results of the investigation help CFC Lee’s family gain some closure.