Stay vigilant and help those around you.

Update (27 Mar): HDB confirmed on Tuesday (26 Mar) via STOMP that the conman is not linked to them.

HDB also stated that if works are to be done in a HDB flat, prior notice will be given to the respective homeowners.

Residents can also check the HDB website for more information on how to guard themselves against such scams.

Scams can happen to anyone at anytime, and we should all be vary and stay vigilant against such cases.

A Toa Payoh resident took to Facebook to share his experience with an alleged conman who asked for money to do repairs in his HDB flat. 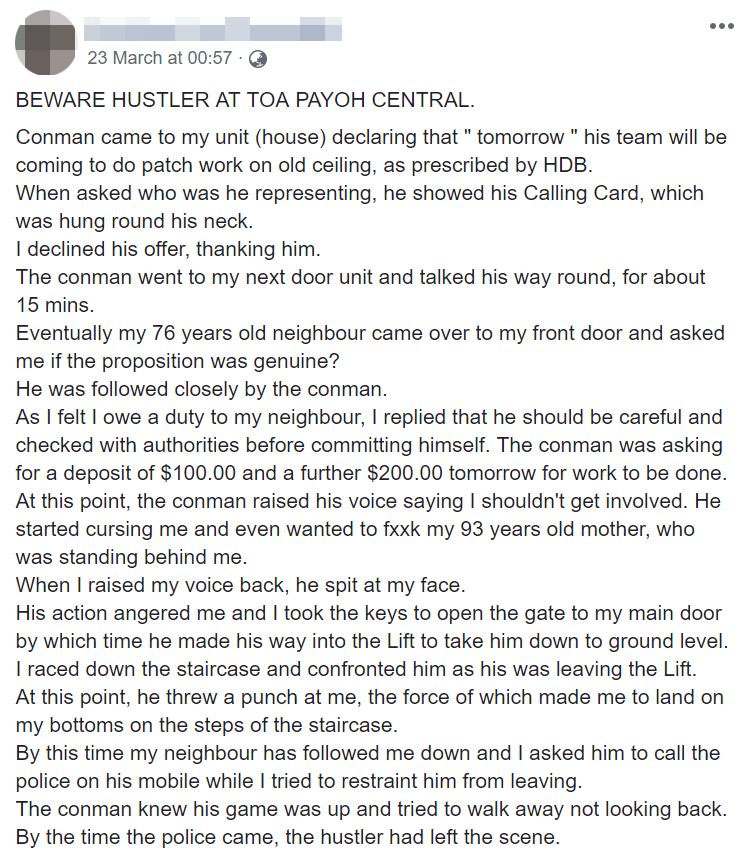 On Friday (22 Mar), the alleged conman visited the resident’s unit saying he and his staff will come by the next day to do repair works on the unit’s old ceiling, as arranged by HDB.

Skeptical, the resident asked to confirm his identity, to which he flashed his HDB identity card.

Eventually, the resident rejected the offer and thanked him.

HDB confirmed days later that the man is not linked in any way to them.

Got aggressive when doubted

The alleged conman then made his way to a neighbouring unit and talked to the resident’s 76-year-old neighbour for about 15 minutes.

The elderly man came over to the resident’s door to get his advice on whether the procedure was real, with the conman following close behind.

The resident found out that the conman had requested a deposit of $100 and an additional $200 the next day for the repair works to start.

Sensing something amiss, the resident advised his neighbour to be wary and check with the authorities before handing over any money.

The conman then got aggressive and shouted for the resident to not get involved. He even hurled vulgarities at him and his elderly mother.

When the resident shouted back, the conman spat at his face.

Fled when police was called

Unsurprisingly, his actions enraged the resident, who then wanted to confront the conman.

By the time he fetched his keys to open his gate, the conman was already in the lift, going down.

The resident rushed down the stairs in an attempt to stop the conman from leaving, and caught him just as he was stepping out of the lift.

Before he could say anything, the conman gave him a hard punch which caused him to fall.

The resident then got up and caught hold of the conman while asking his neighbour, who had followed him down, to dial for the police.

Unfortunately, the conman struggled free and left before the police arrived.

Netizens lauded the resident’s actions, with some offering advice on how to avoid such scams.

This netizen wrote that he should have protected himself instead and just hand over all evidence to the police to catch the assailant.

Another user shared that all HDB works by their contractors will not ask for payment before the procedure.

Finally, this netizen shared a similar experience in which she was almost conned by a man claiming to be from HDB.

Kudos to the resident for stepping up to stop his elderly neighbour from being cheated.

In light of such scamming cases, we hope that members of the public will stay vigilant and not fall prey to the scams.

If in doubt, refer to HDB’s website for advice on how to guard against such scams.