Must Share News – Independent News For Singaporeans
Home Viral Facebook Couple Says Having Children Is A Serious Commitment, Parents Must Truly Be... 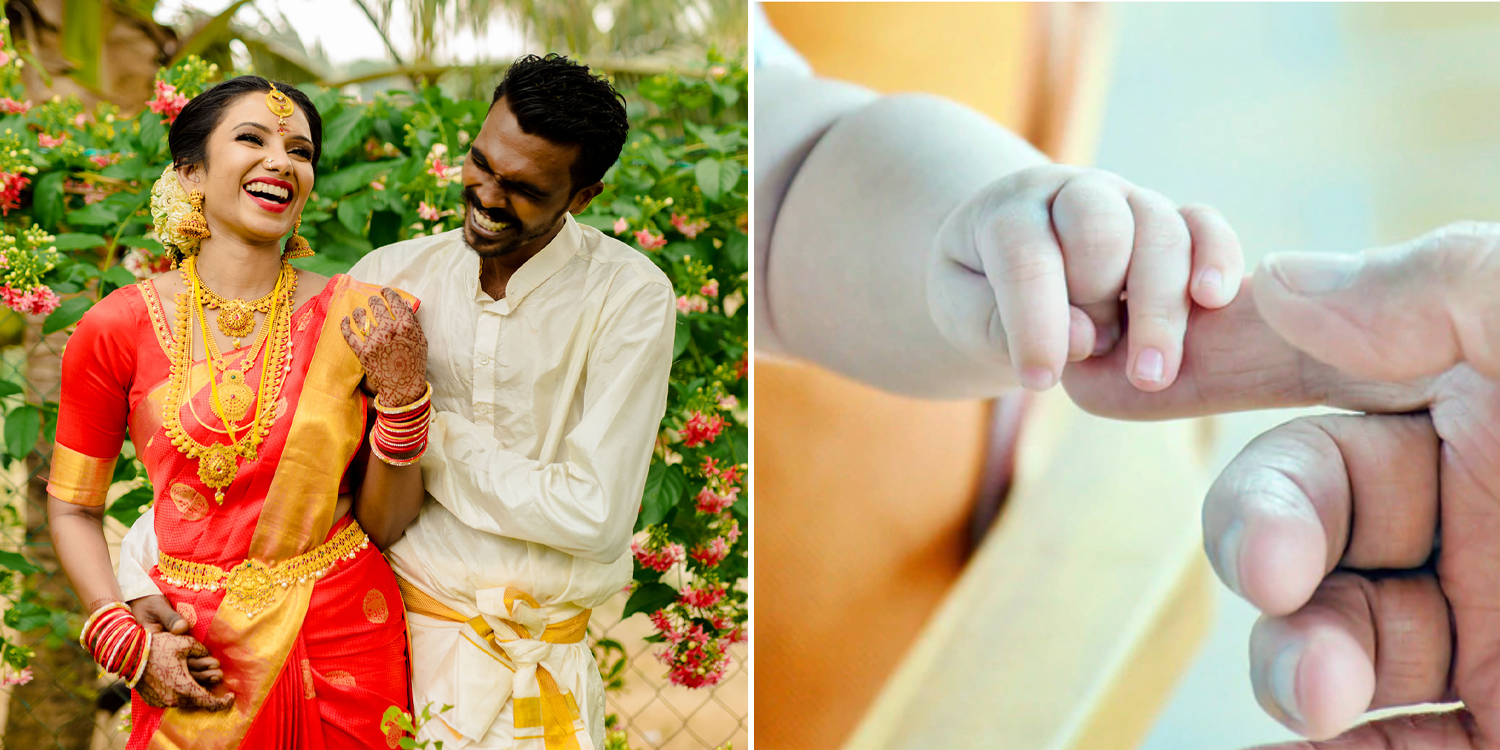 Couple Says Having Children Is A Serious Commitment, They’re Not Ready Yet & There’s Nothing Wrong

When couples get married, they often get bombarded with questions on when they’re planning to have children.

However, not everyone wants to have children these days — and that’s a legit choice, says a young, happily married woman.

She shared on Facebook why she and her husband doesn’t want to have kids, at least not right now — it’s because they’re a serious emotional and physical commitment, and prospective parents need to be adequately prepared for it. 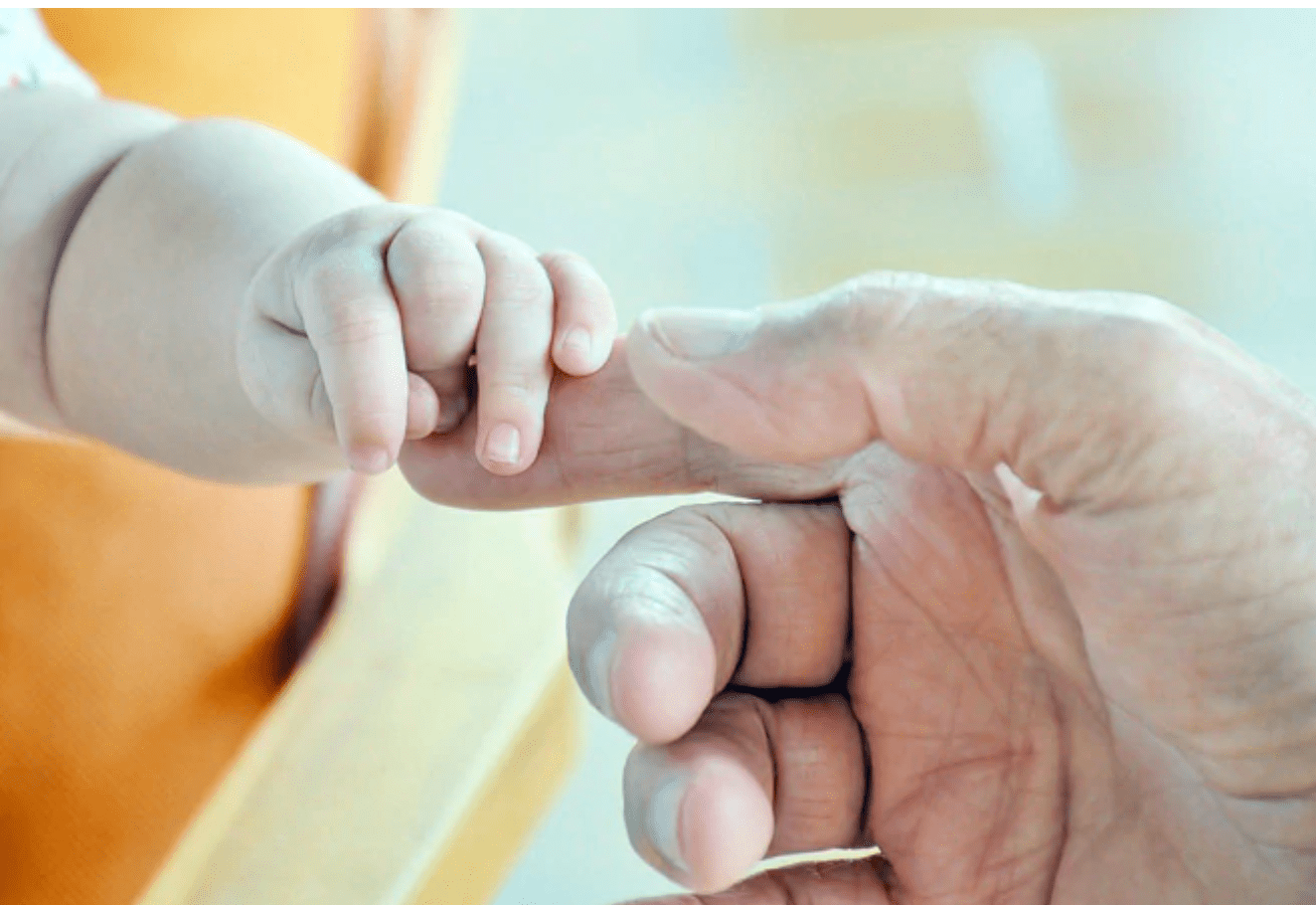 In her opinion, one should only have kids if they are able to fully devote themselves to raising them, with no strings attached. Read her lengthy Facebook post here: 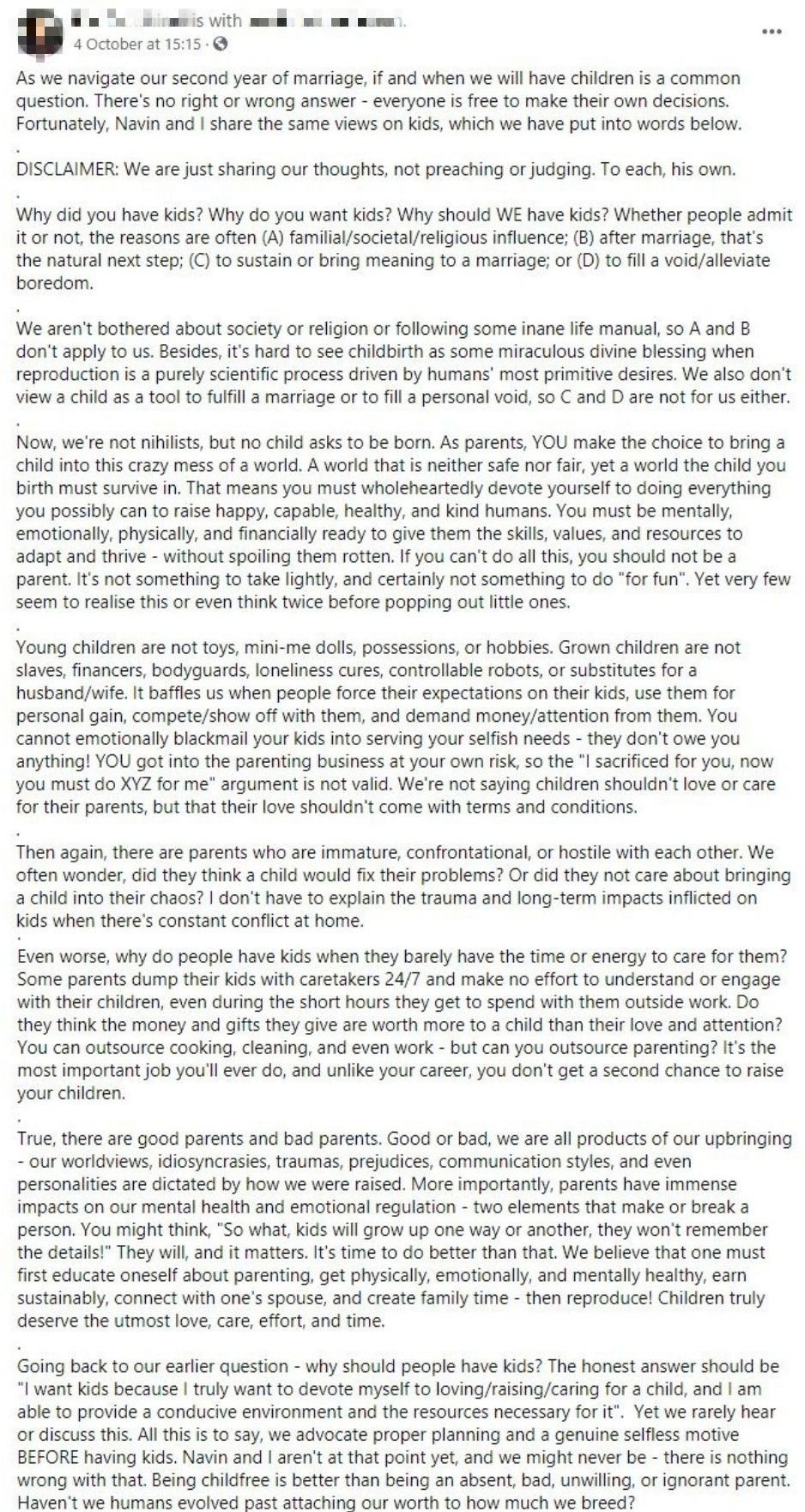 Couple believes they’re not ready for kids yet

On Sunday (4 Oct), Ms Risi Daxshinni posted that she was in her 2nd year of marriage.

She and her husband found that they often got questioned about when they will be having children. 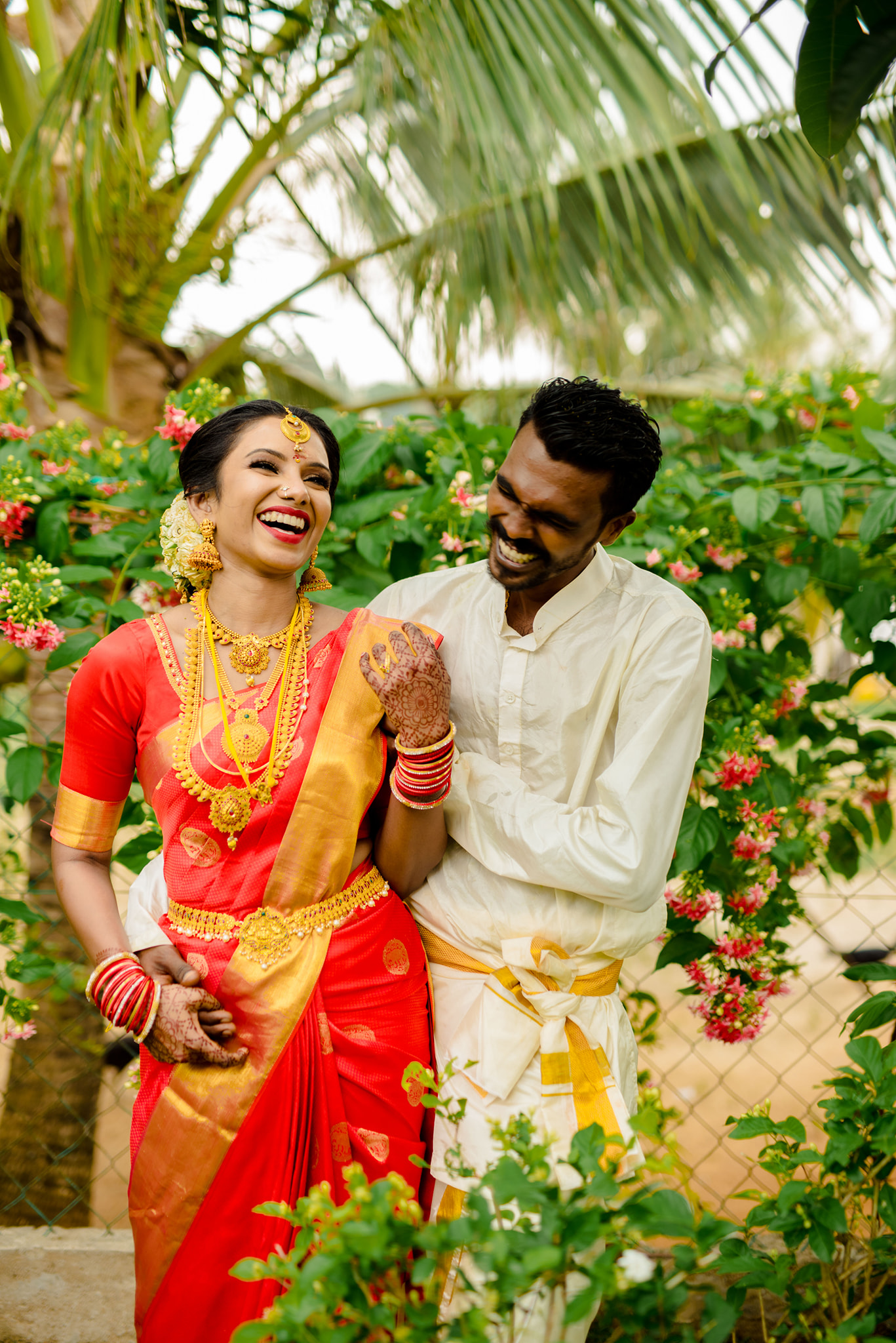 However, the couple share the same views — that they aren’t ready to have children yet.

In fact, they might never be ready — and there’s absolutely nothing wrong with that.

Many have kids for all sorts of reasons

Ms Risi felt that although some won’t admit it, many have kids because:

However, the couple don’t subscribe to any of these reasons.

Having children is a choice

Rather, Ms Risi feels that having children is an intentional choice that parents make.

By making the choice to bring a child into a messy world that he or she must survive in, you need to commit yourself to ensuring that child becomes a human being that’s “happy, capable, healthy, and kind”.

Hence, parents themselves need to be mentally, emotionally, physically and financially capable of doing so.

And they need to beware of spoiling their kids too.

Don’t be a parent if you’re not capable

If you think that’s not possible, then you should not be a parent, she says.

If you can’t commit, think twice about having kids.

Yet very few seem to realise this before popping out offspring. 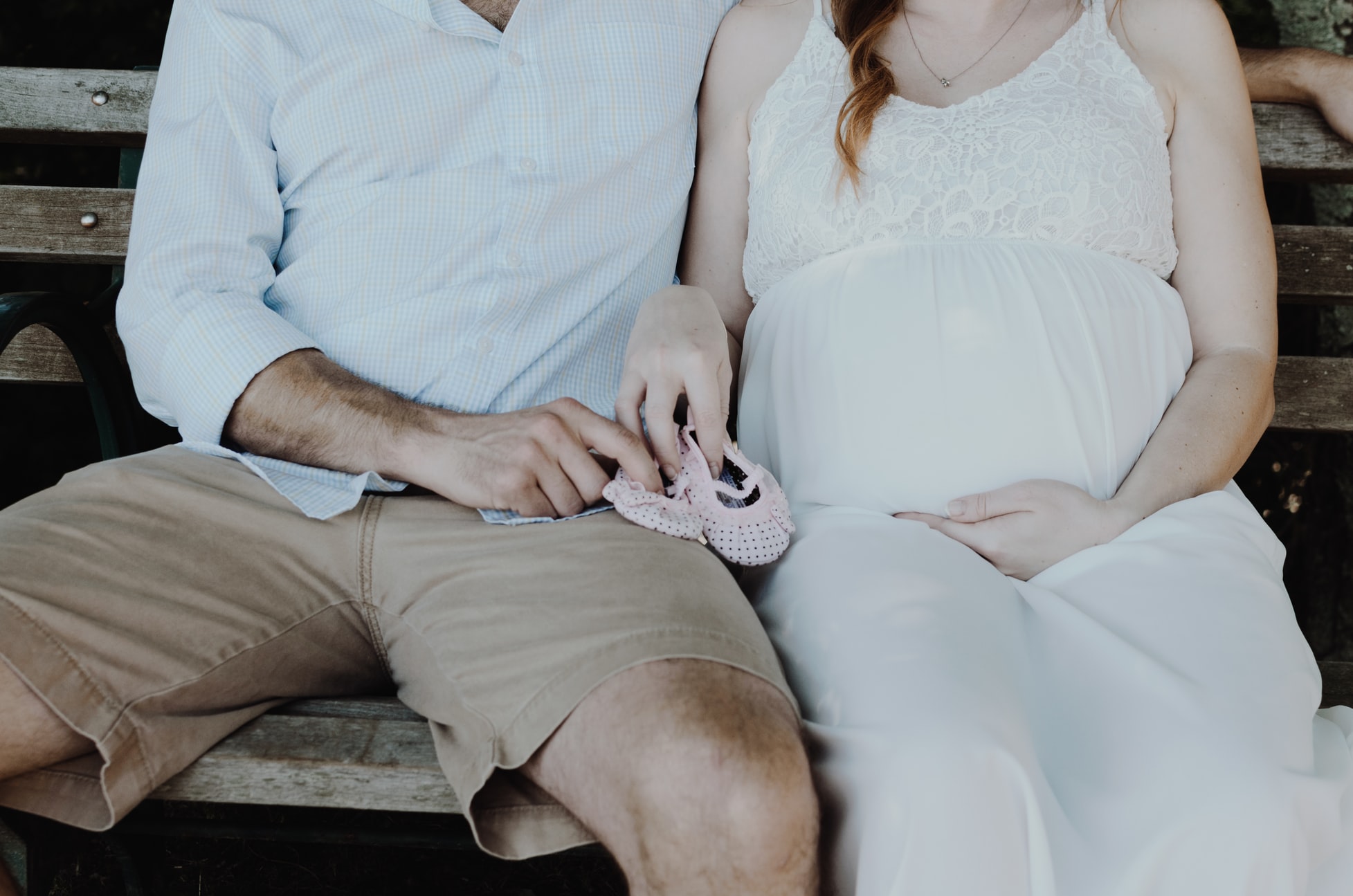 Parent’s love should be unconditional

People also tend to have children for selfish reasons like sustaining a marriage or so their children can support them in future, Ms Risi says.

She’s strongly against this, saying young children are not hobbies or possessions. Grown children aren’t slaves or financial providers to their parents either.

She also doesn’t think it’s right for people to force their expectations on their kids, show them off or demand money and attention from them when they’ve grown up.

In fact, she feels that children don’t owe parents anything, as it was the parents’ choice to have children at their own risk.

And if a couple doesn’t have a good relationship, they shouldn’t inflict pressure on a child to fix it. In fact, bringing children into an environment of constant conflict could result in trauma for them.

A parent’s sacrifices should come out of their own love and willingness, she says — just as a child’s love and care for parents should come naturally, not with to terms and conditions.

Parenting is the most important job one will ever have

Many young adults are focused on their careers, often leaving their children in the care of others.

However, Risi doesn’t believe it’s acceptable for people to have kids if they do not have the time and energy for them.

Although it takes effort of course, parents should make the effort to understand and engage with their children, even if just for a short time outside of work, she says.

To parents who think giving money and gifts to their kids makes up for it, she says it doesn’t: Nothing is worth more than a parent’s love and attention.

Being a parent will be the most important job one will ever have. And unlike other jobs, there are no second chances. 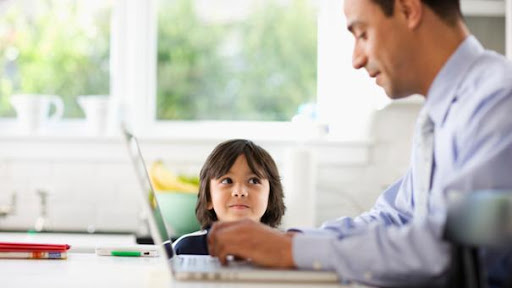 Parenting carries heavy responsibilities and it should be a well-thought-out decision, Ms Risi feels.

After all, how we’re raised influences everything about ourselves, and shapes us for the rest of our lives.

That’s why even though this is seldom said, the only reason why you should have a kid is if you have a genuinely selfless motive, and have planned properly for it.