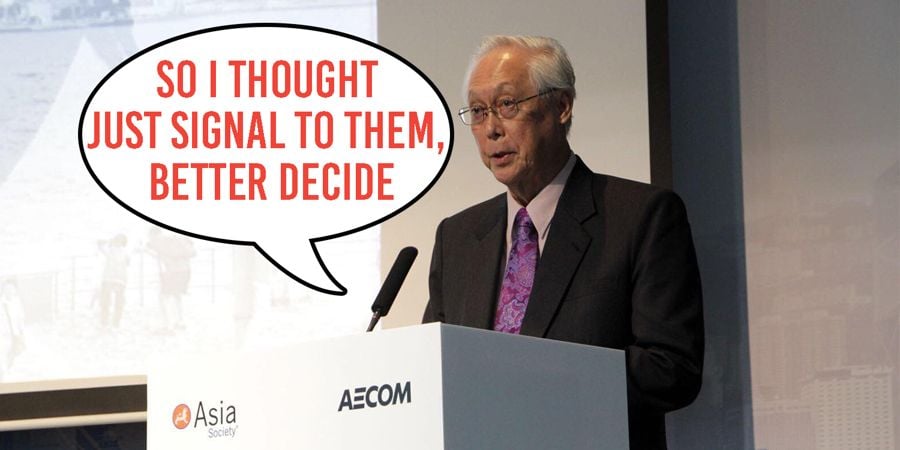 In New Year’s Eve Facebook post, ESM Goh deliberately outlined the “urgent challenge” of choosing a successor to the PAP’s, and Singapore’s, leadership. He urged that the decision should ideally be made in “6 – 9 months’ time.”

With the post came a flurry of speculation that ESM Goh wished to pressure 4th generation (4G) PAP ministers to make their decision.

And look at how it has worked out. Last Thursday (4 Jan), a coalition of 16 ministers released a joint statement, saying that they were “keenly aware” of this “pressing issue.” And will move to appoint their leader – a.k.a. our new Prime Minister (PM) – “in good time”.

Having successfully forced all 4G ministers to address the issue publicly, is it time for ESM Goh to declare Mission Accomplished and ride off into the sunset?

‘My job is done and now I bid you adieu’ – ESM Goh, probably
Source

Not quite. Unfortunately, we’re still left with more questions than answers.

What exactly did ESM Goh say?

“In other words, get on with the task.”

This sentence, among others are quoted from an interview Emeritus Senior Minister (ESM) Goh Chok Tong gave on Saturday (6 Jan) at a youth community event in his own Marine Parade constituency.

You may check out the full video here, or refer to our transcript after the jump.

Here’s a transcript of the interview:

I posted on purpose to elicit the response from the fourth generation and they have given the response, so I have achieved my purpose.

In other words, get on with the task.

Your part you got to play, the part which others got to play. Just get on with it.

Having achieved my purpose, I am not going to go further than that.

Reporter: But for them (the 4th generation leaders) to say “we will choose someone in good time” and not directly responding to the 6-9 months time frame…

Which means it can be earlier, it can be later, I don’t know, so I’m not going to question them what does ‘good time’ mean, but the point is that they have responded to the call that they have to decide very quickly.

Otherwise in our nature, normally we don’t want to fight for the post, and they’re not fighting for the post, but they have to decide who should lead them.

That’s the difference between politics between us and other countries. Other countries, they elbow one another. They all move up. but ours are very responsible leaders. (There is) a job to be done, they will do it. But we all do not have sharp elbows to get into that senior position.

So I thought, so just signal to them, better decide.

There’s perhaps a perfectly reasonable explanation for why this exchange of sentiments could not have been done behind closed doors, but maybe we’re not privy to that.

Unfortunately, this statement also seems to show that he has a rather distant relationship with 4G leaders. If ESM Goh could have gotten his point across to 4G leaders in private, it doesn’t make sense why he would choose to his grievances publicly.

You’d think that Mr Goh would be constantly badgered for advice, given that he is a former PM and current ESM.

This issue begs another question: why are the 4G leaders even in this position to begin with? Terms like “first among equals” have been thrown around to explain why there is no clear candidate emerging from the pack.

Another possibility is that maybe they’re all too nice to jostle for the coveted role.

As with any experienced politician, ESM Goh hopes that the 4G leaders can take a leaf out of his book.

When time came to choose his successor, he and his peers quickly settled on then DPM Lee Hsien Loong, who had already been learning the ropes for 14 years.

However, back then, there was a “clear consensus” that PM Lee would be the next one in the hot seat.

Perhaps the delay in announcing the leadership succession comes from the fact that there is no glaringly obvious successor to PM Lee.

While the race seems to have been narrowed down to 3 candidates, neither one stands out as the obvious pick.

Even in their joint statement, the message was one of utter non-commitment. It was the equivalent of an indifferent ‘OK noted’ text from a colleague.

At least it’s not this one-letter mood killer.
Source

The PAP’s belief in leadership renewal means that the leadership has to gel, and that happens only when the leader emerges naturally from the group.

We hope that he has both the capabilities and the tools to succeed in his new post, whoever he is.