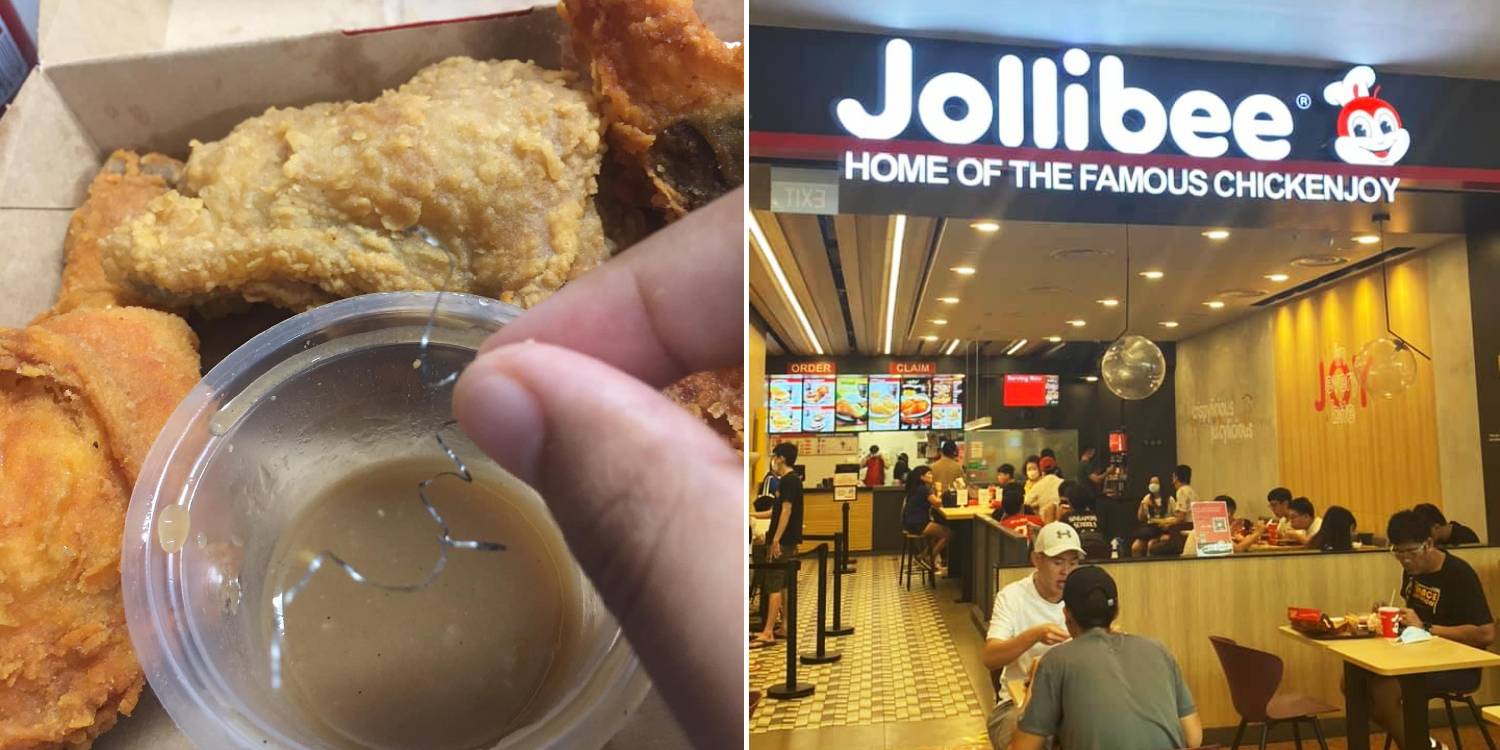 The metal was found as she was finishing her first piece.

Despite a myriad of fried chicken options available in Singapore, the Philippines’ foremost fast food chain, Jollibee, still found its way into many locals’ hearts and stomachs.

But the food establishment recently came under the scrutiny of netizens after a customer found a metal piece in her gravy.

In a Facebook post by Ms Ang Su in Complaint Singapore on Wednesday (21 Apr), she was midway through her first piece of fried chicken from Jollibee when she found a piece of metal in her gravy. 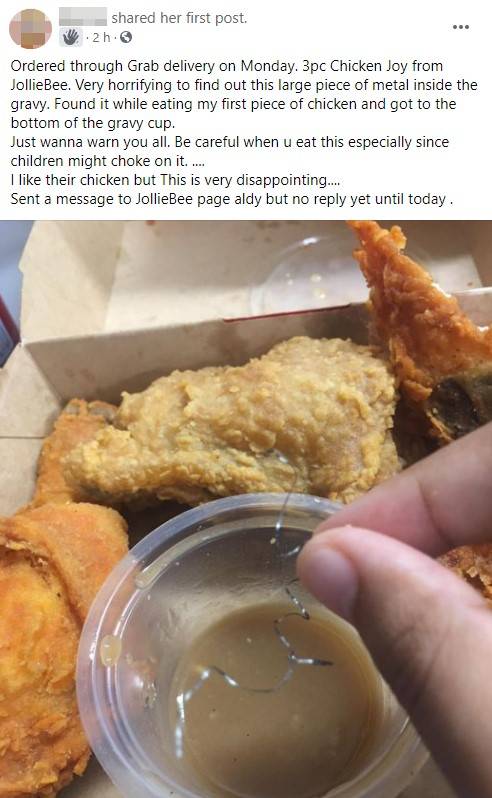 In response to enquiries by MS News, Jollibee said they’re in contact with the customer to investigate the matter.

According to Ms Ang Su, she ordered a 3-piece meal from Jollibee’s Jurong Point branch using GrabFood on Monday (19 Apr). 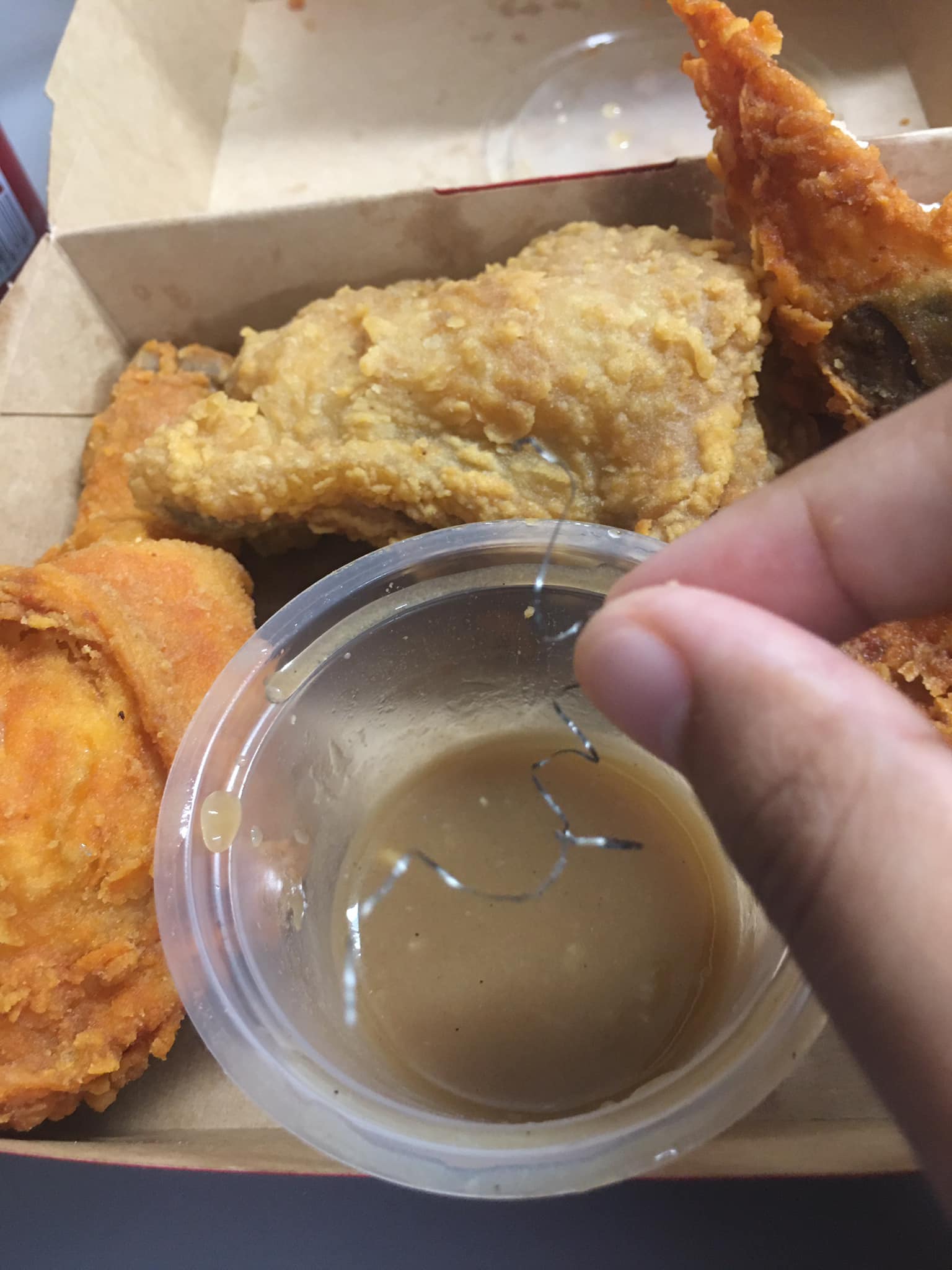 Much to her surprise, she found a piece of metal in her gravy while consuming her first piece of fried chicken.

Although she contacted Jollibee on 19 Apr, she claims that she only received a response today (21 Apr).

Cautioned public to be mindful when dining out

In a follow-up comment, Ms Ang Su stated that the order came from the Jurong Point outlet. 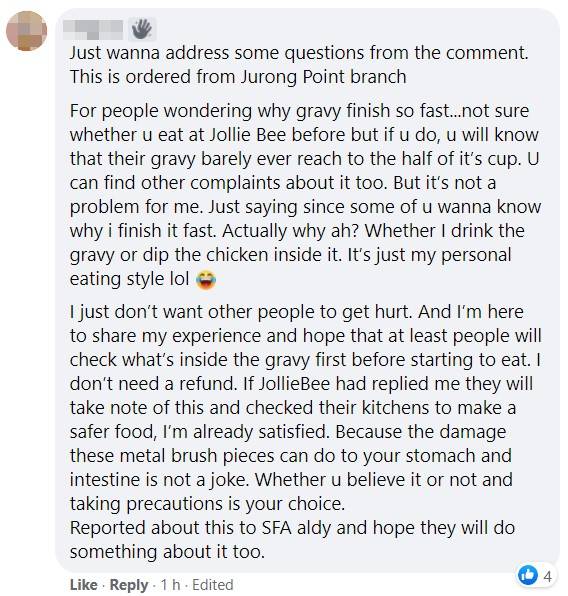 In addition to her grievances, she emphasised that the intention of her post was only to caution the public to check their Jollibee gravy before consumption.

Some netizens had questioned why she’d finished most of her gravy before discovering the piece of metal.

Metal piece look like it came from metal sponge

Many netizens chimed in to say that the metal piece looked like it came from a metal sponge.

For the uninitiated, a metal sponge typically looks like this. This user who works in the food and beverage (F&B) industry said they banned their kitchen staff from using these sponges due to the dangers of using them in a commercial kitchen.

Another one stated that the public should still be mindful whenever consuming food from outside establishments.

In response to MS News enquiries, Jollibee Singapore said that they’re in contact with the customer to investigate the matter.

While food establishments are held to high standards by SFA, one can never be too careful when consuming food that’s been purchased outside.

SFA will suspend operations of any food establishment that accumulates too many demerit points over a 12-month span.

Whatever the circumstances were, we hope that they’ll be looked into thoroughly so that things like this don’t happen again.